*ping*
The tell-tale sound of my e-mail client woke me from my gentle slumber, and I wont lie, I was annoyed: who emails me at 4.45am on a sunday morning?! Regardless, I dragged myself off the sofa, and trundled across the room like a zombie to check the new arrival

We, the board of directors at PSV Eindhoven, would like to invite you to an interview, further to your job application of last week, with a view to you taking over first-team affairs.

The Interview will take place at 1700 hours, on July the 2nd, 2013, at our stadium. We look forward to meeting you

Convinced this was a joke, I shrugged, deleted the email, and went straight back to bed.
Login to Quote

Reports from Phillips Stadion today are suggesting that manager Phillip Cocu has parted ways with his employers, after a term of employment at the club since 2008, as first Under 18s manager, then Assistant Manager, and then Manager.

It is believed that the Dutchman's departure was caused by a rift in the boardroom, thought to be concerning the financial backing he was being given for the coming season; as he did not believe it was adequate for his aspirations, despite the board only asking for European Football to remain at the club.

The Club's vice-captain, Stijn Schaars is also reportedly part of the reason Cocu left, but he is remaining tight-lipped on the situation, insisting that "Phillip and I have not spoken since the end of last season; I was on holiday for the summer, preparing for the season ahead - everything at that time suggested that Phillip would be in charge for that season, but apparently this isn't the case"

Speculation surrounding PSV's next manager is rife, but the favourite is quite surprising: Celta Vigo manager Luis Enrique is thought to be the bookies' favourite for the role, with prices generally sitting around 3/1 for him to be the next manager, while PSV's odds for the title next season are currently sitting at 3/1 with William Hill, down from previous odds of 5-2 last week.
Login to Quote

I closed by browser window, the face of Phillip Cocu at his exit conference still following me around the room...Maybe that em-mail wasn't a joke...I reluctantly pushed myself out of the chair, and stumbled to the kitchen in a half-sleeping stupor. Instinctually, I made a coffee for myself, head in the clouds; Why would PSV want an unproven Englishman as their manager? I'd barely managed to coach Under 15s back home, and i'd only moved here because...well..I dont actually know why I'd moved to Holland, but it must've been for a reason...what if this was that reason?

The sharp click of the kettle boiling brought me back to earth, and, clutching my life-juice, I headed slowly upstairs to start getting ready....3 hours to interview time.

Hesitantly, I answered the call, but before I could even say a word, a gruff voice on the other end started speaking

"Mr Young, your car will be at your home in 3 minutes; I suggest you're ready...the board dont like to be kept waiting
And with that, the call ended. As instructed, I waited outside, and 180 seconds later, a sleek black car turned onto my street, gliding to a halt right in front of me, and the driver opened the door, gesturing for me to enter, which I did.

Once inside, the car was moving almost immediately, and the driver turned to look at me, shaking his head slowly

"So, you're Phillip's replacement are you? Pfft. I've always said the board don't know what they're doing...

I just looked at him, knowing inside that he was right..."I'm just going for an interview..I dont even know where they found me..."

"Just going for an interview? Well yours is the only interview, so i'd probably get used to the fact you're about to be handed a squad of players who don't have a clue who you are

PSV's first-team squad went to work this morning, knowing that they would be training under a totally unknown Englishman, who speaks very little Dutch. London-Born Tony Young, 36, was announced as manager of PSV at 8am this morning on the national news bulletin, and reaction and surprise has travelled through the footballing world like wildfire, although the PSV squad do seem positive.

It was a sentiment echoed all over social media by PSV fans, the majority of whom have voiced support and a willingness to accept the new man at the helm.

We caught up with Potential superstar Zakaria Bakkali to get his take on the squad's feeling after training today
http://images.voetbalprimeur.nl/uploads/news/news-images/2013/09/05/zakaria_bakkali2.jpg
"I'm excited to be working with a new manager, with some fresh ideas, definitely. We know we have a lot of talented players in this squad, and everyone is determined to fight for their place in training and on game days; a new manager is a fresh start for all of us, and nobody is resting on their laurels; it's been made clear to us that nobody is safe.
Login to Quote

Feliks
5 years
good luck mate! good to see the club rallying around you as well
1
Login to Quote

Sources are reporting that PSV are chasing Koln goalkeeper Timo Horn, who could be allowed to leave the club for a bid in the region of £3.8m. The 20 year old German has made a total of 62 league appearances so far for his club, split between the first and reserve teams since 2007.

In 2009, Horn was named as the Player's German u17 Player of the Year, and has been touted as a star of the future by many in the media. While he's not yet been capped at u21 or senior level, it won't be long before Horn makes his impact on a national level.

New PSV Manager Tony Young refused to be drawn on the matter, saying that "I have some transfer targets in mind, but until they are revealed as official club players, there will be no further comment on any speculation.
Login to Quote 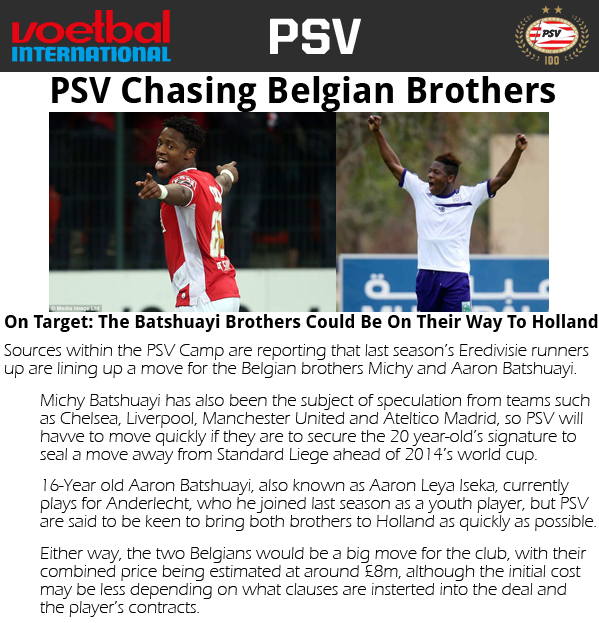 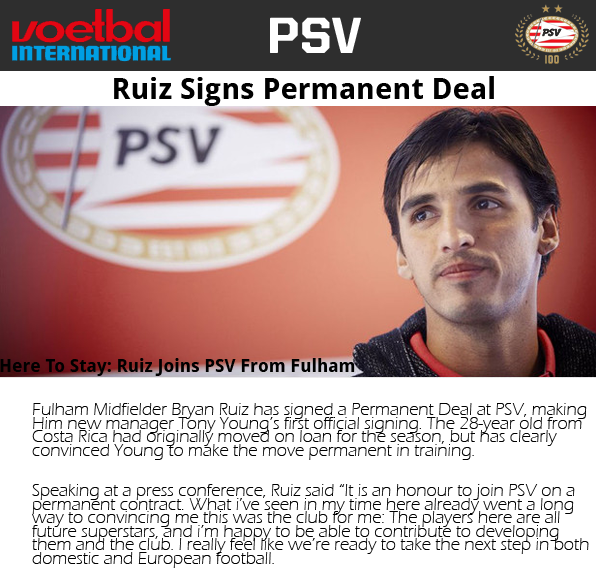 basham97
5 years
8m for the brothers?

Zed
5 years
This is nice. Will definitely follow, as PSV is my favourite club!
Login to Quote

Neal
5 years
I've heard Michy is quite good, haven't really heard much about his brother, though. Permanently signing Ruiz is great!

With a flurry of transfer activity, and the Rumours which have surrounded PSV, with little word of any completed deals since Bryan Ruiz signed on the dotted line, we at Sky Sports have compiled a definitive list of the wheeling and dealing done by new manager Tony Young at Phillips Stadion. Bear in mind though, it's not over till John Motson sings!

Bryan Ruiz (Fulham) £1.7m
Ruiz joins on a permanent deal from former club Fulham, who are said to be reinvesting the money in developing youth players as they battle to remain in the premiership.

Khalid Tadmine (Almere City) £350k
This one came slightly out of left-field, but Tadmine is a striker and winger who looks to have a bright future ahead. Back on loan at Almere, he'll be looking to make an impact and force his way into the squad.

Timo Horn (Koln) £3.8m
Horn moves to Holland after PSV activated his release clause, and he provides welcome competition for Zoet, who will have to up his game to keep his first team spot: a great signing!

Michy Batshuayi (Standard) £6.75m
The young Belgian will be looking to make an immediate impact, but many are considering him as one for the future; definitely a smart piece of business, and another release clause activated.

Aaron Leya Iseka (Anderlect) £2.3m (Rising with conditions)
Joining his brother Michy Batshuayi at the club, Aaron is said to be eager to get his head down and learn from the great players at the club...could this sibling strike partnership become one of the best in the country? Only Time Will tell.

Mario Pugilese (Atlanta) £725k (Pre-Contract Deal)
The young Italian midfielder is a potential star of the future, and with the right experience, could prove to be one of the signings of the season

A multitude of players have moved on loan, but the only cash deal for PSV so far has been the departure of Przemyslaw Tyton, who moved to Lokomotiv Moscow for just over £1m
Login to Quote

You are reading "PSV: The Second Century".