Josh_MU
7 years
I hope I get to play next match.
Login to Quote 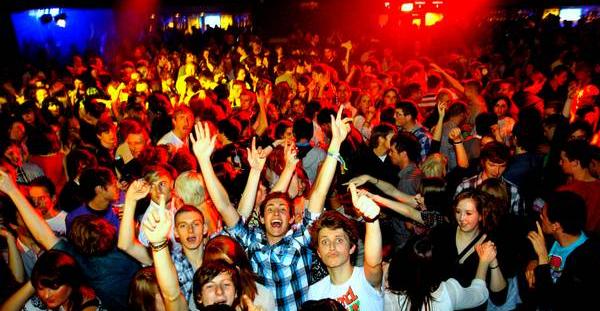 At around 11pm last night, Jeremy Pauker, Josh Slater, Josh Hull and Alfredo Martinez were caught in a club getting drunk by the locals inside, which makes many question the authority that Graham Taylor has over his young squad at FMScout FC.

The four players didn't keep quiet either, as Jeremy Pauker was seen having a fight with another teenager in the club, and both were kicked out by the staff in the area. Whereas Josh Slater and Josh Hull were rumoured to be very drunk and chanting about FMScout FC after they moved out onto the street next to the club. However young Alfredo Martinez was apparently smoking outside with two other members but this cannot be confirmed as of yet.
Jeremy Pauker was also arrested by the police and had to spend the next day in a prison cell due to his brawl with another teenager in the club and the young goalkeeper had injured his right arm in the process of the fight, however as far as we are aware this will not affect the Bolivian.

Graham Taylor has not heard about this however he will be made aware of this after the story reaches social media websites such as Facebook and Twitter. This is not a good start to these young lad's career and it will be interesting to see what Taylor does about this.
Login to Quote

sedsosedso
7 years
Can i download this database?
Login to Quote

pompeyblue
7 years
Haha nice update Josh although I don't think the gaffer will be very happy with us, better not affect our playing time!
Login to Quote 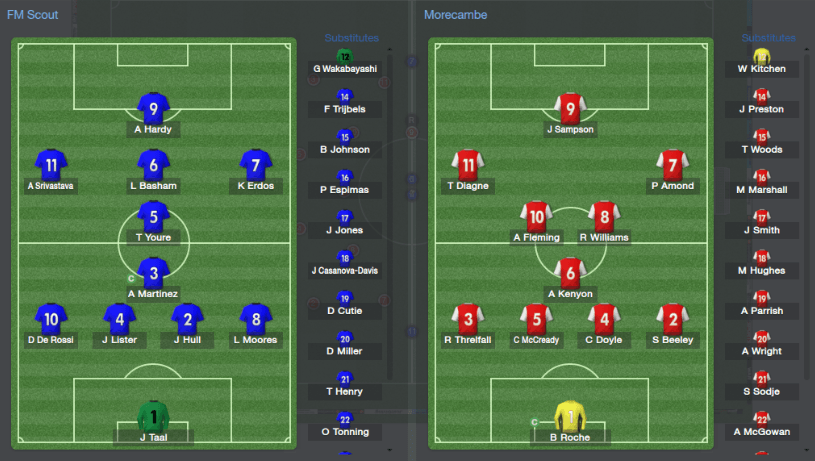 The FM Scout FC contingent that watched their side draw 2-2 with Morecambe at The FM Scout Community Stadium will have been more than pleased with their team's performance in an entertaining friendly which was overshadowed by the evening in a Nightclub.

Goalkeeper Barry Roche suffered the ignominy of scoring a calamitous own goal in the 20th minute after a corner from De Rossi. 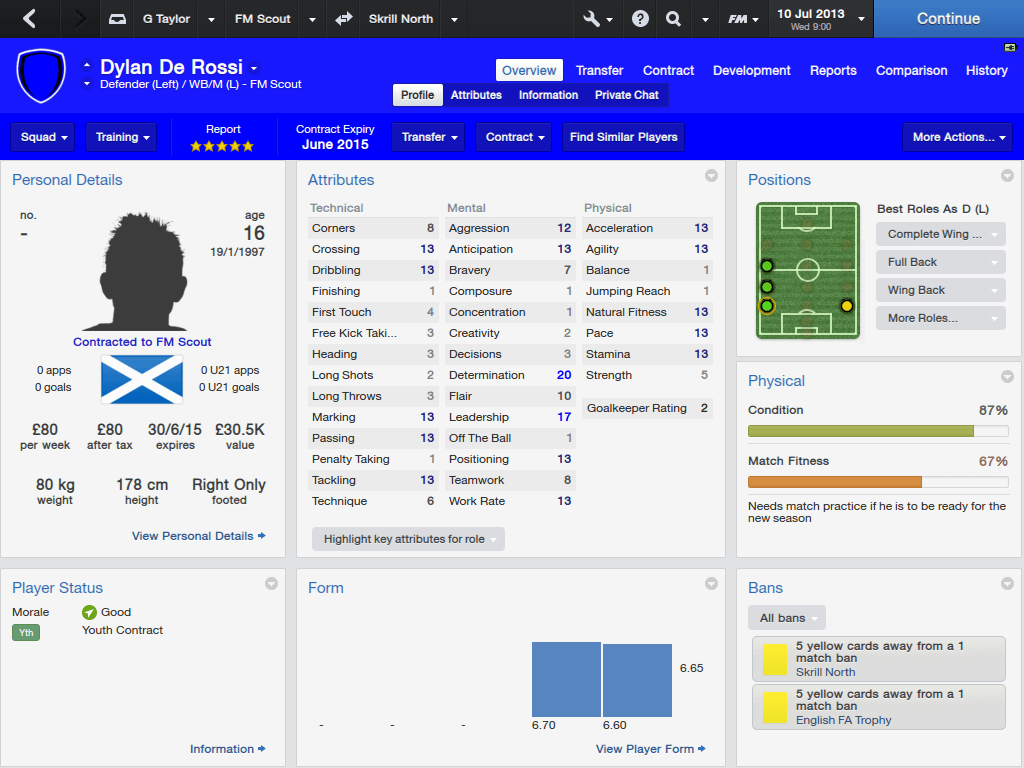 Winger Tony Diagne then equalised for Morecambe in the 33rd minute with a tidy finish from 19 yards out to make it 1-1. 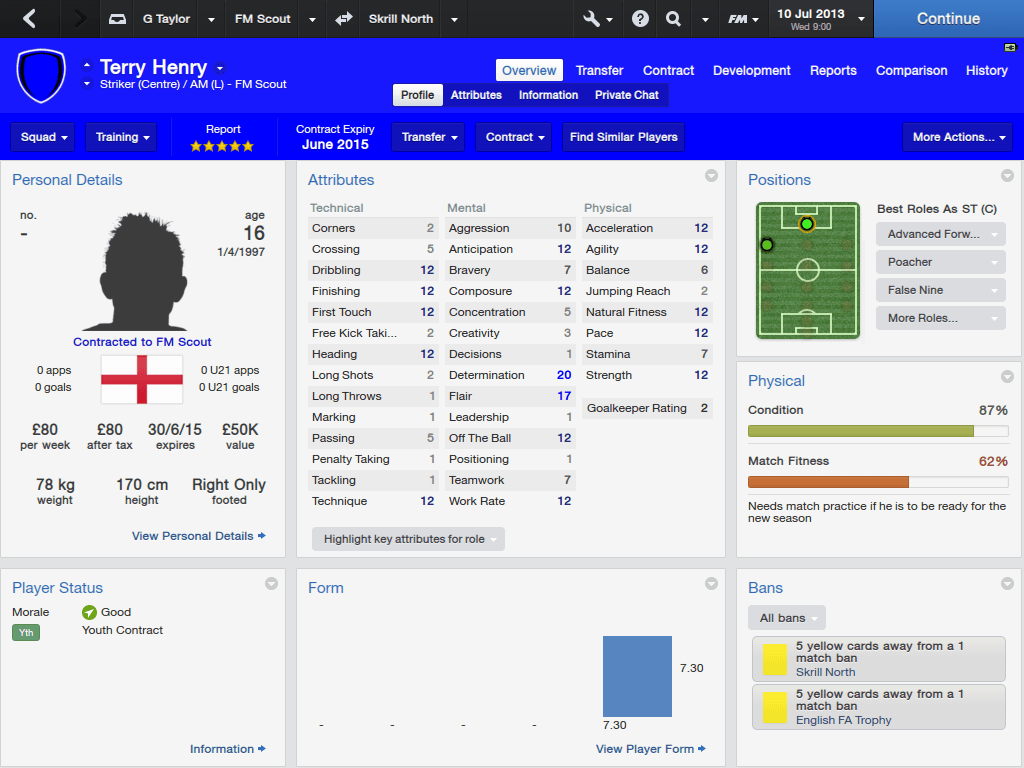 This was a great performance against a side in League 2! Man Of The Match was Terry Henry, who at the moment looks a great shout for a starting slot in the Skrill North.

I have now read the reports and seen the newspapers. Jeremy Pauker and Josh Hull have acted very irresponsibly but will get off with a warning, we feel that Josh Slater was the instigator and will have three more matches added to his already two match ban for fighting. Stam, the Chairman has also fined him FIVE weeks wages. Alfredo was there to try and save them from any punishment before it was too late. I am going to have to sit down with Josh and read him the riot act. He is talented but he is also very rude!
Login to Quote


I arrived 5 minutes early, to see that the squad were arriving at the same time-frame. I called them out to start stretching, as a good portion of the team had already arrived. As the stretching finished, the indomitable Jesus Wagner arrived, 10 minutes.. late. He quickly approached me and said in his thick Brazilian accent,"Sorry Boss, my breakfast took longer than I imagined, and the traffic was tense." I looked at the young attacking midfielder, knowing that he could be key, in both a positive and negative way. I whisper,"Give me 10 laps around the pitch in less than 12 minutes. If this ever happens again, I'll add another lap and take off a minute, capiche?" The youngster nodded and started running.

After Jesus Wagner ran his 10 laps, I set up the team to play a 5 v 5 on small goals. 2 defenders and 3 midfielders, to handle ball control in small areas. The three goalkeepers would train with the strikers, and alternate every shot, whether it went in or was a miss. As I supervised the training, I thought to myself,"Not a shabby start."

We had three goalkeepers, and all of them looked pretty similar. All of them in good shape, incredible reflexes and were safe in set-pieces. However, the full-back position, was another story. We had four right-backs and two left-backs, which meant that many players were not going to play any matches, yet alone make the substitutes bench. As for the centre-back position we only had 4, but, with my enhanced management skills, some right-backs could be shifted to cover for some of the centre-backs.

Out of nowhere, I hear a scream, but a girly scream. I run through the pitch to see one of the right-backs, Josh Slater, grabbing his foot tightly, looking in pain. After some questions, I had learned that the young English right-back had broken his toe-nail. I shrugged it off, and told him to go speak to the physio for treatment. This Josh Slater acted like Louis Tomlinson when he had his debut for Doncaster..

In the midfield department, we were practically covered. There's the talented Peruvian Alfredo Martinez, the hard-tackling Dutch sensation Frans Trijbels and the sneaky Welsh Danny Cutie. If you didn't think we were covered, Justin Casanova, Tata Youre, Kyle Erdos and Randy would all have to fight for their spot, along with the ones listed above. These type of trainings would be essential for every player in the squad, to show who would start in the pre-season friendlies, which were yet to be scheduled. On the wings, we had options, and it would prove to be a good head-ache to think about. Abhinav Srivastava, Garrincha Jr, Pierre Espimas, Odd Sindre Tonning and Rafael Der Silva were all talented, and I had to think about who would play. In the middle, it wasn't too much too think of, Jesus Wagner and Louis Basham would have to fight for a place in the line-up but it was healthy competition.

Finally, we had 4 strikers, in which 2 were Brazilians, [Aaron Hardy and Naveed Tahir) and the other had European descent [Eoin O Raghailligh and Terry Henry]. If we fielded two strikers up top at any time, I'd be pretty sure that I'd put Europeans with Europeans and Brazilians with Brazilians. Ahead of our first friendly, I had no idea how we would line-up, but I was starting to get a closer look at who was technically better in the squad..
Login to Quote

"This Josh Slater acted like Louis Tomlinson when he had his debut for Doncaster.."
Login to Quote

The_Dark_Side
7 years
Jason, did I choose Ireland for my national team?
Login to Quote


It's been a tough start to my career I must say. I thought that this opportunity at FM Scout FC would be an eye-opener to me and allow me to show the World what I'm capable of. But actually, it's done the complete opposite. Banned for my first five matches, every team-mate dislikes me... Life can't get any worse than this.

The chairman despises me, I was treated differently to the others who went to the club with me as they got away lightly, but me? No. I had more bans for the start of the season, but the best thing to do now is to apologise and get my head down and work like a lad my age who had this opportunity would.

I haven't got the chance to show what I'm capable of, my little injury in training didn't help my ego at all, yeah, I broke my toe-nail and screamed like a girl, but it hurt, ALOT. Some of the lads laughed, especially Jeremy, but he seems a nice lad so I hope I can build a good friendship with him. FM Scout FC gave me a chance to show my talents but I've completely screwed up from the start, I need to show everyone that I am a nice person and a very good player.

In training today I felt alone, secluded from the others, they all seemed to move away from me as I was considered a trouble-maker, but they don't understand... they don't understand it at all. The only person who seemed caring enough was Alfredo, as he came over to me and told me to keep my head down and show the others that I am a good player, he also said that he believes in me, it felt as if he was our captain, I wish I had leadership skills like that.

I'm going to show them all what I can do, show them I am a caring player, show them the REAL Josh Slater!
Login to Quote


FM Scout FC overcame a resilient Stockport Sports side in the friendly game at Lambeth Grove Stadium this afternoon. 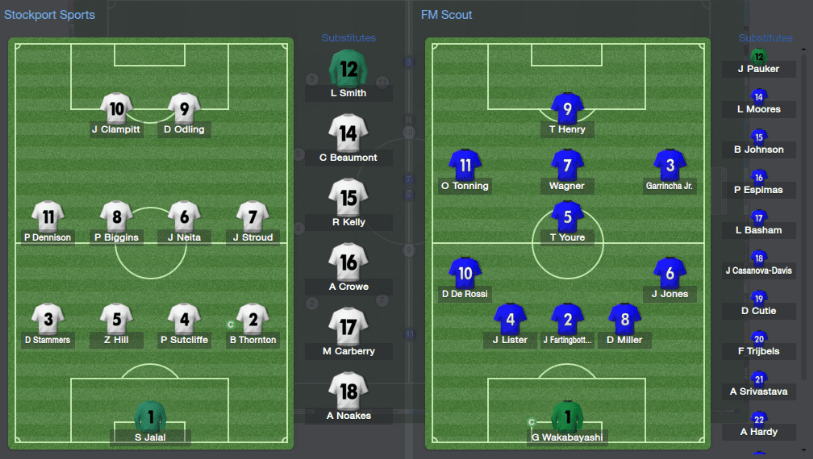 Manager Graham Taylor tried something different this time by having 3 at the back, 2 wing backs, 1 central midfielder and 4 very attacking players.

Jesus Wagner has looked good in pre-season, Garrincha Jr has all the swarve of a Brazilian and Tata Youre, not to be mistaken for Yaya Toure looked good too. 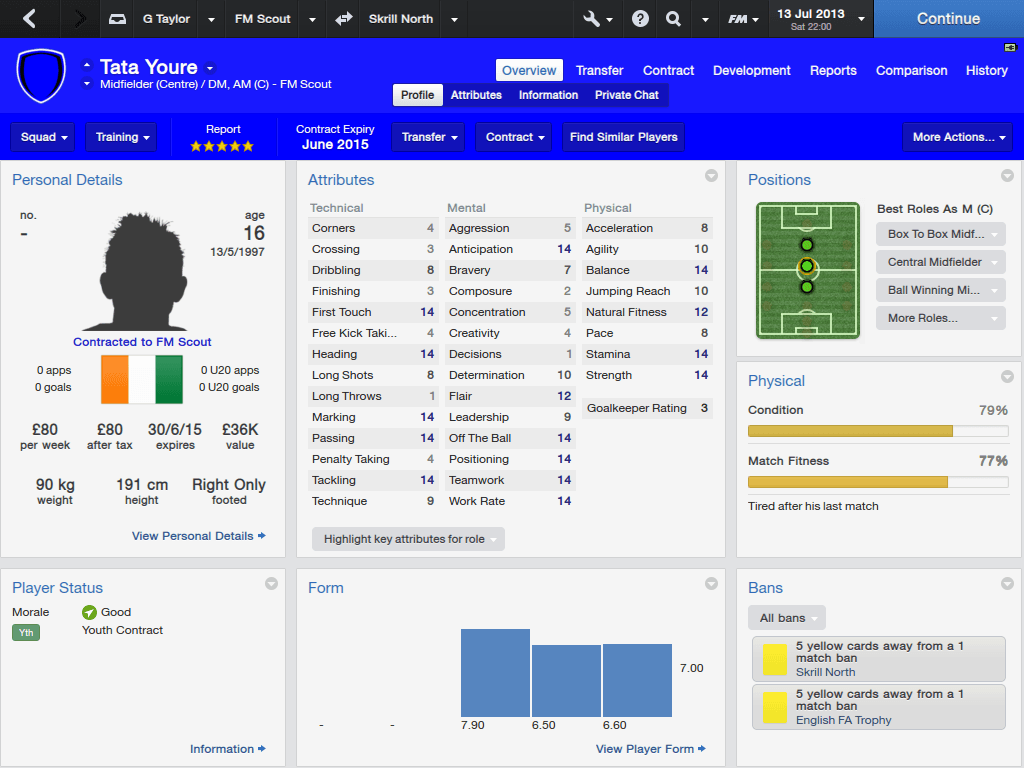 It was infact Garincha who got FM Scout off to a flyer by scoring after just one minute. Henry then scored an offside goal on the 10th minute following good work by Garrincha again. 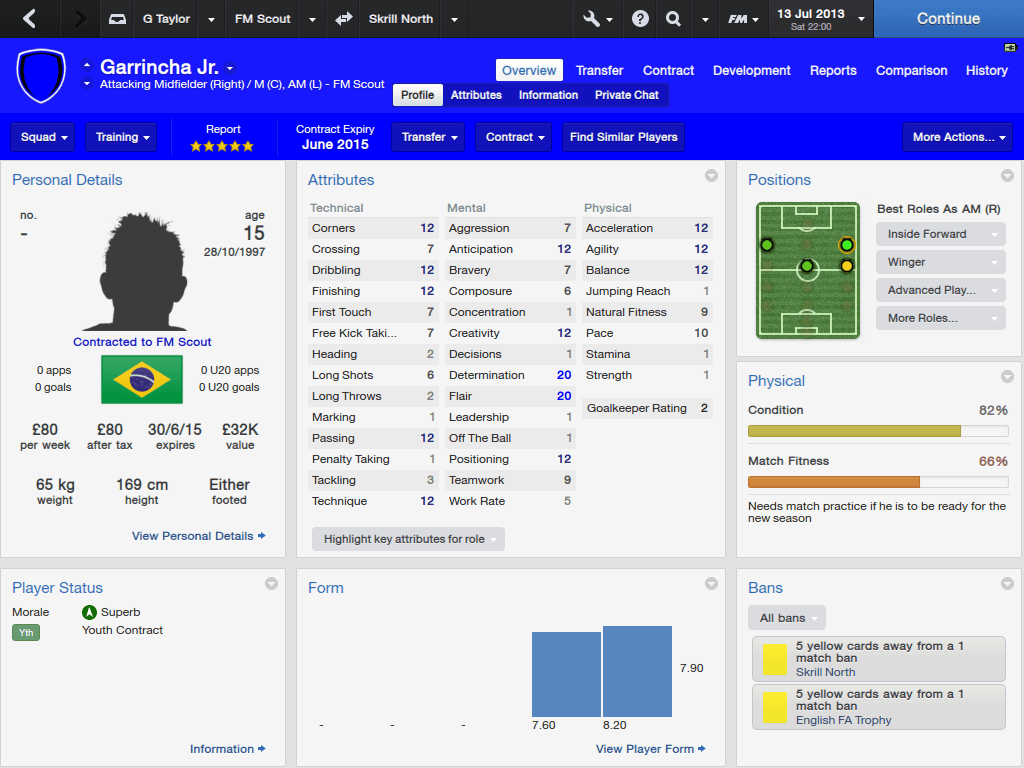 Wagner was hogging the ball a lot and needs to be careful because his selfishness might just get him dropped for the first Skrill North game in a couple of weeks time. Attacking full back Jordi Jones completed the scoring with a real poachers effort from 13 yards on 41 minutes. 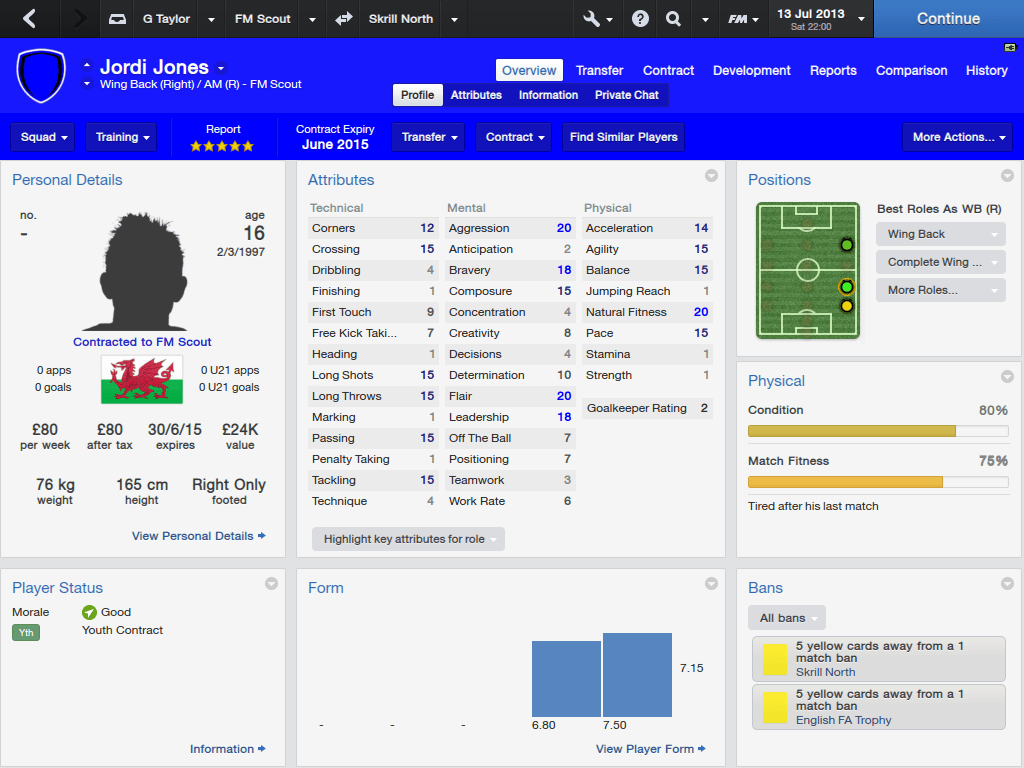 FM Scout were never pressed and the team look like they will be one of the favourites to go up this season.
Login to Quote

dan4rmnaija
7 years
It seems 'sneaky Welsh Danny Cutie' hasn't gotten his opportunity to dazzle and amaze...be prepared to start starting him in every game!
Login to Quote

Feliks
7 years
the son of garrincha is finding his feet!
Login to Quote

You are reading "FM Scout: The Ultimate Challenge".