We at Hyde FC are sad to announce the departure of our manager Scott McNiven, after his 5 years at the club, as he progressed from Player to Manager, bringing through some great players and instilling an excellent team spirit within the squad. The board wish Scott all the best in his future endeavours, and look forward to the next chapter in our history.

I quietly shook my head...why would they get rid of McNiven? he’s done a great job at Hyde, despite them being relegated from the Skrill Premier. I shrugged and went back to my breakfast, fuelling my body for a gruelling day of reading terrible resumes and not calling anyone back...working at a recruitment firm wasn’t the bundle of laughs all the graduates make it out to be.

At my elbow, my phone buzzed. I ignored it though, no doubt it would be a pointless text from one of my friends, probably asking if we’re going for a drink later on...being paralytic didn’t really appeal to me at that moment in time, so I pocketed my phone, and headed for the door.

As I got into my car, my phone buzzed again, more insistent, more urgent, almost. Sighing, I pulled it from my pocket, and looked at the number on the incoming call...It wasn’t one I recognised...Reluctantly, I answered the phone


”Hello? Who is this?
”Ah, Dylan, i’m glad I caught you; I know you must be a busy man...my name is Howard Eggleston, managing director at Hyde FC? I’d like to meet up with you - we have something we need to discuss.
”I...I...yeah! when were you thinking?”
”Well, we’re having our board meeting tomorrow at 4pm; It would be great if we could meet you there? Don’t worry about having to be at work, we’ll take care of that for you.”

With that, the line went dead, and I struggled to regain my composure. In a way, this made sense. Scott and I had been on a few nights out together, and both trained at Oldham back in the day...before I packed it in to go to University in ‘97, right as Scott made his first-team debut. Four years later, with a degree in Sports Studies, I’d graduated with First Class Honours, and gone straight into my recruitment job, working for a faceless man in an office somewhere, who was reaping the rewards of my incredibly dull work.

I shook myself out of my stupor, starting up my car and driving myself to work...mind still reeling, I stepped into the car park, through those big glass doors and made a beeline for my cubicle, only to be waylaid by Graham, my best friend, who was chewing me out for not answering his text earlier, asking if I wanted to get drunk, or high, or something. Shaking my head, I told him i’d catch him at lunch, and went straight to my desk, hoping to find some solace in the piles of poorly-written CVs and pleas for employment.
Just as I stepped out for a cigarette, my phone rang again; the number from earlier. I answered, but before I could even say Hello, the booming voice at the other end of the phone took great pleasure in informing me that ”Tomorrow will just be a formality Dylan; you’ll sign that contract, and we’ll take you to meet the players. It’s just part-time though, so I wouldn’t pack in your job just yet. We’ll be giving you £425 a week until June next year, good?”

Was he joking? This job was a goner!
Login to Quote

Cr7ver
5 years
Good luck mate! I hope that you fulfill your aims here.
1
Login to Quote

InvertedWingbacks
5 years
thanks bro! gonna get another couple updates out today

As I looked out on my new squad, I was shocked. Some of the touch and technique displayed was horrendous, even for a skrill north team...I shook my head, and gathered the lads round. If i was gonna do this, I was gonna go in hard - start as I mean to go on.

”Right. What was I just watching?” I looked around at the faces of my squad.
”Us training, boss! We always warm up with small-sided games” Kristian Cox, a 20 year old right winger...his attitude was terrible too.
”Well, Kristian, how do you think that went for you, huh?”
”Well, nobody could touch me, so pretty well i’d say” An arrogant smirk flashed across his face, and Will Haining, our veteran centreback just shook his head
”Not quite, Kristian. There’s no doubt you can do a couple of stepovers, but your passing was woeful, you don’t pull your weight at all, and you couldn’t hit the side of barn. Hit the showers, i’ll talk to you tomorrow.” A murmur passed through the squad, and Kristian looked furious
”This is bullshit! I’m one of the best players here!”
”No, Kristian, you’re one of the most arrogantt and overconfident, and I don’t have time for that. Bye.”
As he trudged off to the changing rooms, the rest of the squad looked at me, some with admiration, others with nothing but fear.
”Okay, gentlemen. As you’ve probably noticed, this squad as far too big to be financially viable, so i’m going to have to let some of you go; i’m sorry. George, Kelvin, Derryn, Alex, Tommy, Darren, Danny and David? I’m sorry, the chairman’s got your last payslips; good luck”
The players I’d mentioned were quite professional about it all, saying their goodbyes to their team-mates and walking off. I looked at the small group I had left, and Adam Blakeman, our 21 year old left-back piped up…
”Um….boss? we’ve only got one central midfielder now!”
”I know Adam, don’t worry, i’ll sort that. Lets get to work”
Login to Quote

Slid3Tackle
5 years
nice update! looking forward too se what players you will sign!
1
Login to Quote

We’d been training together for a good few weeks now, but I could still sense the unease amongst the squad at the lack of central midfielders...although there was one kid from the youth side who looked like a great prospect, so i’d pulled him up to u21 level to see how he handled that, and as i looked over to their training, he looked like he was running the show. I grinned to myself, and turned about to our training session, watching carefully as the defenders matched themselves to the strikers in a marking exercise. They were doing well, but Tom Collins, our 20 year old striker, was proving to be quite a slippery customer. His finishing wasn’t the best, but he was definitely getting in the right positions, and he’s fast. We had to get him a good supply.
”Right Guys, gather up; that was a great session!”
”But boss, we were only here an hour!” Shaquille Reid, our second leftback, was working his socks off this preseason, trying to oust Adam, so far without success.
”Dont worry Shaq, you’ll get to play more, but first, I would like to introduce some new signings! You guys have been concerned by our lack of central midfielders, but you can relax now” With a grin on my face, I gestured across to our changing rooms, and our 5 new players jogged across to meet their new team-mates.
”Ok, so; lads, meet Matthew Cassidy, Paul Smith, Nathan Rooney, Octavio Magniss-Castro and...Gerard Kinsella” The new players mingled, shook hands and were all wearing massive smiles.
”Hang on...doesn’t Gerard have a global ban for steriod use?!” Ashley Firth, our first choice goalie, looked unimpressed. Shit.
”Yeah, Ash, he does, but he’s testing clean just now, and he’ll train with the Under 21s until that’s passed - it was an oppourtunity I refused to miss out on - He’ll be fine.”
”I hope you’re right boss.”

As the lads mingled, I reflected on Ashley’s words...Steroid use was exactly the thing I hated, but I was hoping to use Gerard as an example of how people can change...
Login to Quote

The day was finally here: my first game in charge of Hyde FC, and we were pitched against FC United of Manchester - A local derby, as it were. In all honesty, I was nervous. I'd watched the boys train for almost a month now, and the new players were all settling in very well...tactically, we weren't the strongest, but they knew the basic idea of what we were trying to achieve, so, as I'd sat in my office the night before, choosing and re-choosing my team, my nerves were chewing at me; what if we were terrible? I shook my head, putting the negativity to one side, and put out what I would have considered to be the players performing the best at the moment in training... 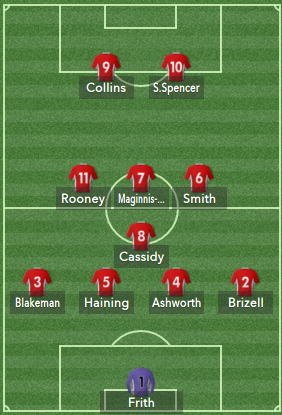 The game itself got off to a blistering start, both sides surging into each others penalty areas, looking threatening and promising much, but the deadlock wasn't broken until the 23rd minute, when Octavio Maginiss-Castro, our newly-signed Mexican cenral midfielder broke through the FC United defence to slot calmly past James Spencer in the United goal.

Tom Collins, our 21-year old striker, added a 2nd goal on 32 minutes, and We looked like we were coasting; our passing was good, we were moving well, and the guys looked composed.
For Six Minutes.

38 minutes in, and FC United pulled a goal back; a defensive slip from Luke Ashworth let Mike Norton in on goal, and he made no mistake against Ashley, lifting the ball over his outstretched hand and into the back of the net.
At half-time, I gathered everyone together, and impressed upon them the importance of staying focussed: we didn't need to go gung-ho in an attempt to score again...we just needed to stay tight and disciplined at the back, and not concede again. It worked. The game closed itself out in the second half, with some good passing moves, and a couple of half-chances, but no more goals. My First game, my First win. It's a good day.

Hyde Causing A Stir In The Skrill

Hyde FC's new manager Dylan De Rossi has certainly wasted no time in making his mark on his new club, with no less than 14 departures from the club, and 7 new faces in the squad, as well as an arduous pre-season campaign for his side, and an apparently short temper at times; does De Rossi know what he's doing, or is he panicking at the amount of responsibility he now has? Below, we look at the club's transfers, and their pre-season schedule coming off the back of their 2-1 win against FC United at the weekend.

Hyde Open their league campaign at Home to Lowestoft on August 17th, and will close their season on April 26th at home to Chester.
Login to Quote

Overall, we had a cracking pre-season; for the most part, our passing and movement was sharp, and the guys really impressed me with how they coped with opponents attacking them, as well as their composure in front of goal. We're starting to look more and more like the finished article that I'm wanting to take into the league season, and that really pleases me. Some of the games brought in a fair amount of cash as well, although we might still need to offload a few players...only time will tell I suppose.

You are reading "Dylan De Rossi: Zero To Hero".