pokarioboy
8 years
Love the kits and the graphics, great job so far!
Login to Quote

Purple Bananaa
8 years
Great so far! Love the kits and hope you get Pogba!
Login to Quote

AlexTHFC
8 years
Toonman8589: That'll be the motto for the next kits, thanks for the idea

Purple Bananaa: Thank you! The kits are great, thank ASR for that, and you're about to see if I get Pogba or not.
Login to Quote

Pictured above is former Juventus star Paul Pogba, who today has been announced as a Manchester Cityplayer for 36m, despite PSG being the favourites to capture the Frenchman's signature.
Man City have confirmed the signing of France forward Paul Pogba after agreeing a deal with Serie A champions Juventus.

Both sides claimed that the deal for the World Cup superstar, who has been capped for the France side many times despite his wonderkid age of 21, is around £36m, with an extra £5m in bonus payments, depending on how well Pogba plays.

Pogba's career started at Le Havre, before moving to now-rivals Manchester United for around £80k, but the Frenchman was deemed surplus to requirements and released.

This was when Juventus picked the player up on a free, and has since scored twelve goals in 63 appearances and been given the title of 2013 Golden Boy and Best Young Player at the FIFA World Cup 2014.

"It comes with great pleasure to announce the signing of Paul Pogba from Juventus for £36m, a player we believe is a legend in the making," the Manchester City official Twitter page said, along with this picture, as they seem to follow the lead of PSG revealing Luciano Vietto via this. 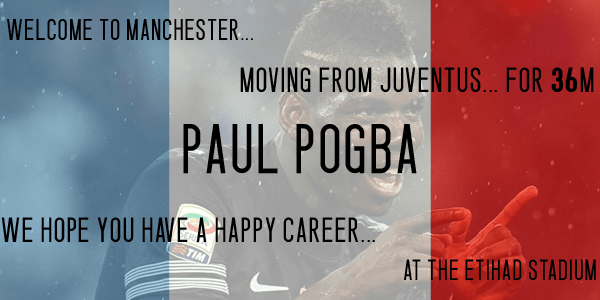 The picture Manchester City's Twitter used to unveil the signing, which is similar to the one PSG used to unveil the signing of Luciano Vietto.
The irony in this is that Pogba was heavily linked with a move to PSG for the exact same fee, and this could well be rubbing salt in the wound of new manager Ronaldinho. However, Les Rouges-et-Bleus won't be too downbeaten as they will undoubtedly begin to search for new players just as good as Pogba.

Pogba arrived in Manchester for a medical on Thursday, and despite it taking two days for the deal to be finally sealed, it is now confirmed that the 21 year-old will play in sky blue next season.

The Frenchman also created interest from clubs like Chelsea, Liverpool, Real Madrid, Monaco and Barcelona, so the Citizens will be delighted that they beat these other European giants to secure the player's signature.

PSG will be looking for a number of players to bring into Parc des Princes, including a right back and possibly a central midfielder, as well as a centre back. Whether any of these positions will be strengthened by the end of the summer is unknown, but it could prove costly if they aren't.

Manchester City announce the signing of Juventus midfielder Paul Pogba, who joins the club for £36m. The Citizens could be rubbing salt into PSG's wound, as they missed out on the Frenchman this summer, by making a graphic to unveil the signing, similar to PSG with Argentinian striker Luciano Vietto. Pogba arrived in Manchester for a medical on Thursday, and two days later, the deal was done, but now attention turns to PSG to see who they sign to replace the rumour.

Tallery
8 years
Unlucky, mate, Pogba would be a great signing!
Login to Quote

AlexTHFC
8 years
Tallery1164: Yeah, shame we lost out on him, but you'll see who we get to be even better

The Famous Elephant: Ikr, it's so annoying

AlexTHFC
8 years
Victoras15: Thank you, the next signing is coming up!

http://forzaitalianfootball.com/wp-content/uploads/2013/02/Florenzi-italy.jpg
Alessandro Florenzi is pictured above. The Italian star has today officially completed a move to French giants Paris Saint-Germain for around £16.75m.
PSG have surprised the world yet again by signing Roma's 22 year-old midfielder Alessandro Florenzi for a fee of £16.75m after missing out on Paul Pogba to Manchester City.

Florenzi, who has played for Roma his entire career so far, is from Italy, and has made a total of 24 appearances in total, including for the Under-20s, Under-21s and senior national teams. He failed to attract the attention of the Italian staff, however, this World Cup, and was left out of the squad to go to Brazil. His nation then failed to make a good impression in the summer campaign as they crashed out in the group stage, with Costa Rica and Uruguay progressing to the next stages.

In a career that began properly in 2010, Florenzi has been a Roma player for those four years, a loan move to fellow Italian side Crotone aside. As a Roma player, he made 73 appearances and scored a total of nine goals, while in his season at Crotone, he became a key player and really shone, scoring eleven in 35 games. For his nation, he has scored a total of six goals, but as a central midfielder, goals aren't everything.

PSG revealed the signing through Twitter, once again, with the accompaniment of a graphic, with this being the words said on the online social networking profile, "We are very glad to announce the signing of Alessandro Florenzi for 16.75m from Roma, and we hope he has a great and happy time in Paris! #WelcomeAlessandro".

This was the picture alongside the graphic, and this continues the trend, most likely set by new manager Ronaldinho, of releasing graphics with every news that comes along from PSG. The signing of Luciano Vietto from Racing Club and the unveiling of the new kits were both announced with graphics, both similarly themed. 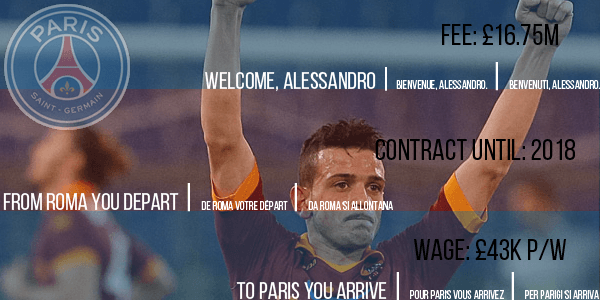 Manchester City appeared to either support or mock the club and the graphical idea as they did the same when they unveiled the signing of PSG target Paul Pogba from Juventus for £36m. However, the idea of posting graphics alongside the good news wasn't as popular for the English club, whether fans saw it insulting to the French giants or they just didn't like the idea in general.

Despite already revealing the signing on Twitter, Ronaldinho spoke about the signing to the press, saying "The signing of Florenzi was always one I wanted to work on, and with the Pogba deal collapsing, I knew it was the right opportunity. I want to bring young players to the club, something I feel they lack at the moment. Of course, there are some great young players, but most of our first team are aged around 26, 27 or 28, and that's slightly worrying."

And the midfielder himself had a few words to say about his new big money deal, that didn't offer him as much money as we'd think. "I've joined PSG and it's a great feeling. I can't wait to work with some great players like Sirigu, Thiago Silva, especially Marco Verratti. We are both young, Italian central midfielders, and I hope we can form some sort of midfield partnership."

Florenzi joins the club on a five year deal on £43k per week, with many players earning more than the youngster, but he seemed to delighted to be joining Les Rouges-et-Bleus to care.

PSG made another shock signing in Alessandro Florenzi, who joined from Roma for a fee of £16.75m. A summary of his career followed, showing he'd only played for Roma and gone to Crotone on loan. Once again, PSG unveiled the signing with a graphic alongside it, but the idea didn't seem the same as it did after Manchester City used it for the same purpose, perhaps to spite the French money bags for capturing target Paul Pogba. Manager Ronaldinho said he was looking to bring in some more youngsters to the club, and Florenzi was delighted to be joining.

Neal
8 years
Very nice signing, as a Roma manager I can tell you that Florenzi is a great player. Hope he plays well for you

Aaron
8 years
As a Liverpool Manager who signed Florenzi, I can vouch for Neal's comment. Great player.