Jamesg237
7 years
I don't think Kagawa was never really given a chance at United and good luck to him IRL. A great story that just keeps giving! Keep it up.
Login to Quote

Coxy
7 years
Wow you've done better than LVG did in real life there, £20m for Kagawa!

Josh_MU
7 years
@Xander: Yeah, it's a shame but a really good price for him.

@Neal: Haha, he's been poor this season so far.

@James: Yeah maybe, Moyes did ruin his development sticking out on the wing! Thanks for the praise pal! 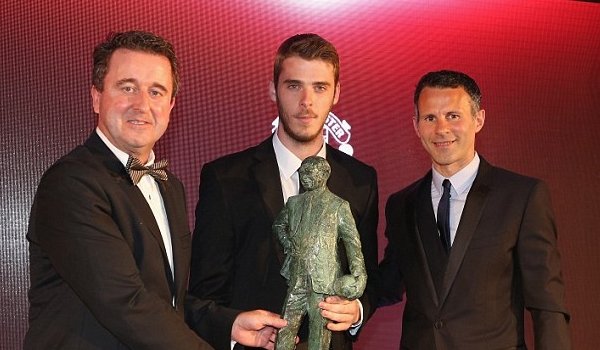 Manchester United's Player of the Year David de Gea has signed a new four year deal keeping him at the club until 2019.

After one of the worst seasons in many years for Manchester United, there wasn't a lot of positives coming out of the 2013/14 except for the emergence of Spanish goalkeeper David de Gea, who won both the Matt Busby and Player of the Year award for his remarkable displays in goal for The Red Devils which didn't go unnoticed by his country of birth, Spain.

de Gea was then called up for the 2014 World Cup but failed to make a single start due to the poor displays from his team-mates which ultimately made Spain go out in the group stage. However, the Spaniard has made Manchester United fans around the World very happy by announcing that he has signed a new four year deal with the club on his official Twitter page, @D_DeGea, saying the following; 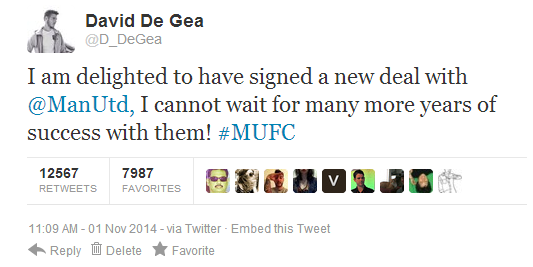 de Gea joined Manchester United in 2011 from Atletico Madrid for an estimated fee of 17.8 million pounds. The young keeper was tasked to fill the boots of retired goalkeeper Edwin van der Saar and in his first season in the red of Manchester, he was hit with a lot of abuse by both rival fans and Manchester United fans alike for some mistakes he had made due to his young age.
However, de Gea started to improve, putting in a memorable display in United's 8-2 victory against Arsenal, saving a van Persie penalty and denying the Dutch forward another couple of goals which gave his side the determination to push on and run out winners. He ended his first season well, getting another 8 clean sheets to make for a decent first season in the Barclays Premier League.

In his next season, de Gea began to flourish making some tremendous saves early on in the season, including a inspiration display against rivals Manchester City, keeping out many shots from both Carlos Tevez and David Silva. His best display at Manchester United was in the UEFA Champions League game against Real Madrid where he made a world class save with his foot to help his side achieve a 1-1 draw against the Spanish giants. 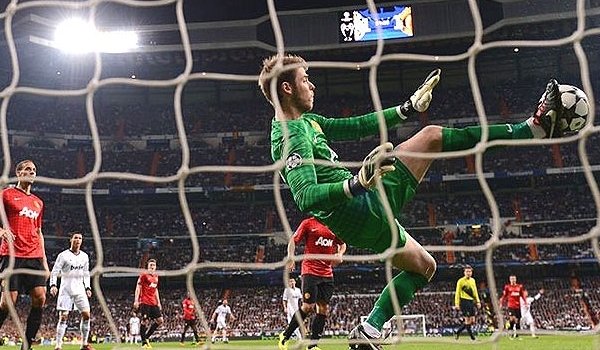 David de Gea's spectacular save in the UEFA Champions League against Real Madrid which was hailed by Sir Alex Ferguson as 'world class'.

This new contract for de Gea has come just in time before United start November with a trip to White Hart Lane where they hope to continue their unbeaten start to the season. Manager Louis van Gaal said the following about David de Gea in the pre-match press conference for the Tottenham game;

"David is a quality goalkeeper, as seen not just in this season, but the previous seasons. He has improved a lot since he joined the club and this new contract shows not only our intent to keep him here for many years, but his intent to stay with us and help us achieve success in these upcoming years. He fully deserves his international call-ups as he is a magnificent goalkeeper."

With de Gea's new contract, back-up goalkeeper Anders Lindegaard looks set to move away from the club to seek first team football as van Gaal shows no intent to play the Dane as he has called up Sam Johnstone to the first team.
Login to Quote

Xander
7 years
Good to see that you have held onto him, he is crucial in all Man U saves. Hopefully we can win tonight with him between the sticks.
Login to Quote

Walter
7 years
I think he's an excellent keeper, nice signing him on for more years.
Login to Quote

InvertedWingbacks
7 years
good move, keeping him at the club: even as a Liverpool fan, I rate him highly
Login to Quote

Feliks
7 years
De Gea, Zemdegs, I like that keeper's name

Great to see him sign on!
Login to Quote

@TaT: Yup, he's a wonderful keeper, improved a lot since he joined.