Cappy13
5 years
I did a few stories before Christmas but most of those are now dead in the water and I can't see myself going back to them. I have already started this save and I am at the end of the January Transfer Window. I did pictures and everything but my PC crashed and I lost all my pictures I had saved up for this story. I will do a few little updates now without pictures and then later today there will be a a few more with pictures from where I am at the moment in time.
Login to Quote

Big U-turn in the run for the next Everton Manager


News coming out of Goodison Park is that Roberto Martinez is not going to become the new Manager at Everton FC after Bill Kenwright made a statement that they could not come to an agreement with Transfer Funds and Season Targets. Martinez was supposedly offer a £15Million Transfer Kitty with £1.2 Million weekly wages available and all the Everton Board where asking for was for the team to qualify for the Europa League either by qualification from League Position or by Qualifying through one of the FA Cups or Capital One Cup.

Kenwright has said that there will be a statement in the coming weeks of the new manager that they have met and he has already signed a contract with the club until the Summer of 2016 with the acceptance he needs to qualify for European Football.
Login to Quote


Unknown Manager Alex Capp has been hired as the new Manager of Everton Football Club. Many people in the Football world are asking what Everton are thinking about hiring a man with no experience of managing a First Team with his only Experience being from a Youth Team coach at Dunstable Town FC and Luton Town FC.

Cappy13
5 years
Just to say I am Half way through December in my Second season but I have pictures of all my fixtures, transfers and final league standings
Login to Quote 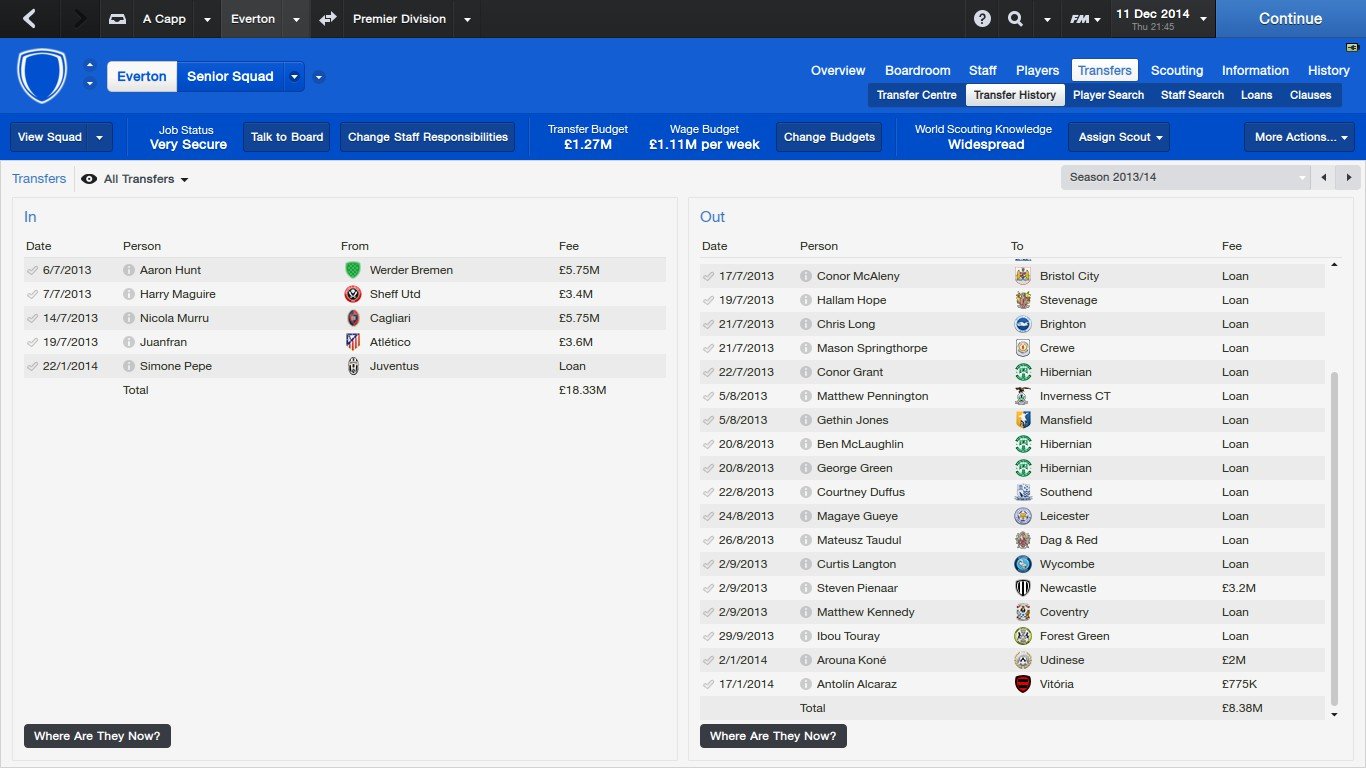 Capp has made a good mix of signings from young good players with potential Like Maguire and Nicola Murru to experienced players like A.Hunt and Juanfran 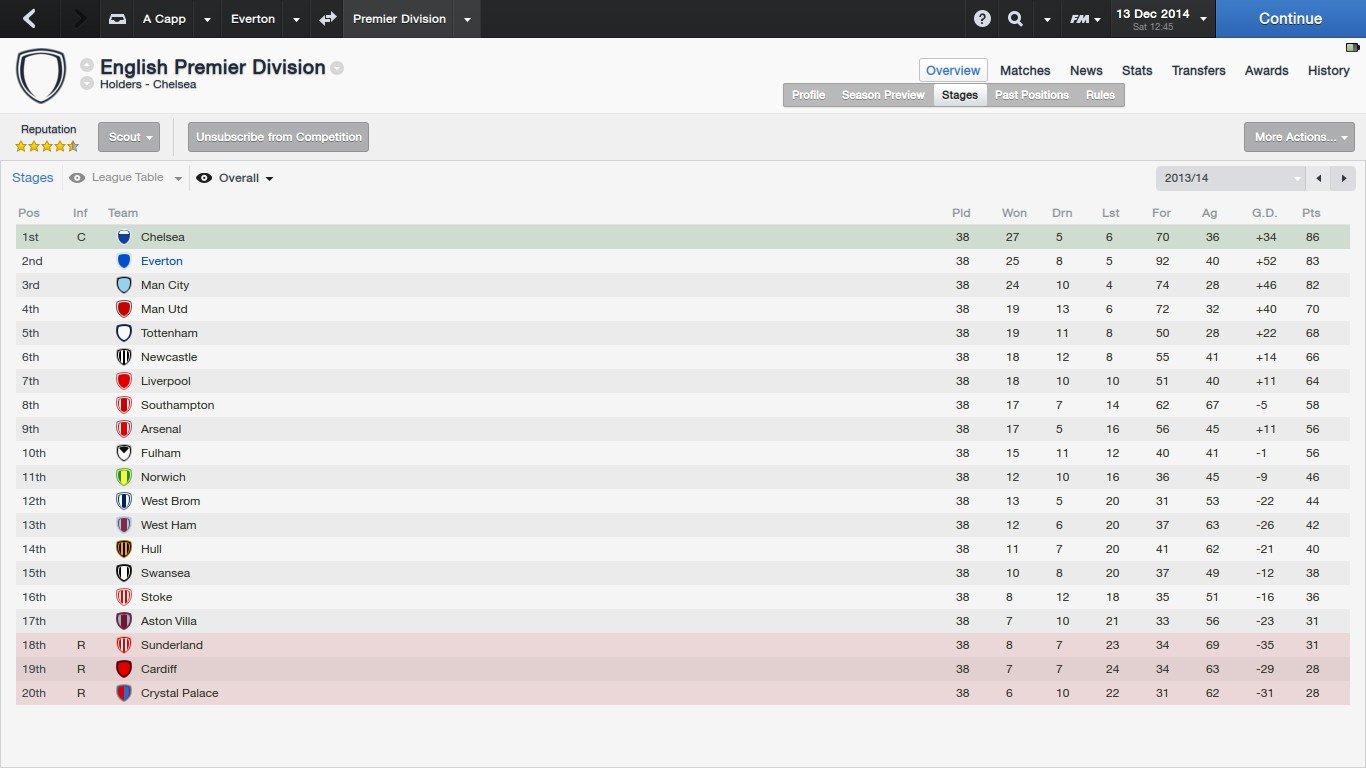 Capp's men have proven many pundits of football wrong with their performance in the Premier League this season instead of finishing the predicted 5th and finishing 2nd and also pushing Chelsea all the way for them to win the Title, which means they also beat the board's expectations of qualifying for the Europa League by going one better and getting into the Champions League


Undoubtedly Everton's Top performer has to be Kevin Miralles scoring 19 goals and getting 16 assist's in 34 appearances, with also strong showings from Striker Romelu Lukaku and Ross Barkley in attack with Baines and Jagielka proving to be top performers at the back for Everton
Login to Quote

It was a good pre-season for Everton as they played 5 games won 4 and lost only 1. They started off poorly losing 4-1 to Lyon but then strong performances against Junior, Gladbach and Portadown finishing with a very tasty game away at Besiktas finally winning the game 5-4

Capp had this to say about his team's performance in the Pre-Season:

I am proud of the lads. The guys who where here last season helped me with integrating the new players and helping them understanding my tactics and the way we play. I have been most impressed with Lacazette, Schurrle, Gauld and Miralles in the attacking department with Stones, Coleman and Murru impressing me in the defensive department
Login to Quote 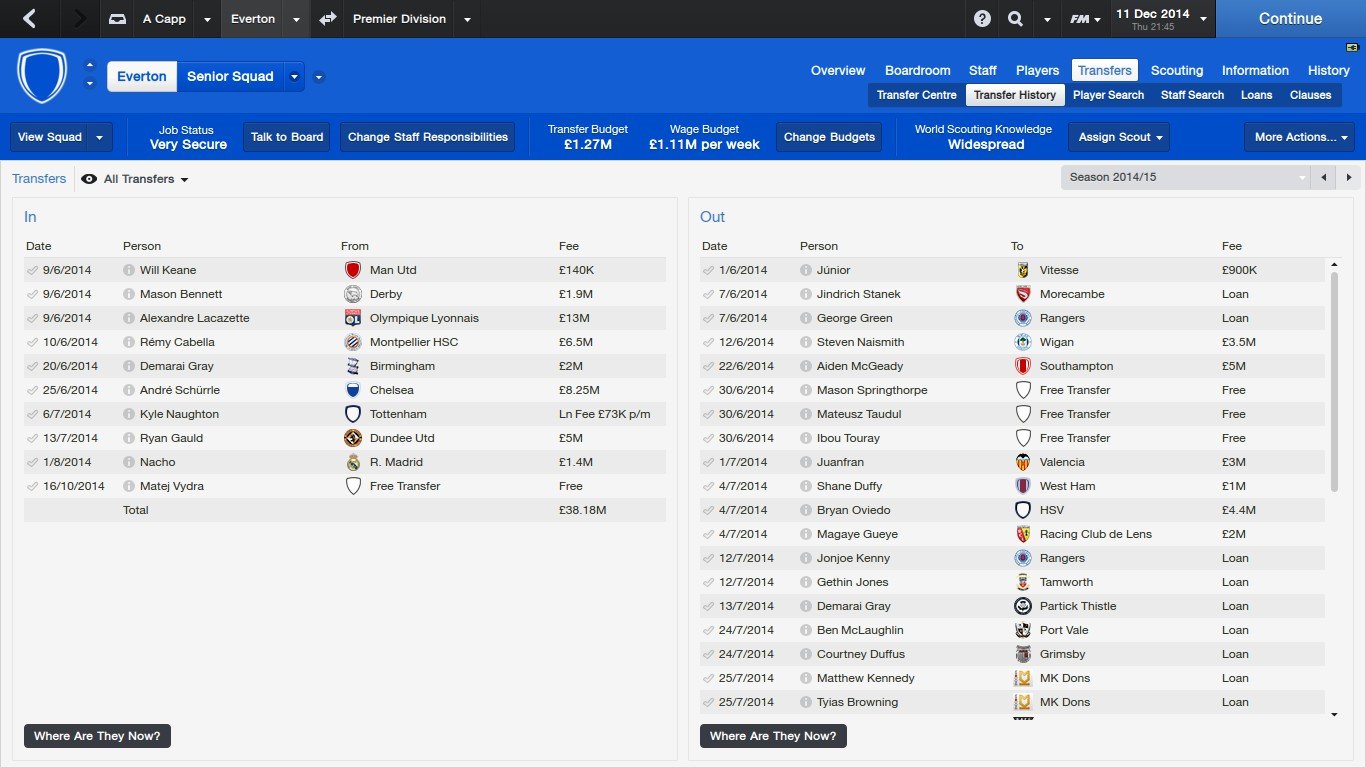 Here at BBC Sport we can bring you a full list of the transfer comings and goings at Everton with our Pundits Alan Shearer, Gary Lineker and Alan Hansen running the rule over them.


Alan Shearer
I feel Capp and the Everton board should be proud of deals they have been able to pull off bringing in some really great young talent being signed in the shape Mason Bennett, Ryan Gauld and Will Keane with also adding some much needed squad depth to be able to handle Champions League football. I do believe they have pulled off a bit of a coup in signing Andre Schurrle from Chelsea after he had a torrid season at Chelsea only making one Substitute Appearance for the Blues. I do feel Capp will regret selling Aiden McGeady and Bryan Oviedo as both players I feel played extremely well last season and think should of been kept.


Gary Lineker
I feel the signing of Lacazette and Schurrle shows a real statement of intent from Alex Capp and the Everton Board that last season was not just a fluke. He has also added some much needed depth not only just in defence but all over the pitch. I do feel he has done well though to keep hold onto some of his most important players in Miralles and Baines and has added more quality.


Alan Hansen
I believe that last season they where thin on the ground in defence but Capp has recognised that and brought in Nacho from Real Madrid who can play anywhere across the back line and also brought in Kyle Naughton in on loan from Tottenham. He has also acquired a player in Andre Schurrle who I feel is a great signing and can add a lot to this very young and talented Everton team
Login to Quote

As it is half way through the season we have a look at how well Everton have been doing this season. They Started off the season with a visit to newly promoted Leicester City and beating them 3-0. Everton have won a lot of games comfortably like Away at QPR or West Brom or at Home to Fulham. There where a lot of highly entertaining games like the 4-3 win at Southmpton or the 3 all Draw at Old Trafford.


Top performers for Everton that have seen them rise to the top of the table are Lacazette, Miralles, Barkley and Schurrle leading the attack. Baines and Coleman have been the leaders of the defence not only defending well but also helping the attack with some great supply of crosses 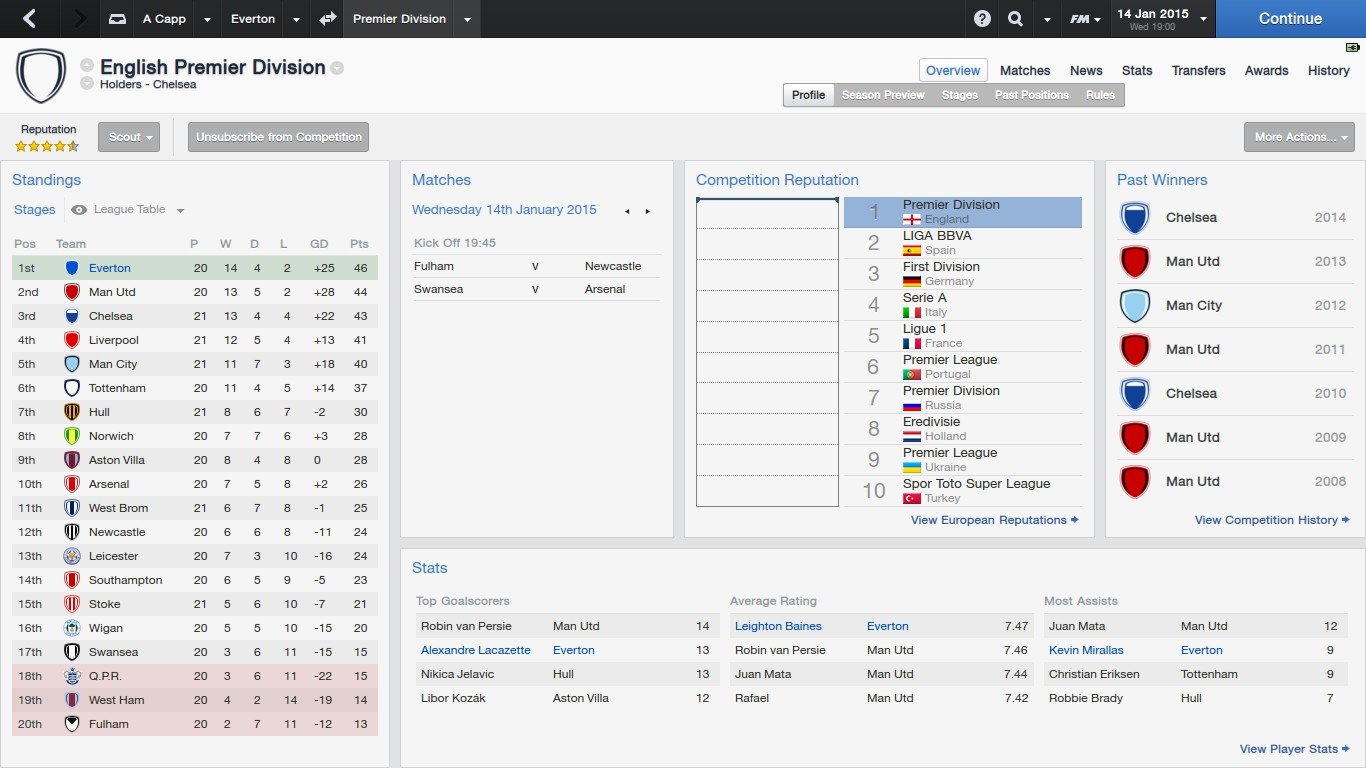 Can Everton hold on to the top spot of the table? Only time will tell
Login to Quote 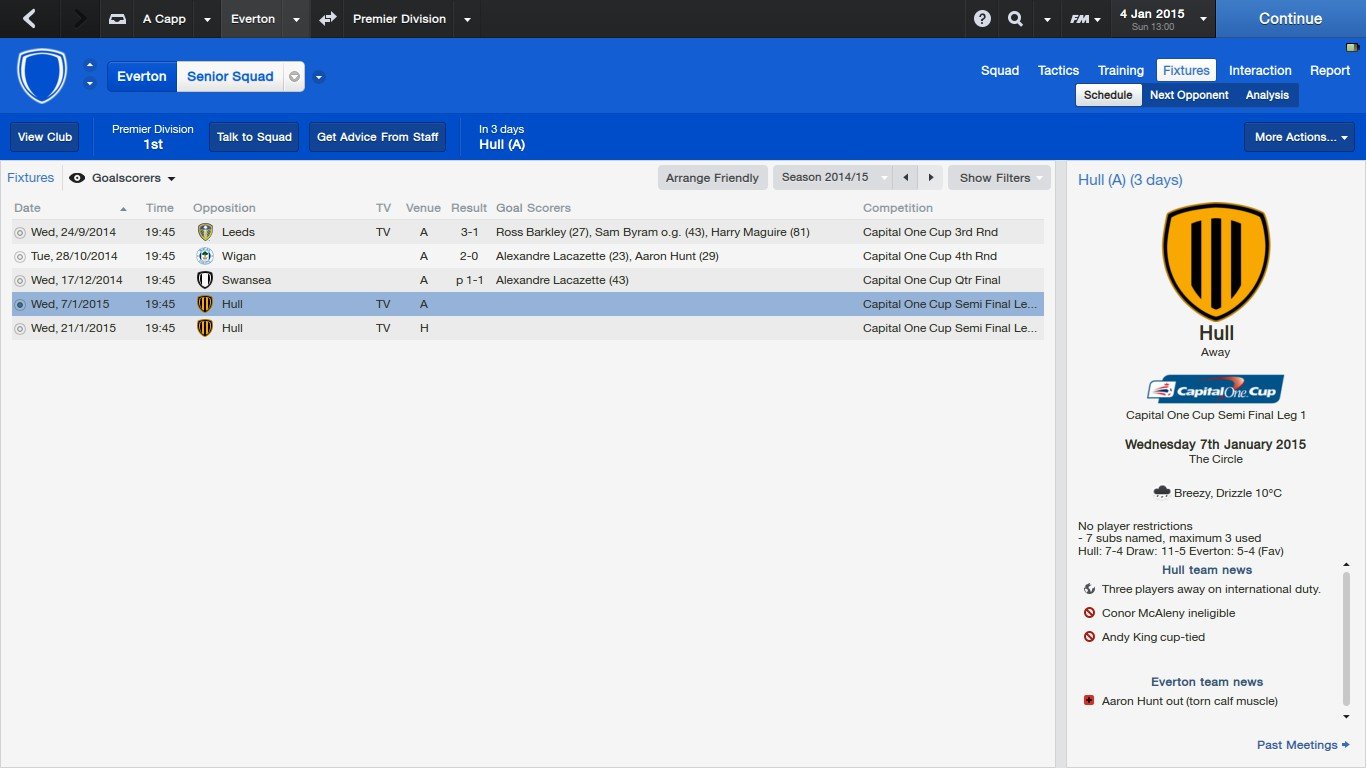 Capp and his players have been performing well in the Capital One Cup reaching the Semi Final and in turn meeting the Boards Expectations, Players like Lacazette and Barkley have been leading this team through difficult games and seem to have a great understanding of eachother

Everton have progressed to the Final to face Manchester City after an very entertaining first leg game at Hull City where Everton won 6-4. Everton then brought the advantage home and put in a dominant, controlling game at Goodison Park winning 1-0 with a goal from Everton striker Lacazette after a great passing move from the team on the counter attack with Lacazette finishing the move off
Login to Quote 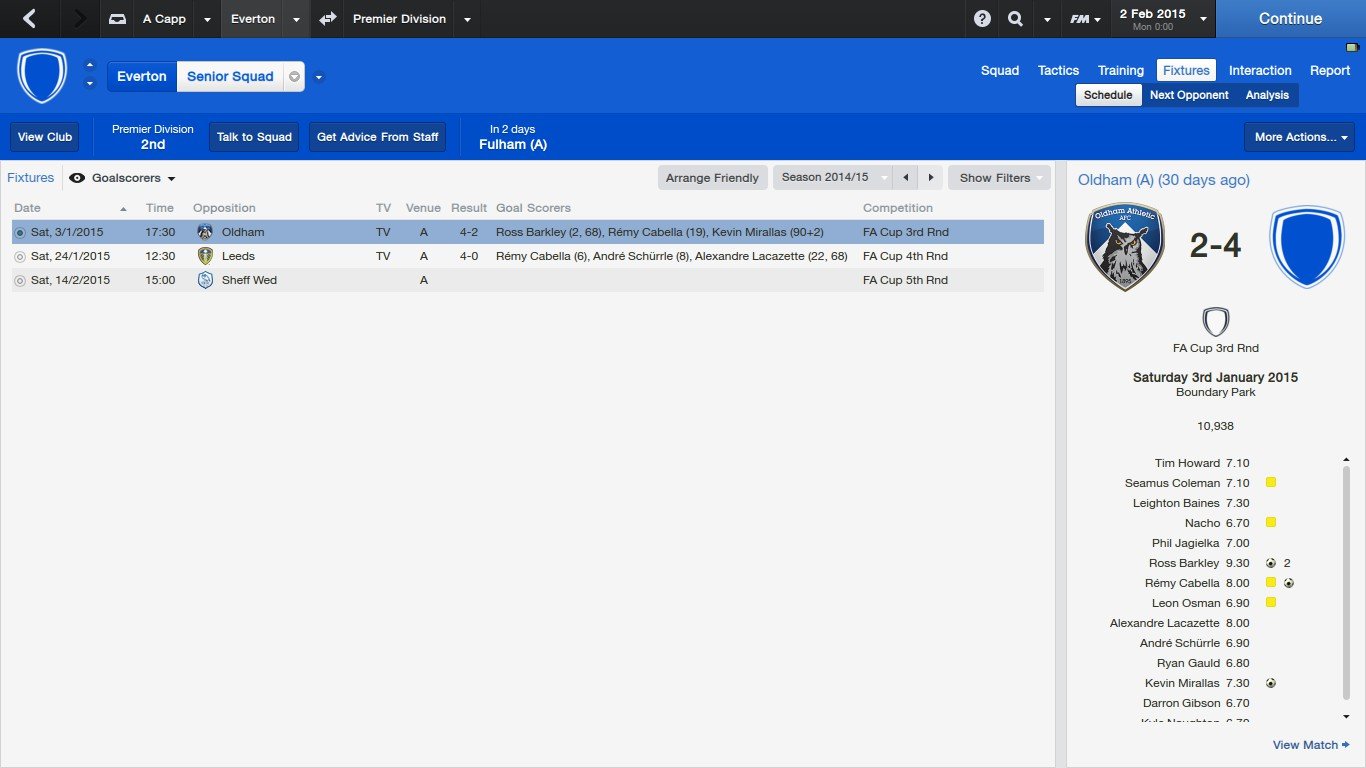 In the two latest rounds of the FA Cup, Everton have progressed well beating Oldham in a tricky affair at Boundry Park drawing 2-2 at half time before Ross Barkley scored with lovely close range finish after lovely ply down the right wing from Miralles and Coleman before Miralles played Barkley through the Middle of the Oldham defence to score. 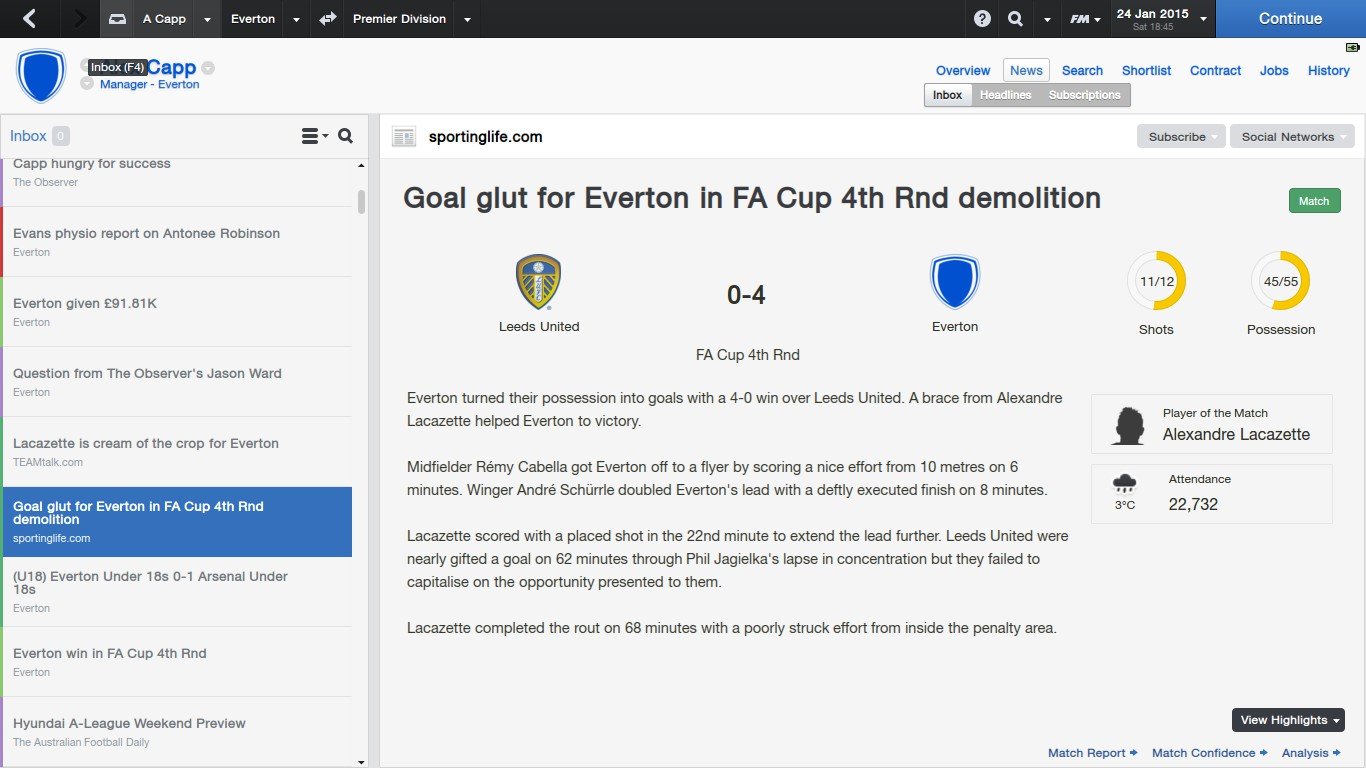 Would like to hear people's suggestions on ways to improve my story?
Login to Quote

You are reading "Everton - Where now after Moyes?".