Considered by many to be THE total footballer, I brought in a new era to my beloved football. I was voted European Player of the Century in 1999 and have won numerous awards. People say that Rijkaard, Guardiola, Laudrup, Wenger, Cantona and Xavi have all been influenced by my style of football. Barcelona and Ajax have developed their academies on my coaching methods. 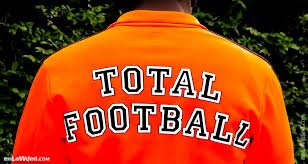 Total Football was created during my years at Ajax. The coach, Rinus Michels honed the style, whilst I remained the on-pitch conductor, making sure spaces were filled and the team’s structure never broke down. Space and the creation of it are central to this philosophy, whilst the player must play the game with his brain. Running around won’t achieve much, but being in the right place at the right time is instrumental to ensuring success. The final present I gave the modern game is the Cruyff turn. Now, in 2014, players can do this with such ease and fluidity it makes me a proud man.

At 67 years old, many would suggest my best years are past me and that I should stick to being a legend of the game. Positions as a consultant and adviser just made me realise my role would never be far from the pitch.I wish it were that easy. This is not just a game it is my life and through everything I have done I have found joy, despair, success and failure. The roller-coaster ride that comes with this life is something one man cannot leave so easily. When Sir Alex Ferguson stepped down, you knew it was with a heavy heart and I do not wish to move out of the game right now. For me, it is calling me stronger than ever.

As the 2013/2014 season has come to an end Frank led de Godenzonen to the title yet again but found himself being called by Tottenham and Southampton, which ultimately led him to stepping down and figuring out what his next move was. As a result, Ajax decided they wanted me back and who am I to say no to an offer as close to my heart as this?! It was time for Johan Cruijff to return to management. 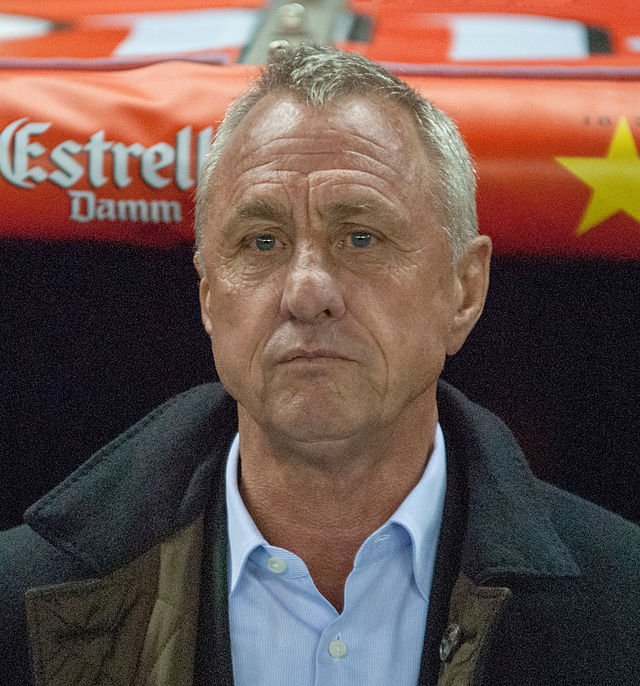 squirmy420
6 years
Great intro! Looks to be a fun read.
1
Login to Quote

Griffo
6 years
I have always wanted to do Ajax and this is exactly how I would do it, I will most definitely be following!
Login to Quote

Griffo - Haha thanks! If you've got any suggestions/anything you want to see, let me know

Pauker - Thanks buddy! Appreciate the follow
Login to Quote

Good To Be Home


Coming back to Ajax, no matter how familiar the club, always makes me excited and nervous. They are the biggest Dutch club around and where it all began for me, making it the most important club in my heart and mind. It’s the end of May 2014 and Frank has left the club after leading them to the title. Walking in to the training ground I knew the quality this place has and I felt like a proud father seeing his baby for the first time. Things have changed, of course they have, but nothing will ever take away from the fact that this is my Ajax. 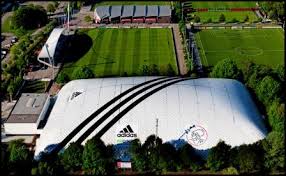 The club have invested in youth here and it shows! The facilities are incredible, with all kinds of pitches and indoor equipment, creating unbelievable talent. Working my way to my new office, the Chairman walked with me and we had a brief meeting. He told me I wouldn’t get a transfer budget, something I couldn’t understand because the club had made money from selling Siem de Jong but I didn’t feel particularly annoyed because the players at the club are of such excellent quality that I feel we can build a great team. Following the meeting, my assistant popped by with a team report and comments from the rest of the staff. I had already done my reading on which coaches we had and told him promptly to dismiss one and to bring in Marco Landucci, René Meulensteen and scout Hans Gillhaus.

Within minutes, the phone rang. It was Evian TG’s manager wanting to discuss the transfer of Illan Boccara, someone I wasn’t too impressed with but he had a release clause of £1.1 million and it was promptly met. Unfortunately, the wage budget was already over the limit and that meant the transfer funds went to eradicate that problem. Frank had done some excellent work in arranging the transfers of youngsters and I could look forward to the arrival of Robert Muric, Richairo Zivkovic and Nick Viergever. A final piece that fell into place for us was the arrival of John Guidetti on loan from Manchester City for the season. He gives us great depth in our squad and will hopefully contribute 10-15 goals. 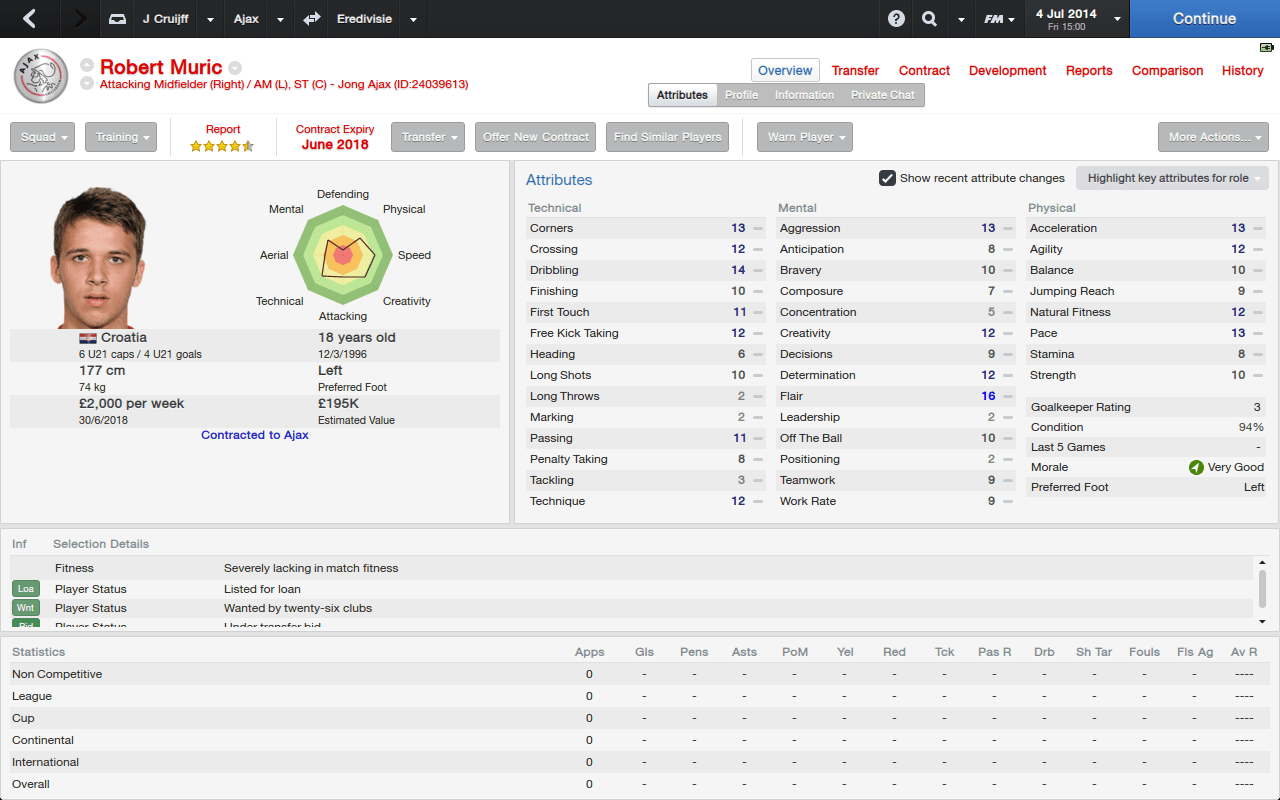 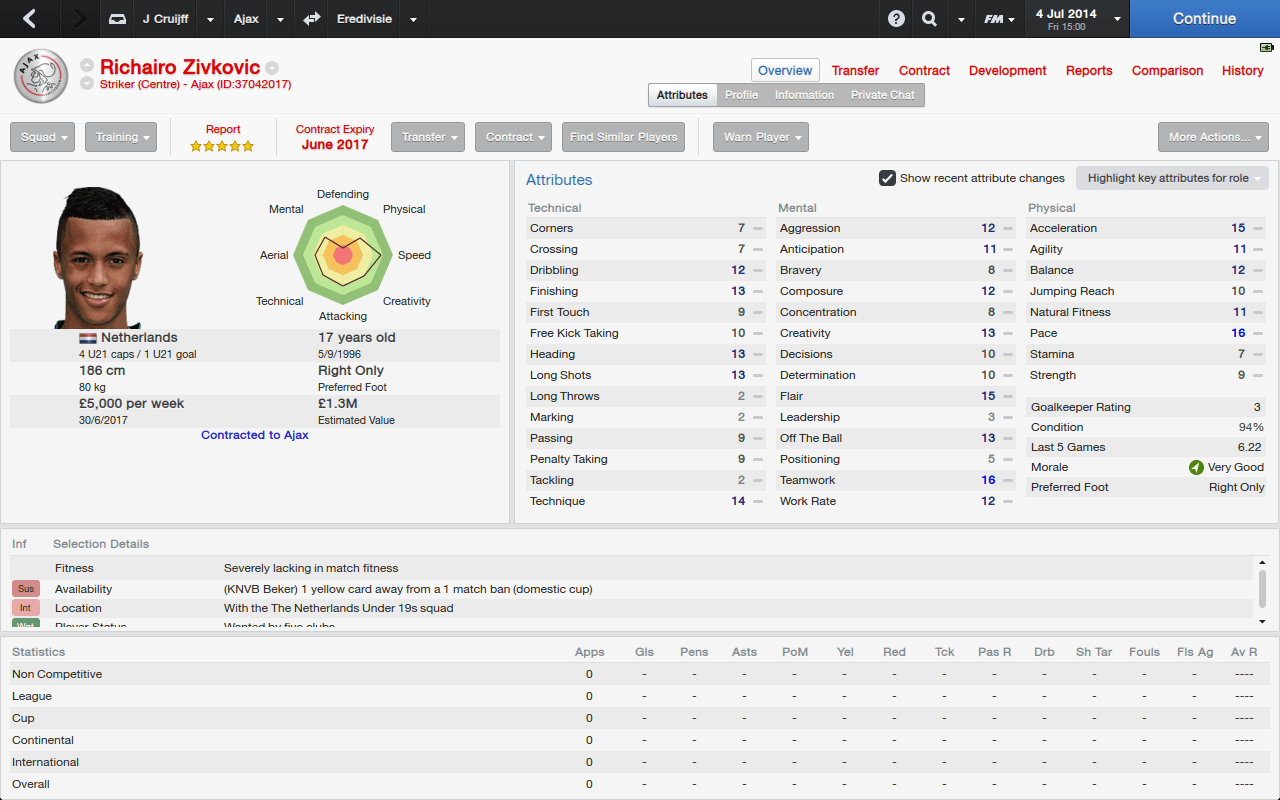 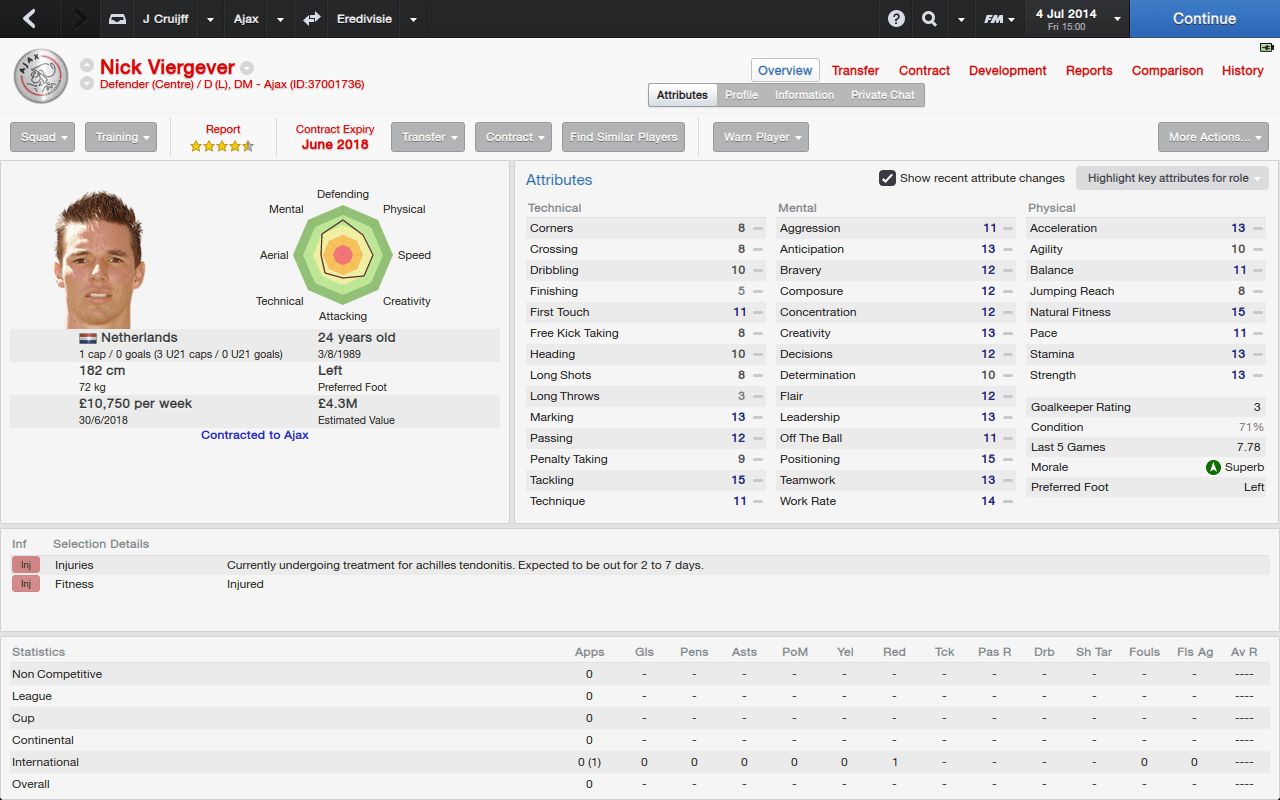 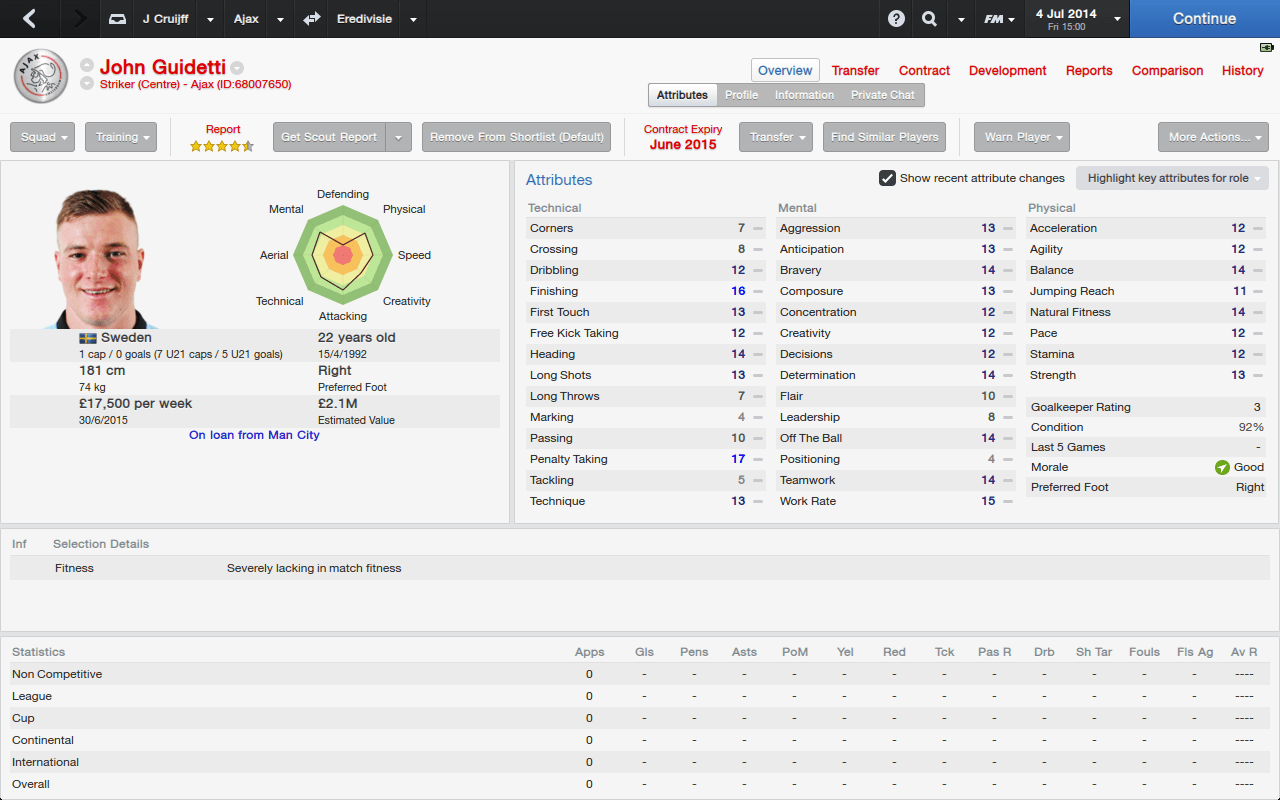 I wasn’t completely satisfied with the quality of the coaching staff but for now, it would do. The transfer budget wont let me bring in any players on permanent deals yet and as a result, I set about working on the squad we already had. Tactics are key to my philosophy, as I already mentioned. Total Football is coming back and I hope we have the players to implement this successfully. Just like my good friend Louis Van Gaal, I see the 5-3-2 formation as an important way of controlling the game whilst being defensively strong and as a result have implemented what I believe to be one of the great modern formations. 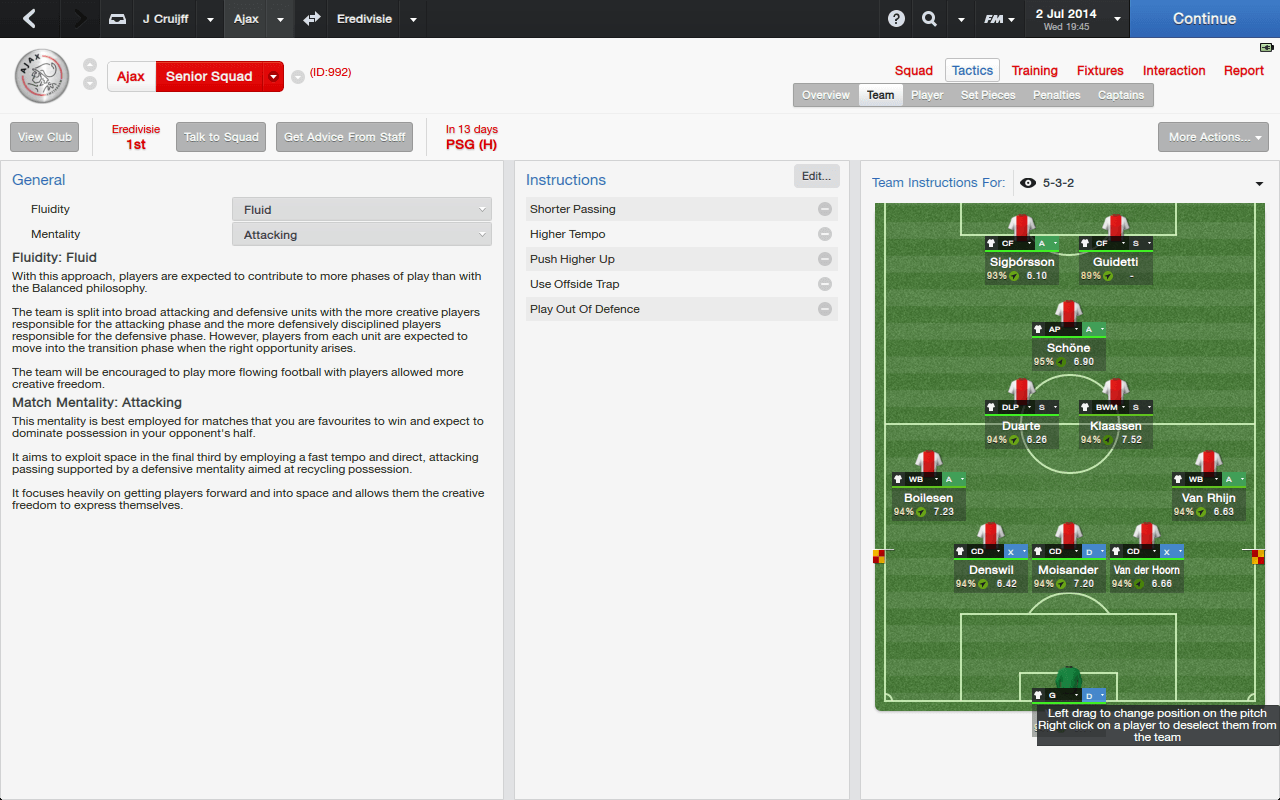 To give us the ability to switch up our tactical approach on the pitch, I also felt as though a 4-4-1-1 formation may give us strength in the middle of the park and allow us to drop deeper when trying to protect a lead. 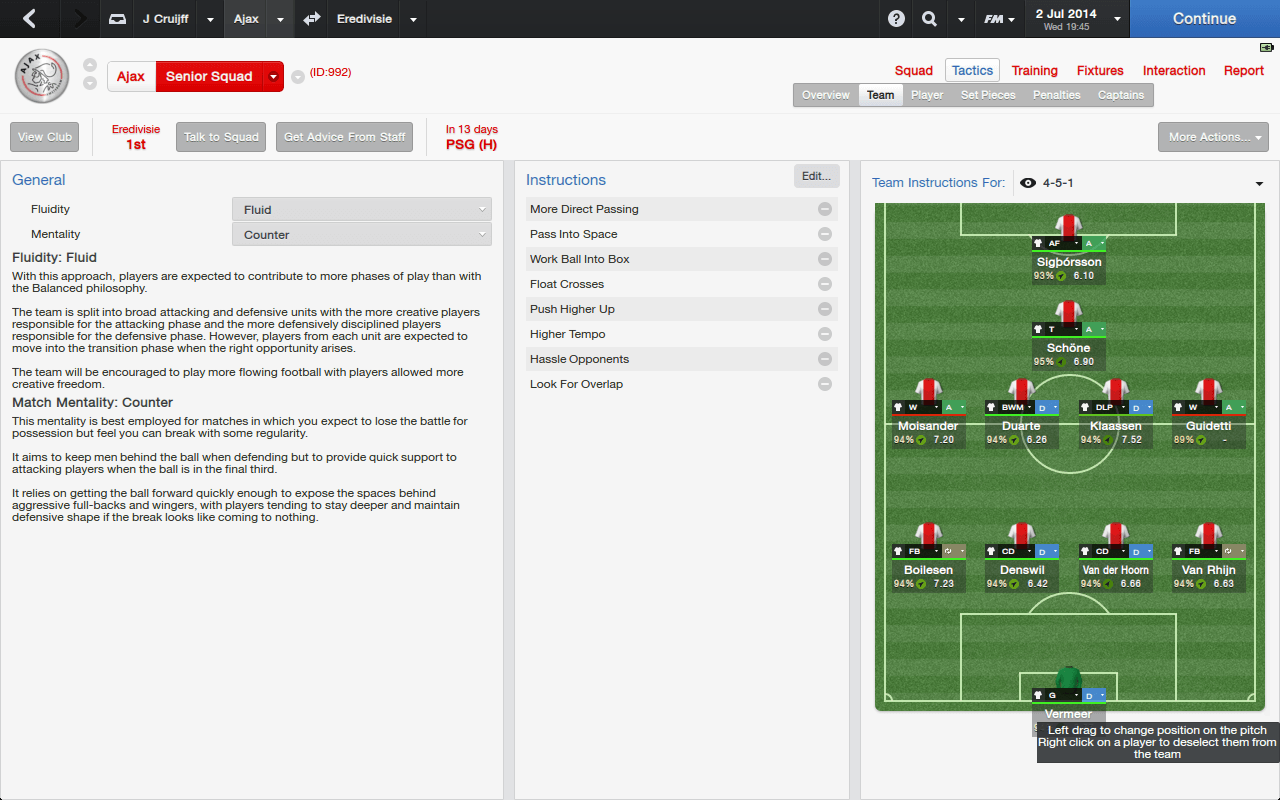 The third and final tactic that has been constructed is the trusty 4-3-3/4-5-1. A staple of Ajax football club and something that you will see many clubs use nowadays, this provides us with defensive steel but also quick attacking outlets. 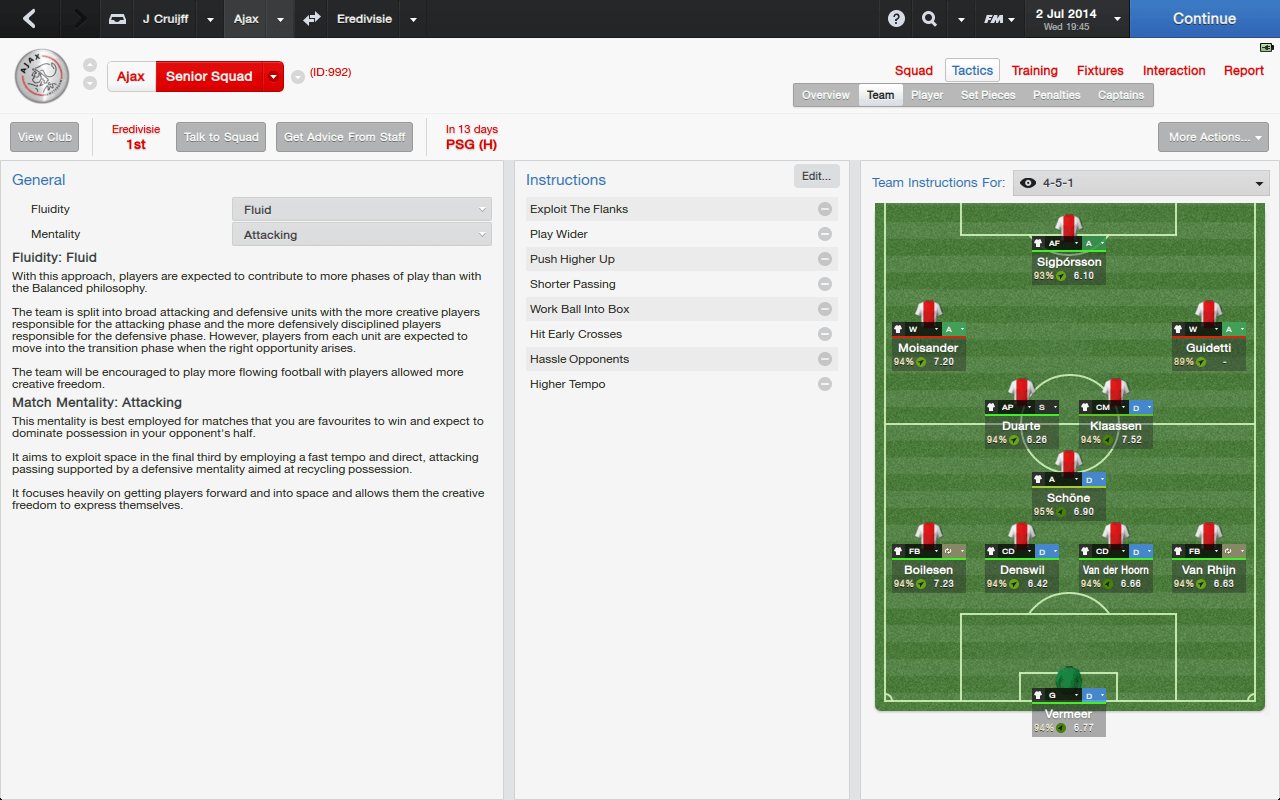 I am lucky to have had time from May to work on these tactics and get the players ready for them. I decided to use a system similar to that in the NBA in America, whereby players are given an iPad and can study up on tactics and opponents beforehand. I sent the squad iPads, each individually named in order for them to learn their own roles in the team but also they can focus on particular players in the opposition line-up when the time comes. The first pre-season friendly is against P$G and it will be interesting to see how we do against one of Europe’s stronger teams. Holland isn’t the most attractive league but I want to change that with the football we play and my first job is to progress in Europe and show we can battle the elite.
Login to Quote

Neal
6 years
Some nice tactics there

Griffo
6 years
Brilliant tactical update, I would love to see your tactics in more depth!
Login to Quote

OMG. Following this for sure!
Login to Quote

Griffo - I shall post more detailed versions later on