As the summer drew on, I decided to take advantage of a quick break to Barcelona with my wife. The players were away from the club on their own holidays and I had been wanting to go back. I knew the city well and it felt nice to go back to just relax and enjoy the beach. I was invited to go back to the Nou Camp and meet the new manager, Luis Enrique. A player who had experienced both sides of El Classico, and someone I had just missed out on managing during my time at Barcelona, I found it fascinating to see just how much our ideals matched on how football should be played. A lovely sentiment I saw just outside the club shop was this glass tribute to myself, along with three other players who had the same. 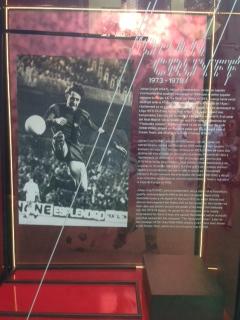 We spent a whole afternoon talking tactics and how to get the best out of different systems and even compared notes on potential players he had available to sign on loan. It was an exhilarating time and brilliant to know my influence rages on in younger coaches as well.

Once we finished our chat, my wife and I headed off for the evening back to our hotel, the swanky W Hotel right on the beach and got ready to head out for dinner. Barcelona is a great city, steeped in culture and tradition. Having played and managed here, the club is very close to my heart and the city as well. Of course it doesn’t compare to the place Ajax has in my heart but it always pleases me to see Barcelona competing and winning trophies, and I have no doubt in my mind that Enrique, with the new signings at the club, will become a force again in Spain after a dismal season last year by their own standards.

I was able to spend time here managing Catalonia, which was an interesting experience but one that allowed me to remain close to players born and bred in Barcelona. It was great to manage a group of great players without the stress of international competitions and I will always remember the bonds created with the players. 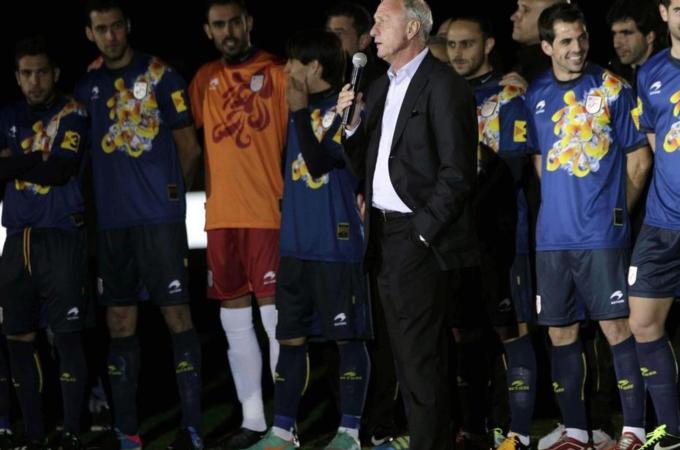 Raheeminho
6 years
I love the depth you write in. I wish I could tell a story like that haha. Good luck man, I love Ajax and everything it stands for. I hope you cna bring back European Glory to Amsterdam.
Login to Quote


Woah, way to neglect your wife!

Ducksworthh
6 years
Bring back the cup to Ajax! Go on lad
Login to Quote


Pre-season is always seen as time for players to get their fitness up to scratch and this year was no different. With the World Cup having come and gone, where surprise finalists Switzerland narrowly beat pre-tournament favourites Germany 1-0, it was now time to get the players in and instruct them on how I want them to play. The great benefit I had coming into the club so early in the summer was being able to get all the transfer business done early, having also added Francis Coquelin into the squad after Christian Poulsen’s departure on a free transfer.

As we know, tactics are only so much of the battle in getting a team to play well. Trying to bring back Total Football is another story completely. Not only do the players have to understand the overall tactic, they must learn their own specific roles in the team and what that translate to on the pitch. This is why the iPads are so important. With only three pre-season friendlies before the JC Schaal match, it was imperative that the players got some good game time under their belt as well as increasing their familiarity with the tactics.

These three games also allowed me to get a clearer idea of who would be in my preferred starting line-up. I decided to hand the captain’s armband to Daley Blind. He was and is by far one of our strongest players, and he has the support of the dressing room. All in all, not the worst set of results. We had some very encouraging build up play against P$G but simply couldn’t finish our chances. But against one of Europe’s top top clubs, a 2-0 loss pre-season isn’t the worst thing in the world. After the Como game, I knew in my mind which 11 players were the first choice for me. Youngsters Fischer and Lucas Andersen have work to do to force their way into this team. 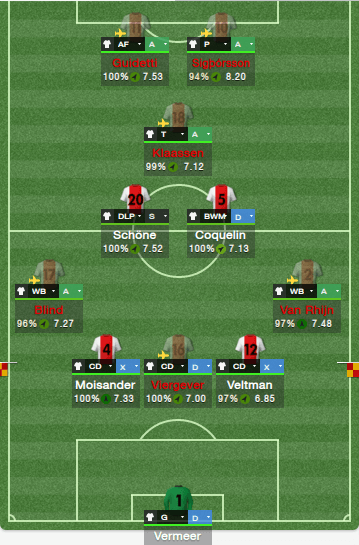 At 28, he stands to be a top keeper for us and in Europe. I hope to see big things from him and hopefully he can get more international caps under his belt!

Another youngster in the Ajax and Netherlands squad, Rhijn has put in excellent performances for club and country. He will be a key member in this 3-5-2 formation with wing backs.

Veltman has been an Ajax boy from the academy and will be given his chance to progress and shine. I see great potential in him and I believe he can go on to be as good as Nemanja Vidic was, if not better.

A new signing, Nick could find himself to be the backbone of this defence, and stop Stefano Denswil from winning his place back once he recovers from injury.

Moisander has a lot to prove, being one of the elder players in the squad at 28. If he doesn’t perform he will quickly find himself being displaced by Denswil or Mohamad.

Blind has a growing reputation in football and may find himself on the hunt for a bigger club if Ajax can’t win titles. I believe we have the potential to do just that however and look forward to watching him play this season.

Lasse was unfortunate not to play all of last season but his ability on the ball is excellent. Even though he doesn’t look the greatest technically, he’s got talent and can pull off assists and goals when we least expect it.

With Poulsen leaving on a free transfer, and being unable to change his mind, I needed reinforcements in the defensive midfield area. Coquelin, though young, has bags of ability and isn’t afraid to put himself about. He could become a pivotal player in this squad.

Though he looks more like a striker, Klaassen could be the perfect Trequartista. Viktor Fischer and Lucas Andersen both are vying for his position.

In my opinion, a very underrated striker and we were lucky to secure him on loan for the whole season. He could be an important player for us and I look forward to seeing him bag some great goals.

A player with excellent movement and finishing ability, I expect him to finish with over 20 goals this year.

And there we have it. What I believe is our strongest starting XI. I know over time this will change but I feel excited heading into the new season. We could have our first piece of silverware by this time next week!

Griffo
6 years
Great update, this is easily my favourite story on the forum right now!
Login to Quote


The JC Schaal, Johan Cruijff Shield, is an important game for me. Winning a trophy named after you is quite a weird but exciting experience and this is no different. Ajax hasn’t had the best record in with this trophy but I wanted to rectify this and ensure we ran out winners against NEC Nijmegen.

Three days before the match, I was sitting in my office at the training ground, looking out of the massive floor to ceiling window at the boys training and just as they finished I saw one of the lads come towards the building. As he walked inside I thought he was going to the toilet or to go shower but there was a knock on the door. A bit surprised, and bemused, I shouted “Come in.” 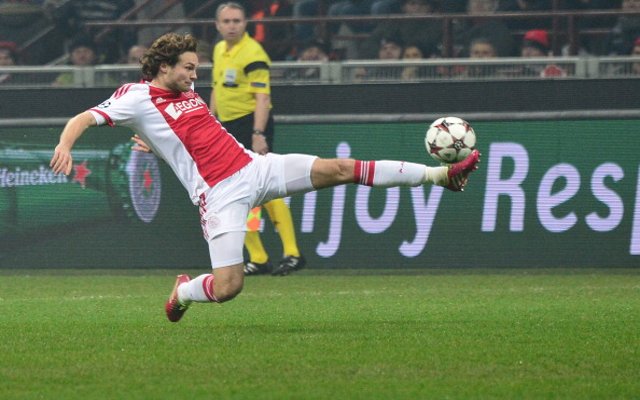 It was Daley Blind. “Have a seat Daley, what can I do for you?”

Daley Blind: “Boss, it’s been great to have you here and so far I’ve enjoyed working with you, but I feel as though my career won’t progress here. I want a move to a bigger club, somewhere that competes with the elite in Europe and I can’t see Ajax doing that.”

This caught me completely off guard. As a new manager as a club that I love, it pained me to see other players were happy to disappear for personal gain.

Johan Cruijff: “Daley I can’t hide my dissatisfaction that you choose to do this now, after I have made you captain of the club and before we even start the season. I know you had a good World Cup but what gives you the right to come in and ask for a transfer??”

Daley Blind: “Mr Cruijff, I apologise for the timing of this but if this is how I feel can I really stay unhappy at the club? Surely it would make more sense to let me go and bring in someone else to replace me?”

Johan Cruijff: “I understand you want to go but I can’t let you go just yet. You’re one of our better players, even at 24 years of age. I have ambitions in my heart and mind and I want you to lead us to them. I am targeting the Europa League trophy by the end of next season. From there, I believe we can kick on and start being a force in the Champions League. If that doesn’t sound exciting as a project to you, I will let you go.”

Daley Blind: “Blimey boss, I know you’re a great manager and it will be a delight playing for you. I want to win trophies in Europe and I hope to see it happen with you. At least for now eh? I’ll leave you to it and see you for training tomorrow.”

Just like that, in the blink of an eye, I had managed to get Blind to change his mind. It wasn’t going to be easy but with the quality in the squad, I have never doubted these boys and I can see us competing with Europe’s elite in the near future. I had to keep my temper in check whilst talking to him but it was enough to get him to stay. I had to refocus on the JC Schaal game against NEC.

I had already decided we would line up 5-3-2 with wingbacks. It was just time to figure out who would be starting. I called in my assistant and we spent the afternoon talking about players’ performances in training and pre-season.
Login to Quote

Neal
6 years
Well, good thing that went well! Blind is a great player, good that you're keeping a hold of him

Griffo
6 years
Daley was blind... now he can see!
1
Login to Quote