I'm at the beginning of my 2nd Season with Borussia Dortmund. [July 2014]
I just received an non-negotiable offer from FC Bayern Munich for Robert Lewandowski.
His current value is €45.5M and he was very successful in the last season.
Scored 29 times in the league, 8 assists, 8 times PoM and 7.54 Average Rating.
His current stats are:
http://s1.directupload.net/images/140811/yzzcsrvr.png

The transfer offer is the following:
http://s14.directupload.net/images/140811/ua2lv3b7.png

So what do you think? Should i sell?
As replacements i currently have Matej Vydra, Timo Werner and Pierre-Emerick Aubameyang on my squad. Should I buy someone else as a better replacement?
I can upload screenshots of Vydra/Werner/Auba Attributes if needed/wanted.

But that is my opinion, so you should get others first!
Login to Quote

JamesWilson
8 years
Sell him and Sign Volland if possible.
Login to Quote


Hoffenheim want around €35-40M for Volland, is that worth?
Login to Quote


Hoffenheim want around €35-40M for Volland, is that worth? 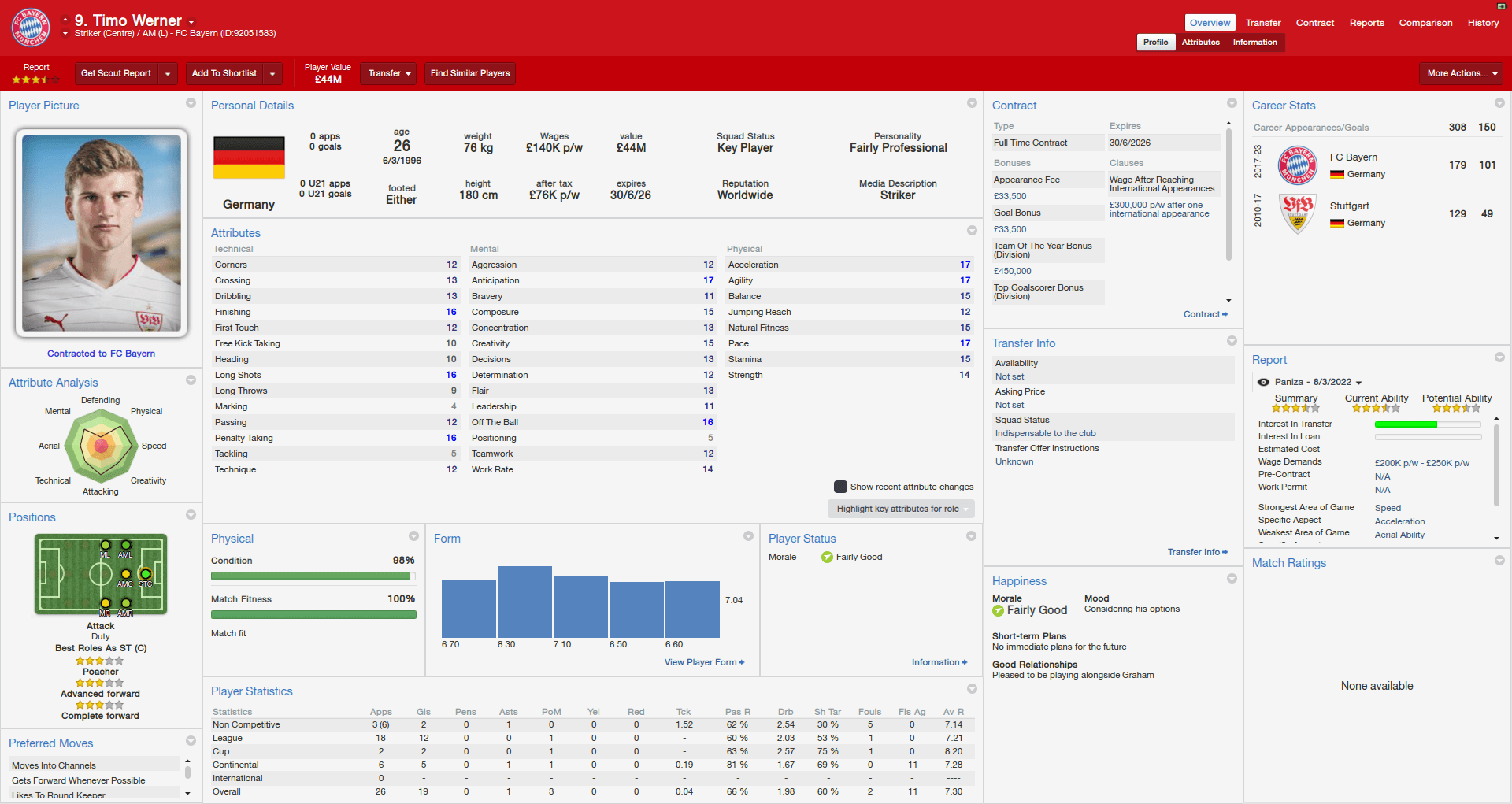 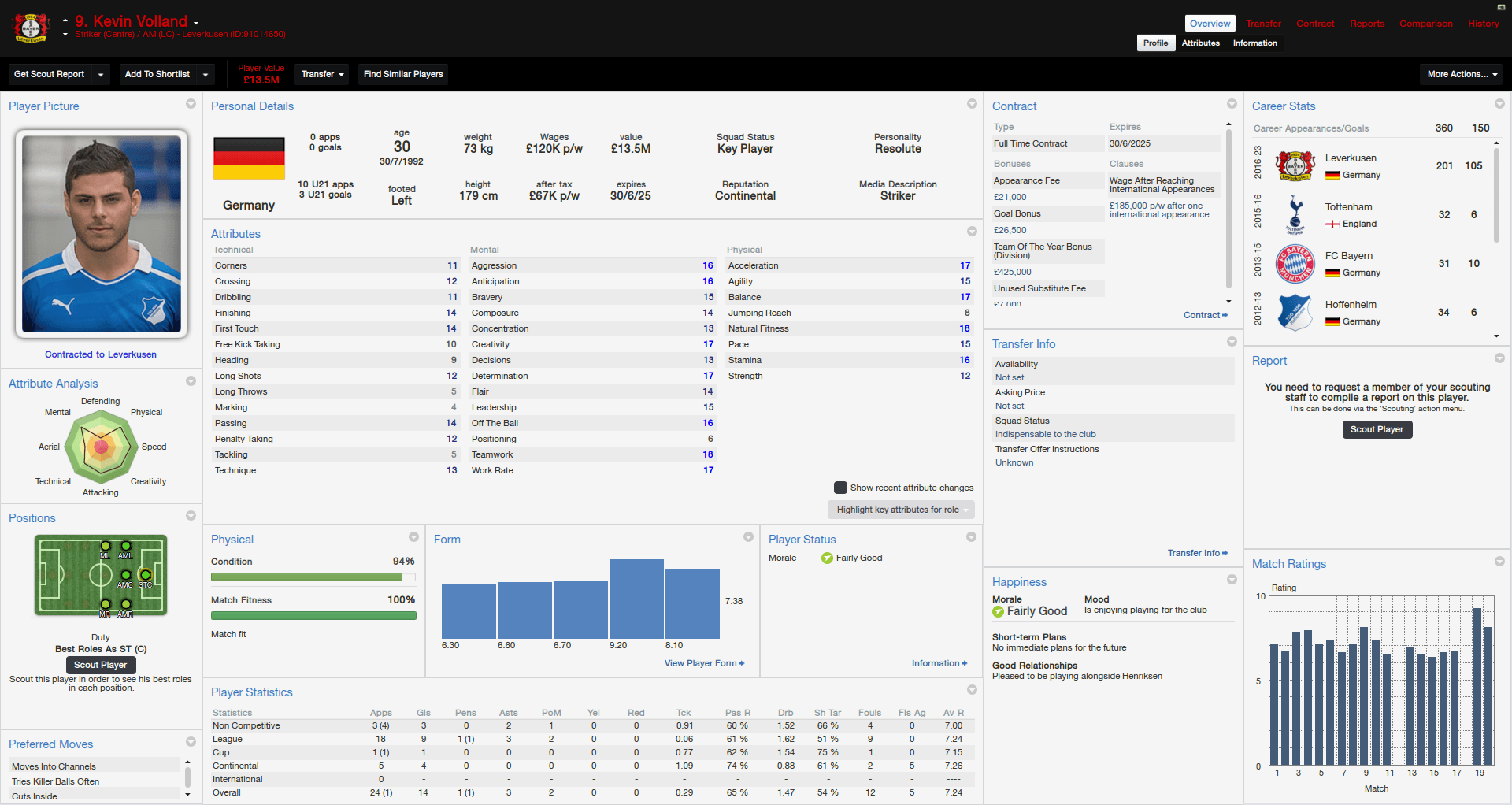 Werner is just hitting the heights of his career aged 26, and has already scored 101, league goals for Bayern. Whereas Volland's scoring record isn't as good.

Hope this helps!
1
Login to Quote

Retrogott
8 years
Thanks for your advice.
Seems like I'll definitly develop Werner.

Someone told me to sign Michy Batshuayi as a replacement. I could get him for around €4-5M.
http://s1.directupload.net/images/140811/nfmfcn7b.png
What do you think of him?
Login to Quote

Justice
8 years
Batshuayi is a goal scoring monster, sign him up for that price! Him and Werner will develop really well
Login to Quote

Tallery
8 years
Batshuayi also turns into a beast. Pick him up, and develop the two. Maybe go 4-4-2 and have Werner a Treq and Batshuayi as a Poacher, and see how it goes
Login to Quote

Retrogott
8 years
Big thanks to both of you!!!!
Bayern Munich now wants a decision and I'm gonna let Lewy go.
Gonna sign Batshuayi and spent some of the money of the Lewy-Deal into a new goalkeeper.
Preferably Courtois, but I think it's gonna be ter Stegen, since Courtois isn't interested at the moment and I don't know any way to change his mid in such a short time.
Login to Quote

Tallery
8 years
No problem mate, I hope I helped, I would love to know how you get on

Yeah you helped me alot!
I'll give you an update how things are going on later.

Retrogott
8 years
I'm halfway through the season.
Playing mainly 4-2-3-1 tactics, because my other tactic with 2 strikers isn't really good yet.
It's some kind of 4-2-2-2 with wingers and 2 strikers. I managed to beat Barcelona in Champions League once with this tactic, but hilariously failed against some smaller clubs using it.

So playing with 1 striker most of the time, I decided to let Timo Werner play much more often than Batshuayi. He is developing really well and scores alot.

However Lewandowski had some trouble at Bayern Munich first, which made a little happy.

But now he is in beast mode again, scored 11 Goals in the last 5 league games for Bayern.
Login to Quote

Tallery
8 years
Good, good, I am glad it paid off! I would love to know what the end of the season is like!
Login to Quote

Retrogott
8 years
So, season is over.
I finished top spot in the Bundesliga.
I lost in DFB-Pokal semi-finale against Bayern Munich 2-3 after extra time.
I won the first leg against Chelsea in Champions League Qtr Finale 3-2 but had a devastating loss in the second leg ... 1-7

Timo Werner played an amazing season and became Bundesliga top scorer, but I decided to play a 4-2-3-1 formation so I loaned out Batshuayi to SC Freiburg, who finished in the 6th spot and Batshuayi played pretty well for them, he also scored against my team.


So again, thanks alot for your adive guys. It all worked out really well!!!
If any other information or screenshots are wanted, I'll sure provide them.
Login to Quote

You are reading "Should I sell Lewandowski? Who is a good replacement?".