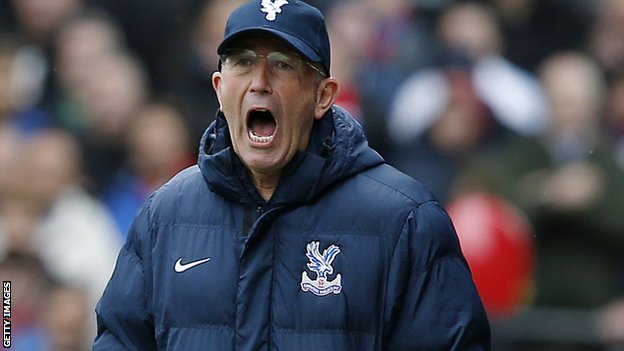 The 56-year-old met chairman Steve Parish as tension between the pair came to a head.
The former Stoke boss, who won the Premier League's manager of the year award last season, had been frustrated by the failure to land a number of summer transfer targets.
Assistant manager Keith Millen will be in temporary charge of the club.
On Friday, Palace issued a statement, saying: "The club would like to thank Tony for his efforts with the club last season and wish him all the best for the future."
Bookmakers' odds had tumbled on as speculation over the Welshman's job intensified.
Malky Mackay and David Moyes were suggested as potential candidates to replace Pulis by former Palace defender Matt Lawrence, speaking on BBC Radio 5 Live.
The remainder of Pulis's coaching staff - including Gerry Francis and Dave Kemp - have left the club.
Pulis wanted to assume greater control of all football matters at Selhurst Park, especially transfers, after missing out on a number of key targets.
He and Parish also disagreed about their vision for the club.
Palace signed Liverpool full-back Martin Kelly on Thursday, while striker Fraizer Campbell arrived from Cardiff for £900,000 and former Fulham centre-back Brede Hangeland have joined on a free.
Just hours before Pulis left, Kelly told the club's official website: "I'm looking forward to playing under Tony and playing regular football again."
Hangeland also picked out Pulis as one of his reasons for moving to Selhurst Park, saying: "All the things I've heard about this club - the manager, players, staff - it's all been good."
Pulis left Stoke last year after seven years at the Britannia Stadium, having guided the Potteries outfit to the Premier League and kept them there, extending his record of never being relegated.
Palace were bottom of the table when he was named as Ian Holloway's replacement
Login to Quote

Lennon was out of work for just three months after leaving Celtic. Lennon won three league titles and two Scottish Cups while at Celtic and notably oversaw Celtic stun Barcelona at Celtic Park.
Lennon was heavily linked with a move to Norwich until the club appointed Neil Adams while also being linked with the West Bromwich Albion job which went to Alan Irvine. Lennon told the press during his unveiling that he had many offers but wanted to wait for the right one.

"I had offers, some from Europe, a few in the UK and one or two in America. But I waited for the perfect opportunity, my name was linked with quite a few teams but the Crystal Palace job was the perfect one for me. A loyal fanbase, a good stadium, a board with big ambitions to take this club forward and I wanted to spearhead that after Tony Pulis left. I've been given assurances over a budget, clearance to choose my own players and I intend to keep Palace in the Premier League and stay out of a relegation dogfight.
Chairman Steve Parish expressed his delight at Lennon's appointment. "He's a top manager, he's won the Scottish League and he's got a good record at Celtic. Obviously the Scottish League is different to England but I'm sure it will take little to no time for Neil to adapt to the English game."
Lennon's arrival comes after Tony Pulis' shock departure over a transfer budget dispute.
Lennon also confirmed that Gerry Francis and David Kemp have left the club, while Keith Millen will remain with the team. "Gerry and David resigned not long after Tony. They came in to work with him and they have left the club. Keith Millen will be staying here as long as he wants to. Maybe not as my assistant but definitley amongst the coaching staff."

Lennon's Palace side kick off their pre season with a home friendly against Schalke 04.
Login to Quote

Neil Lennon negotiated a five million pound double deal for the Celtic duo with Commons costing 3.2 million and Mulgrew costing 1.8 million. Palace were notably lacking in the attacking midfielder department after the departures of Yannick Bolasie to Stade Rennais and Jon Williams to Sunderland on season long loan deals.
"The two are fantastic players who I've worked with Celtic who are both good enough for the Premier League and have fantastic work ethics." Lennon said.
Charlie Mulgrew told press he was very happy to be playing in the Premier League.
"I'm delighted to sign for Crystal Palace as it's a chance for me to play in the Premier League. It's the best league in the world, the most intense and it's the elite competition. Spain are regarded to be the best but for the best part of two decades it's been Real Madrid and Barcelona fighting out, now it's a three horse race in Spain but in England there are six teams who could win the league. I can't wait to put the Palace shirt on and play in the Premier League."

Kris Commons told of his delight to return to England.
"I'm delighted to be back in England, I had four fantastic seasons with Celtic, I played in the Champions League and I won the SPL. It's my first crack at the Premier League, I've played in the Championship which is a tough league but no league is tougher than this. I'm looking forward to playing in the Premier League for Crystal Palace!"
Login to Quote

Zaha returns to Palace on a season long loan

Manchester United and Crystal Palace have confirmed the deal on their websites. Despite reports, there is no permanent fee agreed in the loan deal. Zaha rejected offers from a host of Premier League clubs, most notably Tottenham Hotspur to rejoin Palace.
"I could never say no to Palace. They are the team I was with for eleven years and I'm delighted to be back here, even if it is a loan deal. I am buzzing for the start of the season and I can't wait to play at Selhurst Park again!"
Neil Lennon engineered the deal to bring the once capped England international to Selhurst Park after a dismal season where he was overlooked at Manchester United by David Moyes. Zaha was loaned to Cardiff before the loan with Palace was agreed. Zaha stopped short of handing in a transfer request while David Moyes was in charge but decided to remain with United after the Scot was sacked.
Zaha is set to make his return for Palace in their pre season friendly at home to Schalke.
Login to Quote

Oz96
7 years
Good luck with taking over Crystal Palace, a lot of drama about them at the moment which makes it interesting even more. Good job on the updates!
1
Login to Quote

InvertedWingbacks
7 years
some good signings mate, and a nice start: good luck with this
1
Login to Quote

Raheeminho
7 years
Good signings mate, I think Palace will struggle without Pulis in real life but hopefully you'll better him.
1
Login to Quote

k1rups
7 years
Good start and good signings. Just a bit of advice mate, break up the text a bit more by using proper paragraphs as it will make it easier to read
Login to Quote

Stephen_G
7 years
Oz96 TodayatTomorrow welch97cf Raheeminho - Thanks all for the kind words!
k1rups - I will restructure it to make it easier to read, thanks for pointing that out!


Dwight Gayle scored eight goals in 25 games at Palace, most notably a double in the club's remarkable 3-3 comeback against Liverpool. Dwight will spend the season at Burnley where he will gain vital first team experience.

Barry Bannan made 15 appearances for Palace last season and will spend the season on loan at Rotherham.

Sadly, Glenn Murray will be leaving us permanently as he has signed for Wolves. Murray scored 39 goals in 102 games for Crystal Palace and was the Championships top scorer as Palace were promoted to the Premier League. We wish him the very best in his future endeavours.
Login to Quote

Ducksworthh
7 years
Trust your decision making to let them go. Hopefully you can bring some real quality in. Your transfers so far have been great - especially Zaha.
1
Login to Quote

Stephen_G
7 years
Lads, it is with regret I announce...
http://i48.tinypic.com/fmjfxe.jpg
Login to Quote

Deleted
7 years
Oh dear! You restarting it?
Login to Quote

You are reading "Palace without Pulis".