In a shock turn of events, Gordon Strachan has left his post as Scotland manager; leaving the SFA scrambling to announce his successor, ahead of the continuation of the nation’s World Cup qualifying campaign. Strachan announced his departure in a press conference, stating that: ”International management isn’t where I truly want to be; being at the mercy of clubs who seek to protect their investments, and players who throw a strop if they’re not picked...that’s not what i’m about. I’ll be taking a short break from football, before seeking to get back into club management. I’d like to thank the fans, players and SFA for their support so far this campaign, and wish the new manager all the best for the future. Thank You.”

But just who is that new man?

In a career spanning 22 years, with 102 caps and 30 goals to his name, and named as the best British Striker of all time by FourFourTwo magazine in 2009, Scotland’s new manager goes far beyond being a household name, on both sides of the border. Playing for both Celtic and Liverpool, and named as one of the “100 Players Who Shook The Kop”, the 5ft 8 striker holds the hearts of many a football fan; particularly those who sing “You’ll Never Walk Alone”. 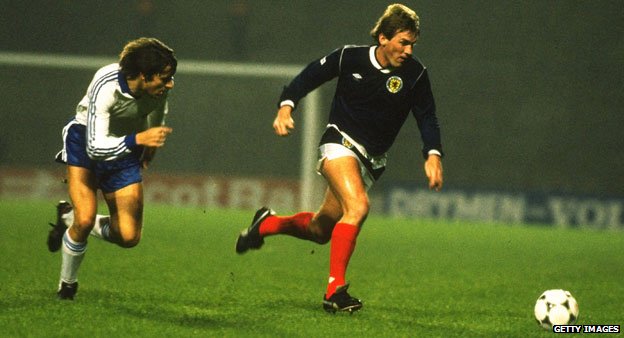 That Man: Kenny Dalglish Outpaces a Defender in his heyday

Kenny Dalglish, formerly manager of Liverpool (twice), Blackburn Rovers, Newcastle United and Celtic, has left his post as a Director of Liverpool FC in order to take charge of the national side. With a managerial career which saw him lift 14 trophies so far, including the First Division (now premiership), the League and FA cups, the Premier League and the Scottish League Cup, “King Kenny” will be looking to take his proud nation back to a major international tournament for the first time since 1998.
Login to Quote

You are reading "Scotland: A New Era".