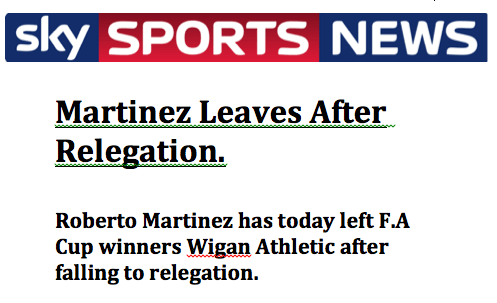 No, No, No, No! Roberto is leaving? Wait no he HAS left. It can’t be. He won us the F.A Cup!!! Ok, we got relegated but he is most probably the best manager we have ever had, well in my life time and I’m 43 years of age.

Born January 25th 1970, I was born to parents Jackie and John Davids. My mum Jackie is a retired sports physio and became the first ever woman to work in football. This is where she met my Dad. My Dad was a football manager at Wigan Athletic when mum was appointed as under 21s head physio.

I was an only child and grew up to support my local side, the club in which mum and dad met. I hold a season ticket and have done since 1982. Witnessing triumphs like our first silverware (the Freight Rover Trophy). We came so close to promotion in 1986-87 season. Before being relegated back to Division 4 just 6 years later. In 1995 the best thing to happen to the club happened, Dave Whelan became the owner.

10 years later and we had one game to win to get into the Premier league. A game in which I had the perfect seats to witness a 3-1 victory over Ipswich Town. The perfect day! More amazing times where to follow the Carling Cup run before losing 4-0 to Manchester United in the final. Of course we had our bad times, mainly Titus Bramble! Last season was the bitter sweet every fan hates. A mix of F.A Cup and relegation. And I’ve witnessed it all!

Now Roberto has left! What will we do! Who will be bought in? In Dave I trust!

Maybe I should just hand in my CV. I mean I’m sure Dave will support my background, a semi-pro and of course my Dad was the manager there at one time.

All our success has come from men who love the club and I don’t think any body loves the club more than me!
Login to Quote

TheLFCFan
7 years
Hello and welcome to my first ever story. My graphics are going to be poor compared to most writers on here and my writing may not be as good either. I am just writing this for the fun and will be keen for any who reads this to help me improve! Thanks and wish me luck


better than mine imo
Login to Quote

Other Information: Both Parents have worked at Wigan before…..John Davids-former manager and Jodie Davids- former physio.

We would like to inform you that we have received your CV and application to become the new Wigan Athletic manager.

We invite you to come to the club at 10:00am on 27th June 2013. In this meeting Dave Whelan will discuss the possibility of having a job here. A video will also be taken to show to the rest of the board.

They will discus together before potentially offering you the job.

Good Luck and see you soon,

Micael Davids a man who has no managerial expirenced apart from coaching Darlington under 21s has been named Wigan manager.

After Roberto Martinez leaving a club who he won the F.A Cup with his replacement has been named. Micael Davids, 43, has been named as Wigan Athletic manager. 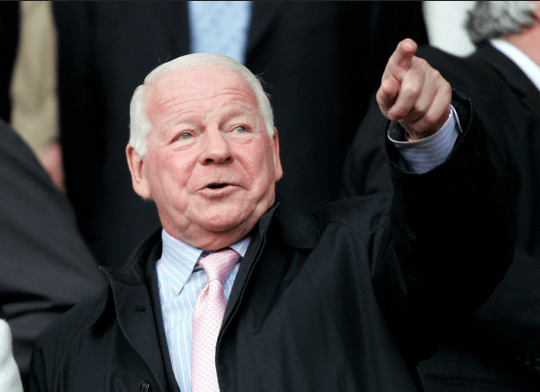 Even though Wigan where linked with and interviewed many top and experienced managers they weren’t even approached and Davids was the clubs first choice.

Dave Whelan had this to say “Yes its unexpected, yes he has only played semi-professional football and yes his last job was managing an under 21s semi pro side but he is a true fan, a man who loves the club. When we interviewed the man he told me that the most success this club had was when someone who came in and loved the club. I agree with him and he proved his love for the club by producing any answer to any question I asked about the club. We wish him well here.”

Micael hasn’t spoken yet but will do soon when as an interview has been scheduled for tomorrow. 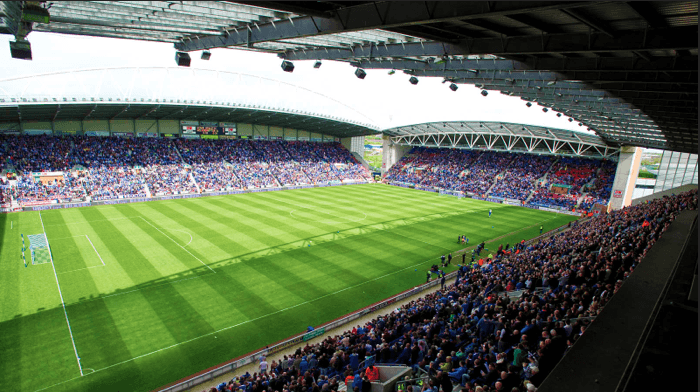 Our reporter Jim White spoke to some fans in and around the DW stadium who gave their opinion on the appointment.

“It’s a disgrace, we should of got Roberto Di Matteo, he won the champions league!! Whats Davids done managed a McDonalds. Ha what a joke!”

“In Dave I trust he’s come up good for us in the past and I believe it will happen again. Good Luck to Micael and I hope he brings us success.”

Finally a 10 year old had his say “Whoever he is just get us back in the prem please!!!!”

We wish the manager well and will bring the interview to you live tomorrow from 15:00pm.
Login to Quote

DW- Hello Everyone and welcome to the new manager Micael Davids first interview at the club.

MD- Thanks Mr Whelan and Hello everyone.

JW- Welcome Micael to Wigan, we are told you are a massive fan of the club how happy are you with being appointed here?

MD- Thanks Jim. Its massive for me, I have held a season ticket here for over 30 years, my mum and dad have both worked at the club and I feel I’m keeping up a tradition.

AL- Dave why was Micael appointed, no offence to Micael but much more expirenced managers?

DW- He was appointed due to his pure love of the club. I haven’t met a manager more passionate about the club before and he has such great ideas for the club.

GL- What are your hopes for the next 5 years as boss here Micael?

MD- Well this year is all about getting back in to the premier league. If we can follow that with a good run in the Europa league I’ll be very happy. But priory 1 is promotion. Next couple of years will be aiming for mid-table before launching an attack on the European places.

GL- that’s a very ambitious plan to be going into the European places after being relegated 4 years earlier?

MD- It might seem that way but I believe it is possible. Our current crop of players are top quality and will be able to achive the first 3 years for sure. We will aim to bring in younger players to devlop to replace the older guys for the last 2 years of the plan.

JW- What are your thoughts on this plan Dave?

DW- This is what Micael told me when I asked him what his plan was, his level of ambition is perfect and I personally think his knowledge of the team will increase any chance we have of getting the promotion.

AL- What are your transfer targets Micael?

MD- Every time! One reporter asks the manager whats you targets every time we reply with not telling! So why bother! I can tell you my policy though. Buy the right players for the right money.

DW- That’s all we have time for now guys thank you.
Login to Quote

You are reading "Wigan- We Will Rise Again.".