pompeyblue
7 years
Woah, what a fantastic month and an unbelievable result against City! This is the stuff of dreams for Oldham Athletic..

Walter
7 years
Not only a fantastic result against an extremely strong Manchester City side but a brilliant month in the Championship, too - you're absolutely flying. Great month and update to go alongside it!
Login to Quote

MisterLister
7 years
WOW! What a month crowned with win over Man City. Congrats mate and I believe that this season is the season where you are going to finish in promotion spot and next season we are going to follow premiere division updates. Cheers
Login to Quote

Aaron
7 years
What are you feeding your players mate? Roid-rage this month, haha! Well in bud!
Login to Quote

samclaret
7 years
Made an account just to say how good this story is James, keep it up!
Login to Quote

Neal
7 years
Amazing victory over City, really shows the progress you're making! Equally impressive that you're doing so well in the Championship; keep this form up and you'll be in the Prem next thing you know! Also, great to see Rolando Aarons keep developing nicely

TaroMisaki
7 years
What a win against City, even though it was only one goal difference, but at least you won against Cardiff!
And then the win against such a no-name team like Manchester City, I mean who are they?

Jamesg237
7 years
Feliks:They certainly do not! I would fancy our chances of beating them again in the future.

pompeyblue:I can't quite believe it. Cup final here we come...maybe.

Walter:The results this months were pleasing but the focus has to be on the City result. Aguero who?

MisterLister:Promotion might be a step to far this season but it is a possibility for the future if we carry on like this.

AaronHJFT96:They are training hard and being given confidence which is shown in the results!

samclaret:Thank you and welcome to the site.

Neal:Aarons is one to keep an eye on! Great future ahead of him! Thanks as always Neal.

TaroMisaki:Who are they? That is the question. Nobody compared to us right now. 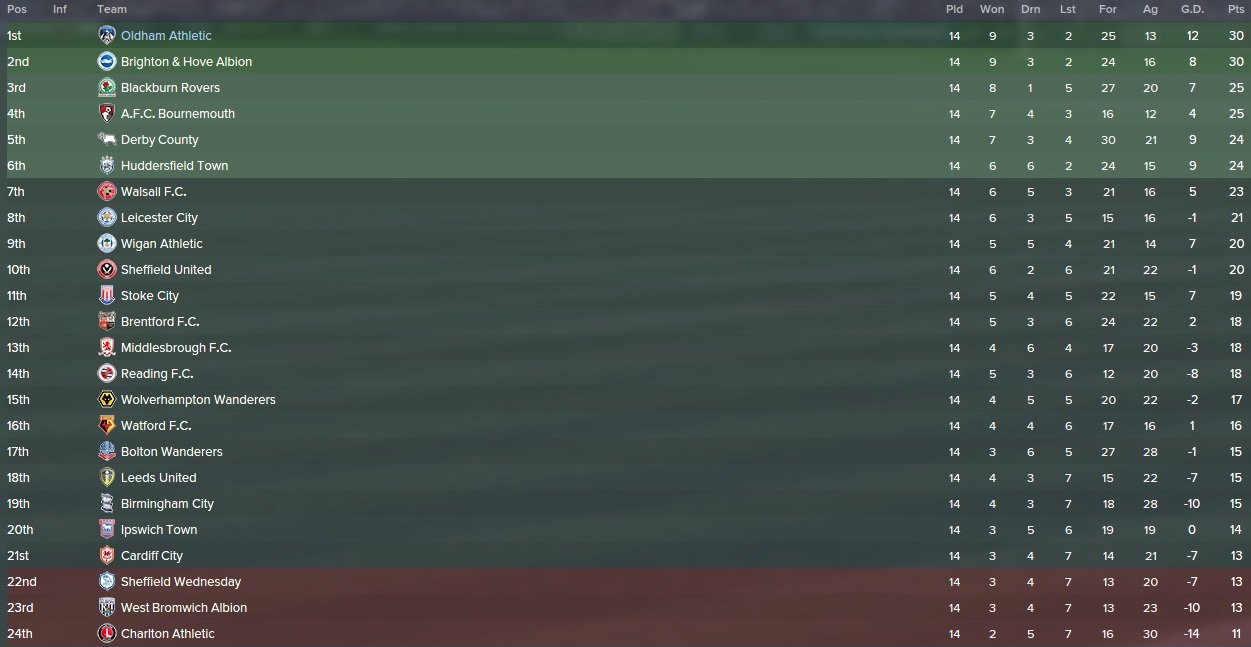 Obviously with the rise in my reputation and the rise of the club I am currently managing, other clubs are going to come sniffing around and ultimately test my loyalty to Oldham Athletic. Fortunately for Oldham, my allegiances weren’t really tested with the job offers which came my way this month. First Leyton Orient who preside in Sky Bet League One and are sat mid table. You have got to appreciate their ambition to try and get me to leave my high flying Championship club for a mid table club who are very unlikely, even under my stewardship, to climb up the rankings any season soon.

Three more job offers came my way this month with the offers coming from three former Premier League clubs. Unfortunately for the clubs they have suffered a dramatic decline in stature and are all found at the bottom half of the league that I and Oldham currently lead. First West Bromwich came knocking shortly after they held us to a 0-0 draw at our home ground. Again there was nothing that attracted me to the club so the offer of an interview was declined very swiftly. Up next was the well known chairman, Vincent Tan who still owns Cardiff City. Since there only season in the Premier league they have had to suffer many a disappointment and are languishing just above the drop zone. Again, why would I leave a team that are comfortably in the top half of the league for a club that look like they will be involved in a relegation zone for the remainder of the season, money? Not a chance of it. I always put my contract to the lowest amount so it doesn’t have a detrimental effect on the club’s finances so again they couldn’t offer me anything to make me ditch Oldham. The final team that offered me a job interview was Birmingham City and the offer was swiftly declined for the same reasons as above.

My swift declines of job offers have done no harm to my reputation at Oldham which currently stands at untouchable and I am confident it will stay at that level if we continue to have unbeaten months like this one. Great league performances along with continued cup progression will only make my position stronger at the club that I can only see us going in one directon...up!


Player of the Month – Jack Stephens

Thanks.
Login to Quote 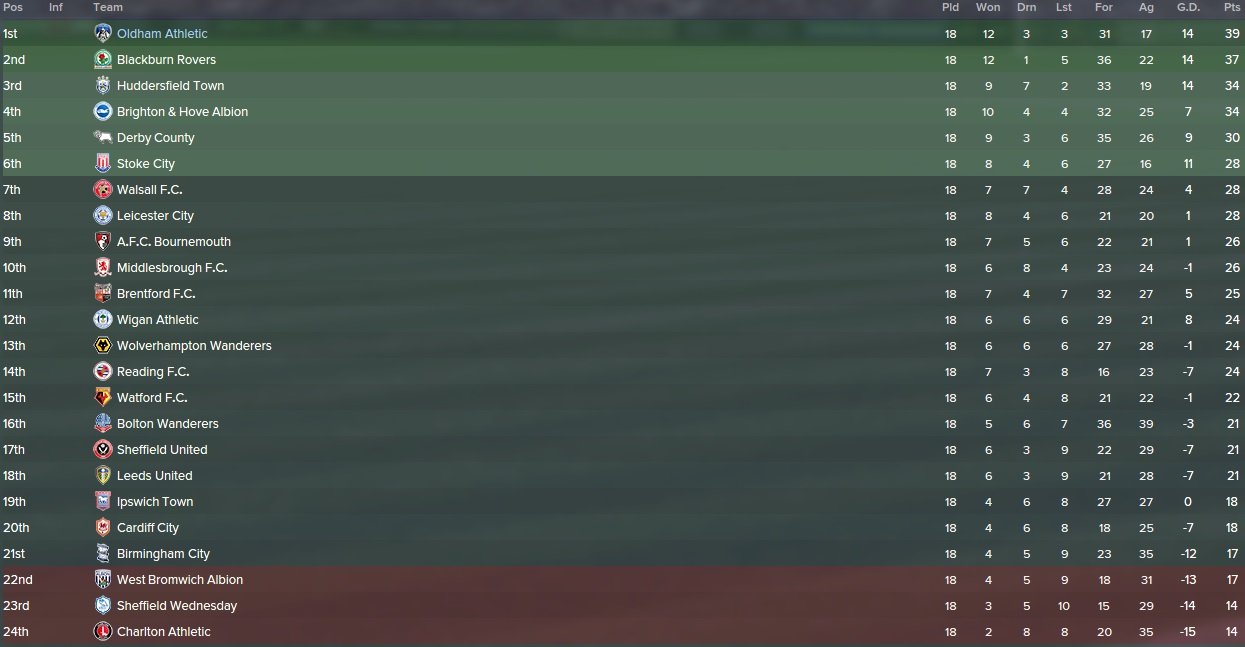 I was brutally honest in my last update and made it quite clear that the job interviews I was offered were declined swiftly and the Leyton Orient one in particular was quite insulting; you could see it as ambitious on their part I guess. However, I will always look at the job security of manager’s at clubs who are above us, which at the minute means solely Premier League clubs. There was one job that tested my loyalty and in fact, it was tested to its limits! The job was at Hull City who had managed to retain a Premier League spot since this save had started. However, the board and fans appeared to be losing faith in Steve Bruce to guide them from being a club that simply retains its position to one that could be challenging at a higher level. This information left me with a decision, which I could potentially regret. Do I declare my interest in the job despite Steve still being at the club or do I remain focused on Oldham?

I have to admit that I did in fact declare an interest in the possibility of taking over as Hull City manager. It wasn’t done necessarily with the thought I would actually be offered the job as the club still had a manager in place but instead it was done to determine whether I would have a chance at getting a job at a Premier League club. To my surprise, Hull said that they would consider my application if the job became available. I do think that a club like Hull would be a great next step for me to take as a manager. A club that is consistently playing in the Premier League, expectations are not too high, decent playing personnel and good financial backing; this kind of club would be ideal! It will be interesting to see how much longer Steve Bruce stays as their manager. I doubt Hull will come seeking my signature on a contract but it was still interesting to gauge whether a Premier League club of Hull City’s stature would consider my application. Promising news!


Player of the Month –Duane Holmes