TVDLC123
5 years
@Tallery - Thanks, and yeah, I am very happy with the price I got Tariq for, considering his potential

@Pompey - Yea, Tariq will be getting lots of game time at Pescara, so he should progress well!

@Justice - Thanks, I hope they will!
Login to Quote

‘I will make use of the Pozzo link’ says Di Natale 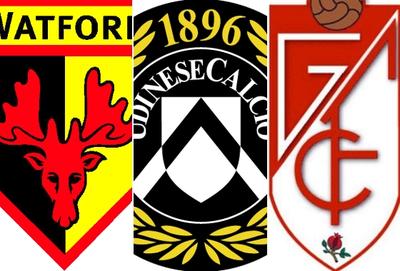 Antonio Di Natale has publicly announced he will be taking full advantage of Udinese’s link with English side Watford and Spanish side Granada, both in loaning out players to receive full match experience, but also bringing in some of the stars from these clubs. Many suggest this could have a negative impact on the two feeder clubs, whose best players could be poached away, but Di Natale insists that his aim will be to let those clubs grow as well.

The Pozzo family first bought Udinese in July 1986, and helped them recover from betting scandals and low finishes to their current position, fighting for European places. With the success in their home nation of Italy achieved, the next target was Spanish side Granada. Lurking in the Spanish lower leagues, with the help of the newly established link, they were soon promoted in La Liga, where they have remained since. Most recently, they chose to buy English Championship side Watford in 2012, and have so far invested heavily into their stadium, as well as bringing lots of players from their other projects over to England.

Under the rules of the agreement, Udinese, as the parent club can buy any of their feeder club’s players for free, while those clubs can loan Udinese players without a cost. Examples of this included Allan Nyom and Abdou Sissoko, both loaned to Granada, while players such as Matej Vydra, on a temporary basis, and Fernando Forestieri permanently making the switch to Watford.

Giampolo, and his son Gino Pozzo have come under some criticism for their business-like approach to the sport, shifting players as just mere utensils of the biggest picture. Despite this, no-one can argue with the results it has produced with the clubs involved. Udinese are now one of the largest clubs in Italy, are all able to secure young talent, develop them through feeder clubs, before selling them on for a huge fee. A prime illustration of this model is Alexis Sanchez, with the Chilean winger coming through the Udinese ranks before being sold for £25 million to Barcelona. Now at Arsenal, Sanchez’ career was built by Udinese and the Pozzo family, and the basis for many others to follow suit is in place. However, whether Udinese will always be a selling club, just another cog in the Pozzo machine, or whether under the guidance of Di Natale, they can elevate themselves to the top level, it is still to be seen.

Tallery
5 years
Nice idea, forgot about that, should make it interesting

Mohamed
5 years
Love the suspense put in there man, typical Italy there, I will be following

TVDLC123
5 years
@Tallery - Thanks, hopefully it will give us the edge we need!
@Mo - Cheers mate, its great to have you on board

Aaron
5 years
It's funny because each team is forever a loan but they are all owned by the same family so in actual fact they are probably the most not alone clubs in the World.

Feliks
5 years
Good luck Tanay, Udinese are a great club and Di Natale is a legend!
Login to Quote

@Feliks - Thanks mate, they are a match made in heaven! 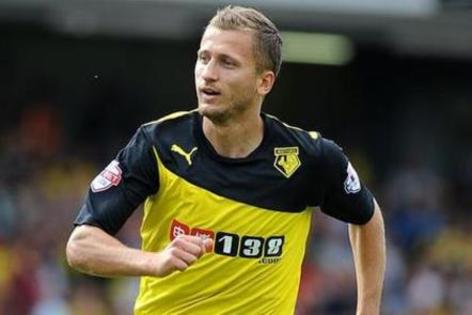 Udinese have captured former Watford central midfielder Almen Abdi on a free transfer, due to the agreement between the clubs owned by the Pozzo family. The Swiss signs a 4 year deal, which will see him earn around £21,000 per week. A fan favourite at his old club, the 27 year old re-joins Udinese after 2 years and joins a squad already full of central midfielders, with the likes of Allan, Guilherme, Bruno Fernandes and Emmamuel Badu all capable of playing in that role.

Beginning his career in his home nation, he played for FC Zurich throughout his younger years. He managed to break into the first team in the 06/07 campaign, and after making his Champions League debut, settled as one of their top players. The 08/09 season was his personal best, after he scored 19 times in his 32 appearances, attracting the attention of bigger clubs around Europe. After a short loan spell at French side Lens was unfruitful, Abdi joined Udinese on a free transfer the following season. After a few unsuccessful years, he agreed a loan deal to Watford and made the switch permanent for the following campaign. However, after being the Hornets Player of the Season, manager Di Natale has chosen to bring his back to the Stadio Friuli.

In the press conference following the confirmation, Di Natale had this to say about Abdi.

‘Almen is an extremely talented player, and will be vital for us over the coming season. He is versatile and skilled on the ball, and gives us yet another strong option in the centre of the park, with our midfield shaping up now as one of the best in the league. I am personally very good friends with Almen, and I feel he has returned to us a rejuvenated player; on a totally different level than when he left.’ 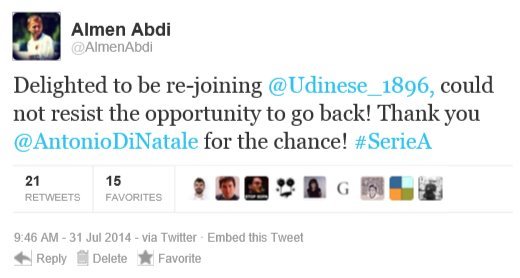 Icarus
5 years
Nice use of the tri-link, Granada have some really good youths you might want to look at

It's funny alot of people don't know that Udinese and Watford are linked, let alone Granada

pompeyblue
5 years
Those link's are really going to come in handy, so hopefully you can make good use of them!
Nice updates

TVDLC123
5 years
@Icarus - Thanks, I am very interested in some of Granada's players, and tbh I actually forgot about the link until I opened the save and saw like 20 of my players at loan at Watford

@Pompey - Cheers mate, I will taking advantage of it for sure.

No1VillaFan
5 years
He is a good signing! and really think you will do well now
Login to Quote

TVDLC123
5 years
@Jason - Thanks, he is going to be vital for me this season!
Login to Quote

Murillo joins Udinese on a free

http://estaticos02.marca.com/imagenes/2014/04/14/futbol/equipos/granada/1397496739_extras_noticia_foton_7_1.jpg
Murillo rubbed shoulders with some of the worlds best during his time in Spain

Centre back Jeison Murillo is the 4th player to sign for Udinese this season, as manager Antonio Di Natale continues to make good on his promise to utilise the Pozzo link. The 22 year old began his career with the Italian club, and after a successful year at Spanish side Granada, they have chosen to bring his back to the club on a free. While Granada will receive no monetary sum for the deal, full back Allan Nyom has extended his loan spell at the club for yet another year. Murillo will earn £32,000 per week at Udinese, after he put pen to paper on a 4 year deal.

Murillo was bought by Udinese at the age of 18, and was immediately loaned to Granada as part of their agreement. Whilst he did not get any first team action, the BBVA side saw enough promise in the defender to make the move permanent. After a few loan spells to lower league Spanish sides such as Las Palmas and Cadiz, Murillo managed to break into the Granada starting line-up in 2013, and went on to make 32 appearances in that campaign. His high performance level during this time coupled with his strength in the air attracted interest from the likes of Atletico, but Udinese moved in first, using their strong connections with Murillo’s former side to push through a deal quickly.

Murillo joins the side in Bulgaria for their training camp, where he had this to say regarding the deal.

‘I would like to thank the coaching staff, players and everyone who supported me through my time at Granada. I have grown, both as a player and as a person during my time in Spain, and I now feel that for the next part of my career it was ideal to have a new challenge. Udinese offers me that, as a strong club in one of the top leagues in the world. I also know the new manager Antonio very well from my short time here, and I am looking forward to be playing under him.’

You are reading "Antonio Di Natale - The Slave of Football".