Toon
6 years
This is the story of two young footballers who perhaps have the potential to become the best in the world, the next Ronaldo and Messi. How will their differing personalities and different skillsets affect the path they take? Who knows. But what is for sure is that these two young players are the future of football.

Say hello to the Next Generation.

((More graphics and info coming soon, this is just a teaser!))
Login to Quote

No1VillaFan
6 years
I will be following for sure!
Login to Quote 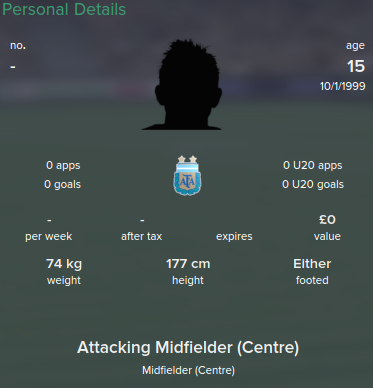 Hello. My names in Andrés. I am from Buenos Aires, the capital of Argentina. From since I was a young boy I have always loved football. It is the thing I wake up for, the thing I think about when I go to bed. I have always dreamed of being a footballer - specifically a midfielder, my creativity being my strongest feat - or at least that's what my old coach said.

He also spoke of my versatility. Although he saw me as a Centre Midfielder, he also said I could play anywhere in midfield - even up front. Personally, I see myself as an Attacking Midfielder, though. I like being up there attacking and creating goals. Scoring them too, sometimes.

When I was younger, I was the best at football in my area. That's what people said. I wasn't too sure at first, but people began to speak with me - football scouts. They said I had what it took. One day I went to try out for the world renowned team, Boca Juniors. I impressed the coach there - but I apparently also impressed a scout from Europe, from Spain. I was given two offers after that day, one to join Boca Juniors and one to join the Spanish team Real Sociedad. I eventually decided on joining the team in Spain, as everyone agreed that it would be a huge step for me and maybe a root to my dream of one day playing for Argentina. My family are not particularly poor, but they could not all go. My older brother, who also wanted to leave Argentina, went with me and became my legal guardian. I had to give up time with my family to do the thing I loved.

I spent three years in Sociedad training and improving. I matured a great deal in my time there. I not only played, but I watched the Senior team whenever I could and grew to love them. To this day they are my favourite football team. Unfortunately, I had to leave them.

Around two months ago I learned that my mother was extremely ill, and that she could even die within a few months. Of course, I would want to be with my mother through this time. Sociedad offered me a chance to leave for a while and then return later but I simply could not, I wanted to stay with my mother for as long as I could, so I returned to Argentina.

I am by no means giving up though. I realise that there are many clubs in Argentina and in my time in Sociedad I have gained somewhat of a reputation - people recognise me as somewhat of a prodigy. I have been called a wonderkid before. I heard in the news that Sociedad were extremely disappointed to lose me, and I feel bad, but I know that my mother is more important. Anyway, I do not mean to seem arrogant, but I am sure any team in the country would be interested in signing me.

I have been completely out of football since I returned, though. My mother is okay at the moment, but they still say she has limited time to live, so I've been reluctant to return to football. I think my time is now, though, I am starting to slow down in my improvement and I am not very fit.

For now, all I can do is wait. My agent, who I met in Sociedad, is still working with me. He says he will do whatever it takes to find the right club for me. I am thankful for that, so all I can do is wait and try to ignore rumours in the papers.
Login to Quote 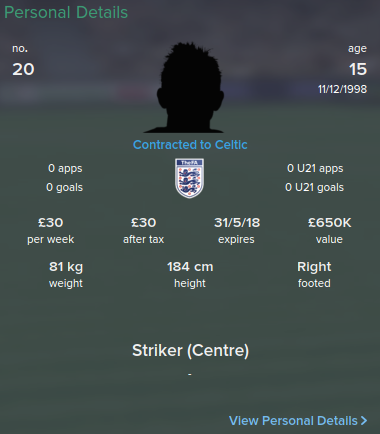 My name is Franklin Akenzua, and I am going to be the next Lionel Messi. I was born in a poor household in Benin and moved to England when I was just a child. Ever since I could walk I had a ball at my feet, and over the years I have honed my skills. I am now one of the highest rated young players in this part of the world, and for good reason.

I am a striker. My coaches have tried to play me in a range of positions, but they have all come to the same conclusion; that I am destined to be a number 9, to lead the team at the front. I know I will be a goalscorer, I already destroy the net on a regular basis at a youth level. 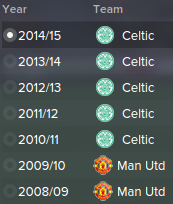 When I was young I was noticed by the best team in the country, Manchester United, and I was recruited by them. I played for a while and outshined most of the competition - unfortunately they were not ready for me at this time and agreed a deal with Celtic in Scotland. At first I was very disappointed to leave, but I know now that it was a beneficial move.

As a young football fan, I always dreamed of playing for Manchester United, and one day Barcelona, and when I left Manchester United, it seemed like, at first, a step back. It was more of a side step in truth, another route to my future - a fruitful one, though, I am sure. I know I will still become the player I would have through the Manchester setup. Anyway, I am glad I came to Celtic as I have learned to really appreciate it as a club and it's now a team I genuinely care about and will continue to follow in my future when I am at a bigger club - which is going to happen, I'm sure.

Because I was born in Benin, raised in England and have spent the last few years in Scotland, I have many options for my future International career. I feel at the moment, England are the best option as they have the best team. I have no intention of playing for Benin - even though it holds sentimental value, I do not even remember what it was like there, and it is a small team.

I suppose it is wrong to think about national games at my age. Now I should just be thinking about my future in club football. I have a lot of decisions ahead of me.

Although I am very happy where I am at, I have heard a lot of rumours online about clubs having interest in me. In the end, I will need a long conversation with my agent about where is best for me. I cannot wait to see what the future brings, especially with all these options.
Login to Quote

Tallery
6 years
Want him to go to either Bournemouth or Chelsea!
Login to Quote

Icarus
6 years
Sweet idea Toon, how about adding in there an Italian Wonderkid in the midst?

Maybe the next Maldini, or Baggio haha.
Login to Quote

You are reading "Next Generation".