sadak
8 years • Edited
Silvio Berlusconi decided to give former AC Milan legend Clarence Seedorf the sack after the Dutch manager lost the dressing room. As a replacement, the media touted Inzaghi to be the favourite, but Milan surprisingly hired another former legendary AC Milan player, the Romanian Christian Andrei, who has no prior experience as a manager. 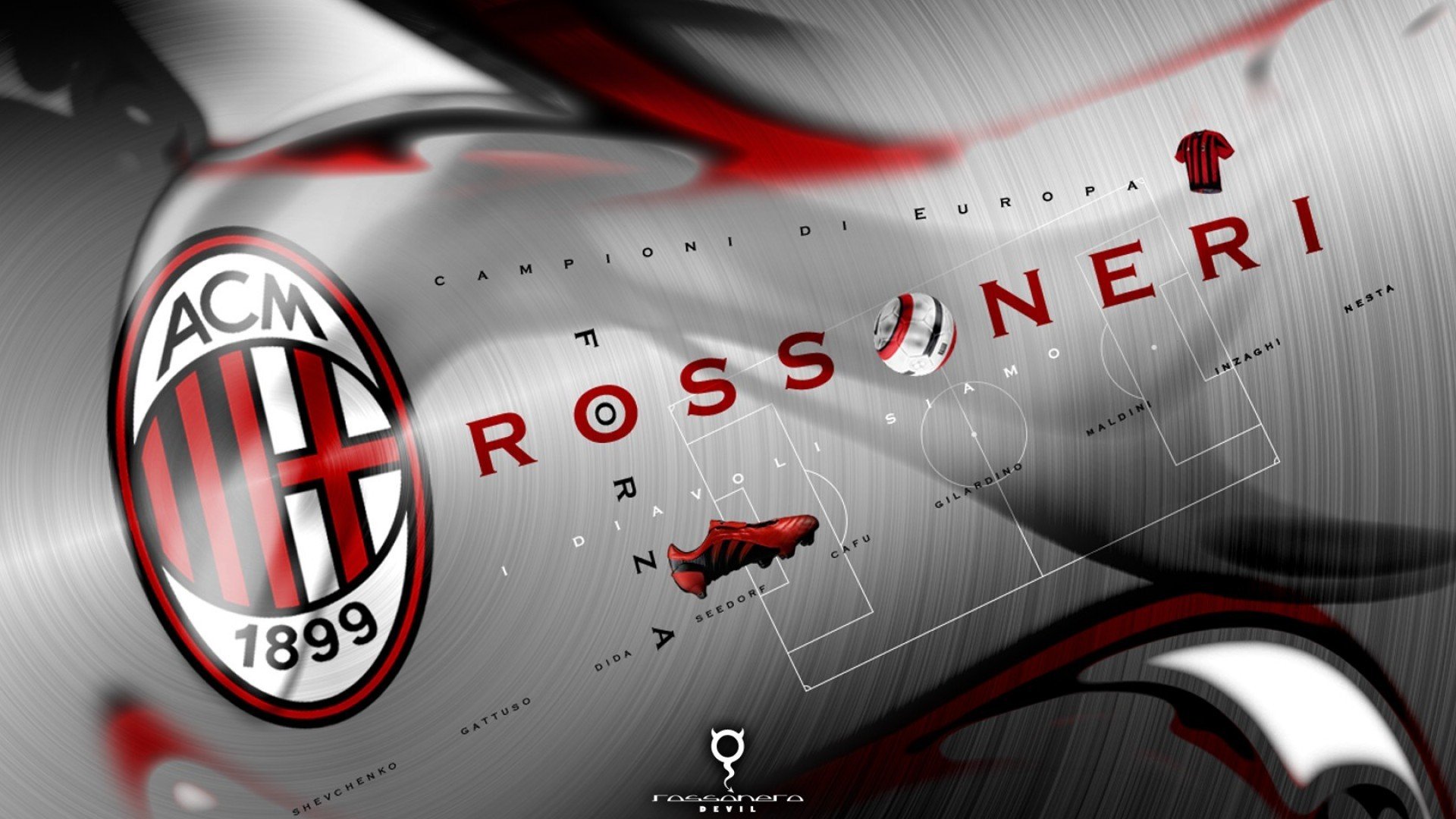 Starting his career at Petrolul in Romania, he was quickly snatched by Dutch champions Ajax in the 90s. After only a couple of seasons in The Netherlands, Andrei was bought by Milan and won countless trophies with the club.

Known as a fierce central midfielder, the new manager is said to bring discipline in the Milan squad, as well as build a team playing free-flowing attacking football.

“I am delighted to be able to finally manage Milan, after playing more than 10 beautiful years here. Milan needs to get back on top of European football. This is my aim. But we need to build slowly. We start by rebuilding the squad with young players and get back to the Champions League. Expect a long process!”, Andrei told the fans at the first press conference.

Asked about the current squad, he answered quite confidently: “We need to free up a lot of the wage budget in order to afford some other players. This summer will be busy.”

SUMMER MERCATO:
As promised, Andrei offloaded several players considered deadwood at Milanello and freed up a lot of the wage budget. Nigel De Jong and Mexes are two of the most important ones.

He didn’t bring up a lot of replacements, but he made a quality transfer in Eder Alvarez Balanta, a wonderkid brought cheaply from South America. Lucas Romero was also signed, but will move to Milanello in July 2015, while Luka Jovic will do the same in January 2016.

Humam Tariq, a young wonderkid midfielder was signed as well, but he is currently only a hot prospect and often playing for the U18 team. 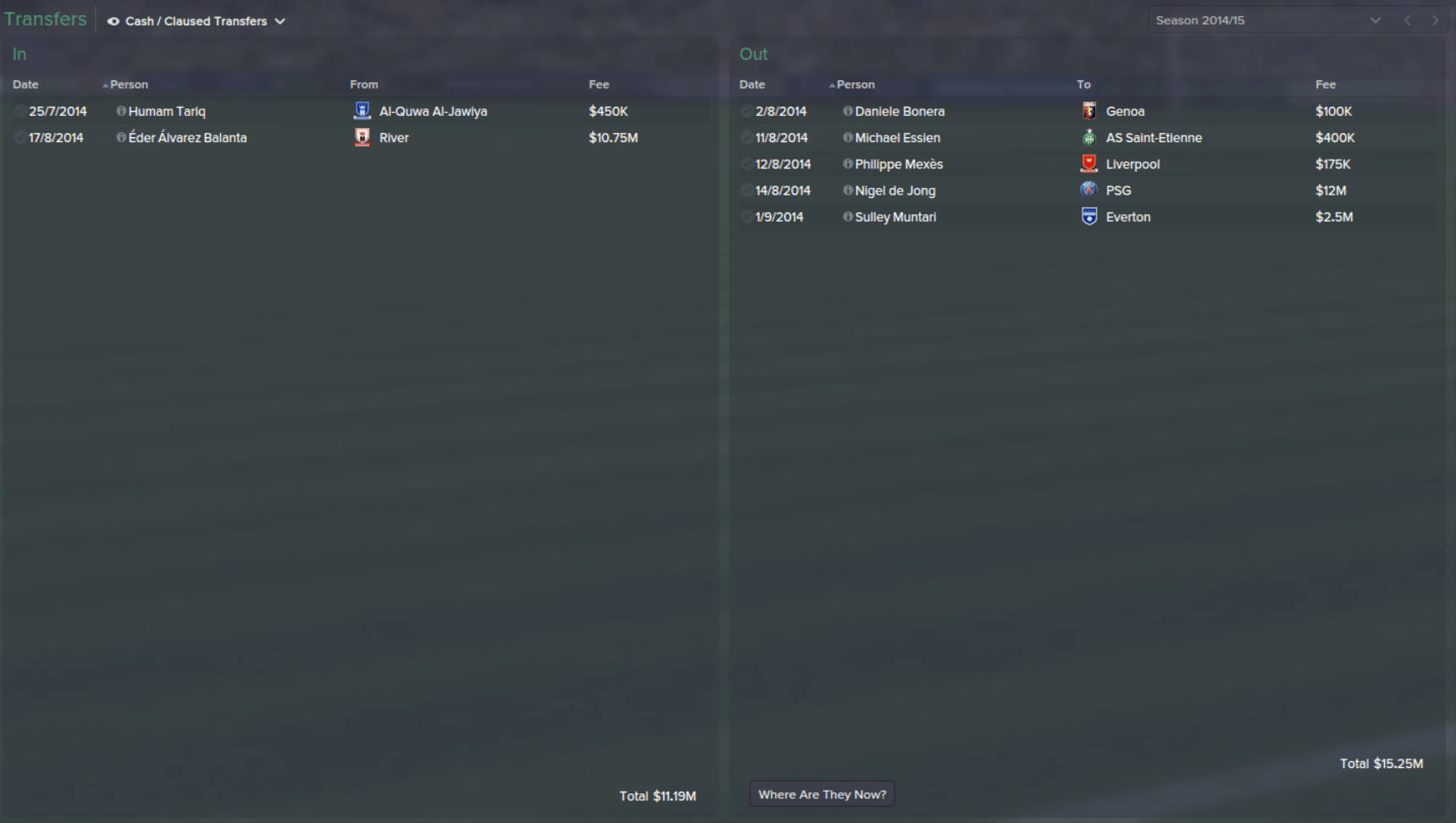 Andrei employs an attacking 4-2-4 and uses the wingers extensively as part of the attacking play. He also tries to bring back the style of the 00s when Cafu and Costacurta ran up and down the flanks and were dangerous throughout the 90 minutes.

The first half of season went extraordinary well, with Milan also being on top for a few games before losing away to an incredible Juventus team. However, Andrei lives up to the expectations until now and shows Milan has the potential to get back on top after breaking a consecutive wins record for the Italian team. 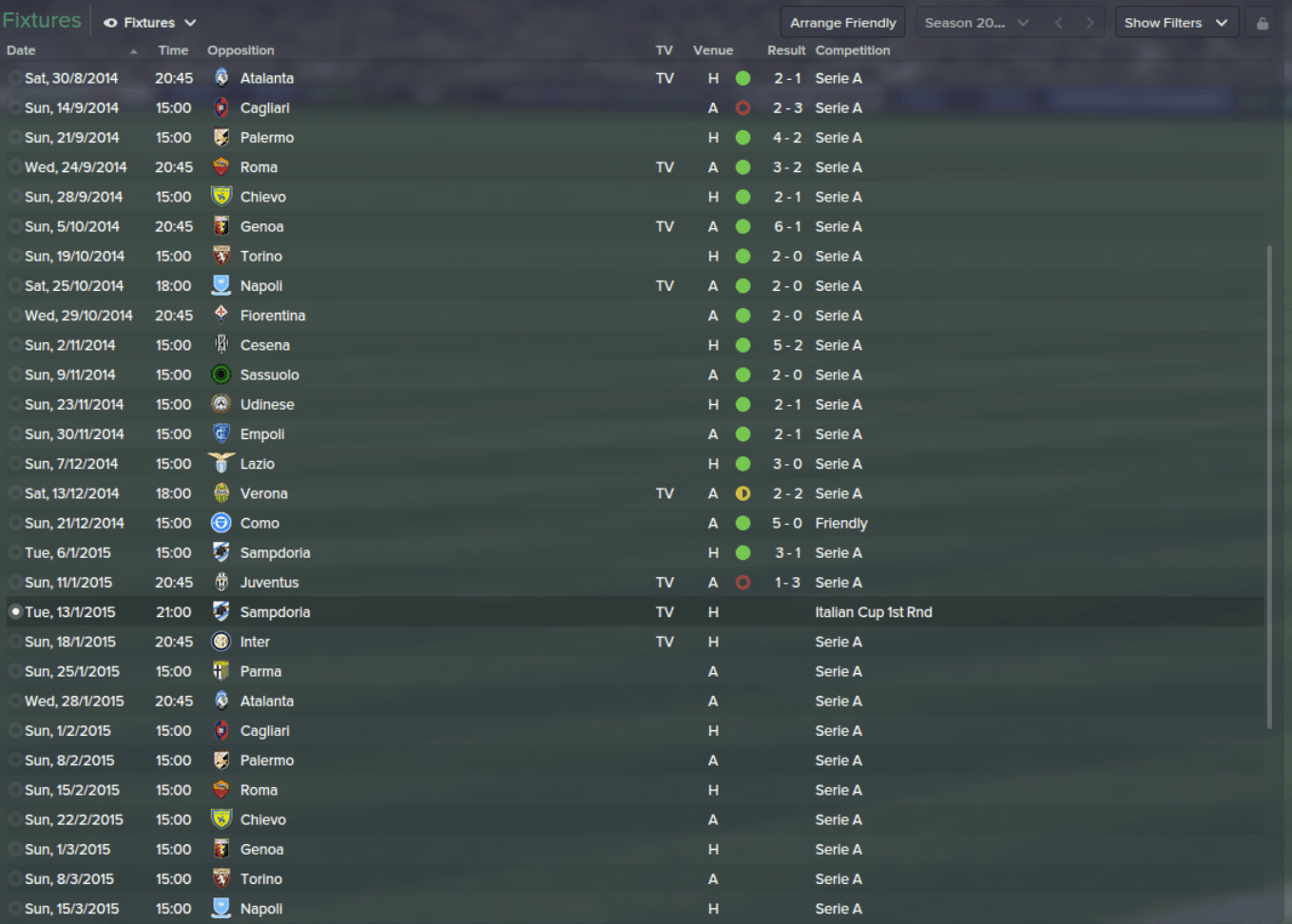 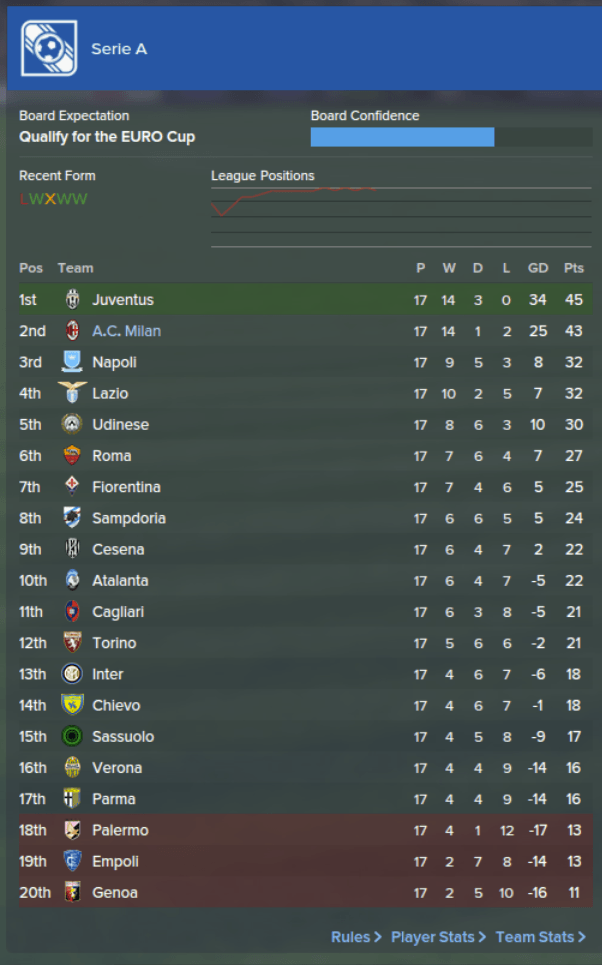 WINTER TRANSFER PERIOD:
While Andrei promised no incoming transfers will be made, he definitely plans on offloading Zaccardo, who played no part in Milan’s success this season. As a relatively high earner, Zaccardo was asked by the manager to find a club for himself by the end of January.
Login to Quote

Justice
8 years
A strong start to the season, seems like a two-horse race!
Login to Quote

Milan slowed down in the last period, after the defeat against Juventus. While they got through the QF of the Italian Cup after a difficult 3-1 win against Sampdoria, Milan was very unlucky not to get all three points in the local derby against Inter. Milan was up 1-0 and 2-1, but Icardi's brance ensured the Nerazzurri take one point home. Milan sits now second, four points behind Juventus.

At the same time, General Manager Adriano Galliani is reported to have informed manager Christian Andrei that because of the club debt, it has been decided to decrease the transfer revenue made available to the manager to 50%.

This makes the tough financial situation even tougher for Andrei, who now finds himself in the position of using only half of what he earns by selling his players.

The leave of absence given to unsettled Diego Lopez, as well as having Alex, Montolivo, De Sciglio and Zapata injured for 3 weeks doesn't make the beginning of the year easy for the Rossoneri.
Login to Quote

TaroMisaki
8 years
why is everyone buying Balante? I guess he is in almost every story

but a good start into the Season and please beat Juventus!
Login to Quote

With only six games until the end of the season, Juventus is still strong favourite to the title. The current holders of the Scudetto had an incredible season, shadowed only by a single defeat to Cagliari, the same team who defeated AC Milan twice in the league and knocked them out of the Cup.

AC Milan unfortunatelly, although they had an amazing season until now, do not seem able to challenge Juventus for the title. At least not this season. The Rossoneri were plagued by injuries in the second half of the season, with Serie A top scorer Pazzini (27 goals) being sidelined for 4 months after the game against Cesena, as well as El Shaarawy injured for three.

While the young Italian winger is on his way back, it seems impossible for Milan to mount the difference of seven points.

Manager Andrei said today at a press conference: "We have to accept the fact that we did our best this year. There are six games left, but our target is still the 2nd position. We started the season aiming for a Europe League spot and we did much more than that. I am proud of the guys."

Asked about the transfer period in the summer, Andrei answered reluctantly: "I have no plans yet. It is too early. But it will be a busy summer, with players both incoming and outcoming." 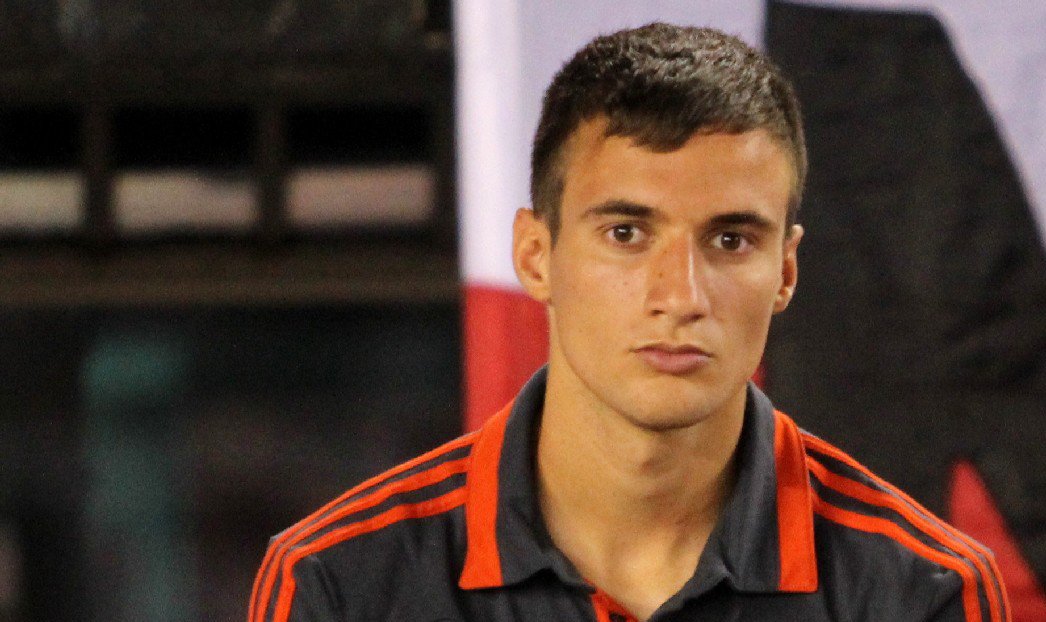 While Milan seems to be ready to sell high-earner Montolivo, but also Rami, Zaccardo and Albertazzi, they just signed young defender Emanuel Mammana from River Plate for a fee in the region of 10M. Lucas Romero will also join the Rossoneri in summer, after being signed already last summer.
Login to Quote

Icarus
8 years
Nice story, you've been signing all the top wonderkids in the game haha, surprised not to see Luka Jovic.
Login to Quote

sadak
8 years • Edited
... Signed Jovic as well Icarus. He's arriving in 2016. My story is my story, my way of playing is my way of playing... if you don't like it, you don't have to follow it. It's as simple as that.
Login to Quote

Hashim
8 years
Good Story C'mon you can win the league.
Login to Quote

The 2014/2015 Serie A season ended today and what a season it was. With a Juventus in fantastic form and a Milan who, until late in the competition, hanged onto the Champions, the Italian League was really exciting this year. While there is no surprise Juventus wins it all with 98 points, the season’s surprise was indeed AC Milan. 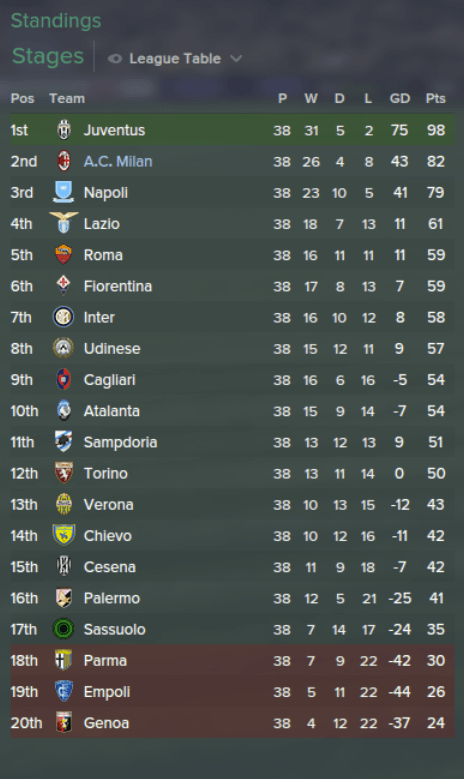 After ending on 8th last season and missing out on European football, newly-appointed manager Christian Andrei promised a revolution. It didn’t happen yet, but we can definitely see where Milan is going under the guidance of the former Milan midfielder.

After selling a number of high-earners in summer and buying only one first-team player, Andrei also brought fresh air on the tactics plan, employing an offensive tactic which made Pazzini topscorer with 29 goals, although his season was already over in March due to injury.

Milan hanged onto Juventus until late in the competition, but three defeats in a row made them finish 16 whole points behind the Champions.

Milan’s challenges for the next season are definitely continuing to freshen up the squad and improve the defence, which proved to be Milan’s achilles heel this year, but also stay away from injuries, which made the second half of the season very difficult.

OUTGOING: Montolivo, Rami, Zaccardo, Albertazzi and El Shaarawy on their way out. Armero and van Ginkel are ending their loan spells too.

INGOING: Milan needs a left back, a central defender and a replacement for El Shaarawy (Dorin Rotariu from Dinamo Bucharest is in the works). Also a striker, if there are extra money in the transfer kitty.

You are reading "AC Milan - Getting right back on top".