charlesingram
8 years
I'm not very good at Football Manager. Because I've never played it before, but I saw there was a forum about it so I've decided to put my first FM career up on here. I've never even played this before so it'll be quite funny to see what happens.

Here is a summary of our first few results. 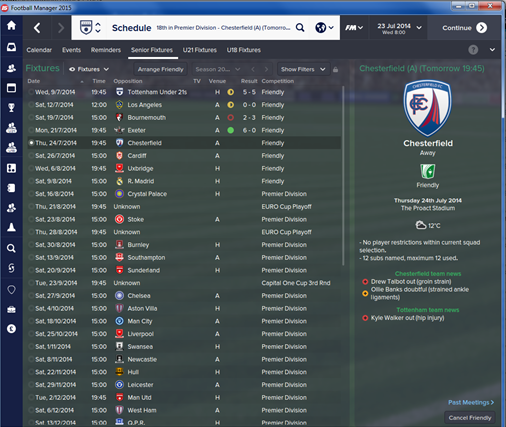 I'm going to manage Tottenham because I want to a team that has the ability to do quite well but never really gets anywhere; Tottenham can't really get past the Europa League. So that's why they've decided to employ a former Sunday league player with no previous managerial experience to take them to the Champions League!

I had a friendly against the U21s just to see how the team was like. But the assistant manager suggested to give them four players as they needed fitness. I said yes, might as well. Turns out he gave them Eriksen and Lamela, probably our two best players. I don't know what he was even thinking.

It won't let me upload the file because it's too big, but the game ended 5-5, Lamela scored from about the halfway line. Then, to add to the misery, we went off and drew 0-0 to LA Galaxy, but that's not the worst of results.

And to make it even worse, Vertonghen came along and said he wanted to leave. We had a "talk" which I ended up messing up because it made him want to leave even more. He said his dream is to play for Barca, and I say keep dreaming. 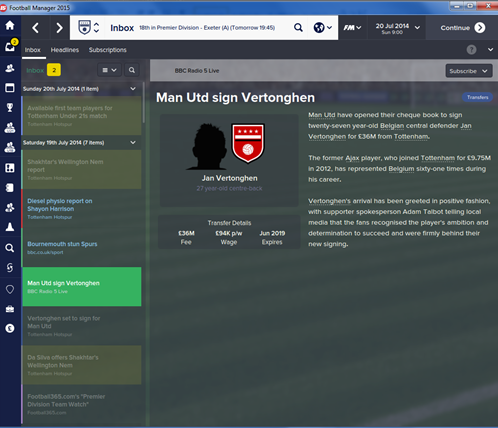 I needed someone to replace him, so after a bit of scouting which took me a while to figure out how to do, I settled on Jeffrey Bruma who wasn't too much considering I got a lot of money from selling Vertonghen. The results were terrible, so I don't know if my goal is going to be reached

SerhatBora
8 years
Bruma is a good replacement for Vertonghen i guess. Keep it going mate!
Login to Quote

You are reading "Tottenham: To The Champions League".