Finally, Real Madrid have won their 10th champions league or ''Le Decima' but Carlo believes that they can go even further and break all the records that they can possibly do.

''We had a very good season, the players were fantastic, its a shame they have no break as almost all of them have a world cup to go to, but after the world cup concludes, it will be straight back to work to make this team win everything that is possible. This team has so much potential and I will keep working to making it the best team in the history of football and smashing all the records that we still have not managed to do yet.

Almost all of Real Madrid's squad will be in world cup action over the summer, so the possibility of injuries is a real concern, as there have been many rumours regarding the future of some players at the club.

Sky Sports can now confirm the official capture of James Rodriguez from Monaco to Real Madrid for a reported fee of £71M. James was one the stand out player out of this years world cup, winning the golden boot and keeping his nation all the way to the quarter finals before being eliminated by Brazil 2-1.

James Rodriguez has been a real rising star in Europe, making a new for him self first in Portugal with FC Porto and then moving onto France with Monaco where he had a phenomenal season. 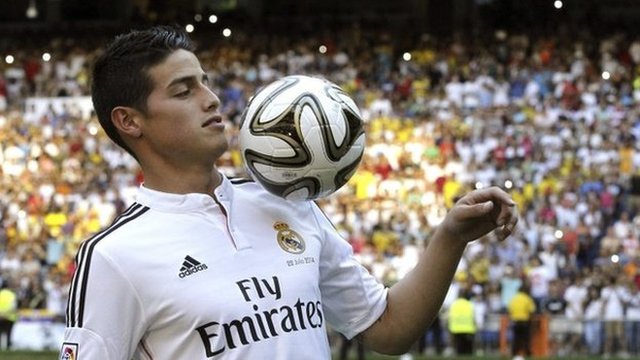 It is a honour to have signed for the best team in the world, joining a team like Real Madrid is what dreams are made off and what a player aims for in their career. I would like to thank Monaco for such an amazing time, It was a real stepping stone in my career and i cant wait for my career to really move forward with Madrid.

So one signing down for Real Madrid, but there have been further reports over the future of Di Maria, the singing of James could mean the end of the road for Di Maria's career at the club, who he joined Real Madrid from Benfica.

You are reading "El Galacticos: Le Decima And Beyond".