Life at the Emirates stadium will never be the same after it is confirmed that Arsene Wenger decided to resign from the post of coach. The Frenchman spent at the club almost 20 years so his decision is a big shock for all Arsenal's fans as well as for the whole football community.

After winning FA Cup last season, Wenger apparently felt this is a perfect moment for his departure. According to Steve Bould, his long time associate, the Frenchman is confirmed he leaves the team in great shape. The financial situation of the club is great so the new boss will have plenty of money to spend; however, the players who are already in the team are also high-class footballers who can win more trophies.

The name of the new boss will be known in a few days and, according to rumors, it will be a man recommended by the Wenger himself.

In the next episode I will reveal name of the manager and my goals which I want to achieve during this save.
Login to Quote

This is quite unexpected news for most people from the football community, but at today's press conference the board of Arsenal London has officially confirmed that Thierry Henry, one of the best players in the club's history and also a former captain, will be Arsene Wenger's successor as Arsenal's manager.

Despite the fact that Henry has no experience working as a couch at all, Arsenal's fans seem to be pleased and satisfied with this decision as they still remember many of his outstanding performances for the club. Chips Keswick, the chairman of Arsenal, admits that Arsene Wenger had a meaningful input into the board's decision as they respect him a lot and believe in his great knowledge and intuition.

Wenger, when asked directly about Henry, said: "He may have no experience as a couch, but I know him very well and I'm sure he can handle the job. He has all necessary personal characteristics to be a manager - he's ambitious, patient, and, what is really important, he is highly respected by the younger players. Plus, he loves offensive football so Arsenal's fans shouldn't be concerned that the style of play of their team will change"


SUBSEQUENT GOALS:
- repeat 'the invincible' season
- finish a whole season without a single loss
- have a player who wins FIFA Ballon d'Or
- have only home grown players in the team after about 8-10 years of playing
Login to Quote

MisterLister
5 years
I was asking myself when is someone going to start story with Henry in Arsenal, and here you are. Good luck!
1
Login to Quote 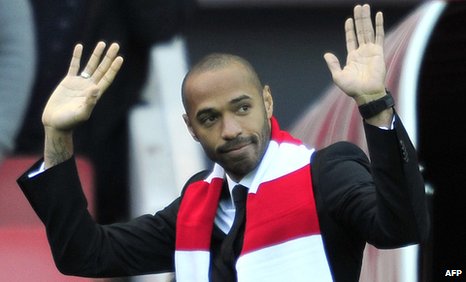 My first day in the club was mainly about organizational issues. Firstly, I met with the chairman and I signed a short-term contract which expires 30.06.2015. Then I went to his office where we had a long conversation about his expectations of me and the club's strategy. We both agreed on the following points:


Later, I went outside to meet all my associates and, finally, the players. I've talked to each of them and now I have in mind the initial plan how to assemble my team. There are many great and talented players so I decided not to make any transfers in the first transfer window.

Preseason at the Emirates passed quiet well as our team won all 9 exhibition games. Although I'm aware that the opponents were not too strong I'm pleased that my players showed their commitment and passion in each of these games.

Unfortunately, some of the players (Ospina, Walcott, and Giroud) missed the whole preseason as they suffered injuries. On the other hand, it was a great opportunity for players from Under 21's team and such youngsters as Hector Bellerin and Chuba Akpom really impressed me which resulted in their promotion to the first team.

In the meantime I decided that Mikel Arteta will remain the captain of the team just as Per Mertesacker will stay as number two. I was thinking about entrusting the role of Capt to Jack Wilshere but I finally realized that maybe it is still too early for him.

On Friday 8th August the Champions League Playoff draw took place and it turned out that Besiktas will be our last barrier on the way to the tournament. The first leg will be played at Emirates Stadium on Tuesday 19th August.

My first official match as Arsenal's manager ended with failure as Man City beat us 2-1 in the Community Shield. Nevertheless, I'm still happy with my team's performance as we showed some good actions and our early season form appears to be promising.
Login to Quote

After busy preseason it was time to go back to more serious games. The season-opening game against Southampton was a big success as we played amazing football and demolished our rivals 6-1. Alex Chamberlain scored a hattrick and was declared the Man of the Match for his great performance.

3 days later the Emirates hosted Besiktas, our opponent in the battle for promotion to the UEFA Champions League. The Turks played very solidly but thanks to goals from Bellerin and Wilshere we managed to get the victory 2-1. The fact we conceded a goal slightly bothers me; however, I am pretty confident that we will promote to the group stage.

On 23th August we went to Manchester to play against City. I knew it would be a very hard game but still hoping that we can achieve at least one point. The first half seemed to be quiet even; however, after Koscielny's foul on Dzeko City got a penalty which was turned into a goal by Yaya Toure. In the second half Flamini got a second yellow card and soon after that Dzeko scored the second goal for his team. I hope next time we will finally take a revenge on City.

Then we went to Istanbul for the crucial return game against local Besiktas. Thanks to another Jack Wilshere's goal we were leading 1-0 but ten minutes before the half-time Demba Ba made use of Koscielny's fatal mistake and scored an equaliser. Luckily, the match ended with a draw and we could enjoy promotion to the UEFA Champions League Group Stage.

The last game in August appeared to be quiet easy as we demolished QPR 3-0 at the Emirates. Danny Wellbeck and Mesut Ozil had great contribution in the victory as they both scored goals.

sieninen
5 years
The results haven't been too flattering so far, except the 6-1 thumping over southampton. But good luck for the future and keep it going!

You are reading "My Arsenal Project".