With pre-season kicking off around England everyone is gearing up for a competative battle year and without fail we carry on our "Team Review" section. Today we will be reviewing Sheffield United's chances this campaign. Nigel Clough who joined mid-season after being sacked from Derby took over the Blades, he had avery succsesful cup run, reaching the semi-final of the FA Cup only to be knocked out bu fellow rivals Hull City. T hings didnt end so well for the Blades last season finishing 7th in the league prior to them being the bookies favourites too win the league. Well the bookies seem to be posative that the Blades are going for promotion as they 6-1 odds on winning the league.

Nigel Clough released a statement about the Blades up and coming chances of the season ahead and how they were going to go about it. "We're a strong force and if we all stick together we can beat this division, no problems" Clough seemed very confident in his team and the abilities they possesed. When asked about his sacking from Derby the previous term Clough responded "It was a shame to leave Derby but Sheffield United is my home now and I'm determined to emulate my fathers footsteps and become the greatest manager the english division has ever seen", strong words from a strong man who will be hoping his team can get back into the championship next season. 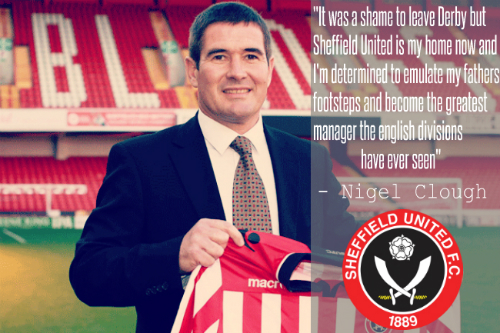 One of Clough's new signings Kieron Freeman who arrived from Derby was extremly delighted to be back with his former manager and had all good things to say about the Northerner. Freeman expressed his gratitude to the Sheff United manager and thanked him for the chances he got at Derby and hoped he can continue to impress the manager to earn a spot in the first eleven for this up and coming season. Freeman expressed his feelings on Twitter after posting a tweet on the social network site saying
"I'm glad Nigel brought me here, he is a great manager and he can really take this club places" It would seem that everyone is in high praise for the new Blades boss and more so coming from the Blades captain himself who was interviewed by a local paper. 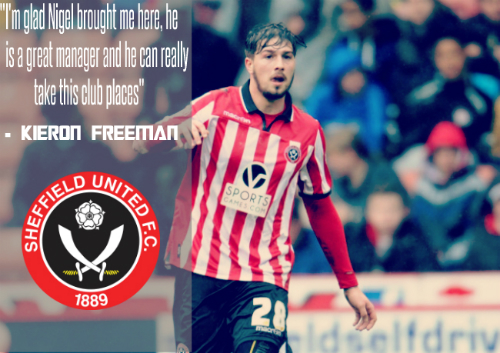 "Freeman in action for the blades"

Michael Doyle the blades captain had a few things to say about Nigel Clough and seemed very positive about him and admired his background and abilities. When interviewed about the new manager one reporter asked "What are you're thoughts on Nigel and his presence at the club?" Doyle responded full of praise for the northerner "Its refreshing to have such a positive manager at the club its like a breath of fresh air. Nigel is a great manager and so was his father Brian Clough, hopefully under Nigel he can guide us to the top flight of the english division" The club captain will be hoping to retain his captaincy for the season and continue to impress Nigel and gain first team football. 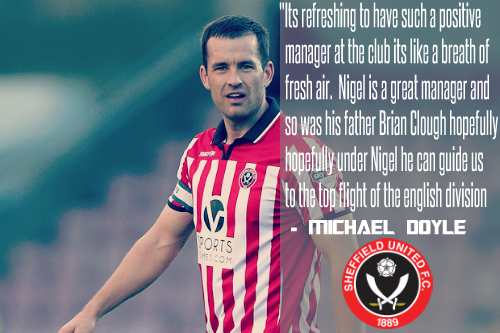 Its going to be a long season for the Blades but under Nigel's guidence I believe the Blades will be playing second division football next season. Its yet to be said if Nigel will dip into the transfer kitty for this season and purchase a few players we will have to see, but there is a reason they are odds on for the title, there a side with a burning passion to play top flight football, watch out Premier League the Blades are coming.

By, James Giles
Login to Quote 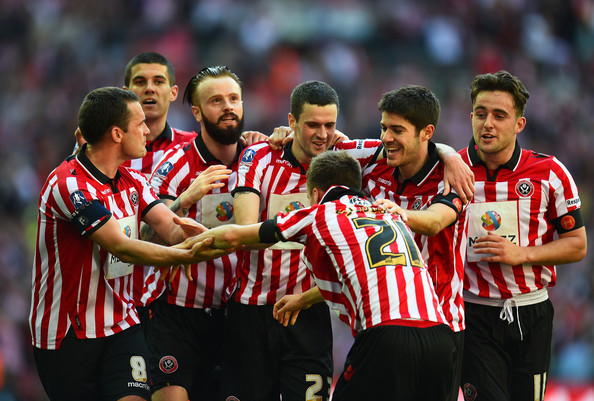 As pre-season comes to a close the new sky bet season is in full throttle as all 3 leagues gear up for there first competitive game of the season. Our feature team in this article is Nigel Clough's side Sheffield United. Sheffield United who kick off there first game of the season against rival team Oldham have had a topsy turvey pre-season are lucking to be in for a good campaign this season having been made the bookies favourite for promotion this season. Nigel Clough has been busy in the transfer window but only in a specific area and that is the loan market. Clough admitted funds were limited for this season so the loan market was the 'Obvious' choice this year. There are a lot of benefits in the loan market and Clough has seemed to taken advantage of these benefits making a total of 4 signings all together, all being loanee's.

Clough released a statement saying he was proud of the signings he had made this window and was confident that they could help greatly in there bid for promotion. Clough signed 2 premier league youngsters and 2 championship youngsters all who are up and coming stars in the game. To check out the Blades signed this season check out the article below. 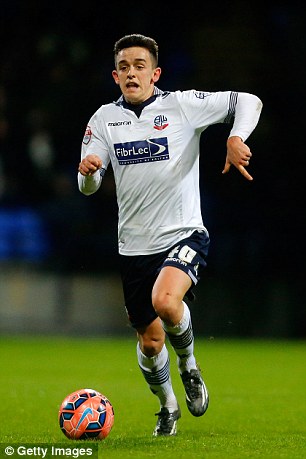 On Loan From Bolton

Media thoughts: Zach is a up and coming talent in the game and has risen at Bolton, I'm sure that the loan will benefit him greatly at Sheffield and If he performs well he could stay on a permanent and Bolton could gain some cash. 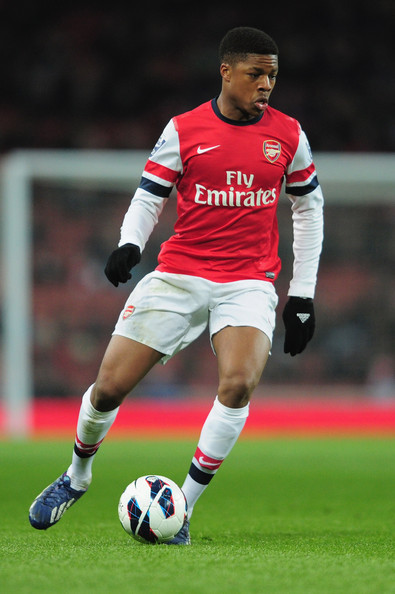 On Loan From Arsenal

Media thoughts: Chuba has lifted heads at Arsenal and he looks like a promising young player. Arsenal will be glad to see him gain experience and hopefully they can re-evaluate his position when he returns to the club.

On Loan From Brighton

Media thoughts: James has a lot of experience but still has a lot to gain. Moving to Sheffield is a good career choice and I think he will fit in there nicely. Sheffield are short on central midfielders so they may even make this a permanent if he performs. 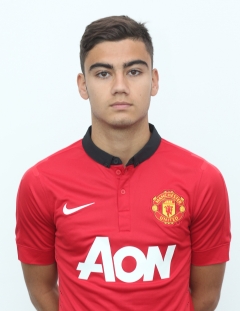 On Loan From Man Utd.

Media thoughts: Andreas looks like the next Adnan Januzaj, an odd comparison given the two players ages but Adnan is already a great player and I believe Andreas can follow him. Sheffield United should do everything they can to keep him at the club although united will want a big transfer fee. 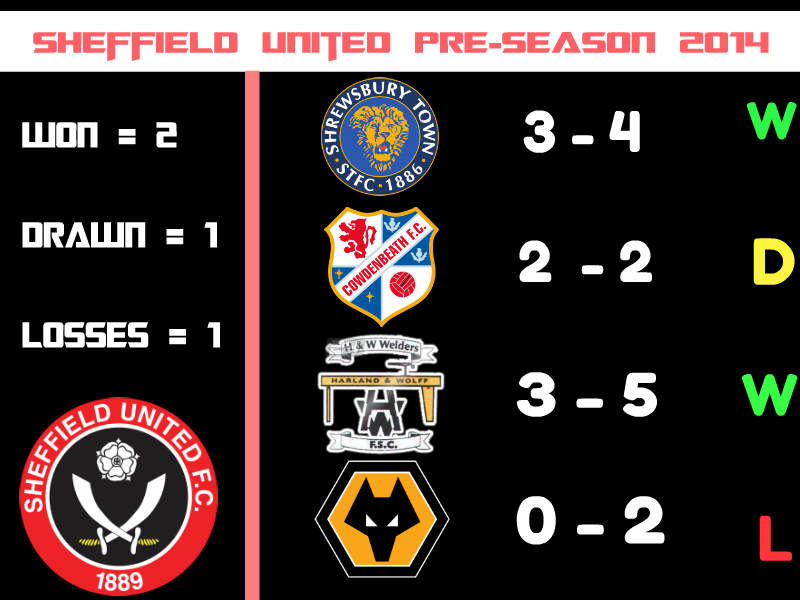 Managers Thoughts: Pre-Season was okay but the best thing is that we won more than we lost. A draw against Cowdenbeath wasn't ideal but a win against Shrewsbury and a high scoring thriller against H&W was impressive. The new signings impressed and it will be interesting to see how they fair in the league opener against Oldham, a must win game. Its going to be a long season but one I think were up for, fingers crossed its the year of the Blades.
Login to Quote

InvertedWingbacks
7 years
some excellent signings there bro! and some decent results too; great start man, and I love your update style
Login to Quote

MisterLister
7 years
Good signings with some good results, and I really like your graphics. Keep it up!
Login to Quote

@Denzy - Yeah pre-season was iffy, but I can tell you tell you august was exiting.

@MisterLister - Yeah the signings were good, and cheers I do try

As the season is well under way and we hit September we look back at Sheffield United's first month this season. The Blades managed by Nigel Clough are looking for promotion this season and will hope that they can achieve that under the former Derby man. August saw Sheffield United play teams such as Oldham in there opener and a cup tie against Colchester. Sheffield are sitting 8th in the league after what seems to be a positive month but teams around them performed slightly better than them.

Clough released a statement telling the press that he was "Happy" with the clubs performance this month and wouldn't be "Changing" things about to much. It was interesting to see how the new signings faired in the august month and whether they had settled into there new homes on Yorkshire. Zach Clough had average month scoring 2 goals but will be happy to be off the mark for his new club. The Blades did well in the cup this month playing Rounds 1 & 2 in the capital one cup, to see how the Blades did in August see the article below. 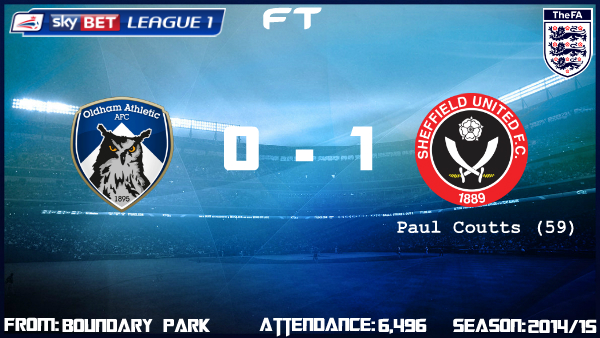 The Managers Notes: A great result against a very tough Oldham side. I like Oldham they deserve to be doing a lot better than league 1 so its very pleasing to get all 3 points in the first game of the season. It was disappointing that we couldn't open the season at home but all is good 3 points here, good result. 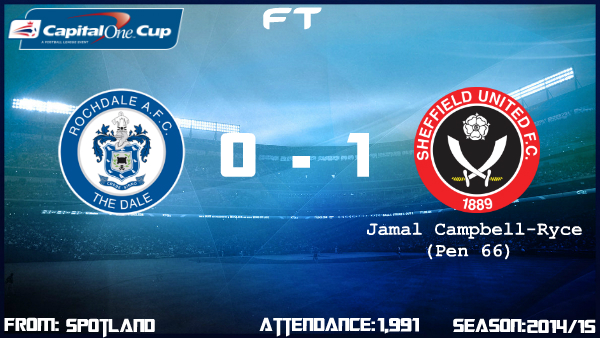 The Managers Notes: Another great result a cup run is always nice and we did so well last season in the FA Cup which means there is no reason why we can't go on a run in this one. 1-0 was a little worrying as Rochdale are a league below but a win is a win and we have dawn Wigan. 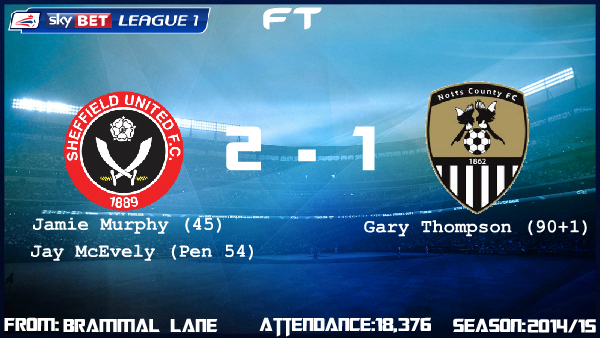 The Managers Notes: Unbeaten in three games a great way to start the campaign. 2-1 was a fair result on the day a shame we conceded so late on but we dominated throughout. Everyone has been working hard in training and are all getting along there is a good feel around the place 6/6. 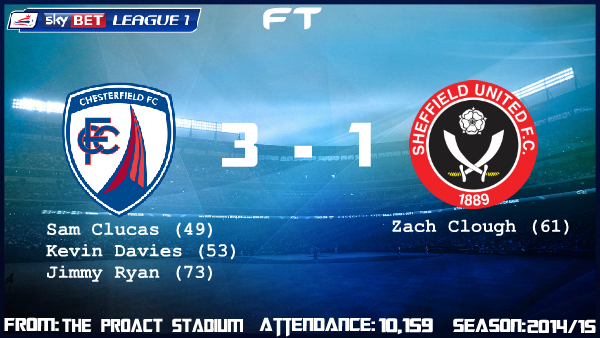 The Managers Notes: Well that certainly brought us back down to earth, a disappointing result and credit to Chesterfield they deserved every point. We weren't at the races and I let my boys know how disappointed I was, but onwards and upwards. 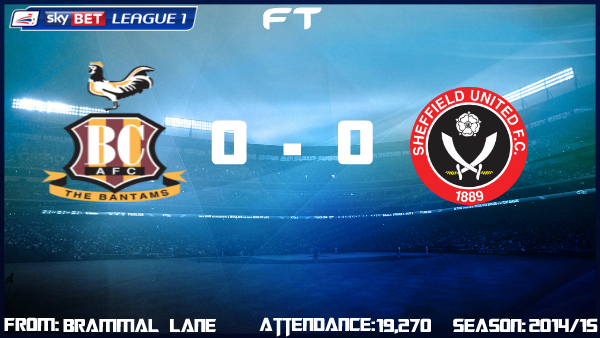 The Managers Notes: A bore draw but better than a loss, the lads battled hard out there but as we know Bradford are a strong side and can beat even the strongest teams. We did well to get a point and we played better than the previous game so back to winning ways soon.... I hope.

The Managers Notes: What a fantastic win for the lads, they truly played incredible. Wigan are a strong side and have were only in the top flight a few years ago so to beat them was a great moment. We dominated from the off and that sends into the 3rd round hat, I wonder who we will get next?? 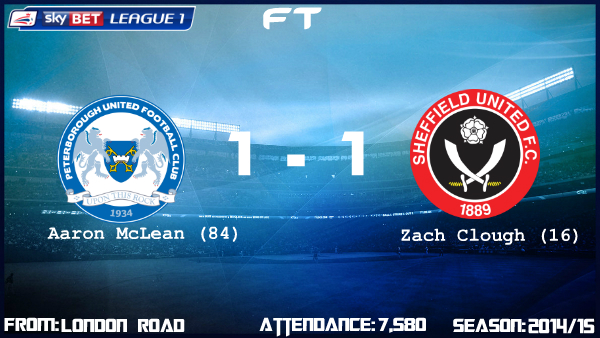 The Managers Notes: A good way to round of August although a win would of topped it. The posh are a good team and I'm surprised they're still in this league. A point was a fair result on the day and we played really well, Im looking forward to September now BRING IT ON.

Iconic
7 years
Nice month defence is looking good if you score a few more then I'd say you're big title challengers.
Login to Quote

Denzy
7 years
Don't need to say anything about your month, You drew to Bradford xD
Login to Quote

You are reading "Sheffield United - "Emulation"".