A Night In Johannesburg 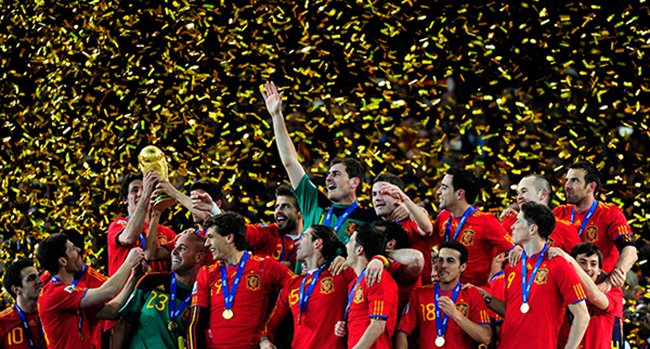 This was one of the best nights of my life. Who knew a gamble on such a (presumably) unwinnable TV competition would have me in Soccer City watching the World Cup Final of 2010 unfold right in front of me - Watching my home nation bring home the World Cup. Never has Spain experienced such glory...Not even the 2008 European Championships came close to this.

At the start of this competition everyone knew Spain's quality on the field. Xavi, Iniesta, Silva and many more all graced us with beautiful, quick, sharp passing moves that we had become accustomed to over the last couple of years. Those moves rounded off by the likes of Torres and Villa who both helped everyone onto that plane to South Africa.

We were among the favorites to win the tournament and rightly so. The only teams given hope against ourselves were Germany, Brazil, the Netherlands and Argentina maybe - So you can imagine how broken we were after a loss in our first game to Switzerland.

The loss proved to serve no purpose as we blasted our way out of the group with wins against Honduras and Chile. Days later, a series of narrow wins over Portugal, Paraguay and Germany saw us into the final against Holland where we would play out the dirtiest, most brutal World Cup there ever has been.

We pulled through though, and Iniesta was the one who allowed us the rights to our celebrations that lasted all through the night. I watched most of the competition hungover a bar in the hotel I was staying at, I knew then I'd be going to the final but I didn't know I'd be celebrating my own country's success. The aftermath was quite something. We sang, cheered, drank all through night until we just couldn't go on any longer. Most people even went on through the day and the evening after that.

I however woke up two days on from the match with a drive and passion that I had never felt before in my life brought on by the inspirational performance from Spain. A fire had awoken in my belly; I felt as though I'd achieved nothing in my life thus far and that it was time to do something about that. it was too late to be thinking about a footballing career. I may have once been good it enough - potentially - but I'd wasted my opportunities, and at 39 years old I'd be mad to even think about it. But it wasn't too late...A managerial career? I thought to myself.
Login to Quote

MJK46
6 years
Nice start to the story there. I wish you the best and the most success. I will be following
1
Login to Quote

Cappy13
6 years
Brilliant start will follow this
Login to Quote 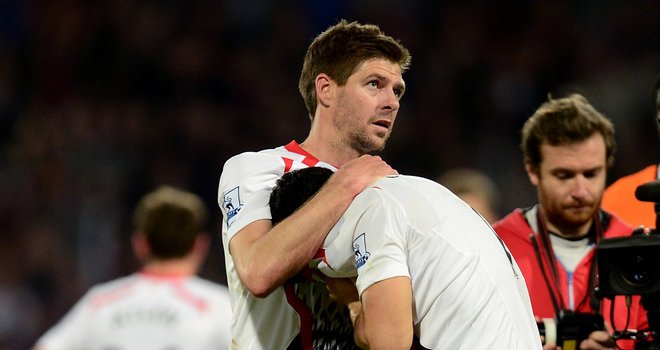 The World Cup 2010 was one of the best nights of my life in terms of football and four years on, it was about to get better - Or so I and millions more began to believe. Liverpool, my favored club were steam rolling the league, and with a recent win over second placed Manchester City we looked as though we were about to win our first title for over 23 years.

Then along came Chelsea and Crystal Palace. We'd been fantastic all season mostly due to the brilliance of Luis Suarez and Daniel Sturridge but after the City game we just folded. A point would have been good enough against Chelsea, but somehow we were beaten. Three points were needed over Palace...and somehow we drew.

What made the night worse was that I was even there to watch the rapid decline of my supported clubs season. 3-0 up to 3-3...The title was out of our hands. We'd practically given it to City who eventually went on to win the title.

I'd experienced lows in my time as a Liverpool supporter, as well as many highs following them as a youngster, but never had I felt so down when it came to the Reds. Our wait for a title would continue and we'd remain a joke to all of our rivals.

Not only did Liverpool fail to produce when it mattered most but even Spain put in the most pathetic attempt to battle off other Nations in order to retain their title as World Champions. 5-1 to the Netherlands. Disgraceful, shameful, embarrassing.

In 2010 I thought to myself about how much I wanted to experience the feelings that winning a cup as prestigious as the World Cup brings. In 2014 I looked upon my supported club and country from the stands and thought - I could do better.
Login to Quote 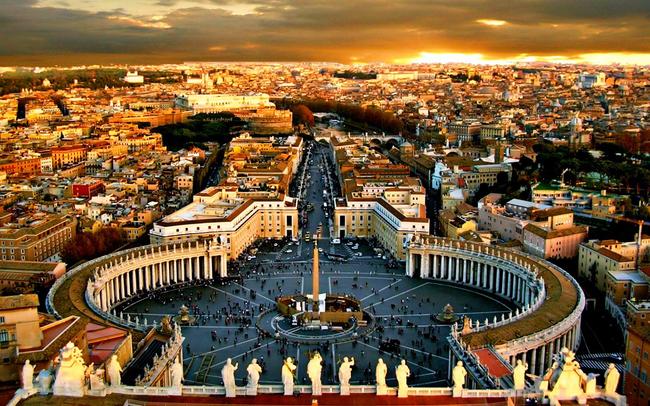 It's beautiful isn't it? Barcelona. Well to me is. Although it might not look like much to you; this is home in my eyes. It's a lot different now compared to what it was when I was young, but this is where I grew up and I'll forever consider it my favorite place to be.

As a youngster I was always out with friends playing football. The hot climate meant there weren't many places to play, so we often used the beach. We did things samba style. No shoes or socks. That really did aid us in improving our technique and it's probably why most Spanish/Portuguese teams are so good with their feet.

I loved my football, and really when I was growing up there were two teams that had the power to stand over anyone in their way. Liverpool and Real Madrid. Now as a Catalan I couldn't fathom Real and although Barcelona weren't as special as they are now I still followed them. Honestly though there was only one true team for me and that was the Reds from England.

I've never been a fan of English football or even England itself as a nation but the football that Liverpool brought to the pitch was sensational. No English team could replicate it - Only the likes of Real with their slick passing or Ajax with their total voetbal came close. I felt a connection to them and so I followed them as a youth and all the way through to my adult years.

You see I watch a lot of the teams playing these days and I just feel like I could do a better job than any of the managers at any team and that's why I've worked hard to secure my coaching badges. As a man with his continental B licence, I should have enough qualifications to secure myself a place at a lower league side.

Where will I go? I don't know. I'll probably leave for anywhere that my applications take me. If I secure a job in Spain then I'll remain in Spain. If my application is successful in England then I'll go to England regardless of my dislike for the country. Anywhere in Europe I'll go, I just need one chance and I'll make myself a great in football. Roque Eusebio will go down in history.
Login to Quote

MJK46
6 years
Excellent. Who ever this manager is will be a champion someday
Login to Quote

InvertedWingbacks
6 years
Amazing start man - keep it up! Can't wait to see how this pans out
Login to Quote

Aaron
6 years
Cappy: You'll have to wait and see, who knows

Bayern: Let's hope so my friend

InfraRed: Thank you, I'm sure we're in for an exciting ride with this one

Justice
6 years
Very good writing, can you provide us with some FM now?

Aaron
6 years
Note: Just want to let everyone know that from Sunday I am on holiday until the 25th so between Sunday and then there will be no updates from me. Between now and Sunday though, there should be 1 or 2. It will continue as soon as I've settled back in at home. Thanks

You are reading "The Journeyman".