AlexTHFC
7 years
Tallery: Thank you! What with the 'domination' he's gonna have with this other manager, he should be fine.

Zap: You haven't even seen him play for me.

LLMCrumble
7 years
Loving this so far, looks very good and you inspired me to start my own Middlesbrough save and story

Maximus
7 years
Kishna has less of a clue than Carver!
Login to Quote

Lenny
7 years
So when's the song being released?
Login to Quote

Maximus: No, no, no, Carver knows exactly what he's doing in life

The 32 year-old left Everton this summer, after two years at the Toffees. He made just 14 appearances for Everton in the time he spent at Goodison Park.

Middlesbrough’s signing of Alcaraz had been rumoured for days, with the lack of reliable centre backs at The Riverside Stadium sticking out like a sore thumb.

Whilst playing for Wigan, from 2010 to 2013, Alcaraz won the FA Cup final against Manchester City, scored the goal that relegated Blackburn Rovers to the Championship, before being relegated themselves, and caused controversy after spitting on Richard Stearman.

Not that it’s unlike a Middlesbrough-associated person to release spit.


Kike Middlesbrough Striker
”I am very pleased to have a person like Antolin joining the club - we have a lot of quality young players and his experience should help them develop into fantastic players. He is a solid centre back and I look forward to playing with him.”


Leighton Baines Everton Left Back
”Antolin is a great player, and I have no doubt that he will serve Middlesbrough well. At Everton, the competition was too high, and he struggled under the pressure of that kind of Premier League football. However, I wish him huge amounts of luck for the remainder of his career.”

Alcaraz’s career began in 2000, when he signed with Teniente Farina. A year later, he joined Argentina’s Racing Club de Avellaneda. In 2002, he was loaned out to Italian side Fiorentina, but in these three years, played 0 games.

In 2003, he joined Beira Mar of Portugal. He played 112 games in the five years he was in Portugal, scoring 5 goals. He gained club captaincy and helped Beira Mar reach promotion to top flight football.

Alcaraz then moved to Belgium to play for Club Brugge in 2007. He became a first team player and made 68 appearances, scoring 5 goals. Eventually, he helped Brugge to two 3rd placed finishes and a 2nd place.

As his contract with Brugge was due to expire in 2010, Wigan Athletic of the Premier League snapped him up for an undisclosed fee. In another 68 games, he scored 3 goals and won the FA Cup in 2013. He then caught the attention of Everton, where he played for two years from 2013. 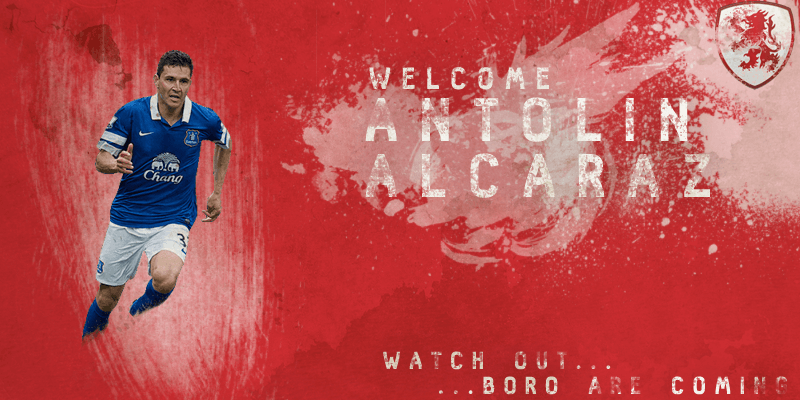 The image Middlesbrough used to announce Alcaraz’s signing, accompanied by the caption: “The first addition to the Boro squad this Summer! #boroarecoming”.
In Alcaraz’s international career with Paraguay, he has scored twice in 26 games. He was first called up in November 2008, and was then called up to the FIFA World Cup in South Africa 2010. In 2011, when the Copa America took place, Alcaraz was again first choice for Paraguay, where they finished in 2nd.


The signing of the Paraguay international was confirmed on Twitter, with the above photo and caption. Later on, in an interview with Sky Sports News, new Middlesbrough manager Santos Damiano said the following words, ”We at Middlesbrough are delighted to welcome Antolin Alcaraz to the club, and hope he serves our club well for the time he plays there. I am confident that he will be a wonderful asset on and off the pitch, helping our younger players develop into first team players in the future.”

”This is not the end of Middlesbrough’s transfers. We are always looking for ways to improve our team, and we are looking into several other players we wish to bring to The Riverside Stadium this Summer.”
More On This Story: Ten Players Championship Clubs Should Sign On A Free This Summer
Damiano’s appointment a week ago caused controversy after fans questioned who he was. However, the players have backed their new manager and several have posted about how well training is going with the Portuguese.

bebero
7 years
Antolin Alcaraz, a player with great experience, and a beautiful presentation of the transfer, congratulations.
Good luck, and we and future transfers.
Login to Quote

Bamford Rejoins Boro For The Season

This new deal comes as a pleasant surprise to Middlesbrough fans, after Bamford had told media that he wouldn’t be joining the club this season, following the Karanka scandal a few weeks ago. 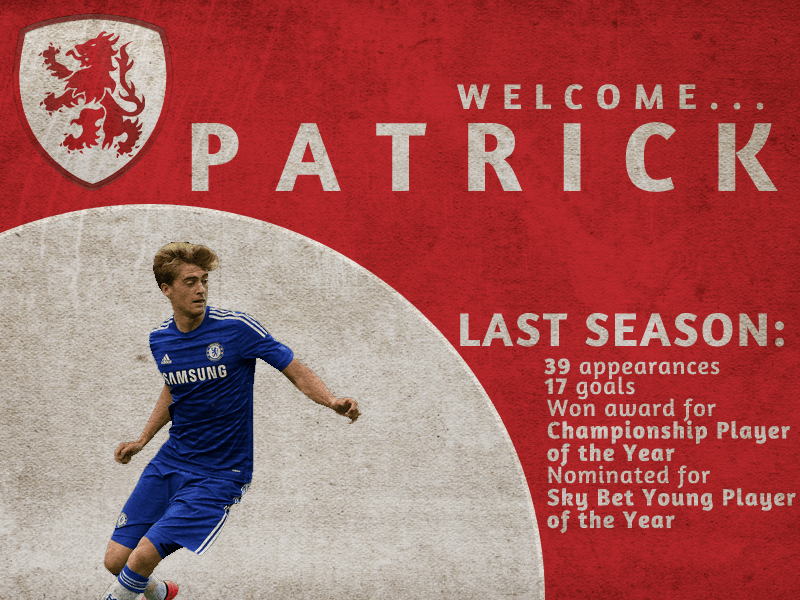 Most likely pleased with their new signing, Middlesbrough took to Twitter to announce the signing of last season’s hero, Patrick Bamford, with a fancy graphic.
Back in 2001, at the age of 8, Bamford signed with Nottingham Forest’s youth team, where he stayed for ten years. He made 2 appearances for Forest’s main team, before being moved off to top English side Chelsea.

So far, Bamford has made no appearances for Chelsea, as he has been loaned out to various clubs. In the 2012/13 campaign, MK Dons took the striker’s services, where he played 37 games and scored a very respectable 18 goals in League One.

Rumours had suggested that Bamford was going to head off to Premier League side Crystal Palace this season. However, this deal has been broken off due to some money disagreements. We’ll just blame John Carver for that one falling apart. It was probably his fault.
More: Carver Ruins Bamford’s Palace Talks
New Boro manager Santos Damiano spoke about his latest signing, who is the second to join The Riverside Stadium after experienced centre back Antolin Alcaraz, ”After a superb season for Middlesbrough last year, Bamford was at the top of my list of players I wanted to bring to Middlesbrough again. Of course, it’s unlikely that he’d leave Chelsea permanently at this stage, but a loan will do more than nicely. I am looking forward to seeing how Bamford does with another season of experience in our aims for promotion.”

Also to speak about the move was Bamford himself, who said, ”If I was going to go out on loan to anyone, it’d have to be Middlesbrough. I had the best season of my career at Middlesbrough, and I am delighted to get the opportunity to emulate that success again. The club are getting stronger and stronger each season, and I am looking forward to moving forward with it.”

Jose Mourinho: Chelsea Manager
”Patrick is an excellent player with excellent potential. He will certainly serve Middlesbrough just as well as he did last season, and when he returns, there may be a starting position for him at Chelsea if the opportunity arises. I want Patrick to get the best possible game time to fulfil his brilliant potential.”

Gareth Southgate: Middlesbrough Legend
”Bamford is going to be an excellent signing for Middlesbrough; I can feel it. I see him going on to great things in the future, but the present looks just as bright for this promising English striker. Middlesbrough are extremely lucky to have him for a second season.”

Middlesbrough kick off their first Championship campaign under Damiano with a game against Blackburn.

LOVE THE LAYOUT, UPDATE AND JUST ABOUT THE GFX (ALTHOUGH BAMFORDS A LITTLE SMALL AND NEEDS TO BE B&W)

HOPE THIS STAYS - AND THEN IT WILL CHALLENGE ME FOR SOTM

AlexTHFC
7 years
InfraRed: Thank you so much!

mo_123
7 years
Love the update, some nice graphics and I'm sure Bamford will be a good player for you.
Login to Quote