A Dive into Obscurity: Oceania Adventure

My manager starts unemployed, with Sunday League experience and no badges, not knowing where he will be starting.

The goal is to-

2) Win the top flight of every country in Oceania.
1
Login to Quote

abir_dc
7 years
So, here I am, Steve Martin, a former footballer who played in the lower food chains of English football, trying to forge a career as a football manager, without any kind of coaching badges.

Out of desperation, I went to Oceania, the bottom fodder of the football world, to start my career.

After applying for a few jobs, a newly promoted team of Kiribati, an island nation in the central Pacific Ocean, were the first one to approach me.

Betio Town Council, or BTC for short, is a Kiribatian club, based in Betio, the largest township of Kiribati's capital city, South Tarawa. Apart from that, I could not find a single thing about the club, apart from the fact that they won the League 2 times before. Guess what? Football manager has no idea too. 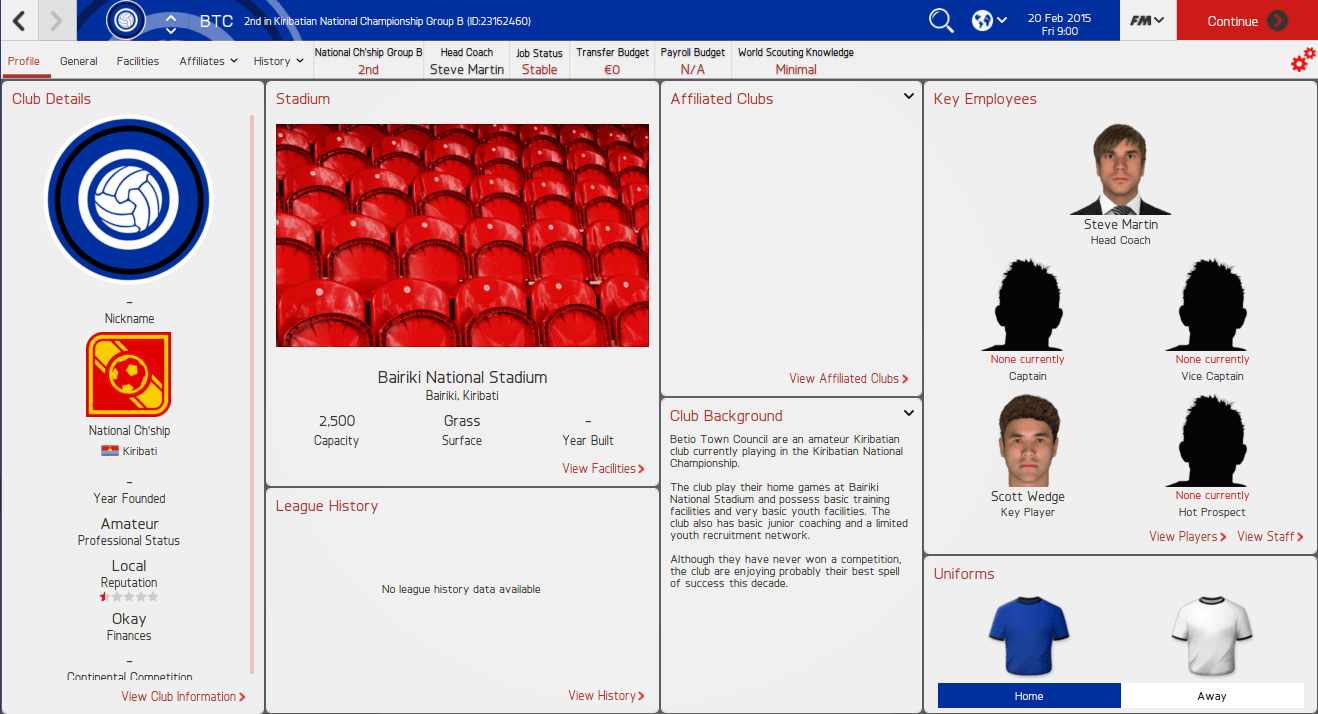 As usual, I completed the meeting with the President, and then waited for the meeting with the assistant manager. But to my surprise, the chairman just bade goodbye without even calling the assistant! I took a look at the staff list, and found out the President and I are the only staff of the club. Not all, a quick look at the squad left me flabbergasted, as I saw I only have 13 players in the whole club, with only 1 goalkeeper and no striker!

With 3 months left for the transfer market to open, I have to play more than half of the league matches with only 13 players!!

The facilities? Pathetic, as expected.

Funny thing is, despite being a Sunday league footballer, with low reputation, as soon as I became the manager of BTC, my reputation skyrocketed to National. I guess in this small island, a coaching badge less English Sunday League former footballer is a big deal.

abir_dc
7 years
Seems like It will be real tough. Despite the club only having a local reputation, the board wants me to qualify for the Championship Playoff. :mad:

The League rule is, 23 teams are divided into 5 groups (4 groups with 5 teams, & another group with 3 teams). Each team plays 2 matches with each of its group members. The champion of each group plays a championship playoff between them, while the 5 last placed teams play in the relegation playoff. The last placed team in relegation playoff gets relegated.
Login to Quote 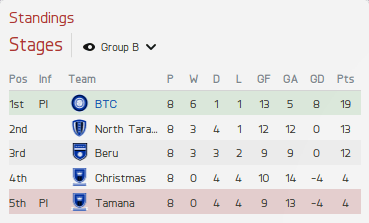 Okay, that was a pleasant surprise!

I was getting the vibe that I will be getting sacked pretty soon, but this turned out to be a pretty good season.

Four friendlies were scheduled before I became manager. But for some reason, all players had a 100% fitness, so I didn’t feel we need to play much friendlies. Plus, as we have a small squad, playing more matches mean I am going to expose my squad to more injuries. Also, as we are an amateur club, the tactics familiarity isn’t going to increase no matter how many matches I play.

So, we played only 2 friendly matches. And well, the result is 1 draw, and 1 loss. Disappointing, I just hoped the league matches will be better.

And thankfully my hope came true. How deceiving friendlies can be, the first match thought me. We thoroughly dominated the match, was 3-0 up within 35 minutes. If not for bad finishing, we could have given them a 5-0 thrashing. However, bad news, our CM and this match's MOTM Scott Burton is out for 6-8 weeks. :mad:

We drew the next tough away match. And continued our undefeated streak in the next 2 matches. The away win verses defending champion Christmas was totally surprising. Although, Scott Burton again fell into a nasty injury. North Tarawa got their revenge in their home, by beating us 2-1, giving me my first loss as a manager.

The transfer market opened, and we quickly got some business done to provide the squad with some much needed depth.

But, our performance dropped a bit,but still somehow managed to win the next 2 matches via two scrappy 1-0 wins.

The last away match against Beru was pretty much became the decider of who was going to participate in the Championship Playoff. We gained 16 points so far, while Beru were hot on our tails with 11 points, with 1 matches played less than us. Luckily, we were able to beat them in their home match to win the group, despite suffering 3 injuries throughout the match :lol:

On to the Championship Playoff!!!

I am pretty confused right now.

Why is BTC the winner instead of Betio? :confused:

After an almost 2 months wait, the Champions Playoff began. Compared to other teams, BTC's group stage matches finished quite early. So due to this huge break (and the fact that I can't play any friendly because the stadium is always busy!), the fitness level of the players were pretty low apart from my under 19 players.

Anyway, my hopes to become champion were dealt a great blow when Betio beat us in our first match, away from home. We came back with an away 2-0 win over Tabiteua South. But then in the 3rd match, we were again mediocre in our homematch, drawing against Abermama.

I was hoping that the first placed Betio will slip against Tabiteua South in their third match. They drew 1-1, keeping my hope alive for the championship. We were on 4 points after 3 matches, while league leader Betio earned 1 point more than us, with 1 match left.

We needed to beat Maiana in a large margin to become the champion. I pushed hard, playing more attacking than ever before. However, we could just beat them 2-1.

After the match got finished, to my surprise, I saw that BTC were first in the point table, despite losing against Betio and having a lower goal difference.

So if Betio loses the next match, will I become the champion?

And thanks to Maiana. They won against Betio in their last match, making us the CHAMPIONS!

I lost against Betio, have a lower goal difference, and same amount of goals scored. So why was I awarded the Championship?

Ah well, I don't wanna complain, I will take it. :cool: 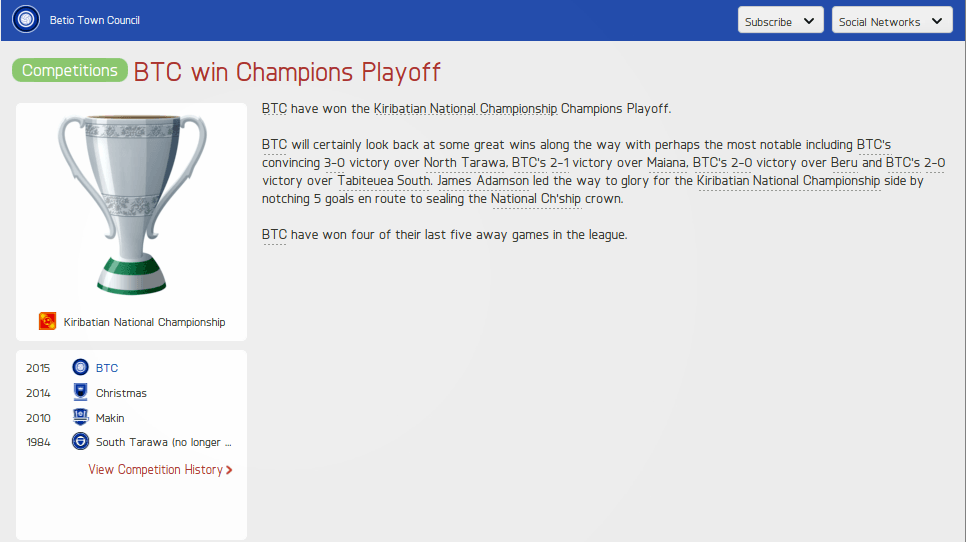 By the way, just found out that the Champion of Kiribati doesn't take part in the OFC Champions League! Time to leave this sandy pitch and find a new journey!
Login to Quote

I applied at the available jobs. 2 teams from American Samoa top flight, Vaiala Tongan & Utulei Youth approached me for interview. However, I was more interested to take jobs from Fiji, a middle tier Oceania team.

Their most successful team in history, Ba laughed off my interest, as expected.

But 2 days later, they approached me for an interview.

Vaiala Tongan & Utulei Youth both were interested for my service, but I prefer a job in Fiji, so told them to delay.

Got rejected from Lautoka, another team from Fiji.

Meanwhile, another job became available in Fiji, this time Nadi.

And, Vaiala Tongan decided that enough is enough after waiting for 3 weeks, and refused to delay any longer.

I took a gamble, deciding to reject their offer.

And fortunately, the gamble paid off.... 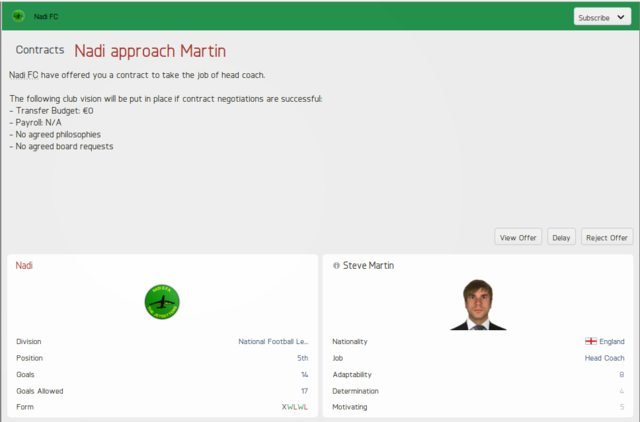 On to Fiji!!
Login to Quote

Thanks for enjoying it.

PranavaD
7 years
Which database are you using? Dank story btw
Login to Quote

C.J.Lippo
7 years
Great start mate, very interesting! I had a fun save in Vanuatu a few years back so this brings back fond memories.

You are reading "A Dive into Obscurity: Oceania Adventure".