Welshy
7 years
I love the length of your updates, very in-depth and thorough, good month too!

PranavaD
7 years
Did you get anybody from NYCFC? Awesome result btw. Could you explain the rules of the league in an update?
Login to Quote

Zed
7 years
PranavaD: No, I didn't manage to get anyone in on loan. I was close to signing someone, NYCFC gave me permission, but the player didn't want to join. As for the league, the league is divided into three tables, so to speak. The first one is an overall table, and is just there to give you a good view of how a team did over the course of a full season. Then there's the opening stage table, where you see the results of your team before the winter break. The best four teams from this stage are entered into a play-off, where every team plays one another two times. The winner of this play-off is given a ticket for the grand final. The closing stage is exactly the same, so again, the winner is given a ticket for the grand final (if the same team wins the opening and closing stage, the number two with the most points gets a ticket). And after all the games are played, you've got the grand final. I hope I've explained the system well. If you have any other questions, please ask

Tallery
7 years
That banner <3 Sorry I haven't commented on this yet, so good luck!
Login to Quote

TheSuperSub
7 years
Loving the GFX here, not a bad first few months in management with the bandits there!
Login to Quote 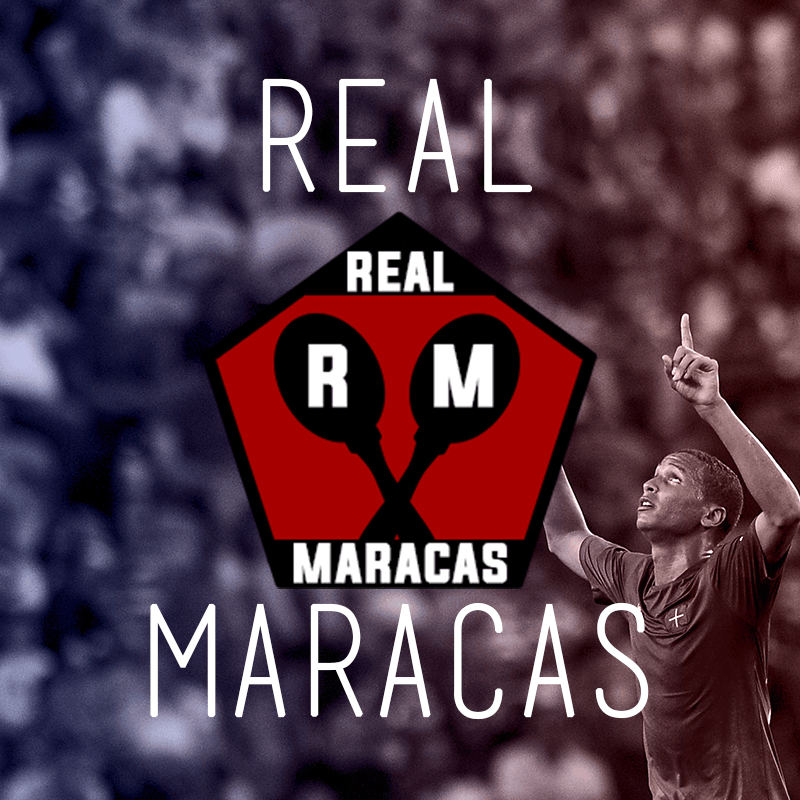 The club had no logo, so I decided to take matters into my own hand.

Seb Platter was sitting his office, preparing his line-up for the match against the Revolutionary Conquerors, when suddenly his office phone rang. Probably some salesman trying to sell me a cheap TV, he thought. He was irritated as this had happened three times today.

SP: *sighs* Hello, this is Seb Platter, who am I speaking to?

JT: Hello mister Platter, this is Junior Taylor. I’m the chairman of Real Maracas Football Club. You applied for our managerial vacancy a couple of months ago, am I right?

Platter immediately lost his irritation, and was very excited as to why the man had called him. Was to say that he had been invited to a job interview? Or had the job been given to another manager?

SP: Yes that’s correct. I think about three months ago I applied at Real Maracas. Your club actually laughed off my interest and said that the club wouldn’t even consider hiring me.

JT: Yes, about that, I’m very sorry. We thought we could find a much better alternative, but it turned out that nobody wanted to even consider our vacancy. You were actually the only applicant. That’s why I want to invite you to a job interview here at Real Maracas. Well, job interview, it’s more of a formal thing. You’re practically hired already.

SP: I’d love to work in such a good league! Let me break the news to my chairman and I’ll get back to you. Thank you so much for inviting me to a job interview!

The Englishman quickly stormed out his office and went to the office next door; the office of chairman Eugene Sosa.

SP: Eugene, I hate to break it to you, but I’m leaving this club.

SP: I’ve just been called by the chairman of Real Maracas, from Trinidad and Tobago. They want me to attend a job interview.

ES: That’s great news for you, obviously not for us, but managers move on, that’s how it works. I’m very happy with your performance here, you’ve done a good job here.

SP: I’m glad to hear that you’re not upset in any way. I’d like to thank you for the chance you’ve given me to start my managerial career here. I’m grateful. Well, I guess I’m off to the airport then. If all goes well, this is the last time we’ll see each other, so, all the best of luck here!

After saying farewell to his players, Seb Platter stepped on the plane to Trinidad and Tobago, and went to Maracas. Maracas was famous for its beautiful beach, and Platter already felt at home. The town itself wasn’t anything amazing. It only had about one thousand inhabitants. But it was near Trinidad and Tobago’s capital, Port of Spain. It was an ideal place to settle down, and try to bring success to Real Maracas.

Real Maracas are a club playing in the second Trinbagonian division. A division ranked 18th in North America, compared to the Belizean Premier League, in 54th, that’s a huge step forward. This league was much better, and some teams even had 10.000-seaters. They were never even half-full, but still. Another advantage was that this was the second division, so Platter and his new team could also promote. The first tier in Trinidad and Tobago was ranked 9th.

JT: Hello Seb, please, sit down. So, as I told you on the phone, you’re our only candidate, and you’re basically already hired. You can consider this your first meeting with me as the Real Maracas manager. Here’s your contract offer.

Junior passes Seb his contract. Seb nods in agreement, and signs the contract. He will be earning one hundred Euros per week, and a bonus when the team promotes to the first division. An sign of ambition to include that clause, Seb thought.

JT: Well, that was probably the shortest job interview ever! I want you to have freedom, and alter things as you go, but of course you’ll have to ask me for permission first when talking about bigger projects. If you don’t have any questions, I shall consider this first meeting closed.

SP: I’m very pleased with this opportunity you’re giving me, and I’m very pleased that you’ve chosen me, despite my lack of experience. I have one last question, request if you like, though. I don’t have any kind of manager’s license as of yet. In the summer break, after the three remaining games this season, I’d love to have a crack at getting my National C License.

JT: Yes, I think that’d definitely benefit your ability and stature on the training pitch. We will allow you to take part in this course, on our costs.

And there it was, Seb Platter’s first step in the right direction. He was absolutely delighted with the chance he got to manage this club, which had a much more professional set-up than his old club. He’d think about them regularly, though, as the club that he started his career at.

PranavaD
7 years
Shouldn't you have switched jobs after the title? Just to look good in your CV? Anyways, it is your decision, and good luck in T&T!
Login to Quote

Season One Episode Nine: The Last Three Matches in Season One 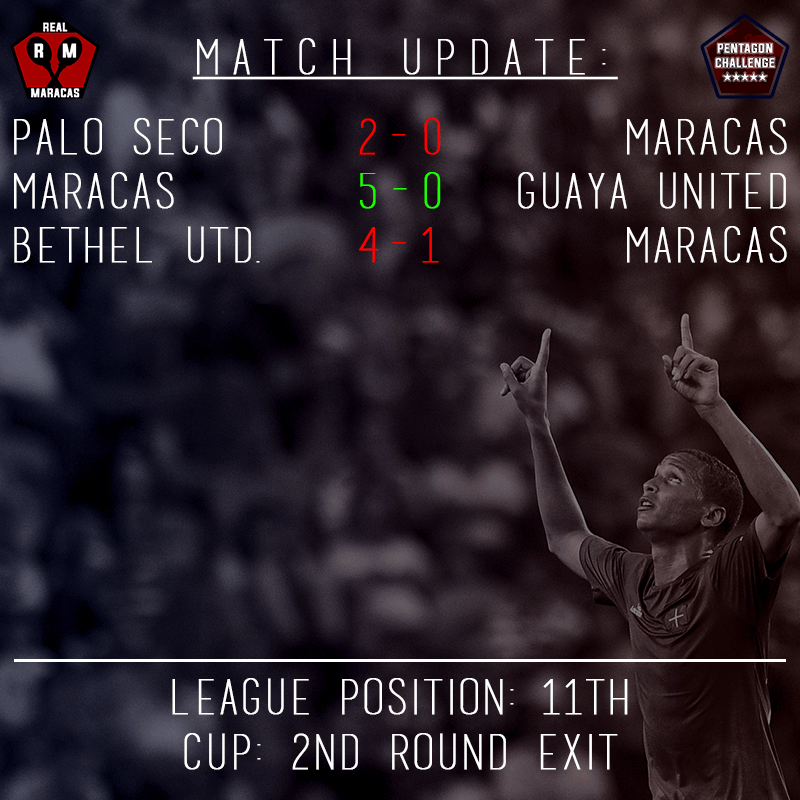 There were three more matches to play in Maracas’ season, but the team had nothing to play for. They couldn’t achieve promotion, nor could they get relegated anymore. The first match was an away game against Palo Seco, who were in 13th, two positions beneath Maracas. Platter didn’t really know what to expect, and wouldn’t mind a defeat here. He’d only trained three times with the team, and they didn’t really seem to understand his style of play. The match ended in a 2-0 defeat, but the manager saw some positives.

In the 27th game of the season, Real Maracas faced numbers five Guaya United in a home game. After the 2-0 defeat against Palo Seco, Platter was expecting another defeat. But quite the opposite happened, as Real won the match 5-0. Man of the match was Marvin Manswell, who scored a hat-trick. Despite winning 5-0, his team didn’t play well, and actually had less shots than the away game.

Closing the season, Platter’s new team played Bethel United. Bethel were in 11th, one place behind Real Maracas. After the last result, the English manager was hoping for another win. But no such thing happened, as Maracas were sent home with a heavy 4-1 defeat. This meant that Maracas finished the competition in 11th. A respectable position, and this was what the pundits expected before the season.

Platter had now seen his team play three times, and knew exactly in which areas he wanted to invest. He had already decided to play a 4-4-2 formation, but needed a good amount of new players to make his team challenge for promotion. To do so, he’d need a much bigger wage budget, as the team had about 200 Euros to spend on wages per week. Compared to some other teams in the league, their wage budget was tiny.

Enjoying the sun, and generally enjoying life, Platter decided to check how his old team Belmopan had done in the play-offs. He saw that his team didn’t win the closing stage, despite finishing first in the closing stage regular season, the team finished third in the play-offs. Juventus won the closing stage. In the grand finale, between the winners of both stages, Belmopan also lost. On penalties. So no more silverware after he had left the club. But now it was time to not worry about football, and enjoy the summer break. Platter was living a great life: living on a beautiful island and having a job he loves. Not many can say that.

shylax
7 years
I love exploring the world in FM, I just wish the mods worked better. I wonder if you can get some players exported to England, although I really doubt it. I can't really give an intelligent comment otherwise, sorry.
Login to Quote

SimichC
7 years
Looks good hope you can do better in next season as I bet you will.
Login to Quote

This deserves a permaban
Login to Quote