The Pentagon Challenge: One Man, One Aim 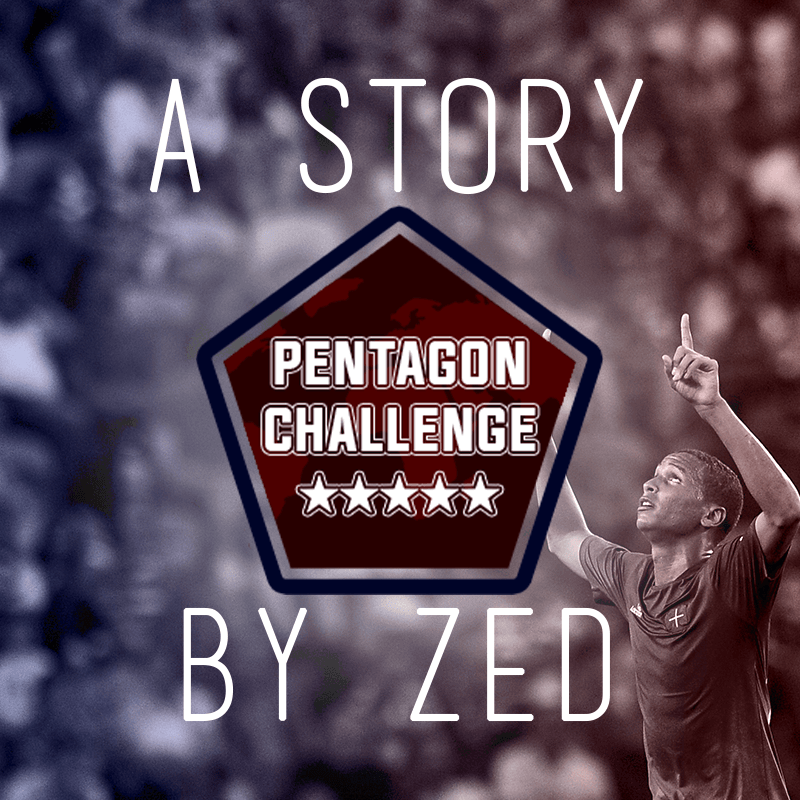 What is this story about?
Here I am, my first story against my really long sabbatical. Now though, I’m in the middle of my summer break, so I have lots of time on my hands to create awesome GFX (yay!) and write stories. This story will hopefully keep me going for a very long time, because this story will be my attempt at the Pentagon Challenge. What this means, is that I have to start with the lowest experience possible, and win all five major trophies (the European, African, Asian, North and South American Champions Leagues).

The idea for this story is that I won’t update every month, but have approximately five or six updates per season. A couple of these will be match updates, and others will be about transfers or about me changing to a different club. I will also try to include some interviews, newspaper articles and more of that stuff. Of course all the updates will include lots GFX (yay!).

Who am I?
I will be playing this story as Seb Platter, not to be confused with mob boss Sepp Blatter, who is a 22-year-old man from Ludlow. Despite never playing football, he has always had a passion for football, and is a big fan of Shrewsbury Town FC. The reason Platter has stepped into the managerial world, is because of something he yelled when his favorite team conceded a goal.

When watching Shrewsbury being humiliated, he exclaimed “I bet you I’d make a better manager than most of the fucking losers out there, especially that prick John Carver! You know what, I think I’d even be able to win the Champions League in every fucking continent!” Which seems to be a weird thing to exclaim after seeing your team concede a goal, but trust me, he did yell those exact words.

Three days later, Platter was on a plane to North America to try and secure a managerial role there. The reason he chose North America to start in, is because most leagues are really, really bad and he wouldn’t need a license to manage a club there. The first stage of this long and tiring journey would be to win the North American Champions League. The logical path to take here, would be to work his way up and win the trophy with a club from the USA or Mexico. That’d be the easiest way.

Is there anything else you should know about?
Yes, yes there is. To play this story, I’m using the FM Leagues Megapack, by Claassen. That’s the only mod I’m using. As always, I won’t be using FMEL or any other modifications that will make the game a lot easier for me. To start with, I’ve loaded up North America.

Icarus
7 years
Interesting idea to say the least, one that won't be easy to progress in having beaten it myself - all I can see is.... Good luck in Africa.

p.s. and a bit of patience wouldn't hurt.
Login to Quote

InvertedWingbacks
7 years
good luck man! takes a lot to commit to something like this!
Login to Quote

Season One Episode Two: The First Steps as a Manager After a long flight across the Atlantic, Seb Platter arrived in Mexico. He had chosen Mexico to land in, because it was in a central position and close to all the countries he was expecting to get a job in. Nicaragua, Haiti, Belize, Panama et cetera. Platter decided to start looking for vacancies in every country around him, submitting a total of three applications for jobs in Belize, Haiti and Jamaica.

He convinced the chairman that he was the right man to lead the Belmopan Bandits, seriously, who comes up with these names? Well anyways, it’s a good name for that man with the similar name to Platter. The chairman was convinced that our English friend could lead Belmopan to their fourth consecutive Belizean championship. Platter was offered a contract at one of Belize’s most successful clubs, but that doesn’t really mean anything. It’s not as if the league is one of the continent’s best. He accepted the offer it without even considering it, as it was the only offer he’d gotten.

By gaining reputation in Belize, Platter hoped to work his way up in North America, and eventually win the North American Championship with a team from the United States or Mexico. But that still seemed very far away, as now the Englishman would be managing a team he had never, ever heard of in his life. The Belmopan Bandits, what’s in a name! The first course of action for the new Belmopan boss was to pay close attention at every training session and evaluate every player.

After carefully assessing every player’s abilities, or rather assessing which inabilities the: the thing he decided to play in a 4-1-2-1-2 formation, giving him the following first team: 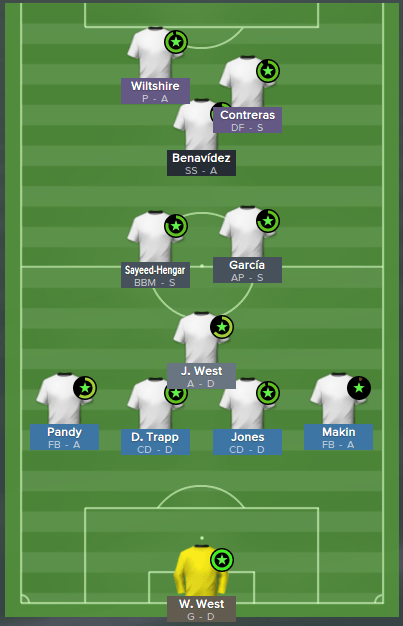 None of the names sounded familiar at first, but slowly he was developing a bond with the players, and he started to gain more knowledge about the small leagues in world football. His first match would be a friendly against Quirigua, a team playing in the Premier League of Nicaragua. Platter felt that his players were ready for this test against a much better team, but would have ideally wanted to add some more quality to his team. This, however, was impossible, as the club had no more money to spend. This meant that he had to play with a youth player at right-back.

One problem, besides not being able to spend on the transfer market, was the contract situation. Almost no of the star players wanted to extend their contracts, or they wanted to have their salaries tripled. Platter quickly started to see that he had to try and boost his reputation as much as possible in one season, and leave the club to join a better one in the summer of 2015.

Before confirming his line-up for his first match in charge of the Belmopan Bandits, the novice manager called his friends over in England. “Hey. Yeah, everything is well over here. How are you? Good, good. Listen, I’ve found a club over here, I’m managing Belmopan Bandits now. Yeah I didn’t know them either, they’re an awful team to be honest. I’ll keep you updated, we are playing in the CONCACAF Champions League, but I don’t think I can win it with this team! I’m about to play my first friendly match, wish me luck!” He hung up the phone and walked out of his office, ready to manage his first football game, without having played a match in his life himself.

Glenn T
7 years
Good luck, will be following in eager anticipation to see if you can pull this off

haha, good luck man! Team looks like a tough challenge but i've got faith in you!
Login to Quote