@Pauker - thanks! Means a lot! 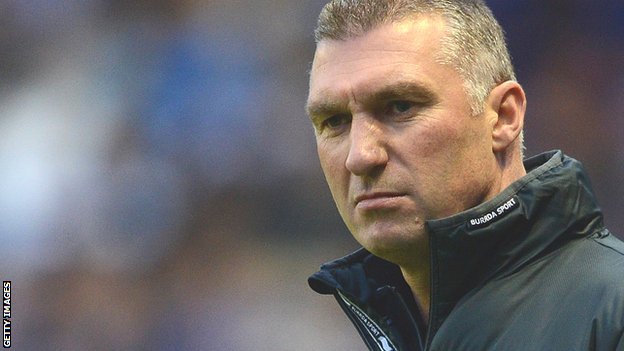 Nigel Pearson has come out this morning and told us that he won't stand in the way of anybody that wants to head for the Ewood Park exit.

Nigel Pearson has today stated that he would let anybody go if they wanted to, regardless of how good they are. He confirmed that the club has had a number of bids for some of their players and with rumours circling in the media about a number of his own players moving on, Pearson told the fans not to worry. 'I would rather have 11 players that will give us 100% commitment and 100% effort than some fancy dan who thinks that he is too good for this football club. Footballers come and go, that's the business we're in but the club will always remain! The name on the front of the shirt is more important than the name on the back. If one of our players wants to leave then I won't stop him, I want a squad that is committed to the club and committed to getting this club back into the premiership but if they're tempted by some other team in the league then they need to realise that the grass isn't always greener. If we do receive a bid for any player, I will sit down with them and ask for their honesty, if they want to move then that is fair enough, I don't want to stop them. But if they are going to stay then I want them fully committed to this club and it's bright future.

Pearson's words came at the end of a week in which 4 of his players were linked to moves elsewhere. Rudy Gestede was linked to a premiership move with Crystal Palace and Aston Villa being interested in the forward. Chris Taylor and Matt Kilgallon are targets for fellow championship club Ipswich and third choice goalkeeper Simon Eastwood has been linked with a move to newly promoted Bristol City. There has been no news on the future of other key players such as Jordan Rhodes and Ben Marshall, and when asked about the pair, Pearson replied, 'Nothing is happening with them at the moment so therefore I have nothing to say.'

Jordan Rhodes is 5/1 to still be at the club after transfer deadline day. I'm sure Rovers fans will be hoping they can keep onto the Scottish forward as they won't be able to replace him if they do so. Pearson doesn't seem to be too worried though, maybe he already has something up his sleeve, I'm sure we'll find out soon enough.
Login to Quote

Jer
7 years
Have you targeted replacements?
Login to Quote

RobertH14
7 years
@Jer - Due to the transfer embargo, I can't buy players permanently so I'm looking into the loan market and out of contract players. Unless I can raise enough money to lift the embargo which seems very unlikely.
Login to Quote

Huge shame that you'll have to sell and can only loan players!
Login to Quote

3 IN 3 OUT: THE BLACKBURN REVOLVING DOOR

Nigel Pearson has gone quick about his business after selling 3 of his Blackburn Rovers players and loaning in 3 young starlets! Goalkeeper Simon Eastwood, Defender Matt Kilgallon and Midfielder Chris Taylor have all departed the Lancashire club this morning all for rival championship teams.

Newly promoted Bristol City were the first to complete the signing of Simon Eastwood for a fee of £200,000. The 26 year old who joined Rovers back in the summer of 2013, was said to be disappointed about not getting enough playing time at Ewood park.

Matt Kilgallon joined fellow promotion chasers Ipswich Town for a fee of £675,000. Although a key player for Rovers last season, Pearson was quoted in saying that, 'Kilgallon felt that he wanted to challenging towards the top of the table, something he doesn't feel is possible with this current squad that we have, he was a high earner so to get him off the wage bill can only better our finances and to also get a decent fee for him was a bonus.'

Chris Taylor has also left the club after Brighton has an offer of over £1m accepted by Blackburn. Taylor, who hasn't featured in the first team that much for Rovers spoke about his move with the Brighton website. 'At Blackburn I felt like I was more of a fringe player, I've moved down here to play more football because that's what I want to be doing. I don't want to train all week and then not play on a Saturday, our career's are short and we have to make the most of them. I want to thank Blackburn for all they have done for me but now all my focus is on doing well for this club.' Rovers have also announced 3 players incoming, as Rovers raided Portugal for an intake of young loanees. A double swoop from FC Porto as Midfielder Ruben Neves and Forward Andre Silva sign on a one year loan deal. Also attacking midfielder Zakaria Labyad has signed on a one year loan deal from Portuguese giants Sporting Lisbon.

In other news, 10 youngsters have left Ewood park on loan till the end of the season in order to gain first team experience.

Jer
7 years
Great signings and what a way to sell imo are shite players! These 3 will be good for you, I can feel it

Welshy
7 years
Amazing business, shocked at how you could get all three players!
Login to Quote

Tallery
7 years
What a couple of signings - they're all good enough to be playing in the Portuguese Premier League, so to get them to come to you in the Championship is an amazing feat - well done

Lucas
7 years
I'm pretty sure I made that banner you're using like a year ago man, memories xD Good luck with the save and the story!

squirmy420
7 years
Quality updates on this story. Can't wait for the next one.
Login to Quote

You are reading "Blackburn Rovers - We will rebuild!".