Pochettino - We’re Not Finished Spending Yet

http://static.guim.co.uk/sys-images/Football/Clubs/Club_Home/2014/9/26/1411739661500/Mauricio-Pochettino-011.jpg
Focused: Pochettino has been analyzing what his squad needs this summer

Tottenham have already made a splash in the transfer market this season, adding 4 players to their squad, in the shape of Toby Alderweireld, Clinton N’Jie, Heung-Min Son and Kieran Trippier, while offloading multiple players, including Etienne Capoue, Aaron Lennon, Paulinho and Roberto Soldado.

Some Tottenham fans have expressed concern that their club have lost several midfielders, without any discernable replacement, while Emmanuel Adebayor currently stands as the only real companion for Harry Kane at the head of the Tottenham attack. One twitter user in particular was vocal about their concerns for the coming season, stating that ”Spurs need to make some signings, fast. A Striker and CDM would see us challenge hard“


http://www.chelsea-news.co/wp-content/uploads/2015/06/Moussa.jpg
Centre of Attention: Dembele is set to be one of Spurs’ key midfielders this season


As it stands, the real hope for Tottenham in the centre of the pitch is Mousa Dembele. The 24 year old Belgian has been asked to step into the void left by the likes of Capoue and Paulinho in the centre of the pitch, and he seems optimistic about that role: ”It’s massive pressure, of course, but I thrive on that kind of pressure - although there is a concern about the depth we have in the midfield just now, so some extra depth would be good, to cover for injuries and suchlike. Nabil [Bentaleb] is a great talent, as is Ryan [Mason], but even then, we do need some extra depth.”

And his manager, Mauricio Pochettino, shares his view, telling the media this morning that ”Our midfield and attack are certainly areas which i’m looking to address, especially after Roberto [Soldado] left, and Emmanuel is also looking for a move away from the club in order to get some more game time. I’ll be looking to bring in some more talent in both of those areas during this transfer window.”

Ladies, and Gentlemen! Welcome, to my latest adventure into Story-Writing on FM15! I appreciate FM16 is already out, and most people will be posting new stories on the appropriate forum for such efforts, but FM15 is where i feel comfortable, and therefore the game in which this story will take place.

The story starts at the beginning of the 2014/15 season, but with all transfers current as of 01/09/2015, courtesy of the FMWhizzkids database, and with some transfer budget remaining at my club of choice - Tottenham Hotspur - i’ll be playing as current Spurs manager Mauricio Pochettino, and trying to plug the gaps in the current squad.

Credit To AlexTHFC for the Banner

AlexTHFC
6 years
Good luck! You're gonna need it with a trainwreck like Spurs.

TayBAFC
6 years
Good luck, Tottenham are a good side to manage on FM, a lot of good talent within the squad!
Login to Quote 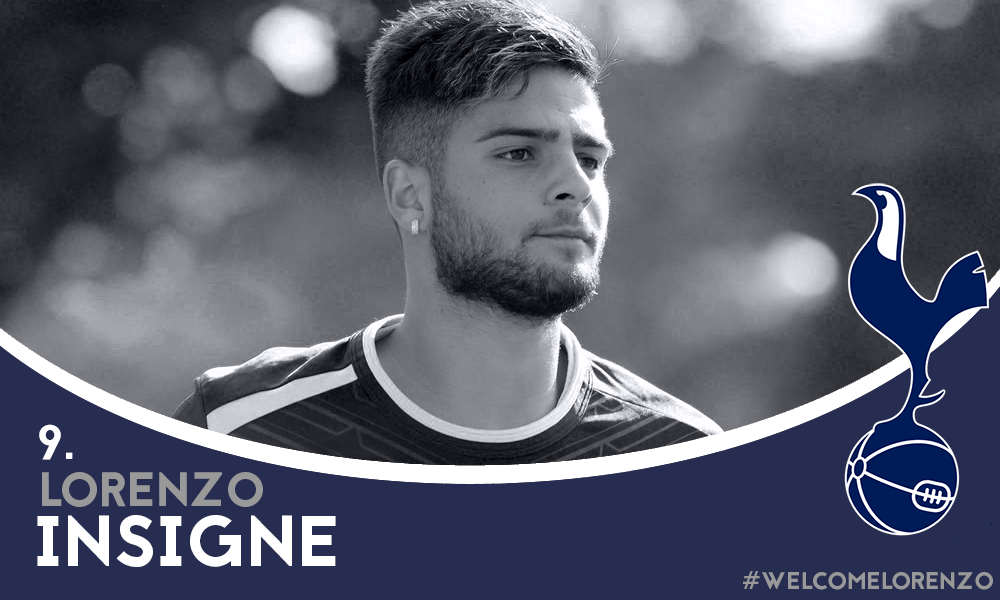 Rising Star: Insigne has enjoyed something of a meteoric rise at Napoli

Tottenham have today continued their summer spending spree, adding Italian winger Lorenzo Insigne to their squad, in a deal reportedly worth up to £10m, with an initial outlay thought to be around £5.5m.

The Winger started his career with Napoli, as a member of their Academy. In 2010 Insigne was sold to Lega Pro Prima Divisione club Foggia in a co-ownership deal with Napoli; during his time with Foggia, he scored 19 goals under the tenure of Czech coach Zden?k Zeman.
On 8 July 2011, Insigne agreed to re-join Zeman, accepting a one-year loan to the Czech coach’s new club Pescara. Insigne formed a notable offensive partnership with teammate Ciro Immobile, who was the Serie B top goalscorer with 28 goals as Pescara topped Serie B that season, scoring 27 more goals than any other team in the competition; Insigne managed 18 goals in the league himself as the club's second highest scorer, also providing 14 assists that season, heavily contributing to the team's success. Due to their victory in Serie B, Pescara were promoted to Serie A with Zeman's ultra-attacking style of football. At the 2012 AIC Gran Gala del Calcio, Insigne was named the "Best Player" of the previous Serie B season, along with his former Pescara team-mates Immobile, and Marco Verratti. Insigne's performances at Pescara enticed parent club Napoli to bring him back to his hometown club for the 2012–13 Serie A season. Insigne had originally made his Serie A debut with the club on 24 January 2010, under manager Roberto Donadoni, in a 2-0 win over Livorno;he scored his first Serie A goal with Napoli on 16 September 2012, in a 3-1 home win over Parma. He struggled to get a run of consecutive games at many points in the season but participated in a large successful season at Napoli, who finished in second place in Serie A that season. Throughout the duration of the season, he made 43 appearances and scored five goals, providing 7 assists. The competition for places with players like Edinson Cavani, Goran Pandev, Eduardo Vargas and Omar El Kaddouri meant that Insigne started often on the substitutes' bench.
The following season, Insigne made his UEFA Champions League debut in 2-1 home win over the previous season's finalists Borussia Dortmund, on 18 September 2013; Insigne marked his debut in the competition with a goal from a free-kick. In the final of the Coppa Italia on 3 May 2014, Insigne scored twice in the first half, as his side won 3—1 against Fiorentina.


http://static.goal.com/465300/465317_heroa.jpg
Prolific: Insigne developed a reputation as a great scorer in Italy

Insigne is a right footed winger, who is usually deployed on the left in a 4-3-3 or in a 4-2-3-1 formation; although his preferred role is on the left flank, he is capable of playing on either side of the pitch, or even through the centre, in a more creative role, as an attacking midfielder or supporting forward, due to his passing, vision, ball control, and dribbling ability, which allow him to create chances for team-mates and provide them with assists. A hardworking player, he is known for his creativity, agility, balance, vision, flair, speed, and technical ability. He is also capable of scoring goals himself and is an accurate set-piece taker. Due to these attributes, his former Napoli teammate and Macedonian captain Goran Pandev has referred to him as the "Italian Messi", in reference to the Barcelona star.

Starlord
6 years
Well done with Insigne, he'll do well for you and score tons of goals hopefully!
Login to Quote

TayBAFC
6 years
Everyone seems to be buying Insigne at the moment, anyway great signing!

Spurs Splash Out on Gimenez 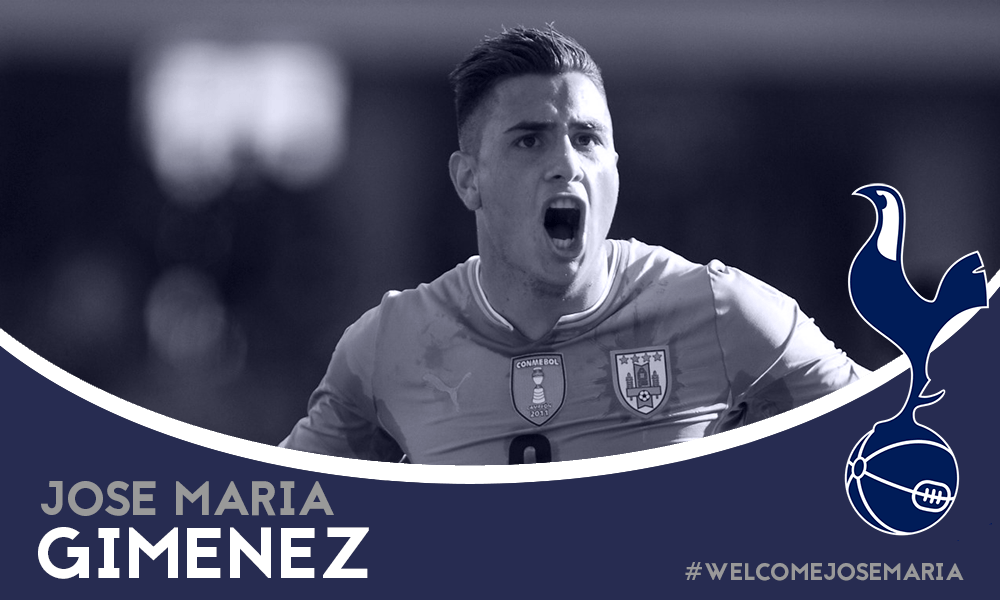 Staying For Now: Gimenez will spend this season on loan at his former club

Spurs boss Mauricio Pochettino is apparently coming good on his promise to focus on talents for the future, signing Jose Maria Gimenez from Atletico Madrid, for around £7.5m less than his release clause, in a deal thought to be worth around £20m, with an Initial outlay of around £8.5m, which will see Gimenez spend this season on loan at Atletico Madrid.

Born in Toledo, Giménez made his professional debut for Danubio F.C. in the Uruguayan Primera División on 17 November 2012 against River Plate in which he started and played the full 90 minutes as Danubio lost the match 2–0.

Giménez participated for Uruguay at the 2013 FIFA U-20 World Cup as the team finished as runner-up to France.
He debuted for the Uruguay senior team in a 2014 FIFA World Cup qualifier against Colombia on 10 September 2013.
On 2 June 2014, Giménez was named in Uruguay's squad for the 2014 World Cup finals. The 19-year-old defender made his tournament debut against England in the team's second group match, deputising for the injured captain Diego Lugano in a 2–1 victory for La Celeste. He went on to start in the final group match – a 1–0 win over Italy – and the 2–0 round of 16 loss to Colombia.

Gimenez, who moved to Spain less than a year ago, is said to be excited about the prospect of continuing his development in Spain as a Tottenham player, and fans will be hoping that his performances show him to be a player capable of holding back the premier league’s best.

TayBAFC
6 years
Great signing there, I probably would of kept him at the club but I trust your decision!
Login to Quote 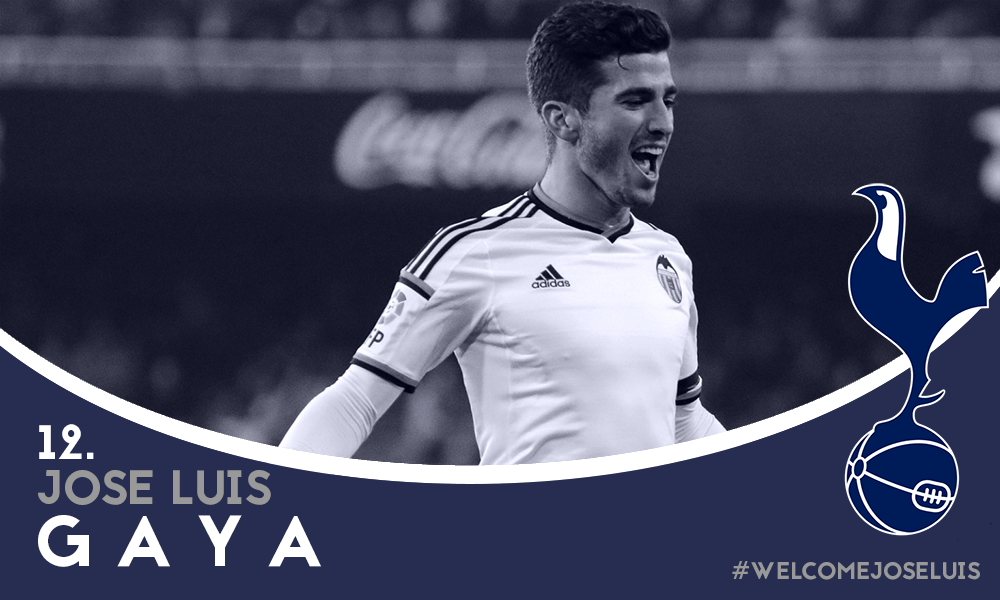 Centre Of Attention: Gaya was being chased by 10 clubs from across Europe


Tottenham’s Spending Spree continued today, as they activated the £13.5m Release Clause in Spanish starlet Jose Gaya’s Valencia contract, joining a race which spans 10 clubs, including Real Madrid, Juventus and Chelsea. Gaya though, chose Tottenham as his next destination, with Pochettino’s side going out of their way to make the teenager feel welcome, and loading his contract with bonuses related to the youngsters’ performance in the coming years.

Born in Pedreguer, Alicante, Gayà was a product of Valencia CF's youth system, where he started playing as a striker – scoring over 60 goals in one year – before switching to left back. He made his senior debuts with the reserves at not yet 17, playing 21 minutes in a 1–0 away win against Andorra CF for the Segunda División B championship. It would be his only appearance of the season.
On 30 October 2012 Gayà appeared in his first official game with the main squad, playing the full 90 minutes in a 2–0 win at UE Llagostera for the campaign's Copa del Rey. He made his first appearance in the UEFA Europa League on 12 December of the following year, in a 1–1 group stage home draw against FC Kuban Krasnodar.
Gayà played his first game in La Liga with the Che on 27 April 2014, starting and featuring the full 90 minutes in a 0–1 home loss against eventual champions Atlético Madrid. On 3 August he scored the first goal in a 3–1 win over S.L. Benfica, in that year's Emirates Cup.

Coveted: Gaya has drawn plaudits from all over Europe for his technically adept play


Gaya’s most notable asset is his ability on the ball. His previous as a striker, plus time on the wing, has made him more comfortable in possession. Gaya is highly adept at both running with the ball and receiving it, before making an intelligent decision. The 19-year-old can link up with the attack superbly, and shows the ability to not only offer width but also drift inside – as shown by his recent goal against Espanyol in the Copa del Rey. Gaya insists he can offer more goals once he has further settled in his role.

At first, he admitted, it was difficult getting used to defending. "I remember him [Castro] telling me I had to delay my runs forward, and think of the defenders first," said Gaya. "He said add to the attack, of course, but also repeated I had to close opponents down and cover the space in behind."

Note: Stats and Quotes from FourFourTwo and Wikipedia
Login to Quote

You are reading "Tottenham Hotspur: The Redemption".