daveazzopardi
6 years
Like the look of this a lot! Especially being a Wolves fan. Can't wait for season to get started Verdinho
6 years
3 wins out of 4 isn't too shabby! I wonder who you'll use up top, having signed Valencia and scoring with Benik Afobe and FM legend Adam Le Fondre in pre-seaosn. Then you have Dicko to come back from injury, too. Mad firepower!
Login to Quote 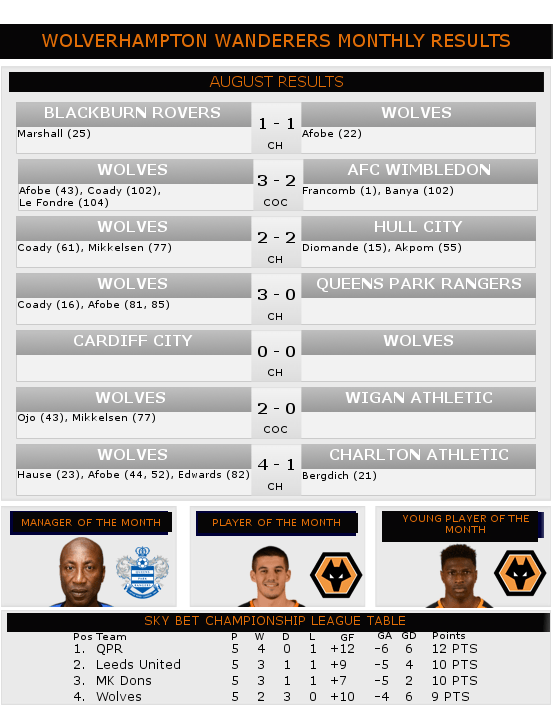 MJK46
6 years
Good start to the season and I like your graphics!
Login to Quote

Justice
6 years
Not a bad start, in a strong position now!
Login to Quote 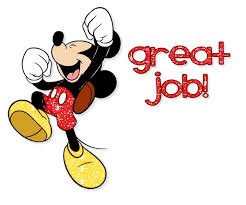 I need to buy a new PC monitor as my current one is broken, so while I wait for that to come, there probably won't be any updates. Hopefully it will only be a couple of days.
Login to Quote Championship side Wolverhampton Wanderers are the team in BT Sport's spotlight once again this week after two of their star players earned their first caps for their national teams.

Nigeria coach Sunday Oliseh persuaded young starlet Dominic Iorfa to follow in his father's - also Dominic Iorfa - footsteps despite being born in Southend-on-Sea and representing the country of his birth at various youth levels including a couple of appearances for Gareth Southgate's England U-21 team.

Oliseh was understandably delighted that such a promising talent has stuck close to his father's roots and turned down the obvious appeal of a squad like England's.

"Dominic has made the right choice. I'm sure his father had a word in his ear, so I guess I'll have to make that up to him at some point!

He's a young lad and a brilliant player for his age. He's twenty. He's got his whole career ahead of him and he's going to benefit heaps from having this international experience at this age."

Iorfa himself showed respect to the English system that trained him up but has agreed with Oliseh that this is the right thing to do for his career.

"I owe so much to England and the way I've been trained by all the coaches that I've worked with. I would have loved to play for England if the timing was right, but I'm honoured that Sunday offered me the chance to play for Nigeria.

I really want this to spur me on so I can really live up to the expectations that people have of me at Wolves as well as with Nigeria."

Iorfa started the game at right back and had a fairly solid debut against Chad in Nigeria's African Cup of Nations Qualifier before being subbed off just past the hour mark. 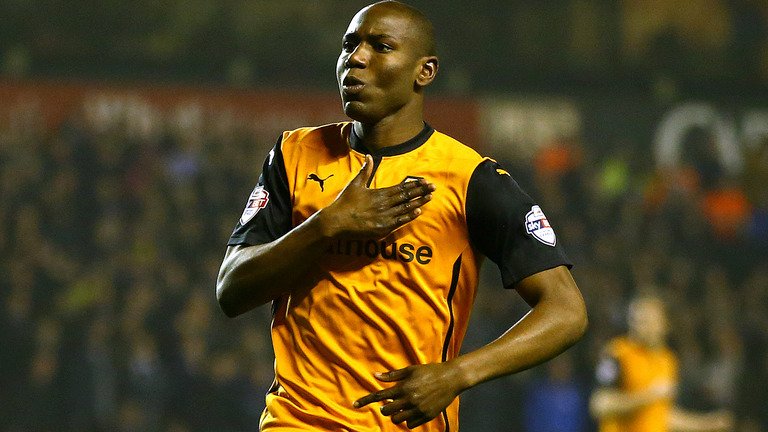 Also making his international debut this week was Wolves' star striker Benik Afobe. Like his club team-mate Iorfa, Afobe was born in London and represented England up to Under-21 level.

Making a total of thirty-eight appearances at various youth levels, Afobe had a prolific record, hitting the back of the net on 23 occasions.

But at the age of 22, the Leyton-born striker decided to accept an offer Florent Ibengé's offer to join up with DR Congo squad in their African Cup of Nations qualifying campaign.

Afobe will be delighted with his first performance at senior level for an international side as he made an instant impact, netting Congo's second goal in a 4-0 thrashing of Central African Republic before being replaced late on.

Wolves boss Kenny Jackett has had his say on the massive week for these two players and has praised them for their respective decisions to play for a 'weaker' side than England.

"I think it's brilliant news in terms of their development. Benik and Dominic are obviously two great talents that I'm sure Roy Hodgson will be kicking himself over missing out on.

These teams, they're obviously weaker than England. No disrespect is meant by that. Nigeria have a good history and Congo have got some good players in their squad too. These are two of the better African footballing nations at the moment in my opinion and it's really going to help both of our boys to be able to play for them.

I hope they'll continue to get selected but of course there is that fear that they could pick up injuries. I'm more than happy for them to go away with their country though because I'm so confident of the benefits international football will bring."
Login to Quote 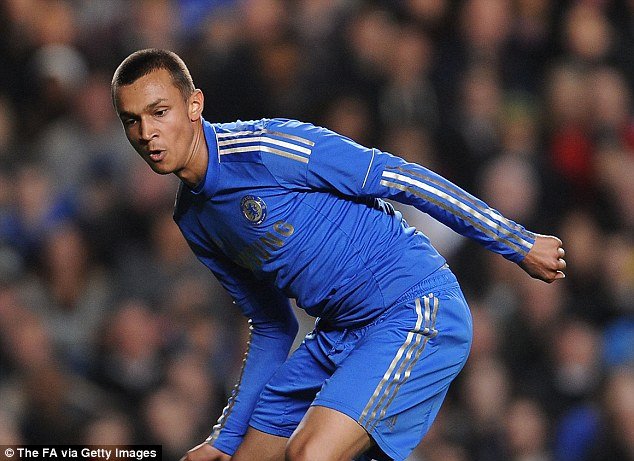 The 19-year-old joined Wolves last season after he was released from Chelsea following a disagreement.

The highly-rated youngster was thought to have been a target of giants Liverpool and Manchester City prior to his arrival at Molineux, but it seems that in his time at Wolves he has not gone off the radar, as Stoke and Sunderland lodged bids of just over £1 million on deadline day.

Wolves manager Kenny Jackett has told The Sun that he rejected the offers from the Premier League clubs because he sees a future for Hunte in his squad.

"I've got plans for Connor. He's going to be a top player with the right guidance and I think his development is best served here.

He may not be getting any first team action at the moment but I'd certainly expect him to feature at some point this season.

I'm excited about his future and that's why I've rejected the offers. But he's got ambition. And so have we. The lad has played at Chelsea, he knows what it's like to be around success.

He did come up to me just to ask why I didn't let him discuss terms and I've explained to him. He's happy. I told him about my ambitions for himself and my ambitions for the club and he's accepted that and he wants to be here."
Login to Quote 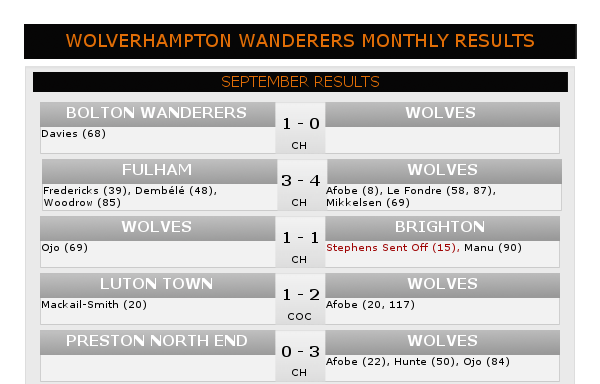 St. Martin
6 years
Looks good so far, mate. Your graphics are very nice, and I enjoy the realism of the news site updates. Well done.
Login to Quote

A goal within five minutes... not a bad way for Connor Hunte to make his professional debut 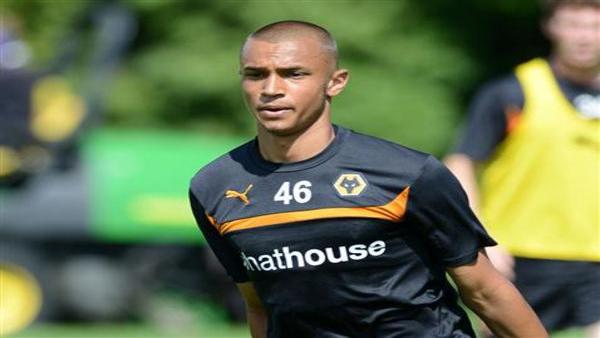 19-year-old winger Connor Hunte marked his professional debut with a goal as his Wolves side dissected a sloppy Preston North End team at Deepdale.

Just weeks after Wolves boss Kenny Jackett revealed bids from Premier League sides Stoke City and Sunderland for the teenage star had been rejected, the former Chelsea trainee was fast tracked into the Championship outfit's first team squad for their visit to Preston.

Congolese striker Benik Afobe put Wolves into the lead in the first half with his seventh league goal in nine appearances so far this season, but Preston were still largely in the game when the half time whistle sounded.

Kenny Jackett's decision to bring on Hunte and Liverpool loanee Sheyi Ojo paid off brilliantly as Hunte sealed the win within five minutes of the second half, brilliantly volleying young fullback Kortney Hause's cross into the top corner from close range before Ojo added the third late on.

This was Hunte's first competitive game at senior level in any competition, and his impact on the game was key to their victory over Simon Grayson's side.

The win leaves Wolves in third place with nine games played and Hunte was happy to have helped his team out with his goal.

"It's a great win for the team. Obviously I'm made up that I scored but the three points are far more important than my personal record.

I really wanted to repay Kenny's faith in me and I'm delighted that I got the second, but the team around me were fantastic.

Kenny's told me I'll be playing a few more games over the next few months. It's nice for me to be playing at all at this level. I've heard a loan move from a League Two side was turned down, so it seems like they've got plans for me. I'm excited."
Login to Quote

You are reading "Wolverhampton Wanderers - Revival".