taetae
4 years
I'm not going to write lots, I'm not going to write about transfers in and out, or finances. I'm just gonna post screencaps of some important parts of the first season and hopefully people like just looking at stats and results and overviews and little comments here and there instead of maybe a 10 minute reading session, which I find difficult to write.

I'll try and keep it short and sweet, this is my first ever post so feedback is appreciated and I'm only doing this because I was encouraged to in the General Chat after mentioning some parts of the season and problems I had/success.

I started off with Defending as my training and put ALL players on Composure training. With instructions to play slow and short passing. 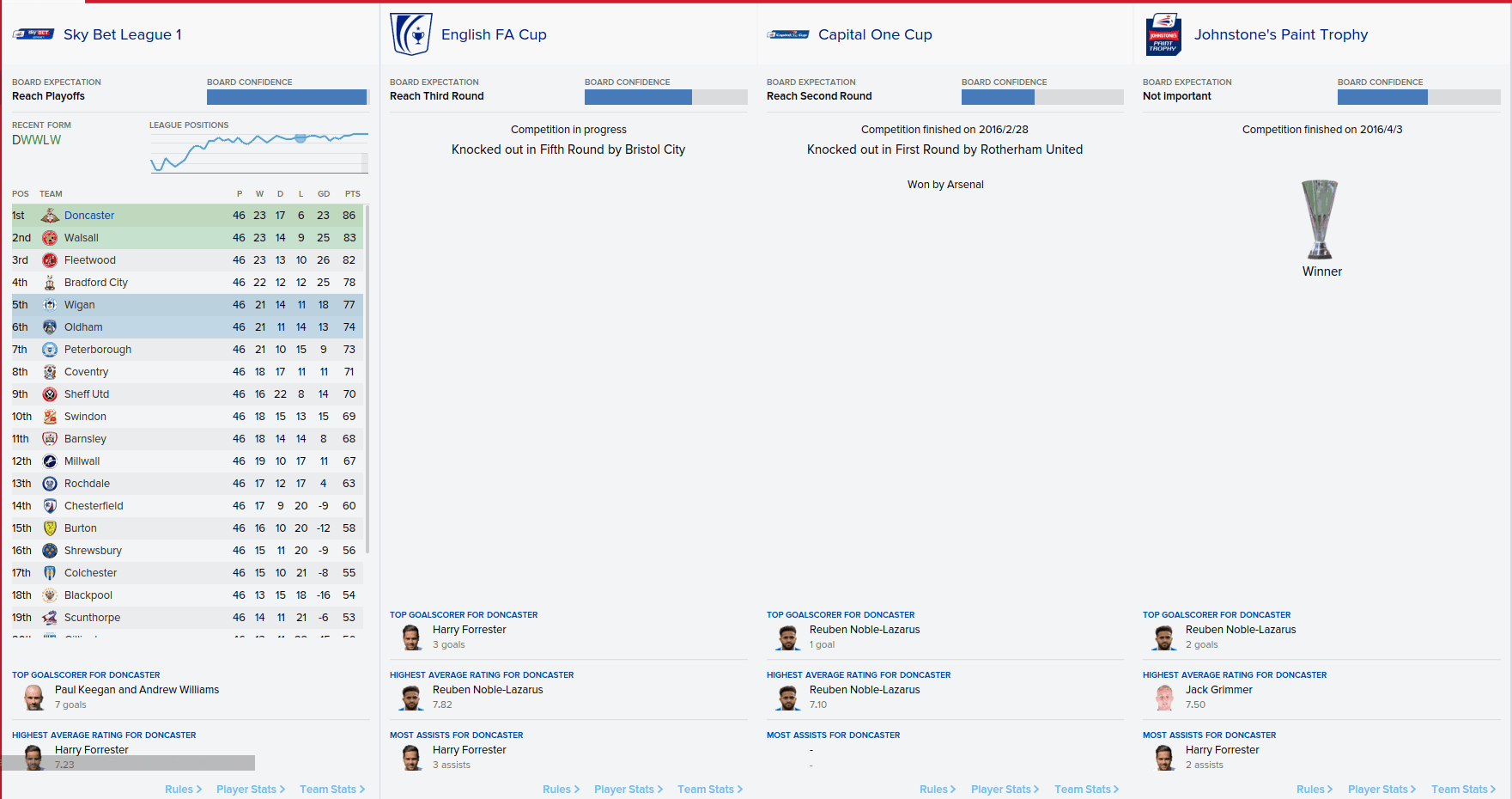 So you can see how the season went from this. Very poor start to the season but you can see where the team started to take in the composure training and defending training as well as pressing instructions and intensity. We managed a very good defensive record overall, which is great and key to any successful team. VERY poor attendances throughout the season. Maybe due to the 'boring' defensive football. But no. We weren't boring to watch. We were great and didn't look like a L1 side apart from the abysmal striking displays all season. We should've ran away with the league really. Donny don't have 5k a week either, so it's not very realistic at all. Bit annoyed as this would've improved our finances a lot. Simply amazing, cannot believe this statistic was acheived, so proud of the composure my team displayed when they didn't have the ball. If my calculations are correct, we need to improve the accuracy of our passing to improve our possession from 55% to higher. The ROCK in my team. Oh, this pebble, too.

P.S. United paid his whole wages. He earned a contract extension for them also and I will attempt to retain his services next year. He is a great shot stopper, but his 1 on 1s left much more to be desired and his positioning when leaving his line. My tactics suited him though as he never had too much distance between him and the limited cover defenders. But at times this did cause mistakes from both sides. Poor throughout the league really, but our keeper proves his shot shopping qualities with this stat as we had plenty on target which he HELD.

Similar Shots on target total to bury, who were relegated. But we finished first. I put this down to complete luck that we won as our strikers were just not up to the standard we needed, nor what their stats showed they should be capable of.

I hope you enjoyed this. We achieved Promotion by winning the title on the last day of the season after losing the game before. We won the Johnstones paint Trophy after penalties. We lost 6-3 to BRIGHTON after beating Stoke 2-0 away. Due to complete abysmal display by our captain at half time (5-0 all his positional mistakes). brought back to 5-3 and they scored in 90+1.

Hope you enjoyed this rushed short info-bite. Advice is appreciated.
Login to Quote

You are reading "'Donny' Doncaster Rovers".