Hello and welcome to my story of such I guess! This is my first time writing on the site, in fact it's my first time writing on Football Manager if I'm honest and I am have very good feelings ahead of this, I have been reading a few stories and what not to grasp the 'element' of writing and looked around at how to 'code' so hopefully I get this right. As you can see by the title I will be managing my hometown club and the team I support, AFC Fylde who play in the National League North and have played in this league for a year, this year will mark our second season after narrowly missing out to Barrow on the last day of the season, that was a very horrible day for me if I'm being honest! Anyway, I aim to take the Coasters up to the Premier League and eventually become a world beating side, that all shall fear. 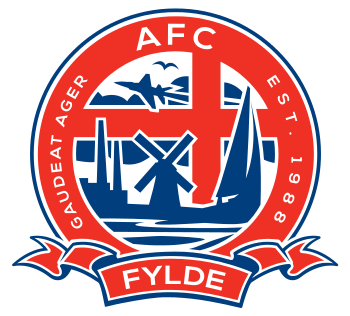 But why have I chosen Fylde? Well as I said, they are the club I support and I have done from a very young age, around eight or nine and I'm now 18 so ten years and I've seen it all, that's the life of a non-league club fan. But back to the point, I also picked them as they have a fantastic squad at their disposal and the temptation of building a team up from the bottom tier of the game to the very top again (I did this on FM13 with Boreham Wood) was far too much for me so I decided to start this as you can see. Fylde are also a very 'rich' side for this league and we are building a much bigger and nicer, from what I've seen stadium ready for the 2016/17 campaign and everyone is very excited as we look to be once again challenging to be promoted, currently we are top when I write this and alongside it, we are going on a little cup run after beating Barrow 1-0 in the 4th Qualifying Round (hooray

) we play League One Millwall and the whole town seems to be talking about it, anyway enough of the rambling onto the next thing!

Of course a lot of you won't know too much about AFC Fylde so I thought I'd write a short bit about the club. We were founded in 1988 and originally called Kirkham & Wesham and play at Kallamergh Park, the new stadium hasn't got a name yet (I believe) and we are currently playing at the highest we have ever played at after being stuck in the Northern Premier League for four years. We probably also have the most ambitious fans too, as seen in the picture I will attach above under this topic name, it'll be a big ask for us to get to the Premier League by 2022 (that's what they're saying.) The manager at the moment is Dave Challinor but whether or not he will remain manager throughout this story is a mystery

but anyway, history wise we have very little to our name due to the 'recent' founding of the club but we have the FA Vase, Northern Premier League title and more to our name. Hopefully this short piece gave you enough brief information needed.

So yeah! I hope this little introduction is the start of a great little thing to read and write for the both of us, me and you, the reader. I'm very nervous about this however I know this is something very fun and I'm extremely looking forward to it. I will aim to write as much as possible each time I update so there's always something interesting and I will be writing in a first person type of style by the way, so I won't be writing like this throughout the entirety of the piece don't worry. But finally I'd like to say thank you to all the people who have welcomed me onto the site as it's been amazing so thank you to them and Up The Coasters!
Login to Quote

CoreyE
5 years
Going to keep close tabs on this save, especially as a fellow NL fan.
Login to Quote

Hortensius
5 years
shall be following with great interest, i'm a preston fan myself but i was down in wesham last week and saw the new stadium. its shaping up really well, certainly looks like it will be the best on the fylde coast in a few years. + the retail park should give the club the revenue to soar up the leagues.

Fearless1885
5 years
Any updates on this? WIll be interesting to see!

I went to Millwall vs AFC Fylde the other night. Met your players and chairman. Good bunch of lads played really well considering the league gap.

AdamCarty96
5 years
Hello everyone, thanks for the support so far and yes, updates are coming. I am very sorry that I haven't been updating, but this is due to some issues I have had over the last couple of days and what not, but now everything is sorted and I am ready to go!

Jack
5 years
Looks like a challenging idea that you have my full support of - good luck!
Login to Quote

Here I was, at another Fylde game as the players walked out onto the surface of Kallemergh Park. I had been here for the last 20 years, I am now 28 and honestly, I loved every minute. No matter if we lost, won, drew, I enjoyed myself and so did all the others fans because we have a strong atmosphere and the players were like family to all of us, it made us unique. The club was like a community.

We have grown so much over the last few years and it's amazing to see because I have witnessed it. I have not missed a single game because our whole family were avid fans, who would not miss a game. Today was going to be a historic day almost, because it marked the start of the season, the 2015/16 pre-season campaign was underway and the fans knew in just a few weeks we'd be ready to start the promotion challenge and finally gain our way into the Conference. It was a new era, the Dave Challinor era.

The fans chanted all through the game as usual, even in friendly games, the fans would almost chant because football was in their blood. AFC Fylde was in their blood. As the game ended and we came away victors, all the fans piled out of the ground. People shouting across to each other, "Great game today, wasn't it Matt?" It was all part of the football experience.

As I travelled home, I received a text from my friend who was a steward at the ground. I pulled over so I could read the text, I looked down at the screen in shock as I read each word as the text said, "Adam... big news, Dave has had to resign because of something that's happened, nobody knows why but it's been confirmed that Dave has left." It was a huge shock, why had Dave just suddenly left the club and just ten minutes after a pre-season friendly win? It was all very strange and when I got home I logged onto my Twitter account to see a huge flood of tweets regarding the matter, everyone was shocked.

A day passed and still nobody knew about what had happened, it just didn't seem right. Who the hell was going to replace him and with just a few weeks before the start of the new season it was going to be extremely tough for the club to be able to concentrate and for the new manager to be able to get his style of play into the club and for him to get his transfers in. What was going to happen? Nobody knew...
Login to Quote

You are reading "Rise Of The Coasters: AFC Fylde".