Rumours have been circulating in the press over the weekend over a potential takeover of Manchester United, with reports that Russian billionaire Alexei Rebrov could be preparing table a bid to buy the club from the Glazers, Mr Rebrov already owns some shares in the club after their listing on the stock market last year, reports indicate that the takeover will not come easily though with the Glazers being reluctant to sell the club which they have owned since 2005.

Manchester United manager Louis van Gaal has admitted to MUTV that the current takeover rumours surrounding the club have left him with an "uneasy" feeling, reports that Russian oil magnate Alexei Rebrov is attempting to buy the club have seemingly unsettled the Dutchman given that Mr Rebrov is on record in Russian media having criticised his management of the club, Rebrov told a Russian newspaper in May this year; I am not sure about Van Gaal, this is a manager who has a certain approach to the game that I do not like, as a shareholder in the club this makes me a little disappointed because I want the club to play a certain way. Van Gaal did not indicate if he was considering his position at the club however his comments to MUTV will no doubt fuel speculation in the media.

Manchester United manager Louis van Gaal has shocked the club today by announcing his departure, the Dutchman who has been in charge at Old Trafford since July last year made the announcement to the clubs website earlier today;

It is with some regret that I must tender my resignation as manager of Manchester United, I have had a fantastic time at the club and with the players and the fans. I have though decided to step down from my role as manager of the club because of both wanting to spend more time with my family and the current takeover rumours surrounding the club, I wish the team and the players all the best for the future, but for me this is the right decision at this time.

the club was quick to respond to Van Gaal's departure and have indicated that a new manager is likely to be appointed very quickly to guide the club through pre-season although it is understood that the club are reluctant to appoint a permanent replacement to Van Gaal whilst speculation about a takeover continues.

Sky sources understand that David Beckham is in line for a "senior coaching role" at Old Trafford after he was spotted at the clubs training ground yesterday afternoon, it's understood that Beckham was approached by United for an unknown role at the club after Louis van Gaal's resignation 2 days ago.

Manchester United have confirmed this evening that former player David Beckham has taken up the role of manager on a provisional basis. United's chief executive Ed Woodward has said that Beckham's contract with the club is for an initial period of just 6 months whilst the club resolves it's current takeover talks. more on this story as it breaks...
Login to Quote

I am delighted to take up the role of Manchester United manager, as a fan of the club and having played for this team for many years I can't think of a better place to be. I know that this will be a huge challenge for me and I can't wait to get down to work, I am out to prove myself not only to the club, but to the fans as well. I know the club is undergoing takeover talks right now but I am hopeful that I can get off to a good start here so whoever is in charge will let me take the club forward into the future. I had no hesitation in accepting the clubs offer, I had been considering taking up a coaching role somewhere since earlier in the year and when Ed (Woodward) called to offer me this opportunity I jumped at it.

Beckham and the club have also confirmed that his first press conference as manager will take place tomorrow lunchtime.
Login to Quote

Griffo
7 years
Great idea here, best of luck with it!
Login to Quote

Jack
7 years
Good luck with this, mate. Got off to a good start already!

PikachuFC
7 years
thanks for the support guys

will be posting some more updates later!
Login to Quote

Manchester United have confirmed that Ryan Giggs has left his role as the clubs assistant manager, the club indicated that Giggs left the club by mutual consent and is likely to look for managerial work, it also means that new manager David Beckham will be looking to find a new assistant.
Login to Quote

David, you sit here as manager of Manchester United, how does it feel?

It feels fantastic to be honest, I've dreamt of this moment for years and to have this chance to take forward the club is an unbelievable opportunity.

Ryan Giggs has left the club this morning, how does this affect your backroom staff?

Obviously Ryan has been a legend for this club as a player, he's also a good friend to me as well, ultimately though we had a long chat yesterday night and he made it clear that he wants to look for a managerial role of his own and I also felt that being able to bring in my own assistant would help me. In terms of other roles, it's unlikely we will look to replace or let go of any other backroom staff right now, myself and the board are discussing bringing in a Director of Football and Head of Youth Development though to help me in my role, though obviously this may take some time depending on the takeover talks going on at the club.

Obviously one big question for the clubs fans will be transfers, can we expect any further activity from the club on that front?

Well the club has already made a number of signings and sold several players, as for further transfer business I will be focusing on senior players myself and letting other staff deal with youth players, I have a couple of positions in mind that I think we can still strengthen in, but obviously I will need to continue to discuss this with the board.

So can you tell us anymore about what players you have in mind or what kind of budget you have to work with?

I think for me the priority would be to bring in a Right sided attacking midfield player, we have guys who can play there like Juan (Mata) or Ashley (Young), but for both of them that's a makeshift role rather than their natural position so it's not ideal, with Juan I also am likely to need him in a more central role. As for Antonio (Valencia) it's likely he will leave, he's indicated to me he wants a greater first team role but I don't feel he is suited to the team I want to play with. I might also look at bringing in another defender or striker, but I need to review what options are out there.

What are you objectives for the season, assuming the board keep you on?

As you've alluded to there this is obviously a bit up in the air in terms of until the takeover talks are resolved. But I can tell you that until then and hopefully beyond then, my aim is very much to bring this club success, in the league my target is to improve upon last season where we came 4th so a top 3 finish would be a must for me there, in Europe I think our aim has to be to make it at least to the knockout stages if we can and as for the domestic cups I would love a good FA Cup run for the team as I know it's now been a long time since the club last won that tournament.

Can you tell us anymore about the takeover talks at the club?

No, not really, I know the board are in talks with people who are interested in buying the club, I know this may well affect things if they go forward, but for me really the aim has to be on working with the situation we have right now, if that changes then it changes, until then though I think it's best for the club to focus on doing the best it can right now.
Login to Quote

PikachuFC
7 years • Edited
Squad at the start of the game for anyone interested; 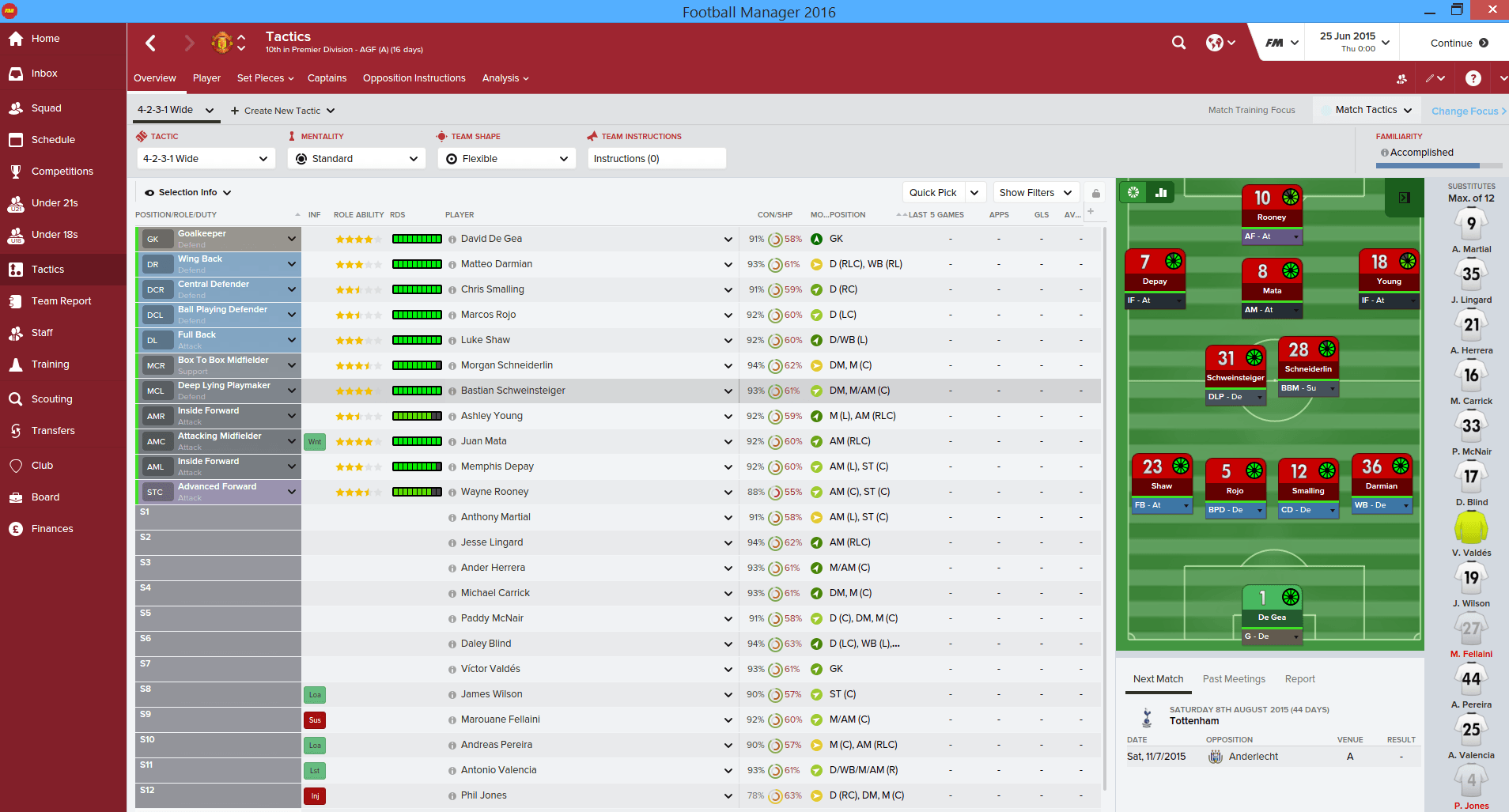 how do I make this bigger?
Login to Quote

In the wake of David Beckham's first press conference as Manchester United manager, club chief executive David Woodward confirmed to Sky Sports the details of United's pre-season; the club will begin with a training camp in England between the 27/06/2015 and 07/07/2015 before embarking on a pre-season tour of Argentina then rounding off with an away friendly and a home one a week before the season starts.

David Beckham told the Manchester United website shortly after; I'm very happy with the pre-season we have lined up, we have a lot of training lined up to prepare the team and some great friendly matches for fans to watch and also to help me decide on my best line up's and players for the season start.

Manchester United have signed Saido Mane from Southampton on a £30m deal.

United manager David Beckham gave this statement on the club's website; I'm delighted we have completed the signing of Saido Mane, Saido is a fantastic talent who proved himself in the Premiership last season with Southampton, his ability to excel on the Right Wing and perform as a Striker made him the ideal target for the team I want to build, I can't wait to see him in action for us.
Login to Quote

first up was Beckham's new right hand man, a familiar face to United fans in the shape of Mike Phelan who had already worked as assistant to Sir Alex Ferguson at the club in the past;

finally United confirmed something of a surprise signing in the shape of new Head of Youth Development; Liam Brady is best known of course for having held the same role at United's rivals Arsenal for 4 years between 2010 and 2014, though his tenure their saw a number of talented youngsters come through for the London club, no doubt Beckham & United hope he can deliver similar success at Old Trafford.

Manchester United have confirmed that Ecuadorian winger Antonio Valencia has joined Southampton in an £8.25m deal.

You are reading "The Beckham Babes.".