Manuel Pellegrini was today announced as the successor of Steve McClaren's Head Coach role at Newcastle United. McClaren, who resigned before the start of the season citing health issues, will return when he gets to full health as assistant manager.

Pellegrini was out of a job for only two days after he was released from his contract by Manchester City, who are chasing master tactician Pep Guardiola who has recently revealed his intent to leave Bayern Munich and manage in the Premier League.

The Chilean born manager, who lead Manchester City to one Premier League title and a League cup win in his two years in charge is said to relish the chance at staying in the Premier League and not having to uproot his family from Manchester; as he will fly in by helicopter each morning to take part in his teams training sessions.

After McClaren's transfer kitty is fairly diminished after purchases of Aleksandar Mitrovic, Florian Thauvin and Chancel Mbemba - Mike Ashley has told Pellegrini there is only enough for one or two new players, and any changes he wishes to make must be funded by the sale of players.

Pellegrini released this statement through his agent this morning: "It is with great honour that I can today announce, after two days, that I will be remaining in the Premier League. I will be managing Newcastle United who are a gigantic club with much history. Steve McClaren, the clubs previous head coach will be joining me as assistant manager as requested by the board. I have no qualms with this, however I will be bringing in some of my own back room staff. Thank you for your time."

Only time will tell how well the Chilean will do in Newcastle, but hopes are high from both staff and pundits.

SkySports pundit Paul Merson said "Pellegrini is a great manager, and could very well be the missing piece for Newcastle's push back to the top half of the Premier League. Let's hope he can improve on last seasons finish."
Login to Quote

FormIsntAll
5 years
Good start man, and good luck with the save.
Login to Quote


Tim Krul has today opted out of the Pellegrini era of Newcastle after completing a £10.5 million deal to Watford, which could later rise to £13 million.

The Dutch stopper who has made a name for himself up north, decided that he no longer wanted to be a part of the club after initial meetings with new manager Manuel Pellegrini. He immediately made contact with his agent who arranged a meeting with newly promoted Watford and the deal was made fairly quickly.

Pellegrini, although disgruntled at Krul's ignorance to his 'regime', is looking towards the brighter side of things. "I wish Tim all the luck in the world, however I believe the mistake he has made is very big. He decided very early on that we would not get along and wanted a change of scenery from a club that has changed drastically in his time here. I will not lie and say I am not disappointed, but this has given me much more room to manoeuvre inside the market."

In other news Manchester United launched a £10 million pound bid for Newcastle fullback Daryl Janmaat which was swiftly rejected. The club believe it was an attempt to unsettle the player, who would potentially thrive under United's manager.

Under-21's winger Rolando Aarons has moved on loan to Oldham, while young striker Ivan Toney and young defender Lubomir Satka have both been moved into the first team at the manager's request.
Login to Quote 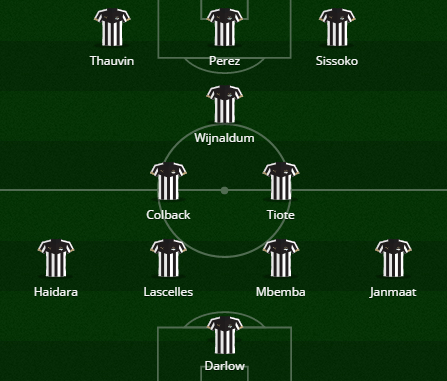 Manuel Pellegrini today silenced Claudio Ranieri on the opening day of the season with a game that was all but over after twenty minutes. Before the game Ranieri had questioned Pellegrini's mental stability after dropping from Manchester City to Newcastle United.

Pellegrini did not respond during his pre-game press conference. However, his players responded for him on the pitch. After just one minute, Moussa Sissoko latched onto the end of a Wijnaldum cross to head home the first goal of the 2015/16 season after just 51 seconds.

Thirteen minutes later, a cross from the same left hand side, this time from left-back Haidara swung in and met Sissoko at the far post, who volleyed it past Kasper Schmeichel who was left stood there in utter dismay.

Ayoze Pérez completed Newcastle's goal scoring rout on the 19th minute, as Haidara cut into the box from the left hand side, placing a perfectly timed pass across the box which was met by Perez, leaving Leicester three goals down.

Christian Fuchs managed to grab a consolatory goal on the 34th minute, but Newcastle held firm for the rest of the game with 57% possession.

Man of the match: Georginio Wijnaldum
Login to Quote

Jack
5 years
Good job with all the early goals! I like the way you lay out your match reports, keep it up

Man0war
5 years
Thank you all!
Login to Quote


Newcastle United today completed the signing of highly-rated young goalkeeper Bart?omiej Dr?gowski in a deal that could see his former club Jagiellonia Bia?ystok receiving £15 million. The deal is thought to be £5 million up front plus an extra ten when the player surpasses a certain amount of appearances for the club.

The keeper is thought to be a long term replacement for former stopper Tim Krul, who recently left Newcastle after deciding his time was done at the club.

The Polish stopper will earn £8000 a week in a three year contract that will see him at the club until he is twenty. Pellegrini hopes that the player will develop into a star and aid Newcastle in returning to the higher echelons of football.

Manuel Pellegrini, in a press conference said "I think he will be good enough. I think he can go straight into the fold, be our number one and help us get back to where we should be. Just seeing him play is delightful, and I get to train with him every day. I know many fans will be worried, but have faith."

Dragowski made a short, but succinct statement in Polish: "Bardzo si? ciesz?, ?e tu jestem. S?ysza?em wiele o tym klubie w Polsce. Mam nadziej?, ?e fani i mened?er szcz??liwa." (I am very glad that I'm here. I've heard a lot about this club in Poland. I hope to make the fans and the manager happy.)
Login to Quote

Griffo
5 years
Never heard of him, hope he does wonders for you!
Login to Quote


Manuel Pellegrini today completed the signing of veteran English defender Ashley Cole for a fee of around £235,000.

The left back, who has played for clubs like Arsenal, Chelsea and A.S Roma had voiced his discontent at being in Italy and that he wished to return to the United Kingdom. Clubs such as Bournemouth, Aston Villa and Norwich all expressed interest, but Cole decided that a club the size of Newcastle was too hard to refuse.

"What an establishment. What a club. I weighed up all my offers and just couldn't refuse Newcastle. It's a beautiful city full of beautiful people, and I can't wait to get back to playing the beautiful game in this beautiful country."

It is rumoured that Newcastle had previously told Pellegrini to sign only young players, however he decided that the club needed some back up on the left hand side, and that the 34 year old ex-England international was the perfect fit.
Login to Quote

Nick_H
5 years
Some good signings there and a great way to start the season. The writing is top-notch too!
Login to Quote 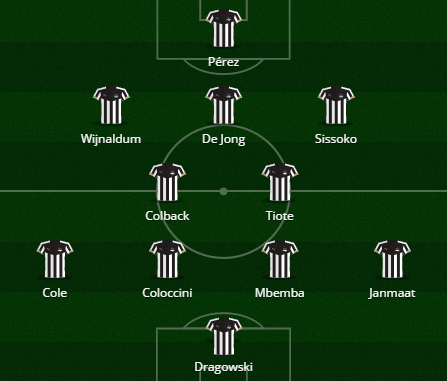 Siem de Jong saved the day today with a wonderful strike from outside the box. The Dutch striker made his first start of the season as Florian Thauvin was dropped the bench after a disappointing last game.

The first half of the game was even in possession, but Newcastle took control of attacking and left Southampton finishing the half with no attempts on goal. Just before the break new signing Ashley Cole came close with a left footed shot from 20-yards which clipped the post and went out for a goal kick.

In the second half Southampton began the better team with a number of shots on goal, but young keeper Dragowski kept his calm and made a number of impressive saves to keep Newcastle in the game.

In the 82nd minute Newcastle broke the deadlock as substitute Vernon Anita made a piercing run to the right side of the box, before turning in and placing a beautiful pass to Siem de Jong, who hit the ball first time, curling the ball around Southampton keeper Gazzaniga.

After the game, de Jong said this: "It is great to be back playing again in a Newcastle shirt. I am so excited to have scored my first goal."

You are reading "Crash Dump. Great.".