Thirty-eight years old and the Football League Manager of the Decade.

The man is looking to embark on the trip of a lifetime as he sets up his newly-promoted Bournemouth side to take part in the Premier League for the first time in the clubs history. Three years ago they were sitting in League One.

The man has done something, and whatever it is, it's working.

It is seven days until the start of the 2015/16 season, there are still transfers to be made. There are still tactics to be trained. But there is just one question on everyone's lips:

Just 'Howe' does he do it?
Login to Quote


Bournemouth forward Tokelo Rantie has today joined Swedish giants Malmo FF in a deal thought to be worth around £625,000. The striker, who has enjoyed two years playing for Bournemouth will return to his former club after making only twelve starts last season.

South African Rantie, 25, scored only five times in forty-two starts for the Cherries and boss Eddie Howe decided that it would be better to re-invest the money gained from his sale rather than pay his wages while he sits on the bench as the sides fourth-choice striker.

The Cherries are however making a considerable loss on the forward, after paying a rumoured £2.5 million for him in 2013. There are rumours that the striker was unsettled in Britain and wished to return to a place that he held dear in his heart.

The opening day of the season is only a week away, but sources close to the club are saying the team will have new members before the first game.
Login to Quote

Griffo
5 years
I was considering a Bournemouth save, this should be really interesting!
Login to Quote 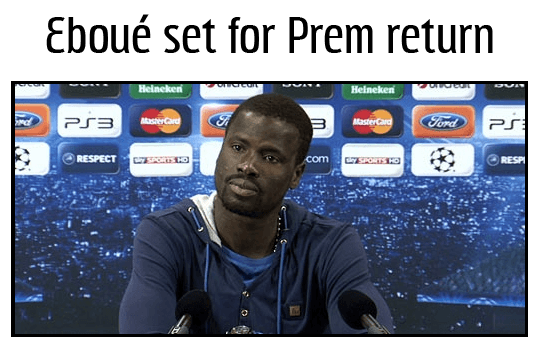 
Former Arsenal right-back Emmanuel Eboué is set to return to the Premier League in a shock move by Bournemouth.

The Ivorian, who was without a club, is set to be paid around £8,000 a week on a two year contract. While at Arsenal, Eboué made 132 appearances for the side before leaving to join Galtasaray in 2011, where he made 77 appearance for the Turkish outfit.

Bournemouth manager Eddie Howe has revealed that the thirty-two year old is nothing but back up.

"He's on the same level as anyone else we have that can play right-back. He'll provide valuable cover for the first team player, whoever that may be and I'm sure when called upon he will be more than capable of handling the expectation and delivering the goods. He's a seasoned player and we've done really well to lure him here."

This marks Bournemouth's first foray into the transfer window since the departure of Tokelo Rantie.
Login to Quote

FormIsntAll
5 years
Good signing there. Nice option to have.as a back up.
Login to Quote

Nick_H
5 years
Eboue? What a strange signing for sure, though experienced.
Login to Quote

And the work by Howe, wow, what a great rise.
Good luck for the story

Erdnaxela
5 years
Why Eboue when you have Francis and Smith ? I don't think Eboue will be better than them.

By the way, I am really happy to finally see someone start a game here with the Cherries. Don't forget to post your tactic(s), I'm curious to see how you play with them because I also started a game with them. 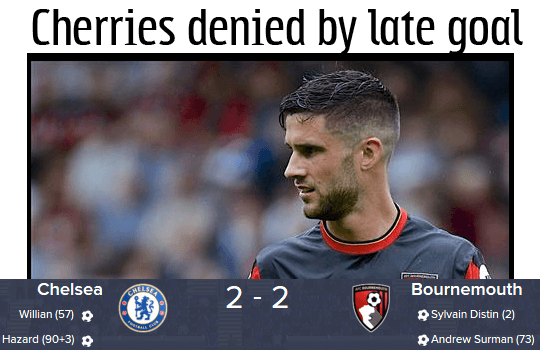 Their second game of the season didn't end as expected.

After a 4-1 defeat at home to Everton (sorry, I forgot to take screenshots for the graphics) in which the Cherries took an early lead after five minutes, Bournemouth took another early lead today at Chelsea, with Sylvain Distin slotting home after a messy scrap in the box.

The game was all Chelsea's, but Bournemouth held strong until the 53rd minute, when a long ball from Eden Hazard found Willian on the right-side of the box, and the Brazilian slotted home coolly past Artur Boruc. The Cherries managed to sponge much of the pressure from the league champions for another 20 or so minutes, which is when midfielder Andrew Surman gave the away side a surprising lead.

Surman found himself on the edge of the twenty-yard-box and managed to wiggle between Terry and Djilobodji before placing a cool shot in the bottom left corner. Bournemouth continued to sponge pressure and looked to be winning the game in perfect fashion until a scrappy 93rd minute goal from Eden Hazard dashed any hopes of three points.

Jack
5 years
As gutting as it is to lose out on 3 points to a goal that late, a point against Chelsea is always positive!
1
Login to Quote

Man0war
5 years
That is very true!
Login to Quote 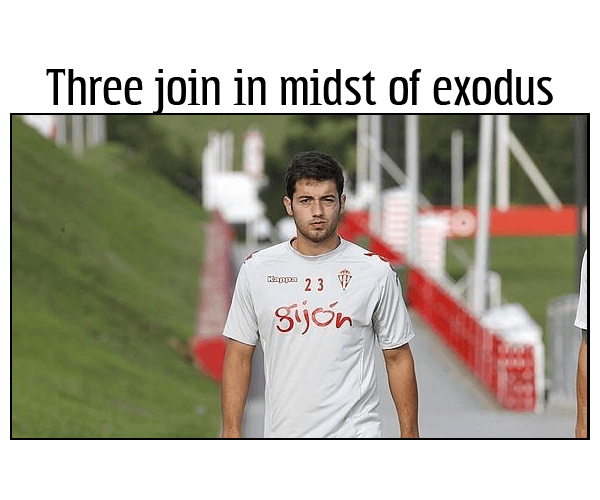 Jony is just one of the players to sign today.

AFC Bournemouth look to have completed their summer transfers as three players have joined, and three players have departed. Winger Marc Pugh was deemed to be not needed and joins Fulham in the Championship for a fee of £1 million. Elliot Ward joins Preston for £450k, and Yann Kermorgant, after complaining that he was feeling home sick, re-joins the French League for a measly sum of £160k.

Manager Eddie Howe however did not waste any time in bolstering his squad, with a host of foreign talent joining for fairly small fees considering their talent.

The first to arrive was Norweigan talent Valon Berisha from RB Salzburg for a fee of £2.8 million. The Norse international has thirteen senior caps for his country at the age of twenty-two. The youngster will earn £17,000 a week. The midfielder can also play anywhere across the pitch. "I am very grateful to have been offered this opportunity to come and play in the Premier League. Hopefully the club can help me grow and I can help the club grow in return."

The second, arriving a few hours later than Berisha was Romanian forward Florin Andone, who is also twenty-two years old. The striker joins for a fee of £3 million from Spanish outfit Cordoba and will earn £24,000 a week. He has one cap for Romania and will need to be sent on an intensive language course to learn English. "V? mul?umim pentru acest Bournemouth opportinity. Sper s? impresioneze toate fani." (Thank you Bournemouth for this opportunity. I hope to impress the fans.)

Finally, and arriving for the highest fee of £3.7 million, Spanish winger Jony (pictured) joins from newly promoted side Sporting Gijon in the LIGA BBVA. The twenty-four year old will earn £25,000 a week and will be played as a rotation player with Atsu as and when he returns to fitness. Jony also will need to be sent on an intensive language course to learn English. "He oído hablar mucho de este club. Pero más de la liga. Voy a luchar duro para ayudar a Bournemouth sobrevivir el descenso" (I've heard a lot about this club. But more the league. I will fight hard to help Bournemouth survive relegation.)

Whether Howe's new signings will impress is a question on everyone's lips, but time will tell.