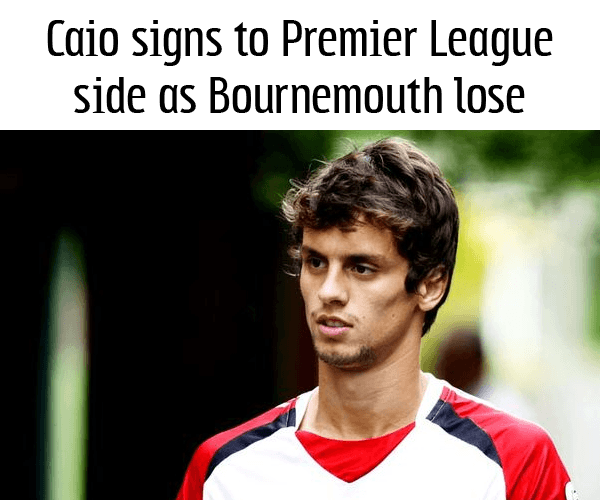 Bournemouth today crashed out of the second round of the capital one cup with a loss on penalties to League One outfit Walsall.

Bournemouth led the game 3-0 at one point, but an inspired hat-trick from Walsall forward Tom Bradshaw saw the game go to extra time. The game was still deadlocked at 3-3 after extra time so the game went to penalties, with Bournemouth players Jony and Murray missing allowing Walsall to progress after beating the Cherries 4-3 on pens.

In other news, Rodrigo Caio may be regretting his decision after the earlier game, as the Brazilian has signed for AFC Bournemouth. In a statement from him and his agent, he said: "I am incredibly grateful for this opportunity and I can't wait to get to England and meet my new team mates."

The transfer is set to cost the Cherries a mere £1.2 million and it is said that Sao Paolo will continue paying £3000 of Rodrigo Caio's £6,500 a week contract. This is great news for the club who have spent around £12 million this transfer window.
Login to Quote 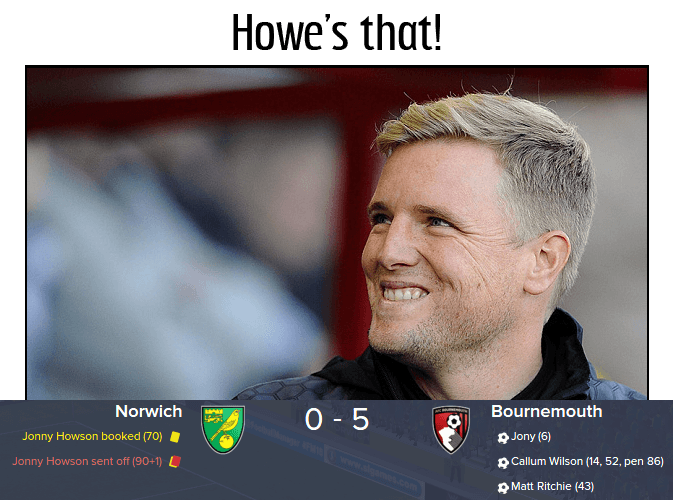 Bournemouth finished off August with an absolute outstanding victory against relegation-tipped Norwich that saw both the team's first clean sheet and their first win of the Premier League campaign.

New signing Jony gave the Cherries a lead after just six minutes, after squeezing through a gap in the defence and tapping home a Francis cross. Eddie Howe was delighted at the early goal and roared at the away fans, showing his appreciation.

Just eight minutes later, Callum Wilson got the first of his hat-trick, volleying home another cross from Francis, this time at the near post. The away fans roared Francis's name and he clapped to them as the side celebrated.

In the 42nd minute Bournemouth got their third as Callum Wilson roared forward, placing a pass to Valon Berisha in the centre of the field, who then slotted Matt Ritchie through who finished emphatically. This closed the first half with the Cherries being 3-0 up, after controlling much of the game.

Just seven minutes into the second half, Callum Wilson got his second after playing a beautiful one-two with Jony. Jony recieved the ball from Wilson who had begun to make a run, and lobbed the ball back to him so he could finish and give Bournemouth their fourth goal of the game.

Bournemouth continued to control the game and in the 86th minute substitute Florin Andone was brought down inside the box. Andone gracefully gave Wilson the penalty to complete his hat-trick, which he did.

Che
4 years
WOW! What a result and a turn around for that month
Login to Quote

Jack
4 years
Incredible win against Norwich, and a neat signing in Caio there. Looks to be all good at the moment for your lot!

Nick_H
4 years
Huge win at Norwich, was not expecting that at all! Congrats!
Login to Quote

No1VillaFan
4 years
Just read this story........ wow I like it. I love signings that are different
Login to Quote

killer win in a must win game against potential fellow stragglers.
Login to Quote

Davidxbo
4 years
I signed Andone for Hull and he's been flying. 2 hat-tricks in pre-season and scored in both of the opening two games of the season despite being deployed as a "defensive" forward.
Hope he does well for you at Bournemouth
Login to Quote

Griffo
4 years
I really like your individual update style!
Login to Quote 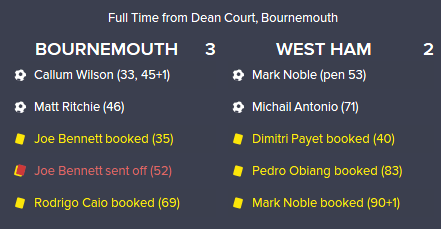 Player of the Month:
Matt Ritchie

Man0war
4 years
Sorry about the short update guys, I was playing and forgot to take screenshots for graphics so next update will be back to normal.
Login to Quote

Radders2109
4 years
Great result against Norwich mate! Some good results aswell in September, will be following from now on. Good luck
Login to Quote

Bournemouth today continued the trend of last month, by moving into this one with a win against a side that they weren't expected to even show up against.

Before this, the Cherries had not won in three games, losing to rivals Southampton, Manchester United and then drawing against fellow relegation contenders Aston Villa. Manager Eddie Howe, in his pre-game press conference announced he was "one hundred percent sure" that his side would at least get one point against Tottenham Hotspur.

The game was fairly quiet for the first ten minutes, until Bournemouth began to control the game and had a flurry of attempts on Tottenham's goal, with none being successful. In the twenty-third minute, emphatic striker Callum Wilson scored his seventh goal of the season in nine games as Valon Berisha nicked the ball from Alderweireld in the heart of the Spurs defence, playing the ball to Callum Wilson who was being played on side by Jan Vertonghen. Wilson managed to slot the ball past French keeper Hugo Lloris and give the Cherries the lead.

The first half then continued with an even amount of attempts on goal, but with Bournemouth holding the majority of possession. After the break, Tottenham produced a barrage of attempts against Bournemouth's goal, but Australian Adam Federici held strong and provided some show-stopping saves to keep Bournemouth ahead and secure them the three points.