First story I've done in 3 years first game so bare with me guys!


So I have had enough and got bored of selling dodgy ford escorts and has decided to plough my 150% legitimate money in reviving an old south Kent side Snowdown & Aylesham C.W.F.C who once squared up to the likes of Gillingham and Dover Athletic also won the Kent Senior Cup twice in the 1950's to see if my Midas touch can stretch to on the pitch as a manager to revive this once extinct club.

My mate Peruvian Paul recommended I plough my capital into football as a retirement investment and didn't realise what I have got himself into it's a bit like trying to shift some wooden ladders all over again at the Spinney Lane Ground.

First things first to make sure that I aient spunked £35,000 on another chocolate teapot and to secure the stability and survival of the club and maybe a run in the cup to help treat my darling 4th wife Ivana to some breast implants.

I said in a press conference "I don't know football for f***ing S**t! I bought myself football for dummies book made a nice cup of tea next thing you know I've gone bought a club that hasn't existed since 1997 and set myself as manager"

Speaking on the selection policy I took no prisoners "I aien't signing no lads who think their billy big b***ocks I'm only interested in local talent who are not only cheaper but actually care if this club lives or dies and plan to organize a trial day as soon as possible" bottom line is I will only sign players who are British and Irish Born with exception to one marquee signing saying "We need to pull the birds in and flog the shirts so we need a good looking Spaniard or whatever you want, as long as we can put Aylesham on the Map".

I will build this up as it goes along it's just a matter of finding some decent non-league talent to fit into the National South and will provide end of month reports for you.

Also remember tell your friends, wifes, mistresses and even ya bloody dog that Terry Tibbs is in Town.

Thank you goodnight much love
Login to Quote

No1VillaFan
4 years
good start i will follow
Login to Quote

naff123
4 years
Transfers In the Club
http://a4.mzstatic.com/eu/r30/Music3/v4/ab/f8/77/abf87733-27b4-f816-a50a-d9243f0dabfa/cover170x170.jpeg
Despite the low budget I've been doing what I do best and that is driving a hard bargain and I ended up bringing in one young lad who just moved to Canterbury from Frome lad called Giani or who I call the Italian Stallion after a successful trial day that involved several on field punch ups and about 6 goals between the boys but he stood out for me with a real hunger to succeed.


Results for August
http://i110.photobucket.com/albums/n107/pes-mad-lad/league%20form%20in%20august_zpsbhn36oul.png
So as you can see here our defence is a bit all over the place the most frustrating was the Bath game to put three past and still not win. definitely a area for improvement.

I'm not going to lie to you things are going peachy here at the moment I bought in a couple of good lads though shame one of them plays like he's there for the orange slices.

I soon binned that 4-2-3-1 which was about as defensively useful as Stevie wonder in Goal.
I have however managed to get the lads to put their bodies on the line and create some very hard spirited draws in the month in the run up to October. As soon as I got to chapter 4 of football for dummies I realized that 4-4-2 is still an decent bit of kit and got a suprise 2-0 win over billionaire Ebbsfleet as you can see below the lads are putting in a defensive and spirited shift but I lack the finishing touch. Adam Birchall who I signed when I flogged him a Saab at the start of the season is as reliable as that 200,000 mile motor an is yet to score a goal!
Birchall the Berke 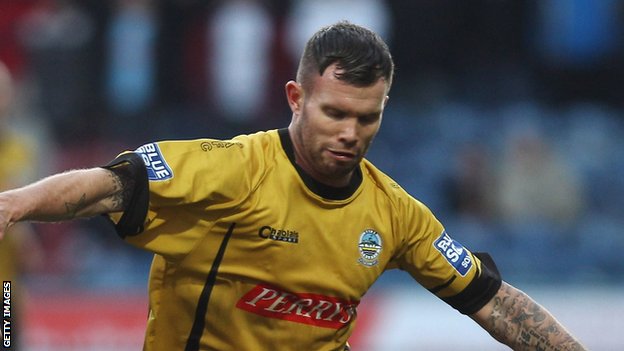 Not is all bad I said at the start i'll be signing local lads with passion and I got exactly that in Stephen Hamilton-Forbes young lad whose mother in Clapham I promised a couple of games has put in a shift every game and is pretty much on the starting XI first next to my new fresh piece of Columbian home grown goal keeper, Ex-Dover Jaimez-Ruiz who I heard was available through my good mate Reggie who has a business in Columbia. Who has worked his socks off.

On the Upside currently 7th when was predicted 13th so aien't all bad, if any of you fine players can reccomend a good cheap striker for the National South give Terry a buzz and I will reward you kindly with a full fat Ikea Leather Sofa.