mgriffin2012
6 years
Really nice post man, your writing style is fantastic! And hopfully you can keep closing the gap on Celta and then you'll get some more transfer money through your league finish! Best of luck mate!
Login to Quote

The board haven't made contact since our meeting yesterday morning and, as things stand, I'm not in a position where I have to make the first move.

I've driven into the clubs training ground, based in Mareo, earlier than usual today. The facilities are of a good standard for a club this size. Luis Enrique, the current Barcelona boss, and David Villa both played their youth football here.

I want to make sure everything we have scheduled for the day runs as planned. News will begin to filter through to the squad of yesterdays meeting, I assume, so I need to ensure it doesn't cause concern and become a distraction. The small main building is a little quieter than usual, so I grab a coffee from the canteen and take a seat in my office to run through the days plans a final time.

"I'm in the office - join me when you're in." I said. It was Paul Clement, my assistant.

"You're in the office? Haven't you read Marca this morning?" He replied, sounding panicked, "Information on a meeting you allegedly attended has been leaked. Names haven't been mentioned yet, but they claim you're on the verge of jumping before you're pushed. What the hell happened in there?"

"Hang on, I'll have a look." I opened a browser on my laptop and mashed Marca into the search bar.

We both paused as I read the contents of the article.

"It's damning news." I couldn't believe what I was reading, "There was only 5 of us in the room."

I explained to Paul everything that had been discussed. And how the meeting ended.

"The report sounds fairly accurate," he replied, "who do you think this was?"

"I don't know, but I need to speak to them. I'll contact you soon."

I ended the call and dialled Veiga's personal number immediately.
Login to Quote

2016-03-27 20:57#227934 mgriffin2012 : Really nice post man, your writing style is fantastic! And hopfully you can keep closing the gap on Celta and then you'll get some more transfer money through your league finish! Best of luck mate!

Writing a dialogue is always something I find challenging, so hopefully I haven't butchered those conversations.

mgriffin2012
6 years
Nah man you've not butchered it! You're creativity is great i dont know how you do it

Veiga didn't respond to any of my calls. It was a similar story with Javier Fernández and the other directors. It appeared all communications had been severed aside from a message passed to me by Veiga's PA. An emergency meeting had been scheduled to take place immediately after we host Atlético Madrid tonight. Myself and Paul were both asked to attend, but I didn't know who was going to show their face at the other end of the table.

I had agreed with the head of public relations that all media contact, aside from the pre-match press conference, would stop immediately. And even that press conference only survived as it was a requirement set to us by the league.

The crowd of press that gathered was larger than usual - probably double the size. They were warned to stick to questions about tonights game but of course that didn't deter them. I spoke briefly about the squad and our preparation, before cutting the conference short and joining the squad in the changing rooms.

On the pitch, I decided not to change anything. The performance against Malaga was the best I had seen since I was appointed and training over the past week had been positive. I just hoped the media storm that surrounded us tonight wasn't a distraction for the players. 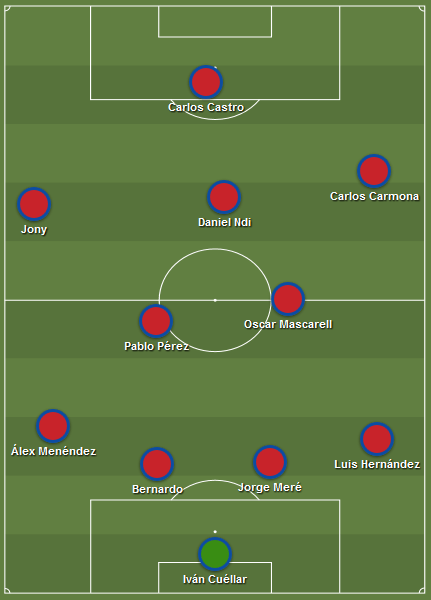 I shook Simeone's hand and took a seat as the referee sounded for kick-off.

I had barely gotten comfortable when we made an already difficult task that little bit harder. Gabi picked the ball up in midfield and played it forward to Vietto who was situated on the edge of the area with his back to goal. Augusto, playing on the right of Atlético's midfield, made a run inside of Menéndez and took the ball away from Vietto before firing a shot across goal. Cuéllar appeared calm as the shot looked to be heading wide for a goal kick before Meré, who seemed to be unaware of his surroundings, stuck out a leg and deflected the ball into the back of the net. As the away side celebrated with their travelling fans, I looked up at the clock - just 1 minute 47 seconds had been played.

Conceding such a sloppy goal seemed to knock our confidence as we struggled to keep possession for sustained periods. A couple of minutes later, Gabi emerged from midfield to a roar from the away fans. They looked to make the same move again - this time allowing Koke through on goal. Menéndez tracked his man better on this occasion and managed to get a last ditch tackle in and knock the ball behind for a corner.

As the first half wore on, we started to play with more composure in midfield which allowed us to get into better attacking positions. Just minutes before half-time, a trio of Mascarell, Ndi and Castro played through the stern Atlético midfield which afforded Carmona space on the wing. The Spaniard received the ball and drove at former Chelsea full back Filipe Luis; swinging a cross toward the far post where Jony was able to volley goalward and draw us level.

El Molinón erupted as the referee blew for half-time. Castro had been quiet up front and thus I decided to withdraw him from play and give Sanabria another opportunity. Menéndez had picked up a slight knock and was therefore replaced my López as a precautionery measure.

The second half was a poor showing from both sides. Atlético lacked their attacking quality from the first half as Simeone had instead opted for defensive stability, perhaps deciding a draw wasn't a bad result. We, on the other hand, seemed to drop deeper as the half wore on. My appeals to play higher up the pitch appeared to fall on deaf ears.

Both sets of players were comfortable to play in front of each other and around 40 yards from the opposition goal. Vietto almost created a chance for himself, managing to pick the ball up and drive between three of our men before hitting his shot high over the bar.

And, admittedly, my focus switched to the emergency meeting I was soon to attend long before the referee called time on a dull second half.

I shook Simeone's hand again and wished the Argentine a safe journey home, but my evening was far from over.

MJK46
6 years
A draw against Atlético is really good and hopefully the board sees that. Hopefully they are not to harsh on you and let you manage!
Login to Quote

Andy10Cook
6 years
Great result, the board can't get rid of a manager who's picked up a solid point to Atletico surely?

InvertedWingbacks
6 years
amazingly written story, this! and a solid result against Atletico, hopefully the board see that!
Login to Quote

You are reading "Rescuing the Rojiblancos".