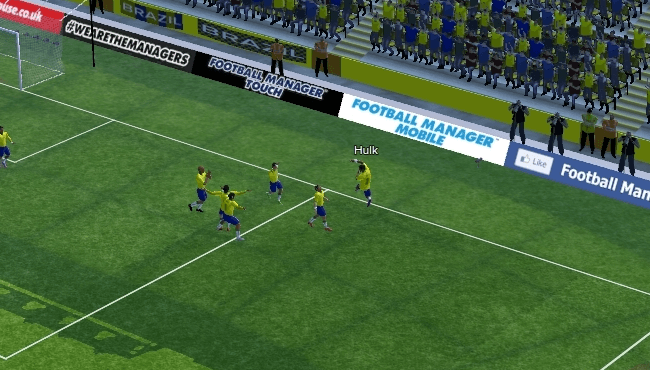 With Brazil reaching the semi final of the Copa América, Sky Sports Brazil reporter Miguel Rigdinho spoke with wing-back Hulk in a Sky Sports exclusive interview. The twenty-four year old wing-back has been in great form throughout the competition, scoring his first Brazil goal against Bolivia and claiming the Man Of The Match award in each of Brazil's last three fixtures.

Congratulations on scoring your first Brazil goal in the last game. How happy are you with the goal?

Hulk: "It was a fantastic moment for me personally, and the occasion made it that bit better. That goal was very important for me to score and it has given me yet another moment in my career to cherish. Playing in the position I do, goal-scoring opportunites do not come around all too often so to be able to score in the quarter final of the Copa América is a fantastic achievement."

After progressing to the semi finals, how do you rate your team's chances of winning the Copa América?

Hulk: "We've given ourselves a wonderful opportunity of winning the competition, and all we need to do now is win our final two games to bring home the cup. Of course, we do have to win our games first and that is no easy task. There are still plenty of top teams left and they will certainly provide plenty of competition.

You will face Chile in the semi finals. What are your thoughts on this draw?

Hulk: "Chile have a fantastic set of players. The likes of Alexis Sánchez, Erick Pulgar and Lorenzo Reyes provide plenty of quality which we are well aware of. They performed well to knock Peru out in the quarter finals and they have proven in recent years that they are a side to be wary of. We will need to be focused and well-prepared if we are to progress to the final. That being said, we have the quality to beat anybody when we are on form and I am always confident of a victory."

Your recent form has certainly attracted interest from a host of top clubs. Do you see this competition as an opportunity to showcase your skills?

Hulk: "No, not really. I'm enjoying playing for Brazil and I'm certainly not using this competition to further my career. As far as I'm concerned, I'm playing at the highest level of my game right now. I am very happy at Schalke right now. We just won the Bundesliga a year after reaching the Champions League final. We are very competitive which is all I can ask for and we are putting together a world class team. Hopefully we can become a top European force in the coming years."

MJK46
5 years
Hulk seems like a great guy. Could you ask him to transfer saves so he can join me at HJK lol
1
Login to Quote

Griffo
5 years
I would love to see a Brazil v Argentina final!
1
Login to Quote

Balik
5 years
Great win in the quarter-final, hopefully we'll see a Classico in the final

mgriffin2012
5 years
Really great interview mate and fascinating insight! The Copa America final is in touching distance but Chile will be your toughest game yet!
1
Login to Quote 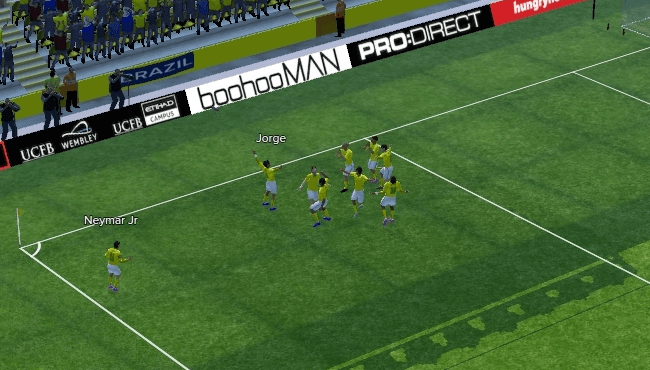 It was a semi final to forget for Chile as Brazil ran out 4-0 winners on a day where Schäfer's Samba army played their best football in years. It was a rampant performance as Wesley Santos bagged a brace, while Jorge and Mosca were also among the goals. 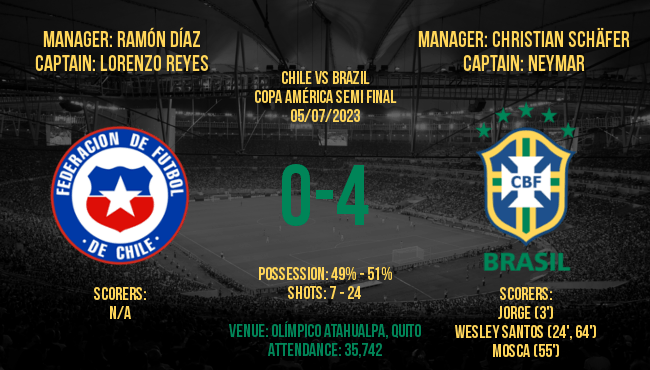 Christian Schäfer made five changes to the side that defeated Bolivia in the quarter finals. Marquinhos replaced Carlinhos in defence, while Jorge replaced Wendell at left wing-back. Fabinho and Casemiro made way for Bruno Paulista and Mosca in midfield, while Oscar was brought in for the tired Coutinho in attacking midfield. Wesley Santos kept his place as the starting striker, much to the surprise of the media.

It took one hundred and fifty seconds for Brazil to open the scoring, and it came from a corner routine. Neymar picked out Jorge in the box, and the latter saw his volley deflected past the goalkeeper and in. It was the perfect start to the semi final for Brazil.

Just over twenty minutes later, Wesley Santos doubled Brazil's lead. A quick passing move resulted in Mosca picking out Wesley Santos with his back to goal in the box. The striker turned on the spot and pinged his shot in to the top corner, out of the reach of Chile goalkeeper Angelo Pinilla.

Wesley Santos had the opportunity to double his tally in the first half when Oscar's thirty yard pass set him one-on-one but this time Pinilla came out on top, palming Santos' shot away.

Mosca got his name on the scoresheet in the second half, courtesy of yet another corner routine. Oscar's corner was met by Mosca who's header sailed over Pinilla and in to the goal to give Brazil an unbeatable lead.

Wesley Santos made up for his earlier miss just after the hour mark. Brazil had been pressing for a fourth and found it when Felipe Anderson set up Santos, who side stepped around Pinilla before rolling the ball in to the net. Chile were truly out of the game after this goal.

Wesley Santos should have added his third with ten minutes remaining. Casemiro's through ball was controlled well by the striker but he fired wide with the goal at his mercy, losing out on the opportunity to complete his hat-trick.

Christian Schäfer's Post-Match Interview: "This has been our best performance of the tournament so far! With each and every game, we've upped our performance level. We can be proud of ourselves for reaching the final and whatever happens, we can look back at this tournament and consider it a success." 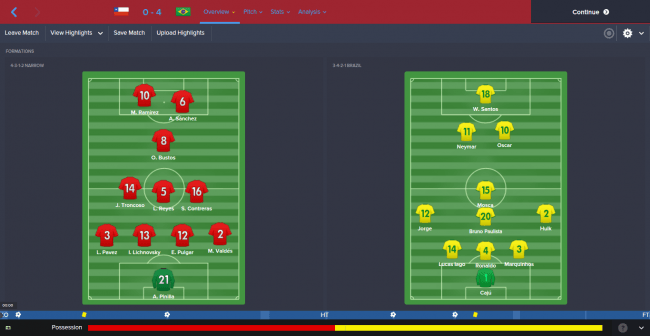 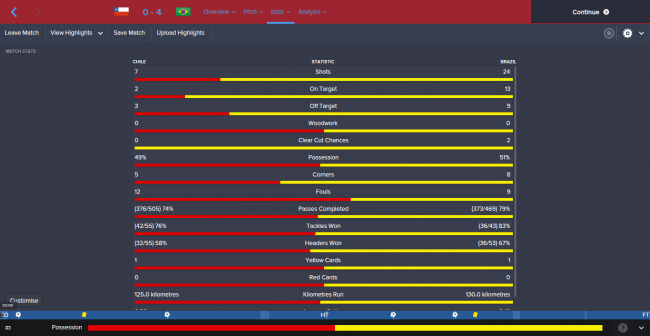 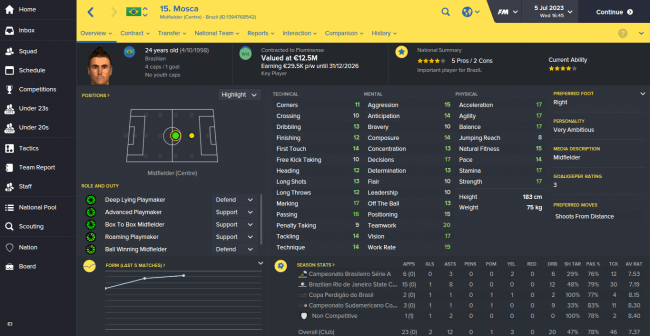 Previous Update: #39 - The Incredible Hulk?
Next Update: #41 - Schäfer: We Found Our Killer Instinct
Login to Quote

mgriffin2012
5 years
WOW! Thought Chile would at least put up a fight but that was phenomenal! Think this trophy is as good as yours now mate!
1
Login to Quote

Justice
5 years
mgriffin2012, well there's still one little game to play, with that being the final

Griffo, indeed! Our attackers were in tremendous form and absolutely buried them!
MJK46, there wasn't much they could do, our defence didn't give them an inch of room. My high-pressure tactic restricted their time on the ball and we caught them on the counter-attack every single time.
Login to Quote

Schäfer: We Found Our Killer Instinct 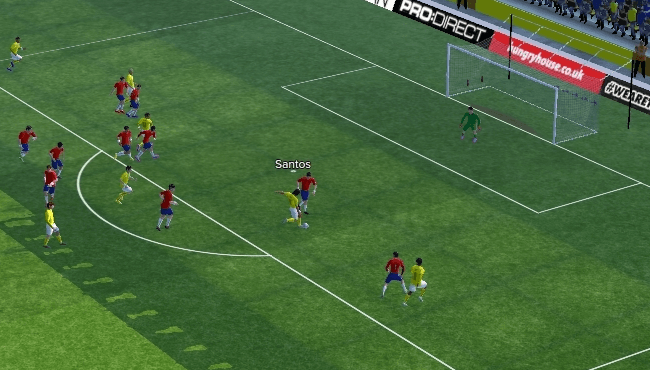 Having masterminded Brazil's journey to the Copa América final, manager Christian Schäfer is well on his way to becoming a football managing great. In an exclusive interview with Sky Sports Brazil correspondent Miguel Rigdinho, Schäfer was in great spirits with just one more obstacle between him and yet another major trophy.

Christian, your team absolutely demolished Chile. How pleased are you with this performance?

Christian Schäfer: "This is probably our best performance since I took charge. We were dominant in every single aspect of the game, and the result showed that. Each and every player gave it their all and didn't give the opposition a chance. From the first minute, we blew them away and we have now given ourselves a fantastic opportunity to lift the Copa América.

We got the early goal which is very important in modern day football. From then on, we kept on pressing for a second. We didn't hold back when we got that either. We were ruthless in front of goal, which is something we may not have been in the group stage. To score four goals in a semi final is a fantastic spectacle and now that we have found our killer instinct in front of goal, Argentina will certainly have a few nerves coming up to the final."

You made five changes to the starting line-up between the quarter final and the semi final. How important has the squad depth been this campaign?

Christian Schäfer: "I am lucky to be blessed with a large squad of talented players. We can rotate the entire starting line-up and still be within a chance of winning, no matter who we play against. We have many top players in each position and if one player were to get injured, another would step in to take his place. With the number of high quality players in our squad, we should always be able to challenge for honours."

You opted to start Wesley Santos up front yesterday, and he scored twice to bring his tally in the Copa América to three goals. However, Cebolinha has two goals to his name in this competition and many expect him to be starting most games for Brazil. Who will start in the final?

Christian Schäfer: "I think that's a decision for myself and my colleagues to decide behind the scenes. Both players have terrific ability, and they have had great Copa América campaigns so far. They offer different sets of skills and they can both change the game for the better. Whoever I start in the final will certainly be up to the task and more than capable of causing a problem or two for Argentina."

It doesn't get much bigger than a Brazil versus Argentina final, does it?

Christian Schäfer: "No, it really doesn't! Both nations have a proud history and I predict an exciting spectacle. We know just how good Argentina are when they play at their best, but we are a very good side too. We aren't afraid of coming up against Argentina, and I believe that we can prove to be more than a match for them. It all comes down to who performs better on the day, and I remain highly optimistic that it will be us."

Neymar has now equaled Cafú's record of 143 Brazil caps, and he will look to break this record in the final. How fitting would it be for Neymar to lift the cup on his record-breaking cap?

Christian Schäfer: "With all due respect to my bosses, Ronaldo and Romário, Neymar is the greatest player in the history of the Brazilian national team. He is, by quite some distance, the top scorer in the nation's history, and he is now one game from becoming Brazil's most-played player. It would be a fantastic occasion for him to lift the trophy, and certainly yet another reason for us to go out and win it. It is an opportunity for Neymar to write his names in the annals of football history, and I have every ounce of confidence that he will do so."

Justice
5 years
mgriffin2012, I'm sure it'll be one to remember!

tenthreeleader
5 years
Very impressive win for A Selecao. Of course, their manager had a lot to do with it