C.J.Lippo
6 years
Sorry mate, I'm with Feliks on this one. Get ready for a proper thrashing!
1
Login to Quote

Justice
6 years
MJK46, unfortunately it was too close for my liking

ScottT, he's a great player, but it's hard to consider him in the same bracket as Neymar etc

Feliks, C.J.Lippo & mgriffin2012, I should have known you Aussies would jump on the same boat 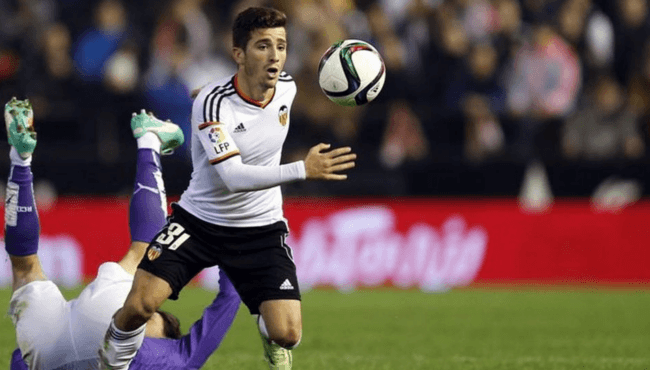 
For the first time since 2014, Lionel Messi was not named as the winner of the FIFA Ballon d'Or. The thirty-five year old Argentine resigned the prestigious award to Valencia's José Gayà, who played a key role in Spain's FIFA World Cup triumph in the summer. Indeed, this was the first time in eight years that somebody other than Lionel Messi had won the award, with Barcelona's captain having won the award on eleven different occasions.

Gayà claimed the award having made 39 appearances for Valencia and 14 appearances for Spain in what proved to be a productive year for the twenty-seven year old. The left-sided full-back possesses great pace and has a well-rounded technical ability, making him an efficient defender, while still being a contributor to attacking play.

It was his compatriot José Ramón García who claimed second place. The twenty-two year old striker of Manchester City started for Spain in the World Cup final in the summer, helping his country on to their second ever World Cup. Having made an €88M move to Manchester City in the summer of 2021, García was in terrific form for his side over the course of 2022, scoring 18 times in 30 games.

If there was ever an award for most consistent appearances in the top three, it would go to Cristiano Ronaldo. The thirty-seven year old looks set to leave Real Madrid in the summer when his contract expires, but he will certainly be leaving at a high. Having won the prestigious award on three occasions previously, Cristiano had been looking for a way to recapture the prize. 20 goals in 43 appearances for Real Madrid in 2022 did not prove to be enough, however, despite leading his side to Liga BBVA success.

The same three players claimed the same three places in the World Player Of The Year award, and were included in a FIFA World Team Of The Year which included no Brazilians. There were four Spaniards and three Argentinians present in a starting eleven which also included the likes of Hirving Lozano, James Rodríguez and Daniele Rugani.

Meanwhile in Europe, it was AS Monaco's Russian winger Roman Arkhipov who claimed the European Golden Boy award for the third year in a row. The tricky speedster already has 21 caps for his country to his name, and has become one of the most exciting players in world football. Perhaps he could go on to claim a stake for the FIFA Ballon d'Or in the future. 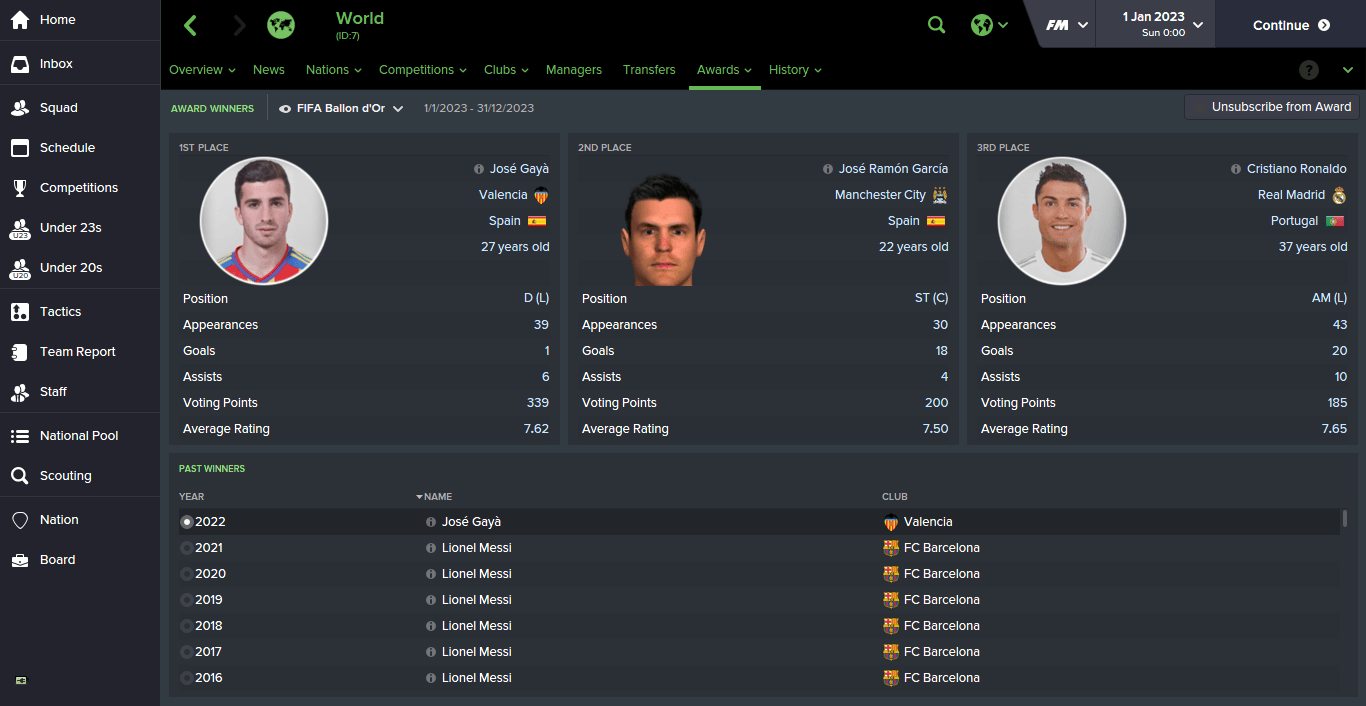 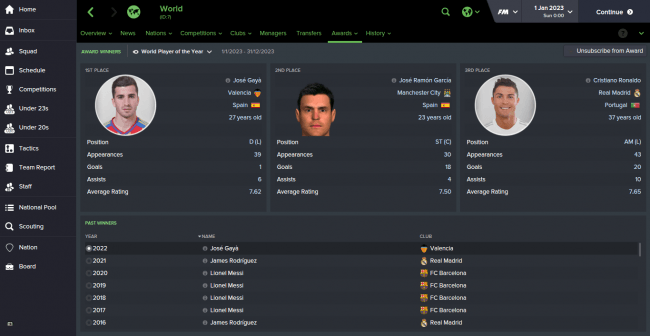 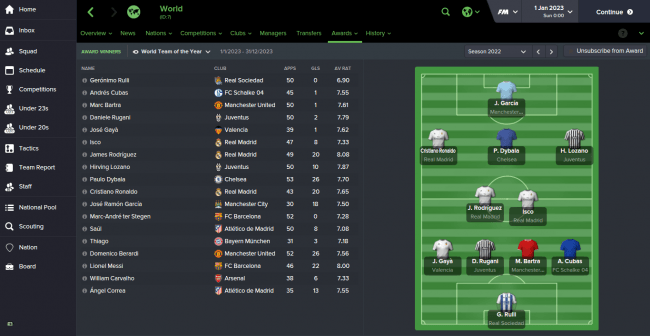 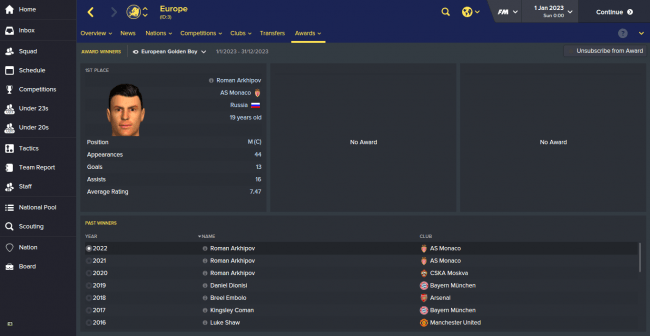 MJK46
6 years
So did Messi retire or just crap out??
1
Login to Quote

Live For FM
6 years
messi has won everything

Justice
6 years
mgriffin2012, MJK46, Life For FM, Messi's still starting for Barcelona at the moment, I don't see him playing any more than two or three seasons though.
Login to Quote 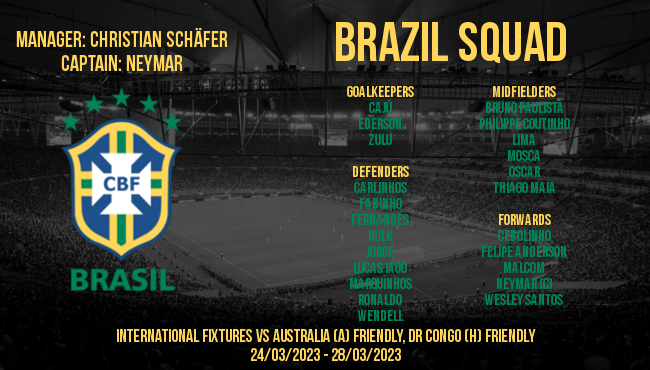 Christian Schäfer Named His First Brazil Squad Of 2023
Christian Schäfer has named a much-changed Brazil squad for this month's friendlies against Australia and DR Congo as he looks to experiment different line-ups ahead of this summer's Copa América competition. Goalkeepers Cajú and Zulu, central defenders Carlinhos and Fernandes, central midfielder Mosca and striker Cebolinha have all been called up for the first time, while defenders Lucas Iago and Marquinhos return to the squad following long-term injuries.

Schäfer's squad is a relatively ageing one, with an average age of 26.65. Captain Neymar, who enjoyed his thirty-first birthday last month, needs six more goals to reach a century of Brazil goals, and requires just seven more appearances (137) to overtake Cafú's record of 143 Brazil caps. Marquinhos is in line to make his 70th Brazil appearance, while six players are in line to make their debuts. 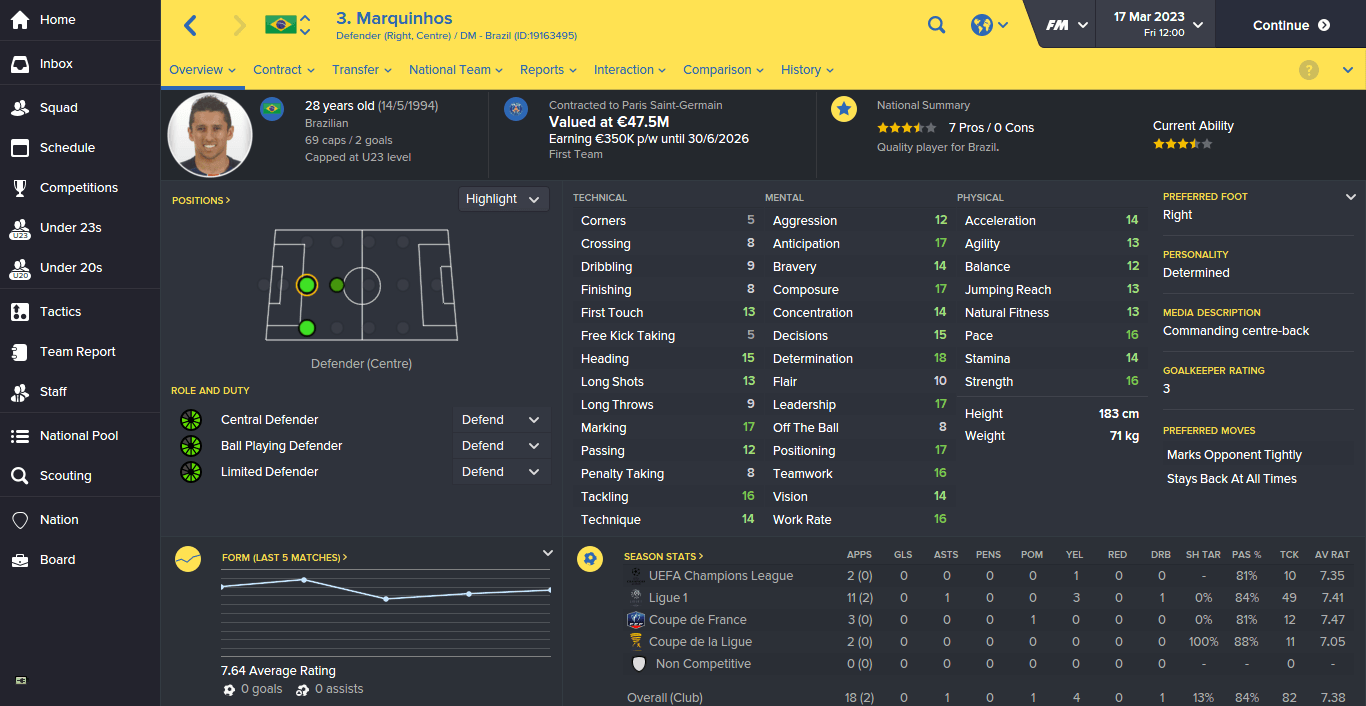 Paris Saint-Germain captain Marquinhos returns to the Brazil squad having been kept out for five months after breaking his leg in last summer's FIFA World Cup. The central defender is set to make his 70th appearance for Brazil and will prove to be a crucial part of Christian Schäfer's squad in the upcoming Copa América. Marquinhos has been in fantastic form this season and strong performances in Brazil's upcoming friendlies will cement his place in the starting line-up. 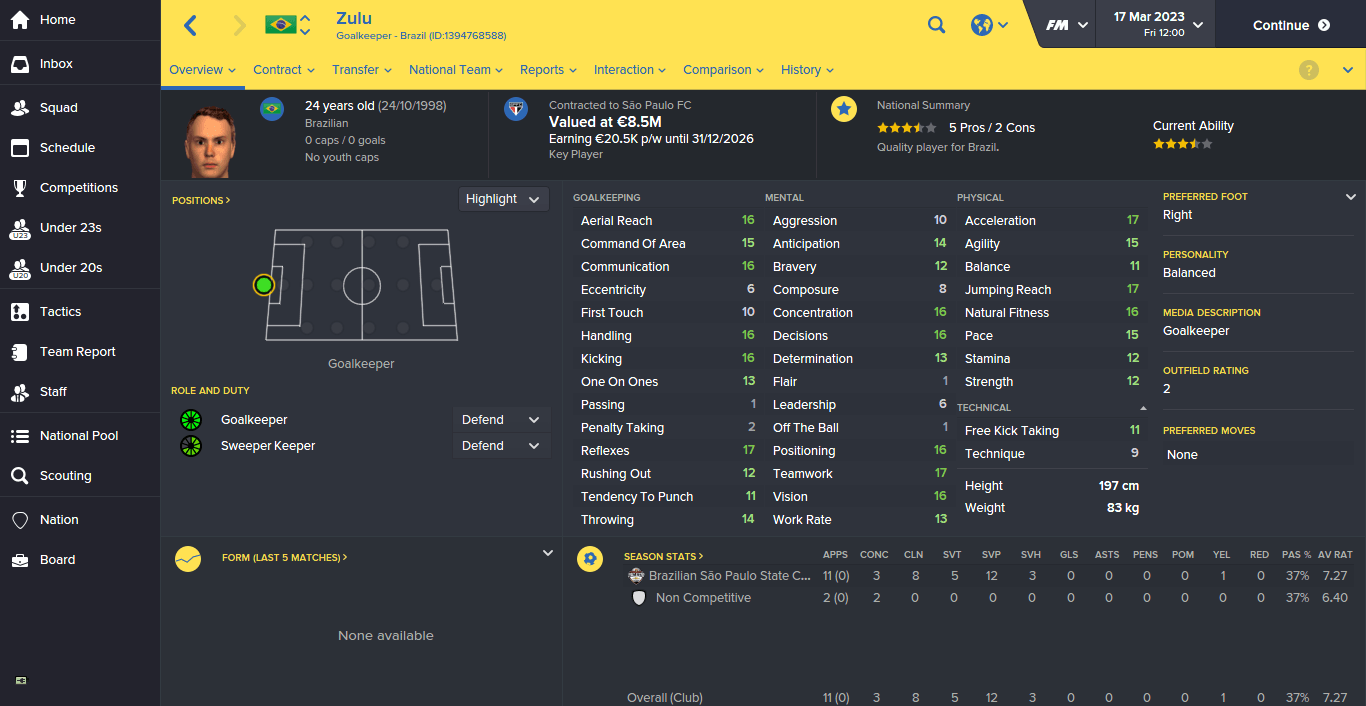 Christian Schäfer called up two new goalkeepers to his squad to compete alongside regular Ederson, and it is Zulu who looks most likely to impress. The São Paulo shot stopper has been in tremendous form this season, keeping eight clean sheets in eleven appearances in the Brazilian Série A. The twenty-four year old has been linked with a move to one of Europe's top clubs in the summer, with Valencia and Benfica in particular taking keen interest, and this summer's Copa América would be the perfect stage to showcase his talents, should he make Schäfer's squad. 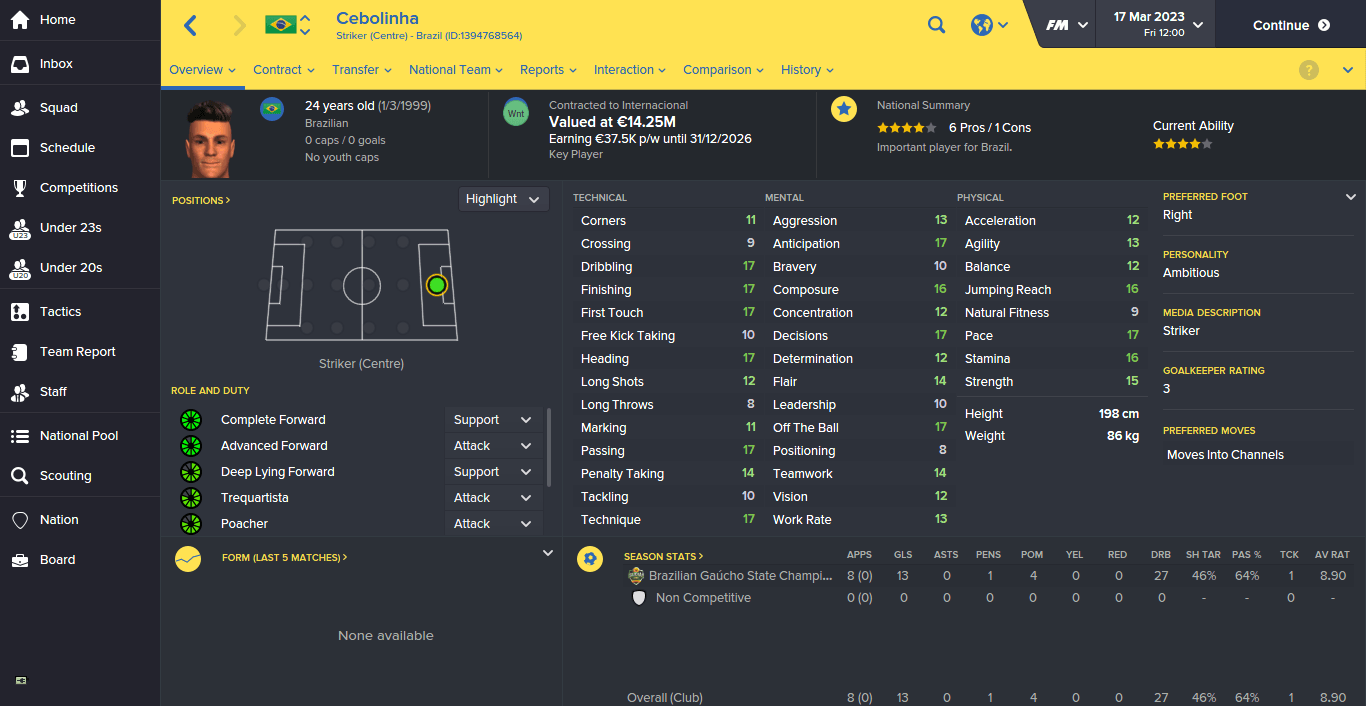 The breakthrough of Wesley Santos produced much excitement in Brazil, but it is Internacional's twenty-four year old striker Cebolinha who looks set to take center stage. The 198 cm tall forward has scored an incredible thirteen goals in eight appearances in the Brazilian Serie A this season, and looks set to compete for a spot in Schäfer's squad for the summer.

The Melbourne Cricket Ground will host Australia versus Brazil in what is expected to be a thrilling affair. Four days later, Brazil will host DR Congo Arena da Floresta. Brazil's opponents are ranked 13th and 18th , respectively, in the FIFA World Rankings and will certainly pose a threat to the Seleção. Can Brazil's new boys impress, or will Neymar & Coutinho steal the show again?

Griffo
6 years
GET AROUND THE SOCCEROOS!
1
Login to Quote

Justice
6 years
Griffo, I'll have to let them win just for you

Live For FM, I'll explain their current predicament once their current season is over.
MJK46, hopefully they won't be too much of a challenge for Brazil 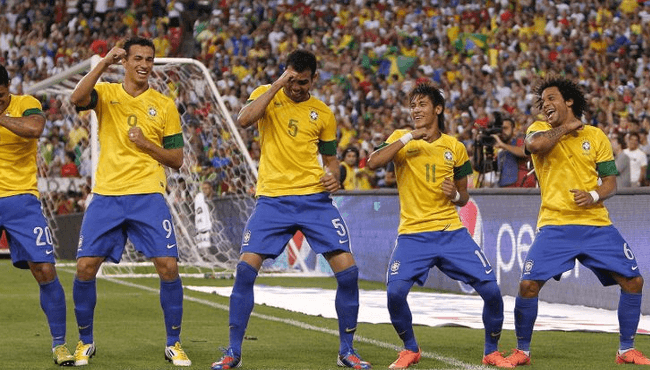 A Much-Changed Brazil Team Put Australia & DR Congo To The Sword
Christian Schäfer kept his 100% win record as Brazil manager as he saw his side defeat Australia and DR Congo. Six players made their debuts for Brazil over the course of the two friendlies, and this will give Schäfer much food for thought as he plans his squad for the summer's Copa América. 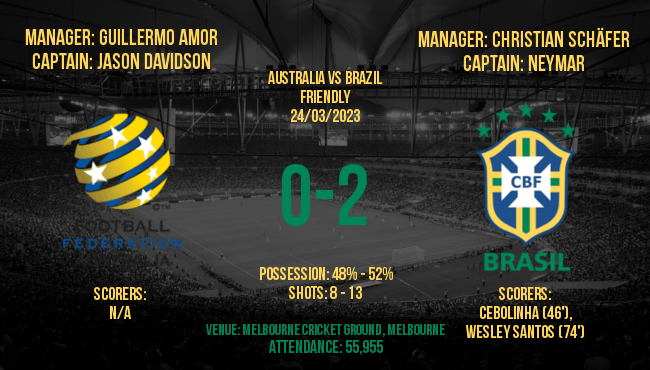 Goalkeeper Zulu, defenders Fernandes and Carlinhos, midfielder Mosca and striker Cebolinha all made their Brazil debuts against Australia in what was certainly an experimental line-up. Marquinhos made his first appearance for Brazil since he broke his leg in last summer's World Cup, while Neymar made his 138th Brazil appearance.

Brazil began the game as the more dangerous of the two sides and it was captain Neymar who nearly opened the scoring, as he showed Massimo Luongo a clean set of heels before firing narrowly over the crossbar.

Debut 'keeper Zulu was called in to action for the first time after seventeen minutes when he was forced in to a low save from Awer Mabil's driven cross, before smothering Mathew Leckie's smart drive.

Cebolinha had his first chance of the game just before the half-hour mark when Neymar picked him out with a no-look through ball, but Mathew Ryan produced a phenomenal save to deny Brazil's striker a debut goal.

Cebolinha did get on the score-sheet, however, as it took just one minute of the second half for Brazil to break the deadlock. Coutinho turned provider after cushioning a Neymar pass in to the path of Cebolinha, who powered home an emphatic finish to give himself a flying start to his Brazil career.

Cebolinha almost added a second just ten minutes later. Hulk found himself with plenty of space on the right wing, and curled a cross in to the box which was met by Cebolinha's head, only to be parried on to the post by Mathew Ryan.

Substitute striker Wesley Santos killed the game when he added to Cebolinha's opener, heading past Mathew Ryan from a Fabinho cross to continue his impressive start to life as a Brazil player.

Australia had no reply to Brazil's goals and the game eventually ground out to a comfortable 2-0 victory for the visitors. 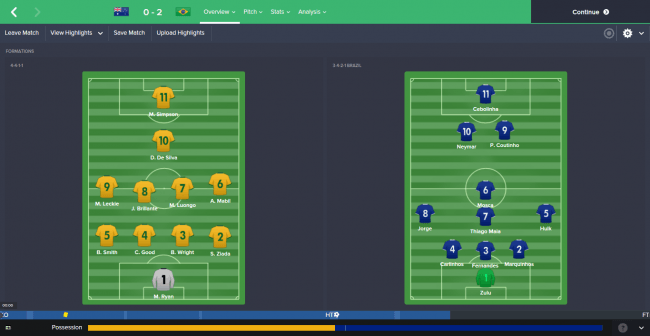 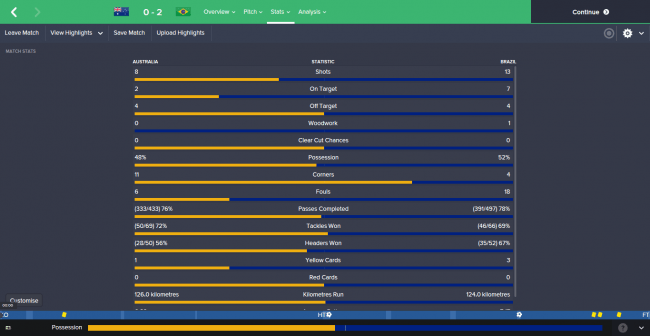 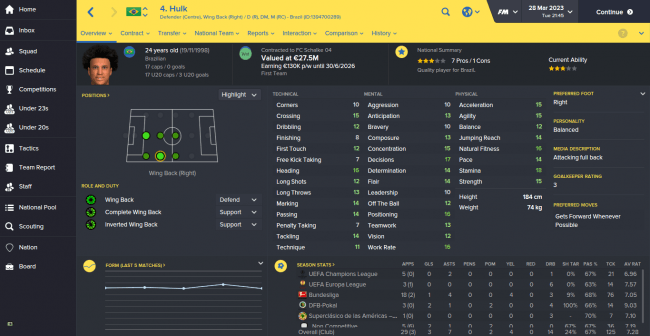 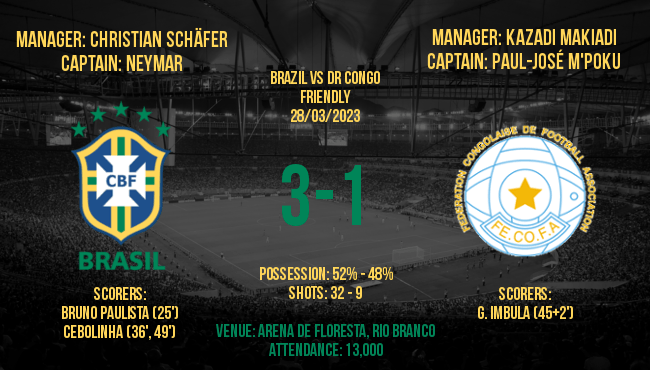 Goalkeeper Cajú made his Brazil debut against DR Congo, as Brazil looked to make it two wins out of two in this international window.

Brazil made a flying start to the game as wing-back Hulk tore in to the opposition area, firing a fierce shot in to the side netting, setting the tone for the rest of the game.

The first real opportunity of the game was presented to Cebolinha, who made his second appearance for Brazil. Coutinho spun away from two defenders on the right-hand side before firing in a low cross towards Cebolinha, but his shot was blocked brilliantly by David Kinsombi.

Brazil broke the deadlock after twenty-four minutes, and Cebolinha was at the heart of it. The striker held off a number of defenders before playing Hulk in to free space on the right wing. The wing-back's cross was headed away by Kinsombi, but fell to Bruno Paulista who was on hand to drill a half-volley in to the bottom corner.

It should have been two-nil eight minutes later, if not for Loic Badiashile's brilliant intervention. Coutinho, who was at the heart of every Brazil move, crossed for Cebolinha in the box. The ball fell for fellow attacker Oscar but his volley from eight yards out was tipped over the bar by DR Congo goalkeeper Badiashile.

Brazil added a second goal to the game, and it was the scorer of the first goal, Bruno Paulista, who engineered it. The midfielder picked out Cebolinha in the box, who's shot rocketed in to the top corner to give him two goals in as many games for Brazil.

DR Congo got a goal back in stoppage time of the first half through some sloppy Brazilian defending. Marquinhos failed to clear the ball properly, and Gianelli Imbula was on hand to prod home past the helpless Cajú.

Cebolinha restored Brazil's two-goal cushion after the break when he headed Neymar's free-kick in off the crossbar after being left completely unmarked in the area, and nearly completed his hat-trick when his swerving cross had to be headed off the goal line by David Kinsombi. 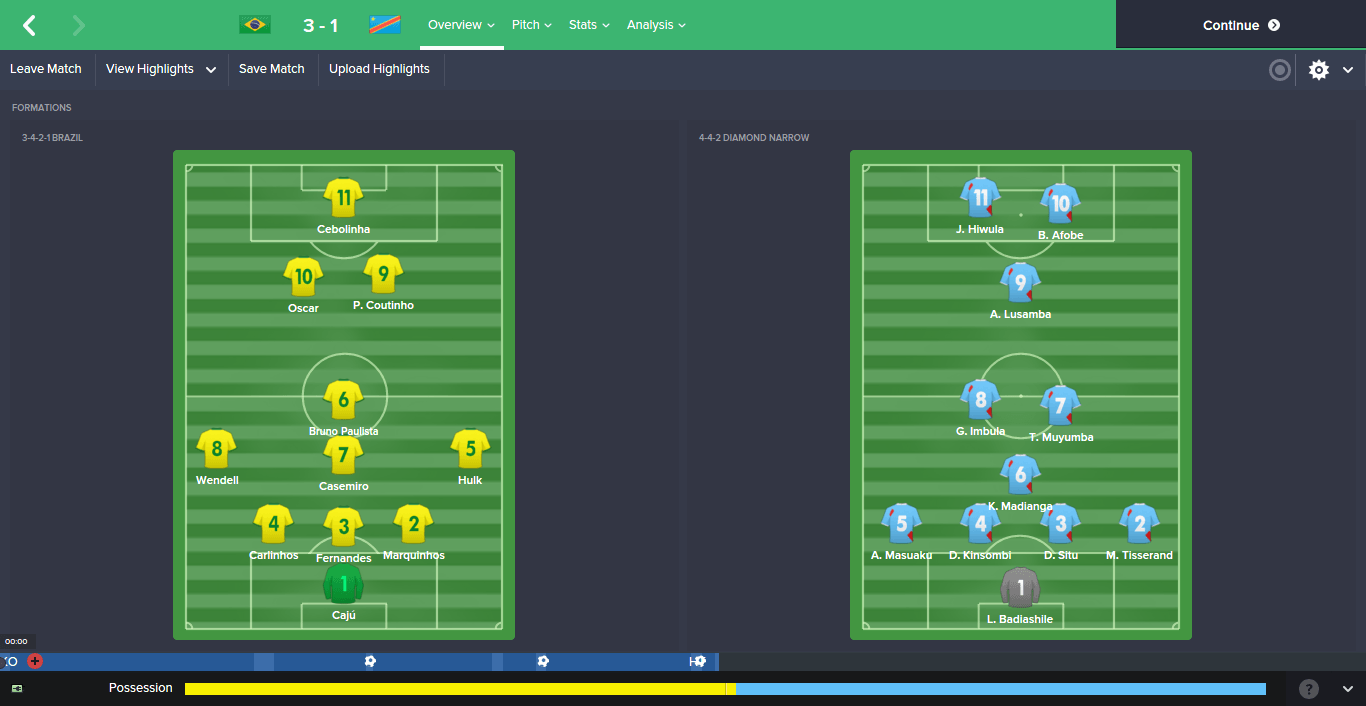 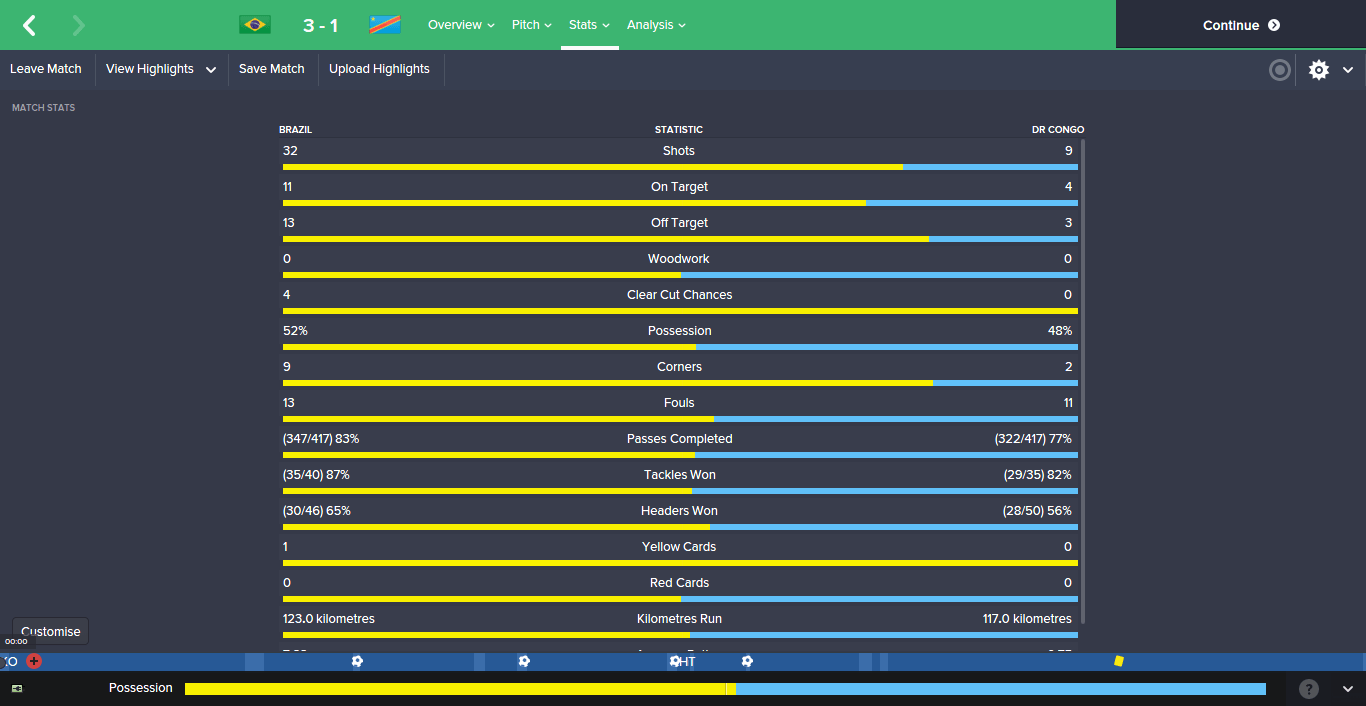 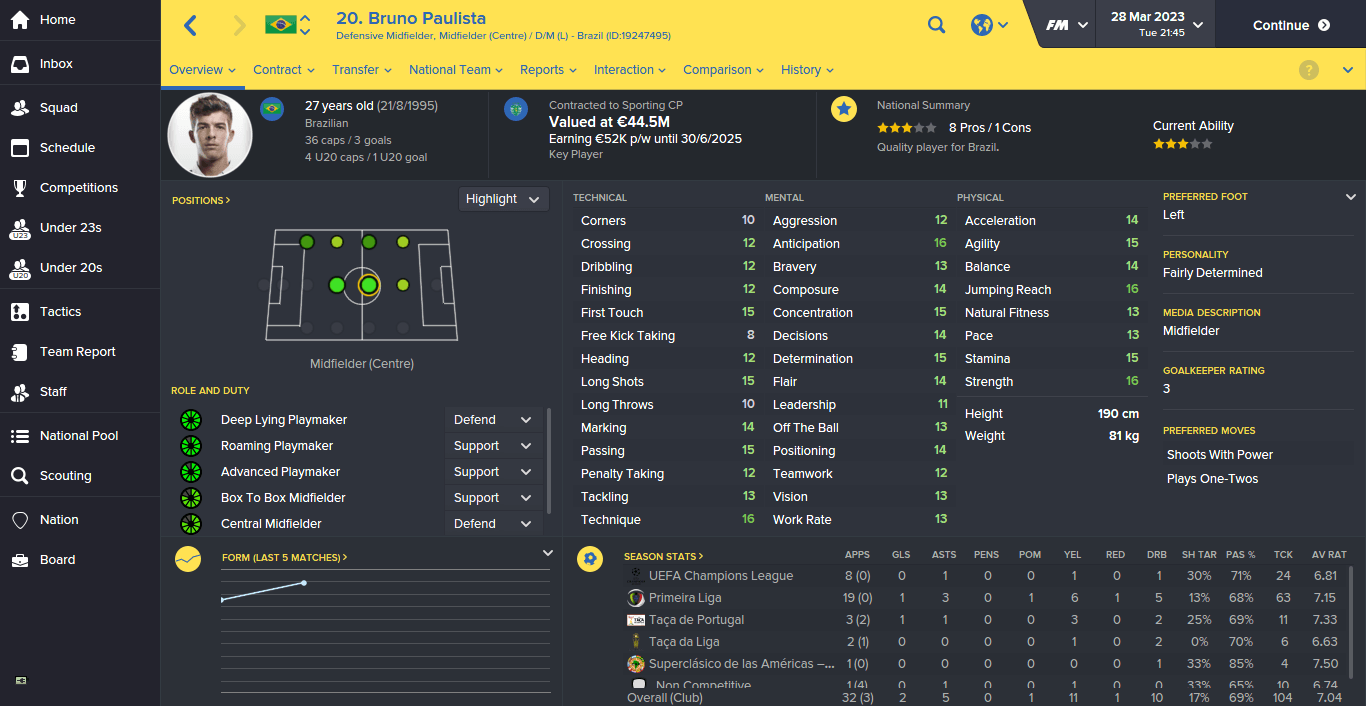 The next international break will bring us the Copa América itself. Friendlies against Cameroon and USA will give Brazil a good warm-up, before facing Peru in their first game of the competition on 18th June. Can Brazil bring back the trophy? Can Der Professor write his name in South American football folklore?