mgriffin2012
4 years
Some good signings in there mate, good luck!
Login to Quote

ScottT
4 years
Harry Forrester and Ziggy Gordon are two very underestimated talents, looking forward to see how they do.
Login to Quote

a_esbech
4 years
This is simply too random to be random, so I just assume that you picked the team just for me

I wish you all the best. If you need help understanding the new league system and playoffs let me know.
Login to Quote

InvertedWingbacks
4 years
I was actually just thinking that! The whole phase thing has thrown me a little! I'm on my phone just now but I'll drop you a wee message tomorrow or something to get the lowdown

in other news, thanks for all your support guys!
Login to Quote

Justice
4 years
Good to see you have the freedom to restructure the squad, hopefully the new signings can settle in quickly and perform!
1
Login to Quote 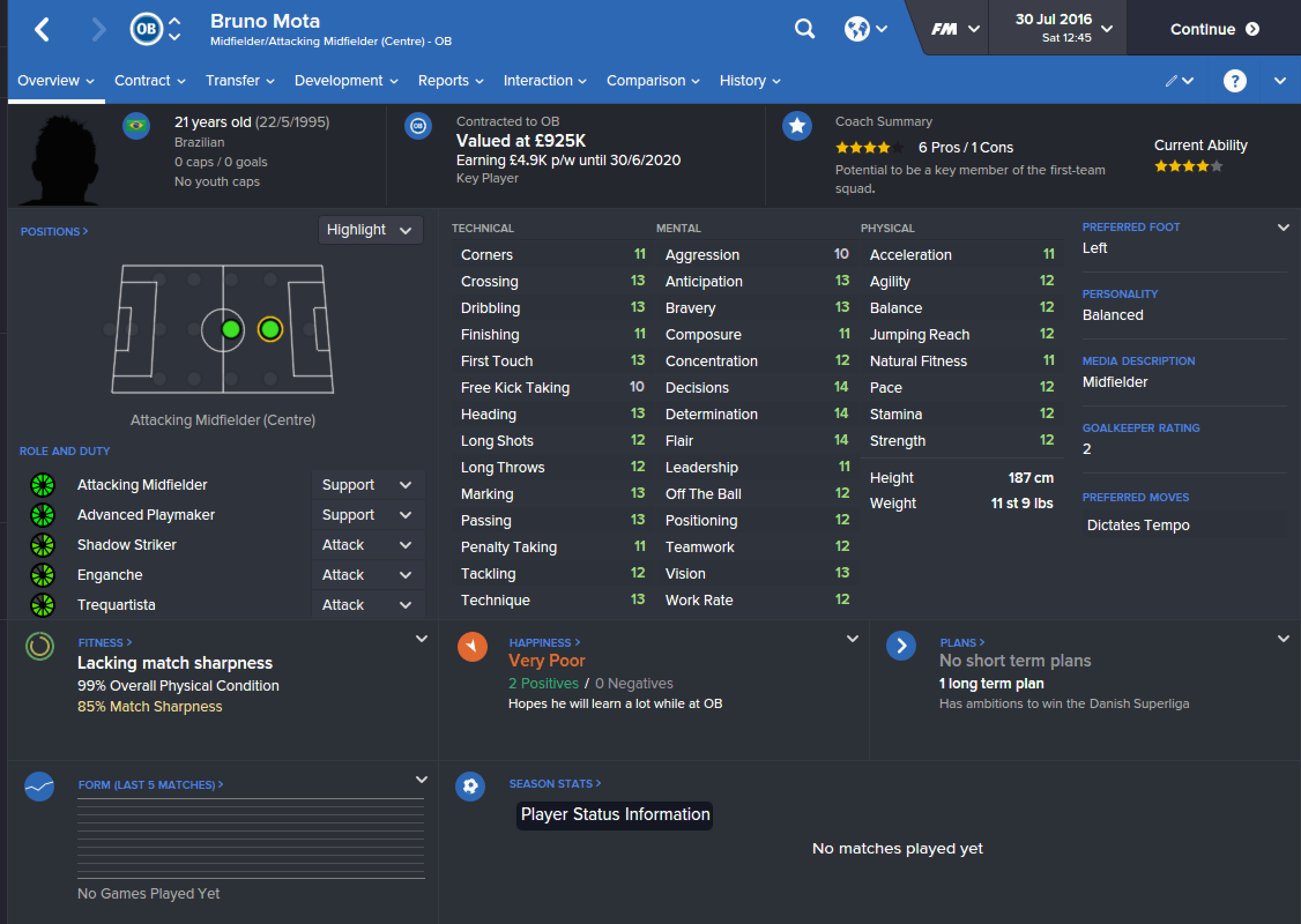 Well, there he is. As I progress through my second season (well, i've got to July so far), I've finally unearthed a player who I believed was worth blowing the £1.5m budget the board gave me on. Bruno Mota is a 21 year old Brazilian attacking midfielder, who has joined us from Atletico Paranense, boasting a career record of 5 goals in 19 matches.

Of course, that is not particularly prolific, however he does have a technical skill set which I believe will give us an edge on the pitch. He likes to dictate the tempo of the game, and he's also exhibiting an eye for a killer pass - traits which I think will make him an influential playmaker for us.

I'm hoping he can really make a difference this season, although I am somewhat concerned by the £3,3m release clause for foreign clubs which was forced into his contract by his agent...I may have to try to renegotiate his deal in the next season or so
Login to Quote

MJK46
4 years
Awesome signing. I hope he does amazing for you.
Login to Quote

ScottT
4 years
Great pickup for someone with your reputation, should be at least sold on for profit!
Login to Quote

Jack
4 years
Easily one of the most well-rounded players I've seen this year - top signing mate!
Login to Quote

mgriffin2012
4 years
Looks like a very good pick up mate and could well be the star of this OB side for a while to come!
Login to Quote