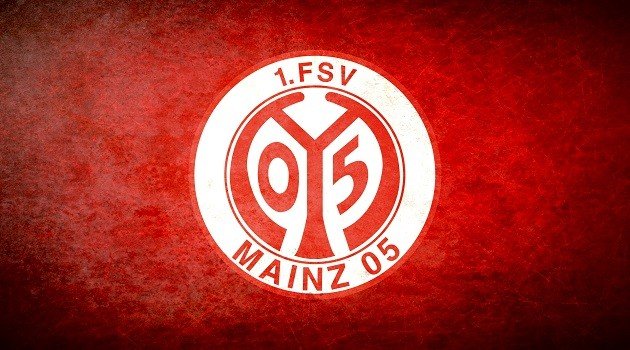 No sooner had Bayern Munich's Philipp Lahm held aloft the Bundesliga title, the Club's 24th in actual fact, FSV Mainz 05 President, Harald Strutz, had swung the axe on another Manager. Kasper Hjulmand had been sacked back in February, the side had went through a bad run of results and the Fans had seen enough of the underachieving Dane.


The Club responded by placing first team coach and Fans favourite Martin Schmidt in charge of senior duties until the end of the season. Results did improve. Mainz finished mid-table, but the latter didn't do enough to convince Strutz of a permanent deal and last week he was told his short term contract would not be renewed. 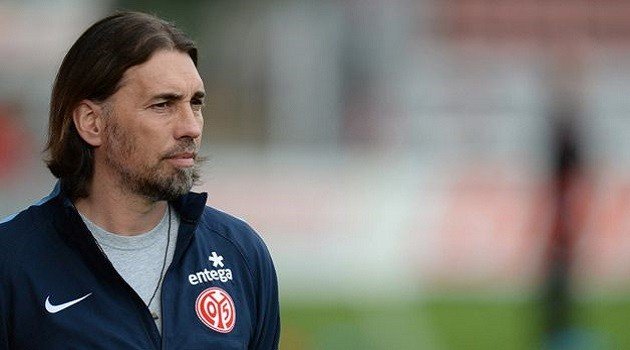 
The question 'Die Nullfunfer' Fans are keen to know the answer to is - who will be their next Manager? Harald Strutz has done well over the years, Mainz have became a settled Club in Germany's Bundesliga. Financially they are stable, they have recently moved into a new state of the art Stadium and have a large Fanbase following. But, are the Club and Fans happy to finish mid-table year in, year out?


Reports flying around are that Strutz is keen to appoint someone who can take Mainz to the next level. Felix Magath may be interested in a return to Germany to take the reins at the Coface Arena. English Championship side Middlesbrough have acted swiftly to reject any links with Spaniard Aitor Karanka. Other media sources strongly suggest former Marseille Manager Marcelo Bielsa is in line for the job. One local newspaper claims to have spotted Strutz and Bielsa in a Café on the Rhine.


But the question remains unanswered: who will be the next Mainz Manager?

MJK46
5 years
Good luck and I love a Bundesliga story.
Login to Quote

mgriffin2012
5 years
This should be fun mate! The Bundesliga's not an easy league to compete in so best of luck!
Login to Quote

ScottT
5 years
Looking forward to this! 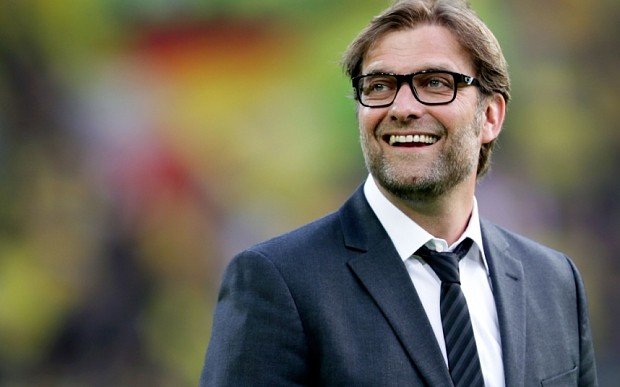 Liverpool Football Club have been left heartbroken as "manager-to-be" Jürgen Klopp has turned his back on Merseyside to link up with his first love, FSV Mainz 05.


The former Borussia Dortmund Manager had already agreed terms with Liverpool hierarchy and was due to jet in and be presented to the Fans tomorrow morning on the Anfield pitch infront of the Kop. But in the eleventh hour Klopp has released a statement on German TV saying,


"I can only apologise from the bottom of my heart to all connected with Liverpool Football Club. It has been a whirlwind last few days and it wasn't until I sat down and took it all in that I realised I had made this mistake. Everyone knows I have a love for FSV Mainz 05 and with an opportunity to return home I could not resist. I am perfectly aware of the problems I have caused in England but I hope everyone understands and forgives."


"As well as apologising to all at Liverpool Football Club, I should also thank them for the chance the Club presented me with. The history Liverpool holds within it's great walls are something very special, recognised all over the World and in recent years I have witnessed some wonderful football matches at Anfield and I hope to be welcomed back to enjoy many more. I am sorry I cannot be in England at this time but I wish the Club all the very best for the future." 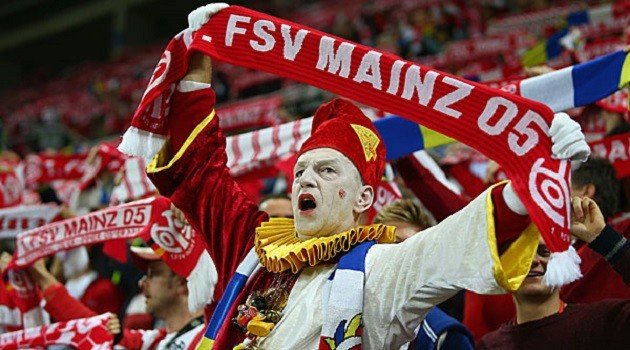 Fans are delighted with the news


Mainz Fans on the other hand are obviously over the moon with President Strutz' appointment. Klopps move back to his home Club is a huge coup for not only Mainz but the whole of German football.


Upon his retirement playing for Mainz 05, Klopp was appointed as the Club's Manager. He remained at the helm for seven years, during which time he led the team to its first appearance in the Bundesliga and qualification for the 2005-06 UEFA Cup. At the end of the 2006-07 season Mainz 05 were relegated, but Klopp chose to remain with his beloved Club. However, because they were not able to achieve promotion, he resigned at the end of the 2007-08 season. He finished with a record of 109 wins, 78 draws and 83 losses.


He was then approached by Borussia Dortmund and signed a two-year deal. Klopp had a fruitful spell at 'Der BVB', defeating rivals Munich in the Final of the T-Home Supercup in his first season. His side then went on to improve each year and were renowned for playing attacking football, fluent and attractive to watch.


His heart has always remained with Mainz however and after turning down a mega money deal in the English Premier League with Liverpool, Jürgen Klopp has finally returned home.
Login to Quote

ScottT
5 years
Great update mate, interesting to see Klopp make a return to Mainz, let's see if he can do better than what he did in his first spell, though it will be tough since he did a remarkable job!
Login to Quote

mgriffin2012
5 years
Great appointment for Mainz, really sad news for us LFC fans :'( keep it up though mate, looking forward to seeing where this goes!
Login to Quote

Justice
5 years
Now that is a move and a half for Mainz!
Login to Quote

InvertedWingbacks
5 years
big name there! gutted as LFC will miss him, but it'll be interesting to see what you achieve!
Login to Quote 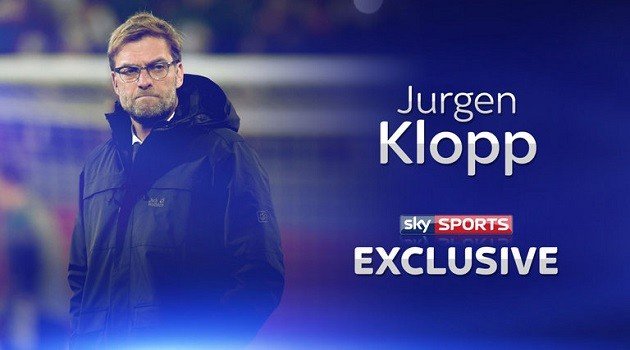 Reporter:
Welcome back Jürgen, it has been seven years since you left Mainz, is it good to return and what's changed?

Klopp:
Hello, what a great feeling this is! I am very happy to be back with the Club I support and love. Very happy! It has been a quick seven years, but looking around, I can see alot has changed since I was here. The new stadium is wonderful - I've been here as a supporter and as Dortmund Manager ofcourse but to come here this morning as Mainz Manager was something very special. I recognise a few familiar faces and plenty of new ones I look forward to meeting.

Reporter:
How did this opportunity come about for you? It was public knowledge you had all but signed to be the Liverpool Manager.

Klopp:
Harald (Strutz) gave me a call about ten days ago, we had a chat and caught up with things, it had been a while since we last spoke. I told him about my potential move to England. He spoke about the meeting he'd just come from with Martin (Schmidt) and told me the job was available and they'd do all it took to bring me home. He gave me time to think things through and after a few hours I phoned Harald back and said "let's do it."

Reporter:
After agreeing terms with Liverpool, how do you feel about turning your back on them when all their Fans were expecting Jürgen Klopp to be at Anfield this morning?

Klopp:
As I said in my official statement on Monday, I am deeply apologetic. I have spoken personally with owner John Henry and Chairman Tom Werner, they were very understanding and I thank them. The move wasn't right, I'm at home here in Germany and back in Rhineland-Palatinate. Today is about Mainz, not any other Football Club.

Reporter:
Over recent years there hasn't been an awful lot for the Fans to cheer about. What can we expect different now that you're back Mr. Klopp?

Klopp:
I agree, I follow the Club at large daily and read every report and take in as many matches as my life, and wife, allow me. Unless people are happy to see the team finish mid-table with no consistent run of results and no targets to aim for then there has to be a change. This is important. We need a squad who can learn as a unit and mature into a sustainable, clinacal side. I'll be looking to bring in players who want to play for Mainz, the badge, the Fans and if there is any doubt in that players mind, then we'll move to our next target. Last time around, we gained promotion from 2.Bundesliga and we were buzzing, we even played in the UEFA Cup. Things just didn't work out and we ended up back, which at the time was probably our level, in the second division. We had a brilliant few years and we all enjoyed it. Now, Mainz are established in the top flight but the Chairman, myself and I'm sure the Fans will agree that the next step is now upon our fantastic Football Club. 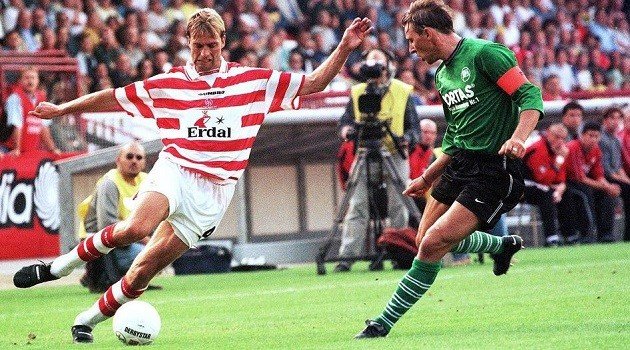 Jürgen Klopp during his playing days

Reporter:
What can the Mainz supporters expect different this time around regarding your style of play to your previous spell as Club Manager? At Borussia Dortmund you were well known for attacking football.

Klopp:
Obviously I have developed and matured as a Football Manager. I was able to learn alot about the game and myself during my time with Dortmund. The Fans will see a more structured, tactically aware team. We will aim to please the crowd with an attacking philosphy. Pushing our opponents to their defensive limits. My passion and love for this Club will always remain, I want Mainz to succeed in every way possible and I will do all I can to achieve just that.

Reporter:
Do you have any regrets about leaving Mainz in 2008?

Klopp:
Leaving the Football Club you support is always difficult, I had played all my senior career here and this place obviously means alot to me. But I left for the good of the Club. At that stage, I had done all I could, we failed to regain promotion back into the Bundesliga and it was someone elses turn to try. We did great things together prior to my departure. Jörn Andersen came in and then obviously Thomas (Tuchel) did a remarkable job aswell. So I don't think I regret leaving, it was just difficult. Alot of tears were shed that day.

Reporter:
Had you made plans for Liverpool Football Club regarding Transfer Targets?

Klopp:
During my time away from management I had the chance to watch as many football matches as possible. There were players I would follow and check up on, players I possibly could have tried to bring to England. Who knows? Players I may bring to Mainz. But there is no use talking about that now. I am here, very happy to be here as your Manager.

Reporter:
Where do you see FSV Mainz 05 in three years time?

Klopp:
We have ambitions to be Bundesliga contenders within my three contracted years. The Club has the correct calibre to do so. Financially we are sound so the dream has to be big, to win the league title and guide us into the Champions League group stages, now that would be wonderful. Thinking about it has made me very excited to be Mainz Manager.
Login to Quote

mgriffin2012
5 years
Great interview man! This is gonna be the start of a very successful Era for Mainz I think

You are reading "Fog On The Rhine".