Transfers
There was work needed in the squad. We didn't even have a rightback that was able to play for us. Our centrebacks were awful and i needed better players in the midfield. We did do that with 5 signings: 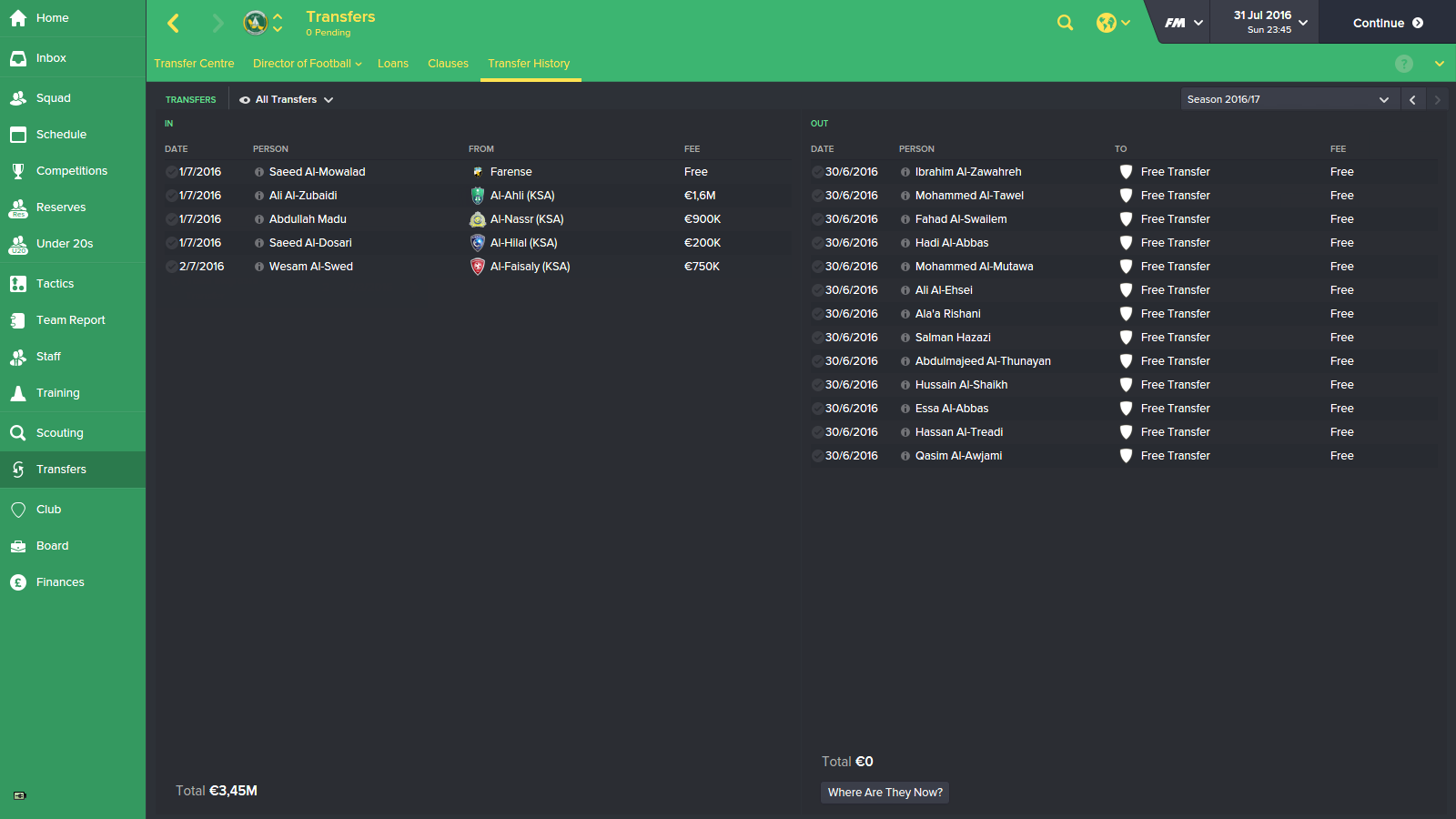 Here my opinions on the players and their stats.
Saeed AL-Mowallad: 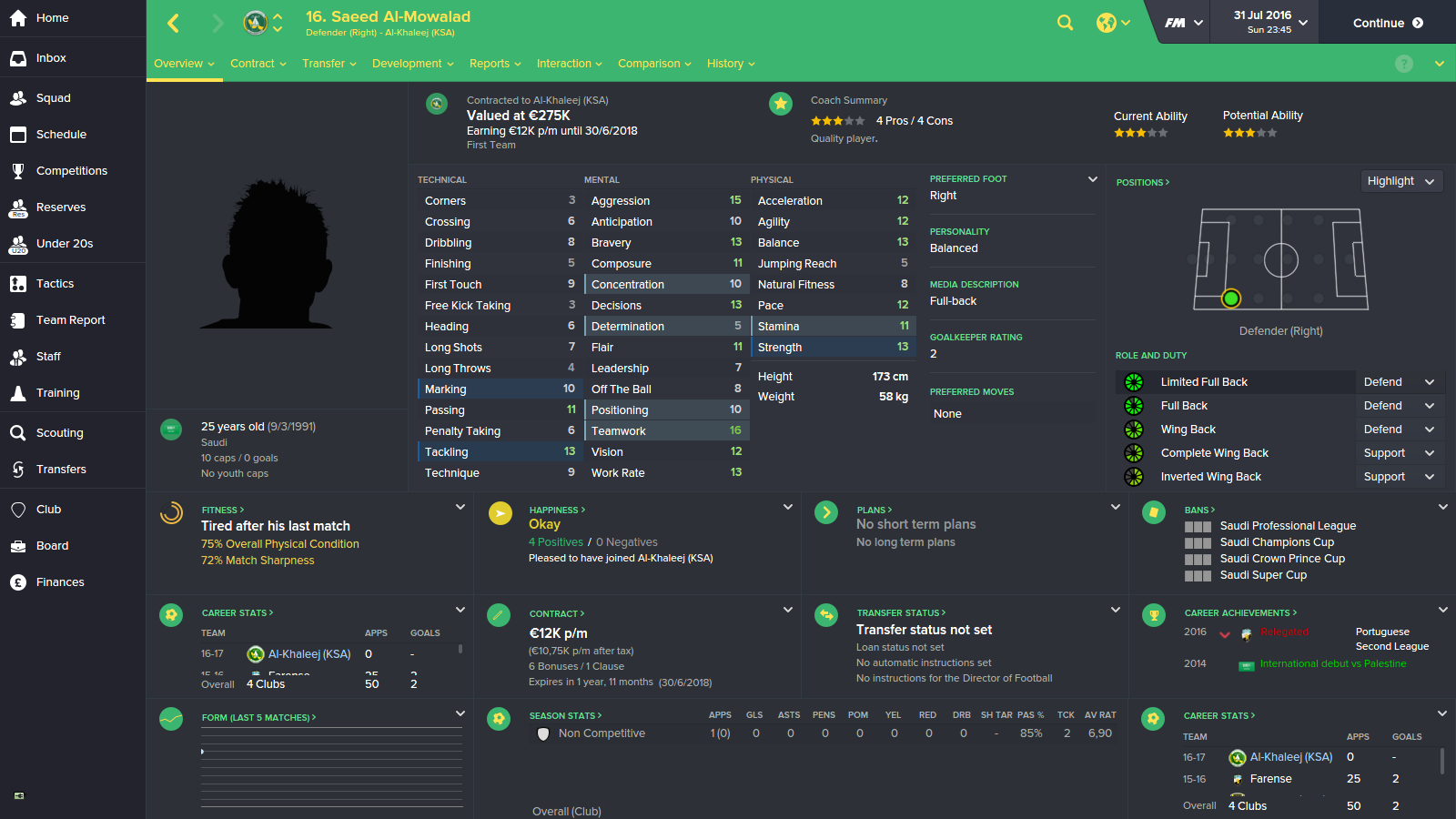 Good backup rightback coming for a free so not that big of a risk. 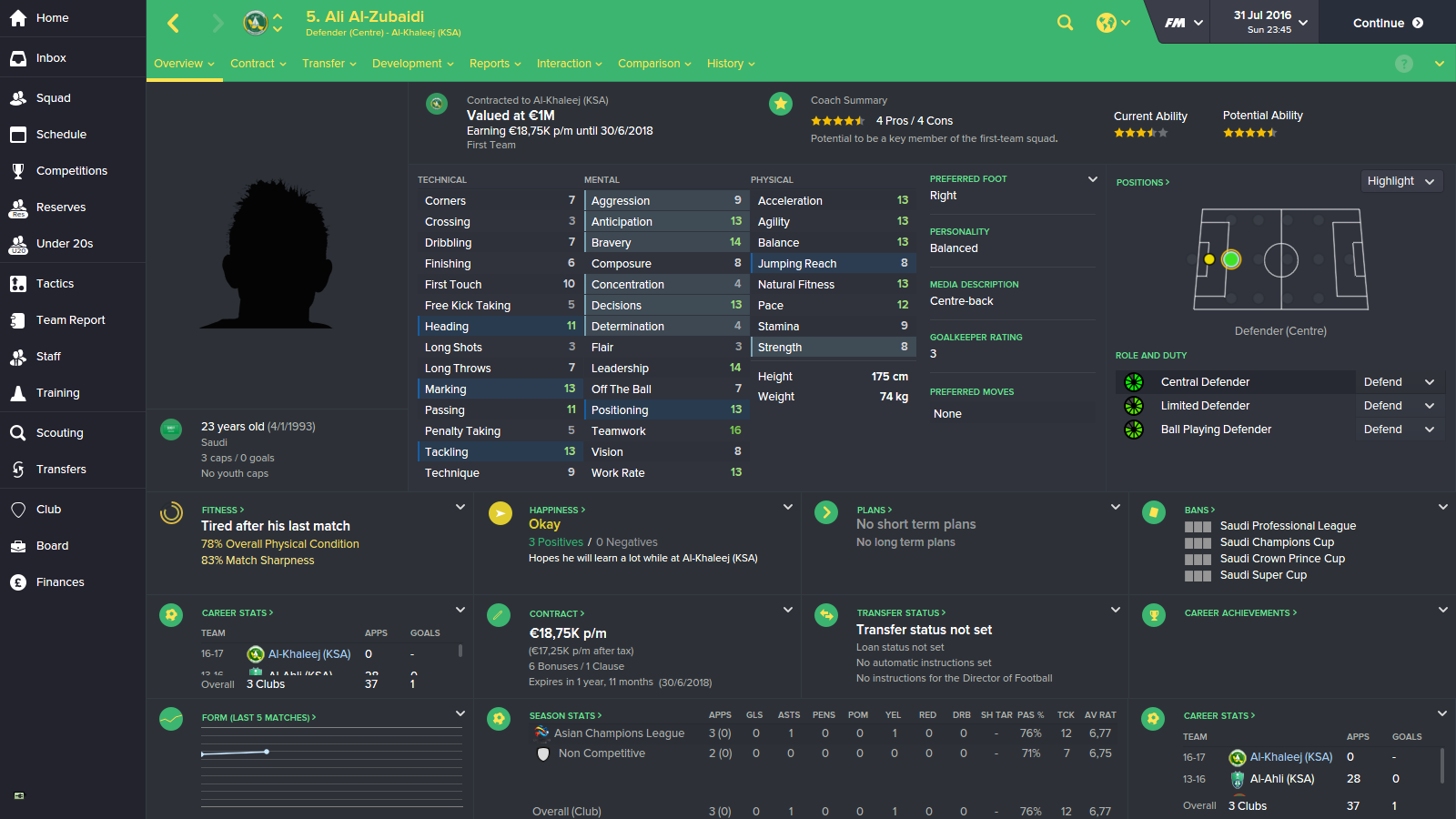 A pretty big amount of many for us, but i think it's worth it. Saudi-Arabian is always great and alreasy one of the star players in the team. Also pretty young with some potential.

Our midfieldwas pretty weak and needed atleast one better player. MAdu fits that perfectly and is also Saudi which is great.
Saeed Al-Dosari 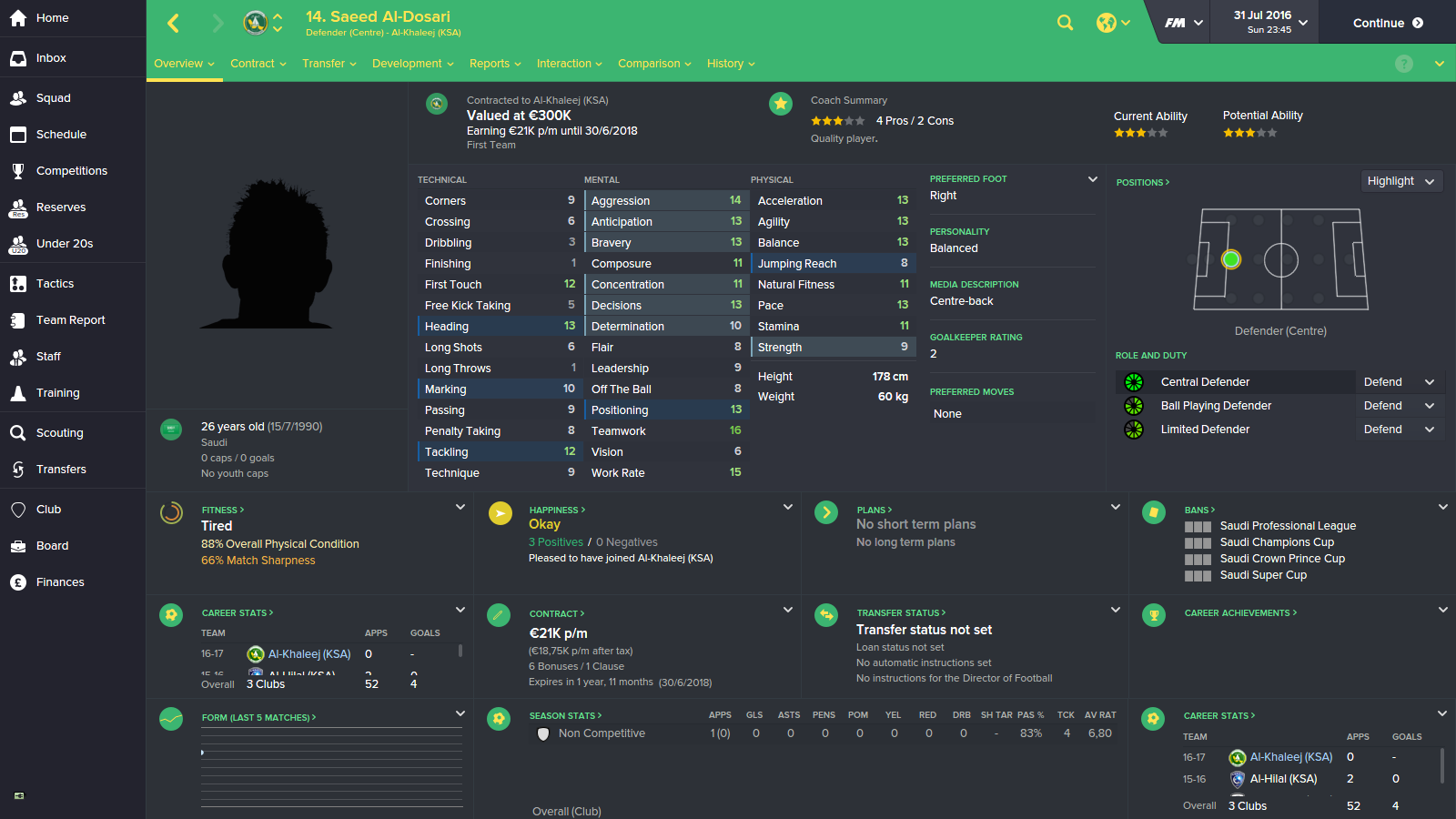 Decent defender coming for a small fee of 200k. 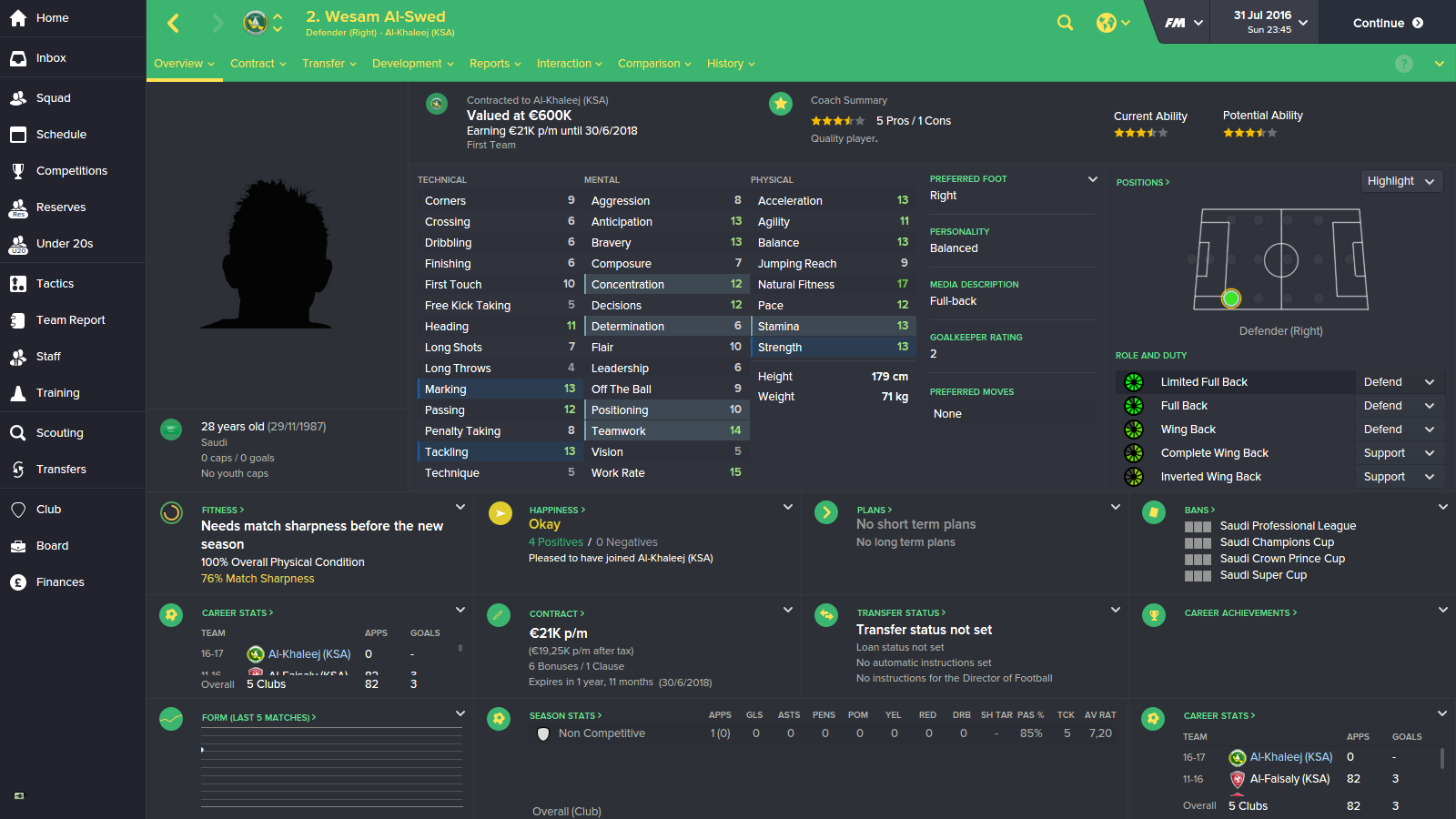 Had a great season last year averaging a 7.3 in the competition at Al-Faisaly. I think 750k isn't a bad deal and i hope he will do a good job for us as well.

I'm very happy with the result against FC Heerenveen, who finished 3rd in the eredivisie last year.
The result against Faisaly was just to start of the season with a win and what i hoped for worked even after we got behind 1-0
Login to Quote

As you can see we where the underdogs, which is to expected. But the odds were way more in the favor then at the start of my career here which is already great.

The game itself started really amazing for us a lot of chances in the first 25 minutes. Then things went downhill fast. Al-Nassr started putting us under pressure which resulted in a 1-0 after 40 minutes. Things went even worse just before half-time when Al-Nassr scored their second of the evening. Starting the second half just like every game with a lot of chances we got one back in the 51st minute,. Keeping a lot of pressure on Al-Nassr and going all out attack in the last 20 minutes. Unfotunately it was to little, to late and we lost the game 2-1. 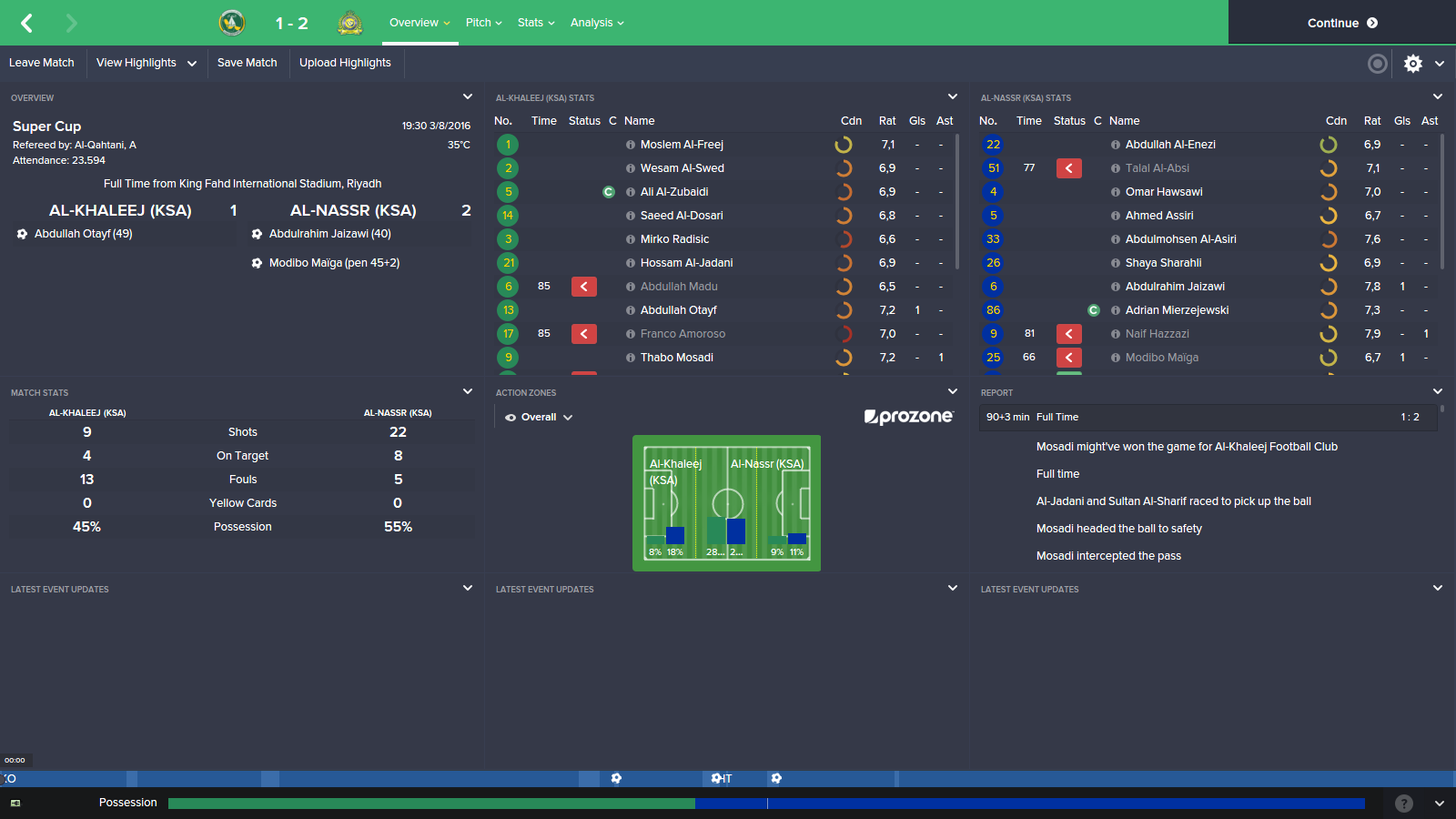 Managers Opinion:
"It was already an achievement we got here. Ofcourse i would've loved to be able to lift the cup,but things won't always go your way. I'm still proud of the boys and i'm hoping that we can achieve this kind of succes in the competition."
Login to Quote

mgriffin2012
4 years
Unfortunate to lose the Super Cup but hopefully it shouldn't have too much bearing on your form going into the league season!
Login to Quote

Justice
4 years
Unlucky to lose, but these experiences will help your team grow!
Login to Quote

We started off really poor with a loss on penaly against Al-Diriyah, who play in the secondd ivision. We were the better side, but they put in great defensive work.

We started off the season with a tough away fixture against Najran. The game was boring and didn't deserve a winner really. Good point, but a very poor performance.

Another away game against Al-Wehda. We dominated the first half, getting a very fast first goal, but even with all the chances we weren't able to get a second. The second half was dominated by Al-Wehda getting that equalizer early on. Al-Wehda pushed for a winner, but thet failed as well.

Our first home game was against the suprise of last season Al-Qadisiyah. We managed to keep our streak going against them. We deserved a win but a late 1-1 rescued a point for AL-Qadisiyah.

After 3 draws we needed to get a win and we were able to get that away against Al-Hilal. Al-Hilal was not therselves and we managed to get the win in the 89th minute.

A replay of the Super Cup game was up next. This time at home. After the great result against Al-Hilal we wanted to keep it going. We didn't change anything in our starting eleven and it worked. It was, for me, a suprising victory against Al-Nassr.

Another very tough game, this time against Al-Ahli. Al-Ahli were the better side, but got helped when Al-Dosari got a red card inside 2 minutes. It still took Al-Ahli quite a long time until their first goal. They got a penalty, which i thought was undeserved. We tried breaking Al-Ahli's defence but failing at it. Al-Ahli got the 2-0 after some poor defending 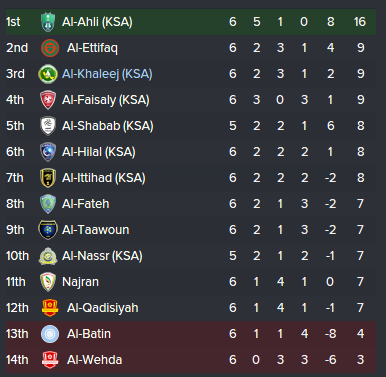 Marko was able to start the season great. Getting 3 assists from leftback and some great defending helped him getting the spot
Login to Quote

After the loss against Al-Ahli we needed to bounce back with a win against Al-Ettifaq who were doing really well, finding themselves 2nd just above us. We did what we needed to do with a 2-0 victory.

After the important match against Al-Ettifaq we played away against Al-Taawoun.We went 1-0 down after 2 minutes but got a goal back 3 minutes later. We managed to get the 1-2, which was the 2nd gal os Amoroso as well. After the 1-2 Al-Taawon dominated the rest of the game. Their work paid off as they got the 2-2 late in the game.

Al-Fateh are struggling in the bottom half in the competition and we proved to be strong at home. This game looked as it could not go wrong. But Al-Fateh were stronger then us for the complete game but some world-class saves from our goalkeeper kept us in the game. The first goal was scored in the 57th minute by our striker Marwan Hussein. They game was still dominated by AL-Fateh, but after a quick counter we managed to make it 2-0. Not even one minute later we managed to score the 3-0. Just before the end of the game Al-Fateh got a goal, but it was too late.

After the victory against Al-Fateh we had a very important match against Al-Faisaly. I didn't think we would win against them very easily. But 3 goals in 6 minutes gave us an early 3-0 lead. Al-Faisaly tried to get back into the game, got a 3-1, but not much later the gap was 3 goals again.

After 2 home games we played Al-Shabab. Al-Shabab are a strong side and were doing well at home. We didn't look to great so far away from home, but we wanted to change that. In a very boring game it was 4 minutes of action, the first 4. Al-Shabab scoring after only 2 minutes and Madu managed to make his first goal for the club in the 4th minute. Al-Shabab tried afterwards, but was not able to get a victor.

Another very important game, this time at home against Al-Ittihad. We did something we have done a lot and got us a lot of goals, scoring in the opening 10 minutes. We managed to do this once again. Al-Ittihad were for the rest of the game way better, but not abel to equalize.

Najran found themselves midtable, while we were still strong in the top 3. Najran were very weak and we didn't have any trouble to break them down. Scoring 3 in the first 30 minutes was already enough, but we kept trying to score more. We were able to grab 2 more goals in the 2nd half and that's how the game ended.

Al-Batin, who were promoted last year were down in the last place. And we needed to break this curse of ot being able to win. A great attack got as, yet again, a very early goal. Al-Batin got back really quick with a goal and that's how the game ended, a very poor result in a game we should've won. 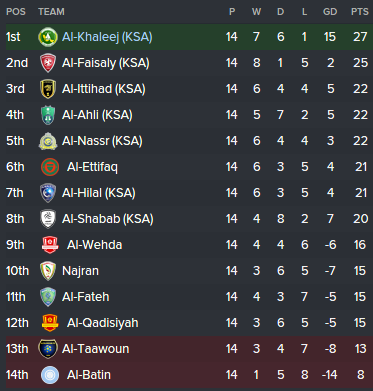 Some insane form had gotten us up to 1st, hopefully we will keep this and maybe we will win the league.

Marwan Hussein finally got some form. The main reason we were able to win most games thanks to him. Scoring 7 in 8 and also getting 3 assists is great, while not even playing some games.


Managers Opinions:
"Some great results in the past months, but the fact we weren't able to win away from home is worrying. We looked great at home and managed to score a second goal way more, which we didn't to well before. I'm very pleased with the results, but not with the one against Al-Batin."
Login to Quote

Balik
4 years
A great undefeated month once again! Marwan Hussein is working wonders for ya!
Login to Quote

ScottT
4 years
Great start to the season for you.
Login to Quote

mgriffin2012
4 years
Great start to the season mate, keep it up!

Justice
4 years
A superb set of results. Hopefully you can build on your lead at the top of the table!
Login to Quote

We needed a better rightwing to play in the Champions League Campaign. Al-Faraj will be that player. Great player and a nice pickup for only 1 million.

We needed a better backup midfielder and 23-year-old Al-Rashoodi will be that player. Good young Saudi payer already with some potential to him as well. Won't be a starter all games, but great for rotation.

With 2 of our strikers retiring at the end of the season, Mosadi our left-winger being injured and underperforming we needed a player on the left and as striker. Saudi-International Al-Abed will be great on both of these position. Coming in for only 725k from Pojang we managed to find a stel who will hopefully help us getting the title.

Teams we got drawn against:
Al-Ain:One of the stronger teams in the group. Al-Ain got 3 championships in the last 5 years and got 2nd last season in UAE.
Al-Jaish: Al-Jaish is one of the topteams in Qatar, but wasn't able to win the title in the last few years, losing out Lekhwiya most of the time.
Malavan:Malavan was able to pull a big upset, winning the league in Iran last year, while being a mid-tabel team for the last 10 years. This year Malavan find themselves close to the religation.

Managers Opinion:
"I think we have the ability to qualify for the next round, it will be tough but as long we play like we play all the time we will be able to get a place in the next rounds."
Login to Quote

mgriffin2012
4 years
Looks like an interesting draw mate, dont know if its a tough one or not but sure you're capable of coming through it!
Login to Quote

ScottT
4 years
Al-Ain will be a challenge in that group for sure.
Login to Quote

Justice
4 years
Playing against Al-Ain is certainly an exciting prospect, good luck in that group!
Login to Quote

You are reading "Aleksandar Zimmerman: World-beater".