It was another sad, sad day for Chelsea Football Club supporters, Roman Abramovich has sacked Antonio Conte just days before the start of the 2016/17 season, without even playing a competitive match.

The fans had high hopes for the Italian after he joined following Italy’s strong showing at Euro 2016. The disappointment from the Blues supporters is just another disastrous mark on the reign of the Abramovich era at Stamford Bridge.

Some fans have seen enough, some had seen enough a long time ago. The Blues fans have always been a passionate bunch, aren’t weren’t willing to sit around and do nothing. So, following in the footsteps of AFC Wimbledon and FC United of Manchester, a new club has been born.

A group of Chelsea supporters have put their hands in their pockets and formed AFC Blues, they’ll be looking for permission from the Football Association to be granted league status, in an attempt to re-write their own history of the football club.

Alan Wakes, the chief executive of AFC Blues had this to say:

“We want to start fresh, give the fans a new lease of life. The club hit an all-time low after the sacking of Antonio Conte, but this has been coming for years. Roman has brought the club everything and more, but he’s tarnishing the reputation along the way. Some of us just can’t bare it anymore.”

Wakes, 52, admitted he needed no convincing when the initial ideas were put forward to him from a group of fellow season ticket holders.

“I couldn’t turn it down. I’ve always wanted to be involved in a football club, in one way or another, so this is a dream come true. Hopefully we’ll be successful, who knows. But we want to do things the right way, with the right investment. This club will have a good name and a good reputation. That’s our first target."

Following a succession of meetings with the FA, it looks likely that the Blues will be granted league status, but in what league is yet to be seen. The club is expected to play it’s football at the 250 capacity stadium, Fulham Street Corner, located around five miles away from Stamford Brigde.
Login to Quote

BeanyUnited
5 years
Going to be a fun story this!
Login to Quote

Tallery
5 years
Good luck, will be following!
Login to Quote


AFC Blues have been granted league status and will join the Spartan South Midlands Premier Division with immediate effect.

It has been a lengthy process, but the FA were keen to include the Chelsea breakaway club, but could only place them down in the Spartan South Midlands league, where they will face the likes of Biggleswade United and London Tigers.

They’re set to replace Hertford Town in the division, who have failed to repay loans, and have been forced to liquidate as a result of their financial crisis.

The Blues have yet to announce their new manager for the coming season, but Alan Wakes revealed that all will become clear in the coming days.

“First and foremost, I’m delighted that the club is now up and running with league status granted. I didn’t really care where we started, just that we got there! We’re hoping to announce our first manager in the coming days, we’re putting together the finer details.”

Chelsea supporters will not be so fearful about the potential of AFC Blues with them placed seven leagues below the Premier League on the football league pyramid, but will be sure to keep a watchful eye on the rise of their now noisy neighbours.
Login to Quote

Tallery
5 years
Wooo - I'm looking forward to seeing how you do!
Login to Quote

Thanks Beany!
Login to Quote

The club released a statement on Twitter following their successful application for league status.

Ashcroft, 27, a life-long Chelsea fan retired from football early due to recurring knee injuries. He spent time on trial at Charlton in his youth career before moving around non-league sides.

His career consisted of spells at Aldershot, Braintree, Southport and AFC Rushden & Diamonds.

The former left-back has little to no managerial experience and admits he could be in over his head after AFC Blues formed as a fan-owned club.

“I was surprised when I got the call from Alan, I really was excepting it. I have been hoping to forge a career in coaching, but I wasn’t looking to cross that bridge so soon, I’ll admit. It’ll take some time to adjust, that’s for sure.

“However, Alan explained what the club was all about and how they plan to build and build, right the way to the very top. I feel as if I can achieve something here and help a good group of guys build a fan base. The club wants to do things the right way, and that’s appealing to me.”


It’s been reported that being a Chelsea fan was merely the icing on the cake for the AFC board members, who whittled their candidates down to two possibilities, a quick phone call was all it took to convince Ashcroft to take the plunge.
Login to Quote

Tallery
5 years
He should be alright, I guess


Spartan South Midlands side, AFC Blues have unveiled their first official home and away kit, as well as their very own badge ahead of their first season as a football club.

The kits are somewhat similar to that of Chelsea Football Club, after the owners, who are supporters of Chelsea broke away and formed the club. The owners have kept with tradition by having a blue home kit and white away kit. The slight difference, that supporters of the Premier League side wouldn’t have seen before, is the white and blue stripes that run diagonally through the shirt, a smart addition. The kits are both sponsored by Umbro, with the club keen to avoid matching the sponsors of the Premier League side. 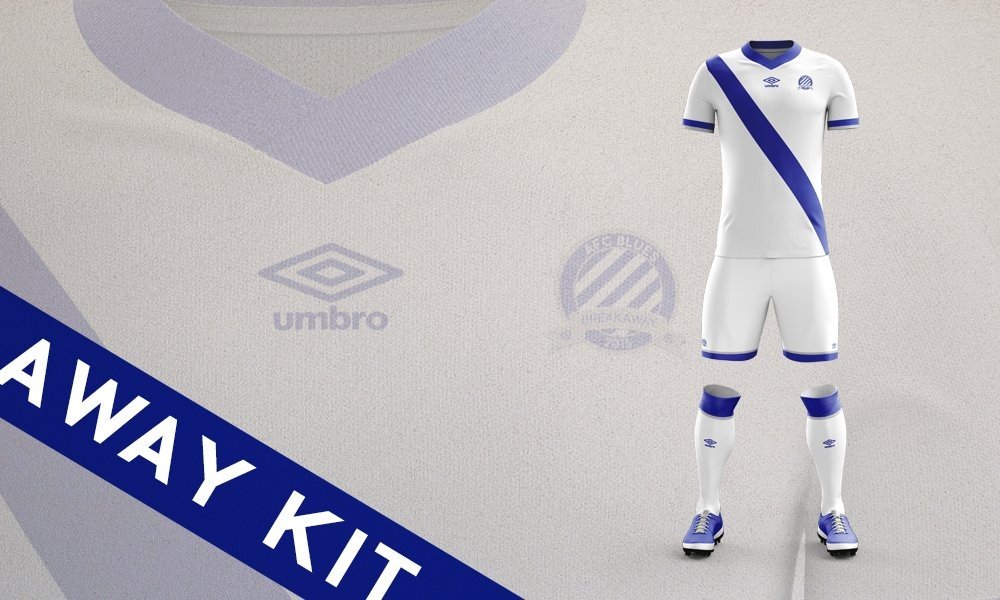 (A massive thanks to Tallery for the amazing job on the kits and badge. I’ve installed the badge in-game, but might have done it wrong so bare with me on that. Never the less, it’s in there!)
Login to Quote

AFC Blues: Ones to watch


AFC Blues manager, Luke Ashcroft has wasted no time in fine-tuning his squad as he targets instant success at Fulham St.Corner.

After holding open trials at the club, the squad slowly built itself up and the club handed out contracts where they see fit.

They’ve handed a contract to those who they felt most deserved it based on their trials and those to fully emerged themselves into the spirit of the club.

Ones to watch, Bradley Fraser, Sam Wilson and Craig Lewington. A central defender, attacking midfielder and wide man respectively, were the standout talents at the trials.

Ashcroft was pleased to announce that three had joined the club, despite interest from other league clubs higher in the footballing pyramid.

The club are expected to announce several new signings in the coming days after spending days scouting potential signings, with the club hoping to lure players from the Vanarama National League.
Login to Quote

Tallery
5 years
Those some beautiful kits, wonder who made them

You are reading "AFC Blues - The New Boys in West London".