Could have been better or worse, so far I don't complain

That's more like it. Good game overall, and deserved win. I hope we can build on this result.

My first touch with domestic cup football, proved to be a pleasant one.Even though the game went to shootout in dramatic fashion, our reserve keeper was the hero, saving two and sending us into the next round.

Dominated the game from start to finish, could and should have scored more, but let's not be greedy. Vital points, as we start building our season onto the right foundations.

Two quick goals in 60 seconds decided the game in our favour. Porsan-Clemente and Bostock make the life even better.

Aaand, the good run is over.Thankfully, it was a cup tie, but all of the reserve players were dreadful. Instead of pushing for a first team place, they tied themselves for the bench.

Before the next game, I finally got the other missing piece in the puzzle. A left back from Spain, hopefully he will help us be even more solid. 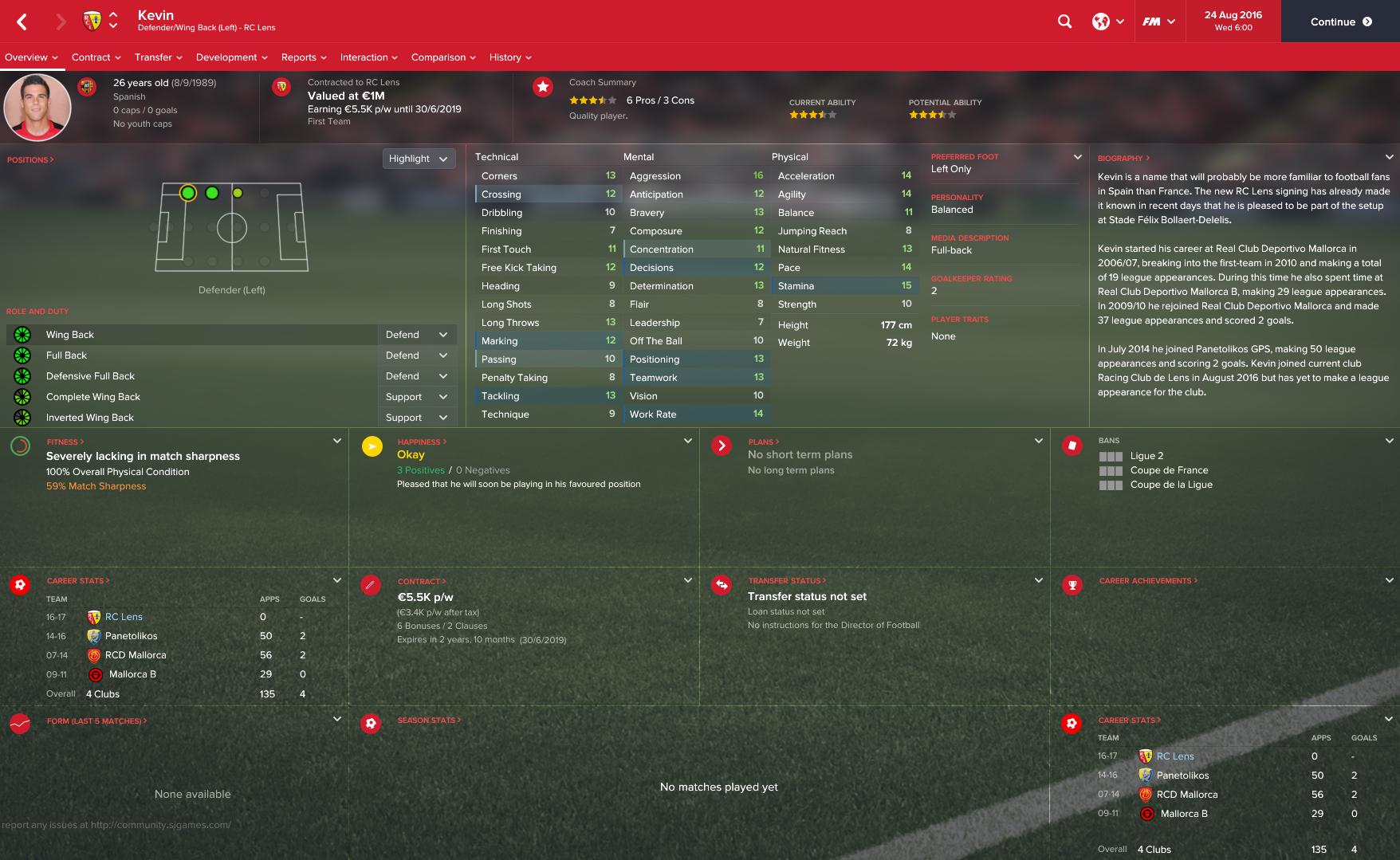 He didn't. Not exactly a debut to remember. He wasn't the one to blame for any of the goals, but the team overall performance was terrible. The first half was boring, but still even. Whatever happened in the second-I have no decent explanation for it.

I think Bostock may just have saved us from spiraling down the table. A vital goal and important three points, to keep us on course for promotion.

The last day of the transfer window was busy for us, which wasn't really the plan. Bursaspor knocked on the door, asking for the services of our right back, Loick Landre. At first I refused the deal, but he demanded to move, for the sake of winning trophies. I prefer not to have moaning players in my team. 700k euro later and he is on his way. Having to deal quick, we jumped on a transfer listed player from one of our promotion rivals. Only for 130k, here is our new defender: 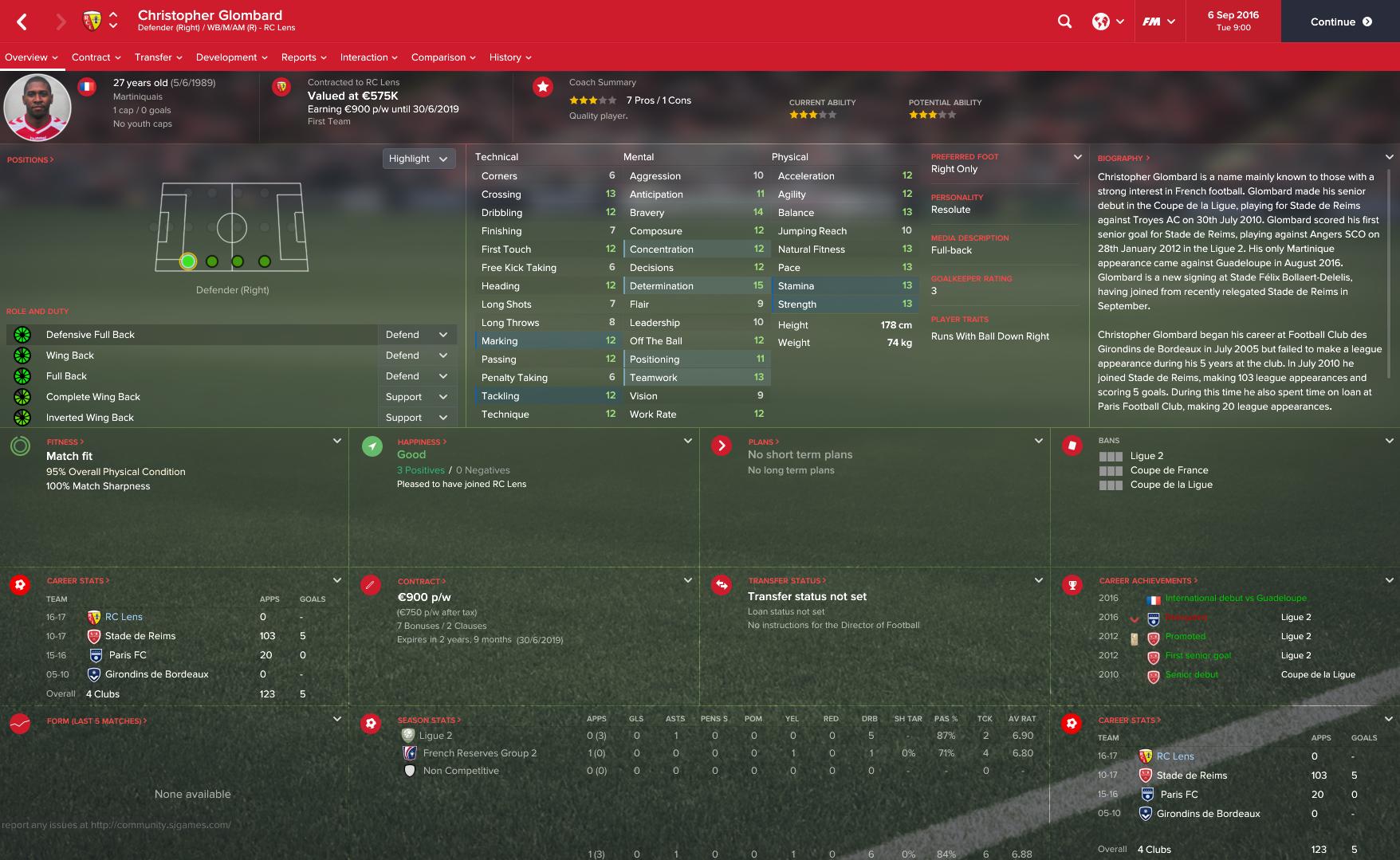 At the end of the month, here is how we stand:

Seems like there will be 4-5 teams fighting for those two sweet places, which guarantee the promotion. I hope we can step up in September, and get some points on the board, to be further ahead of these behind us.
Login to Quote

mgriffin2012
3 years
Barring that one result a great month! Lens could be in for an entertaining ride this year!
Login to Quote

ScottT
3 years
That result against Amiens

beside that, a solid month for sure.
Login to Quote

@mrgriffin2012 @ScotttT yea, we can call it "that one result" and never mention it again, ok?

September kicks in with a visit to an injury plagued Ajacio team. Even though we are considered favorites, it takes some piece of magic from the usual suspect-Bostock and the super-sub Christian to turn the game around.

Another day-another comeback. This time with surprising heroes-the defensive midfielder N'Daw and the central defender Cvitanovic open their scoring accounts for the club, giving us a vital win.

No drama this time around. The home team was one of the main relegation candidates, but they manage to stay somewhat safe, thanks to the league top scorer, who plays for them. We kept him at bay, and that's enough to win the game.

Just two days later, we face a team in real trouble. Stade Brestois are out of the drop zone, only because of their superior goal difference. And instead of pilling on their misery, we gifted them the three points. Worst of all-the late goal comes from former RC Lens player. Thank you, Coeff.

The last game of the month is a visit to the league leaders. And boy, was it a battle? Nine yellows, one red card, twelve shots on target, and-of course- a goalless draw. Still, in the general picture, this is considered a good result.

We end the month in the same position, on which we started, only with better distance between us and the fourth place. So far-so good. I still hope for direct promotion though, the playoff is a risky thing.
Login to Quote

Atoobie
3 years
decent form there, 3 wins, 1 loss and a draw. Nicking a win against the leaders would have been good though. Great stuff man
Login to Quote

First of all, sorry for the lack of updates, real life hit me a bit, hopefully everything will go smooth in the future.

@Atobie: yea, was gonna be a good win, but they simply seem unstopable at the moment.

And it started with probably our best game so far. I was expecting another battle, instead it was one way traffic, from start to finish. The goals should have been more, and came late, but I am not going to complain about a win, am I?

And it follows with a disappointment. A man will think, that leading 0:3 will be enough to seal a win, against mid-table side, but alas. The guys fell asleep after the third goal, and all the touchline yelling in the world couldn't wake them up.

Tricky game, from which we managed to emerge victorious. Two subs in the 61th minute changed the even game, as they started and finished good attack, which lead to the winning goal.

Seems like nothing really changes in this league. Win some, lose some, third place and 4-5 lead ahead of the hungry wolves behind is a constant. Still, it's early stages, anything may happen, but it looks like we are going to be in the mix for promotion, and that is all I want.
Login to Quote

Atoobie
3 years
great stuff as per, expecting you to get up buddy
Login to Quote

mgriffin2012
3 years
Really taking to this league mate, keep it up!
Login to Quote

@Atoobie, thanks mate, doing my best

A visit to the highest scoring team in the league is next in our calendar. We split the control of each half, they dominated the first and we the second. At the end, a piece of Lens-taka, finished by Bostock, gave us the three points.

We opened our Coup de France campaign with a visit to minnows Pont du Chateau. A nice chance for some fringe players and youngsters to impress, and they didn't fail. Comfortable win, and on to the next round we are.

The studying pays off. And I start the next course at the end of the month.

It's a derby day. Not as big as the one versus Lille, but still, the fans want a win in this one too. And we managed to deliver. Harder than expected, but enough to send us on top of the table for the time being.

Alas, not for long. Nothing much can be said about this game, we dropped 2 points and that's pretty much everything. Dull one, from start to finish.

Three days later, a heavily changed squad takes on relegation candidates Clermont. Even though it was not the most convincing win, the job is done.

Back on top. Solid November gives me hope for the months to come. Almost at the half mark of the season, we are on the best place possible.
Login to Quote

mgriffin2012
3 years
A lot of points secured and only one goal conceded, things are looking up!
Login to Quote

@mgriffin2012 ye, the defense is solid, but I still lack goals, hoping to improve that

Less than a month from our visit here in the league, this time the Cup brings us to the coastal Havre. And the hosts took their revenge. Just when I was whining that a replay game will just confuse our schedule, a minute from time we conceded a heartbraking goal.

Another step towards the promotion is made. We controlled the game and almost at the half time mark, a precise free kick from our left back Kevin gave us the three points.

Last competitive game of the year is also the first of the second fixtures rotation. Unfortunately, we were without Bostock and that proved costly. Goalless draw, a dull end of the year.

Still, we are holding the lead and got some distance ahead of the third placed team. Even better is the margin with the fourth, which makes me confident that we will reach at least the playoffs.
Login to Quote

@mgriffin2012 I have some ideas for the squad next season, but first things first 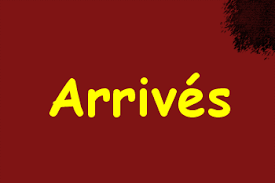 Two new signings in our pursuit of greatness.......or at least promotion. 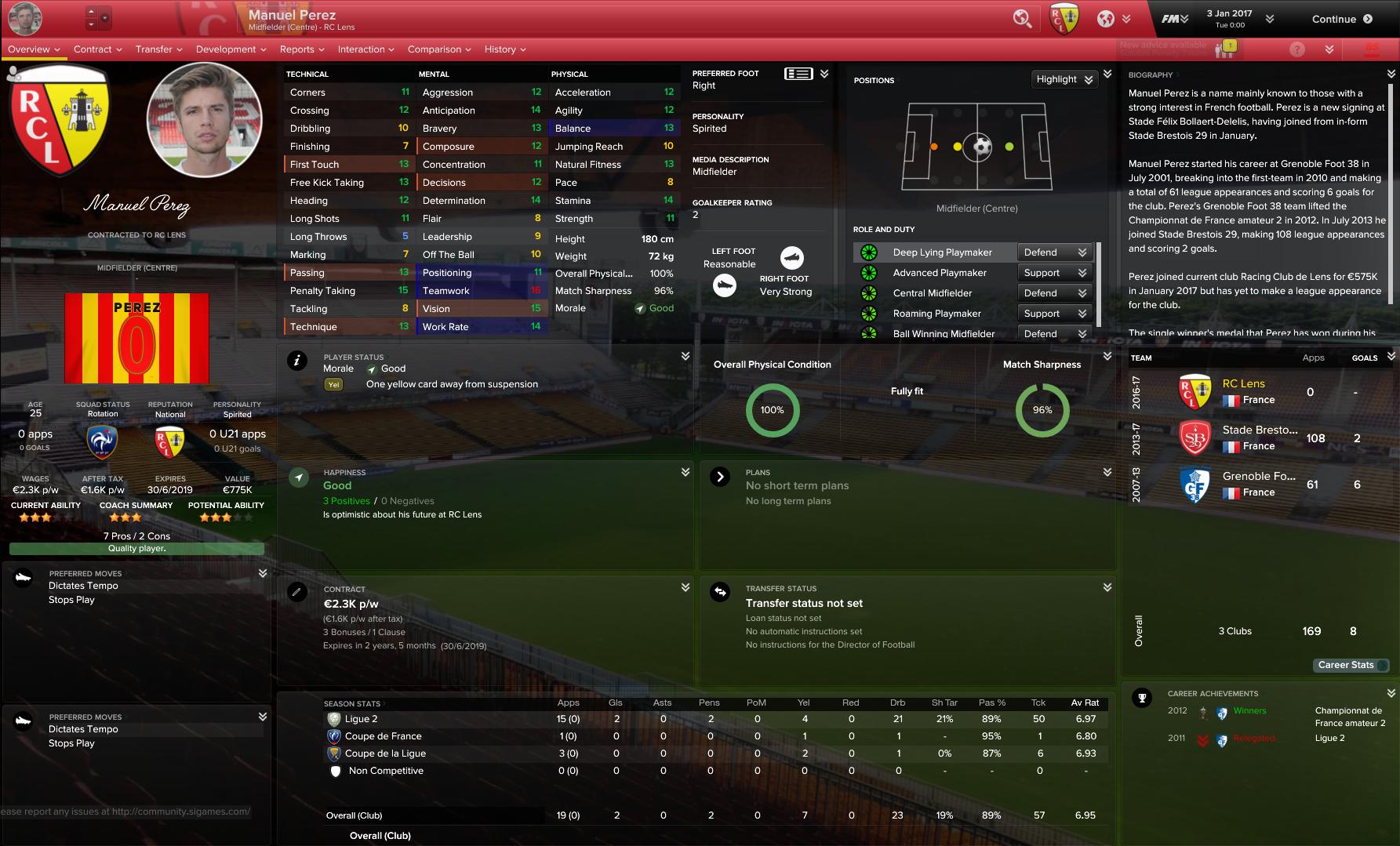 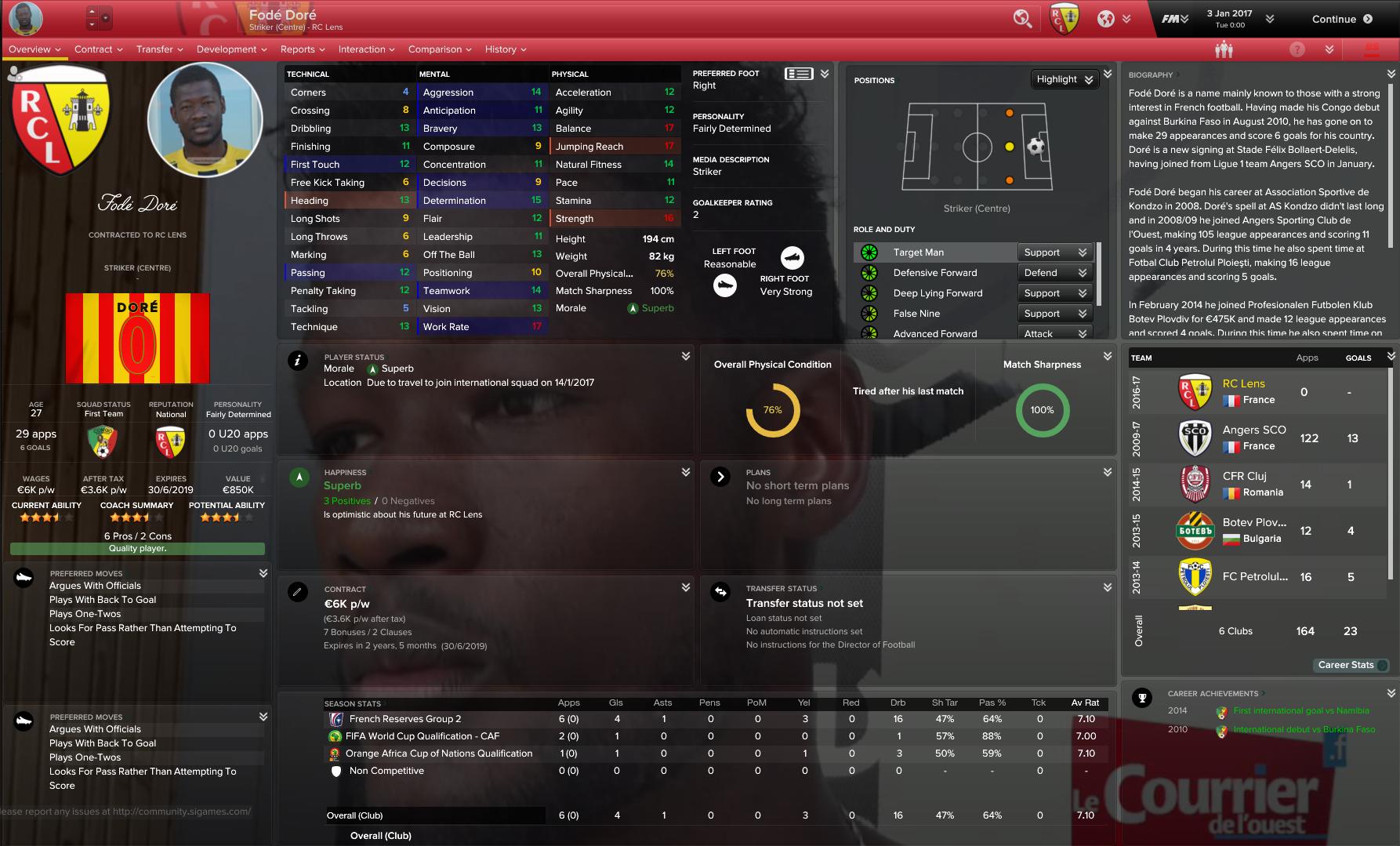 Enhancing the central midfield and the attack, in attempt to score more goals than we already do.

Another solid performance of the defense and not so much of the attack. 23 shots resulted in just one goal, of the new signing Dore. Still this proved to be enough. The bad news? He is going to ACN with his country.

Next in line is a team within deep trouble. It seemed a nice chance for the fringe players to come and impress. But instead of winning comfortably, after we took the lead, we just blew out two points.

A time for little revenge. Or not. We seemed helpless, after they scored from corner. Chaotic pressure, but nothing really dangerous in front of their goal. Instead of taking six points from two struggling opponents, we are left with just one, and bad form looming on the horizon.

Thankfully, everyone around us is losing some points as well, so the top spot is still ours. Even though, February needs to be much better, if we want to improve our promotion chances.
Login to Quote

mgriffin2012
3 years
Some good signings mate, hopefully they can help you extend that lead to more than 4 points!
Login to Quote

@mgriffin2012 to be fair, I will be happy with the second place too

Last time out, the Troyes game put an end to our bad streak. The story repeats itself, with the hero this time being Kevin Fortune, who scored magnificent 4 goals.

Coming as fourth in the league, Ajacio were looking to strengthen their promotion chances. They fought bravely, but the second goal broke them and after that it was all about closing the game.

A bad game on all fronts. We woke up and entered the game in the 80th minute but it was nowhere near enough to salvage something from the match. At least Kevin has more free kick goals than Cristiano Ronaldo now.

We returned to the clean sheets and one goal wins against Bourg-Peronas. Nicely executed volley from Chevaller at the hour mark was enough to keep us on the right track.

The season is nearing it's end and we are still on the top spot. Next month awaits and we have very important games against Sochaux and Strasbourg. I'll be happy to win at least one of them, but will see how the things are going to be.
Login to Quote