ninjaskill
3 years
Retirement hadn’t gone how Alex thought it would. Standing in the rain in Stockholm he was starting intently down the pitch with hope. The stadium was quiet as everyone watched as Jetro Willems stroked the ball into the bottom corner of the goal. Alex sank down for a second before getting up to shake the hand of his opposing manager and then went to try and pick his team up from a penalty shoot out loss in the Europa League final.

They had hardly been in the game suntil a lucky late equaliser to get them to penalties, it actually made the defeat harder to take than it would have been had they not scored. Brugge stayed out on the pitch for a few minutes before they were able to take their runner up medals and then head back to the locker room.

Alex knew that the team would be feeling very low after the loss and tried to pick them back up a bit. “If you offered us runner up in this before the season started we would have taken it I think I’m right in saying, we should all be proud of how this season has gone. It took the champions of Italy penalties to beat us. AC Milan, Liverpool, Lyon, and Roma all went out to us, they are all huge teams and they all failed to beat us. We made the final against all the odds and we may have lost it but, you should all be proud of what you achieved in the game and in the games to get here.”

The team were still down as they boarded a flight back to Brussels. Alex got a text calling him to meeting of the board almost as soon as he could get to the training ground and could guess what it was about.

Due to bad traffic Alex was late which wasn’t a great impression to make. Bart Verhaeghe, the President of Club Brugge stood up after Alex sat down and starting reading from a sheet. “The board feels that the direction you have taken the team is not where we want it to be and as a result of this for the future of the club we feel it is in it’s best interests to terminate your employment effective immediately. The remaining year of you contract will be paid to you on a monthly basis unless you find employment managing another team.”

Alex was stunned, he had guessed it might be coming as the board seemed to be moving against him for some reason but, he was surprised at how simply it was done. With his piece seemingly said Bart led the rest of the board out the room leaving Alex alone.

After a couple of minutes he figured he may as well pack his stuff up. He had very little in his office that was his and was quickly through with that. As the players had already left for their summer break Alex just texted them tell them of the news and wish them well.

Alex had planned for a staff meeting to plan for the pre-season so went to that to tell his backroom staff the news and thank them for all the help they had given him over the course of the job.

With that Alex walked to his car and felt his phone buzz. An update from a football app showed that news of his to quote the press release “No longer being manager of Club Brugge” had been confirmed to the media.

Alex drove for home, he had expected this to happen and as a result had interviewed for a number of jobs so that he would have something to fall back on. He heard his phone ring and was unsurprised by the caller, Graeme his agent.

“Two offers for you, just pick and I will negotiate and get everything signed.”

“Give me some time to think Graeme I’ve only just lost my job. I have to talk thing over at home as well.” Alex said, he had two good offers and it was hard to decide between them.

Graeme cut off his thoughts “Call me within three days so that everything can be done before I head off to St Vincent for a nice rest.”

Alex was about to respond but, his agent had hung up on him. “Neuker” Alex muttered under is breath as he turned off the motorway.
1

ZakNikFMP
3 years
Amazing and interesting...cant wait for you to start

C.J.Lippo
3 years
Pumped to see this continue man, good luck where ever you end up!

ScottT
3 years
Great start to this man, should be a long and brilliant story!
Login to Quote

ninjaskill
3 years
Thanks, for all the responses guys. Hopefully you keep enjoying
Login to Quote

ninjaskill
3 years
A couple of weeks later and Alex flew in ahead of the rest of his family to get ready for his first day on the job. He had already been to the practice ground/stadium to see everything and sign all the deals so tomorrow was a press conference meetings and today he had to move into the house he had found when he was last in the area.

As a player Alex knew things changed quickly and you could be suddenly moving, however it seemed to happen more as a manager so he decided to rent somewhere this time instead of buying and had found a very nice house for a decent price. With the usual German efficiency his flight landed on time and he was picked up by a club employee and driven to his new house.

It was different to how he remembered but, the same place. It was in Rodenkirchen close to the Rhine river and just south of Cologne, and most importantly for Alex it was around half an hour to get to work. Someone from the club who Alex would have to thank had overseen the movers getting everything in so Alex just had to unpack. He decided to leave that for later though and went out to get some food. 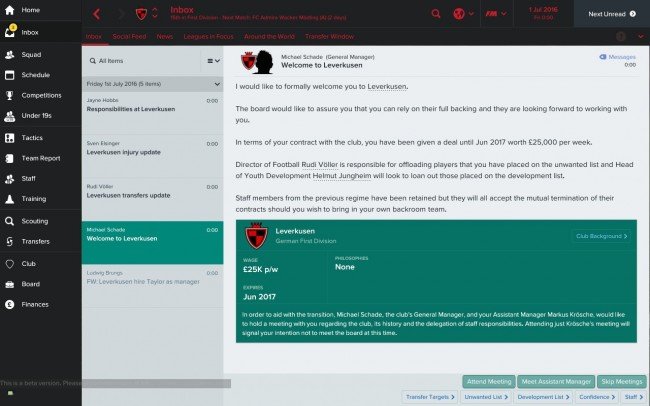 Alex woke up bright and early, well overcast and early and headed in for his first days work as the manager of Bayer Leverkusen. He arrived at the practice field and was able to find his parking spot quicker than he had expected, he made up for that extra time by getting lost on the way to his office. After getting directions from a cleaner to his office Alex was able to get their just before the director of football, one Rudi Voller.

The German football legend had been at the interview for the job and had played a big part in Alex choosing Leverkusen over Everton who had also offered him a job. He wasn’t just a big name their he had done some good work securing Alex some preliminary targets he wanted him to get. Kevin Volland, Julian Baumgartlinger and Aleksander Dragovic were the big targets Alex wanted and had got while Danny Da Costa, Ramazan Ozcan and Jonas Meffert were all smaller signings Voller had wanted and given they all cost less than €500k so Alex was happy to allow them. Voller led the way to a meeting with the board, Alex’s first since he was appointed and his goal was made simple to him the team was desperate to win another trophy, especially the league for the first time, as they wanted to vanquish the memory of all the near misses on silverware. He was expected to lead the team back into the Champions League for next year and have a good cup run. In the Champions League he had to just keep the team competitive. As he had spent quite a lot already Alex didn’t have much money left but, felt that the squad was quite good and he might just keep what little money he had left until the winter window.

Alex had a short break before he was due to meet with his staff to discuss training plans, transfer targets and youngsters who he should look to.
Login to Quote

mgriffin2012
3 years
Leverkusen will be a cool choice man and hopefully you can do great things in the Bundesliga!
Login to Quote

C.J.Lippo
3 years
Definitely an interesting club with some good young talent, Alex should do well me thinks!
Login to Quote

Also in the interest of full disclosure I had to restart the save, I hadn't gone past the first day so no progress was lost. I got very drunk last night and decided that it would make the story a lot easier if I got rid of everyone with a hard to spell name so sold quite a few players who I want to keep
1
Login to Quote

You are reading "The retirement of Alex Taylor Part 2".