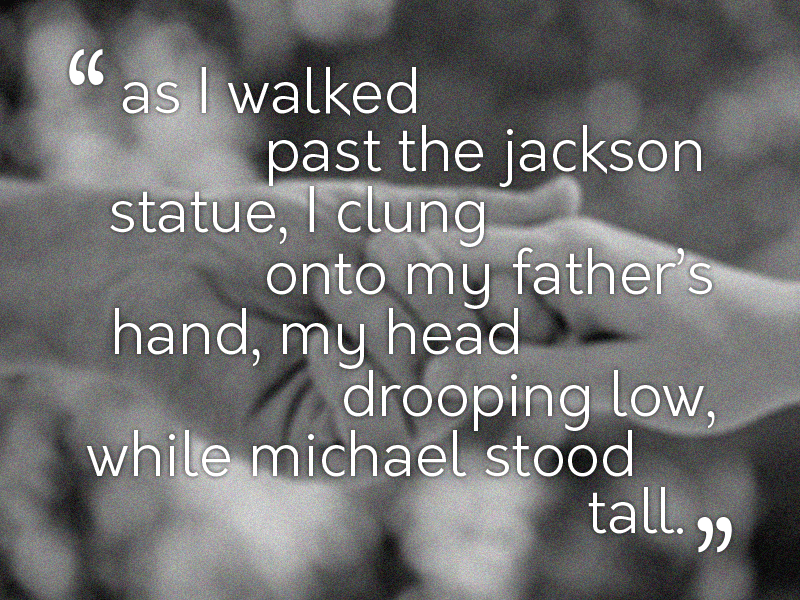 One single tear ran down the side of my face, as if time stood still. Inside, I was more distraught than the single tear that slowly slid down my cheek displayed to the crowds that I solemnly walked through. Today had been the day that was supposed to be my day. The whole family had travelled – my mum from Australia. My grandparents had made the arduous trip from the north of Scotland just to see this moment. The moment that was supposed to be the beginning. But, it was the end.

Contract renewal day was always a day of emotion. Many boys fiercely competed for the precious spots on the next level; the challenge each year greater as the quality grew as my fellow teammates and competitors grew in height, stature and ego.

I was just hoping I wouldn’t see any of my friends – I was too old to be seen gripping my father’s hands like I was about to be washed away by a wave. But, today was an exception. I was meant to have the limelight; Mr. Jennings were to tell me that I was staying on. But he didn’t.

“I’m sorry, David”, he sympathetically said as I broke down and hid into my mother’s lap. “We just can’t keep you on.”

My mother just let me sob before she pulled me up and consoled me as we left the room. We left the stadium, dad and I walked in front with the rest of the family tailing behind, watching on. As I walked past the Jackson statue, I clung onto my father’s hand, my head drooping low, while Michael stood tall, basking in and representing all the success my club had had in the past.

And it was my aspiration to play a part of that success on the pitch. Run the flanks, play that final cross that would get the winning goal to win us a trophy – as I had done so many times at youth level. But at senior level it was not meant to be.

My father was telling me to keep my head up, as he was sure there would be other opportunities. As a younger player; I had many chances to move to some of the world’s biggest clubs. The likes of Manchester United, Celtic, Arsenal and Chelsea had all tried to persuade me to leave my club. But each time, my interest was not even drawn – the spending power; the facilities – they had not turned my head once – I wanted to make it at my club. The club I had grown up supporting and playing for. Football is a brutal sport. 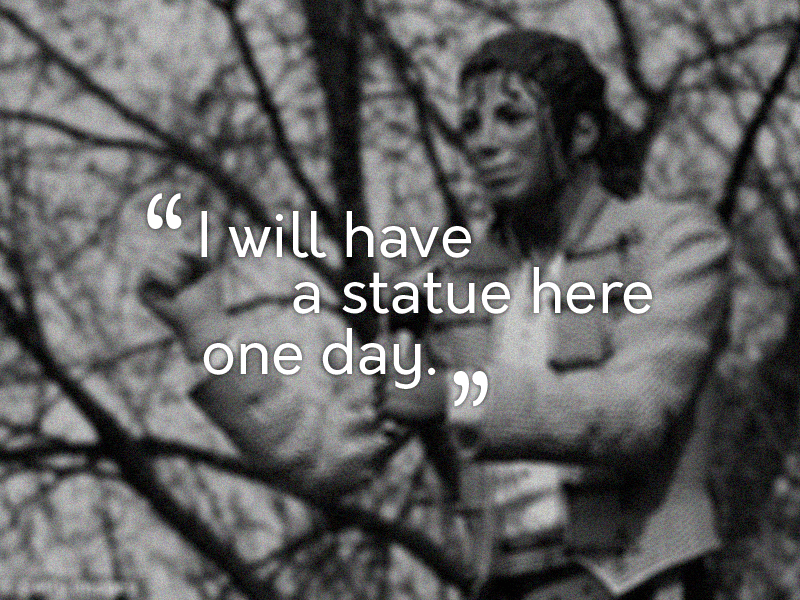 And telling my friends was also certainly going to be brutal. Some will be supportive; like my best mate Jake – he has always been there for me; he will understand my situation. We met in the under-eights team and had remained friends ever since. Unfortunately, the club let him go very early on – but he’s been in the same situation as me, which is reassuring. However, others won’t be so kind. They will taunt me, tell me I’m not good enough – even though they can’t kick a ball to save their lives. But do you know what I will tell them?

“I will have a statue here one day.”
Login to Quote

MJK46
4 years
Amazing start man. It will be awesome to have your guy next to Michael lol
Login to Quote

Hellsdoom
4 years
Looking good (even though I don't like Fulham :P), good luck with this

Atoobie
4 years
OOOOOOH THIS EXCITES ME MUCHLY
Login to Quote

ScottT
4 years
It's a Tallery story, of course this is going to be good.Best of luck mate.
Login to Quote 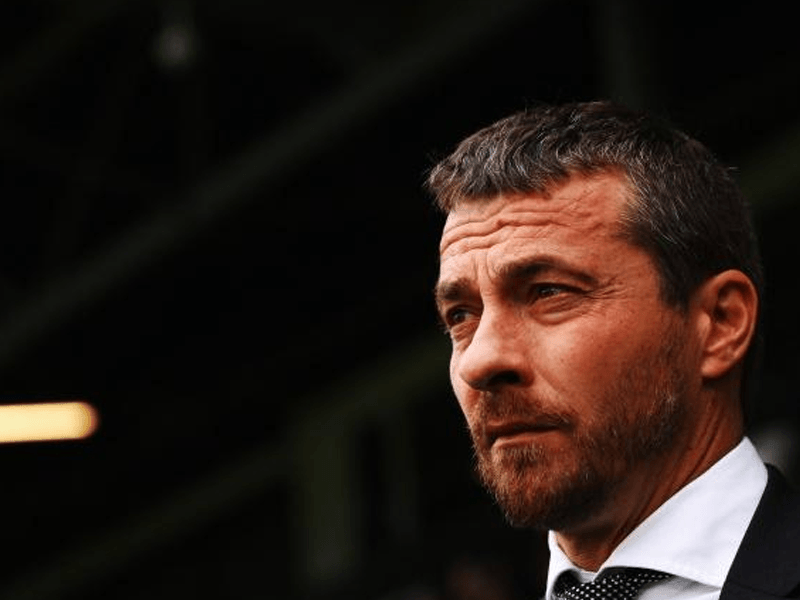 Club Statement:Fulham Football Club has today agreed to the departure of Slaviša Jokanović as Head Coach. We would like to thank Slaviša for all of the work he has done for the club since joining last December, and wish him well on his future endeavours.


Jokanović joined the Cottagers following the dismissal of Kit Symons after a poor start to the Championship season, and managed to steer them to a 20th place finish, avoid relegation, but this seems to be one of the reasons for his sacking, according to some reports. Others suggest that a spat with owner Shahid Khan over the club’s transfer movement and the sale of promising midfielder Emerson Hyndman was the cause of the dismissal.

The fourty-eight-year-old began his career as a player, making his debut for his hometown club Novi Sad in 1986, where he stayed for two years, making thirty-five appearances and scoring five times before making the move to professional football with Vojvodina.

He stayed with the Tulips (Lale in Serbian) for two years, making fifty-four appearances and netting ten times; and helping the club win its second national title in the 1988–89 season. These impressive performances caught the attention of Serbia’s big boy, FK Partizan, who he signed for in the summer of 1990. He spent three years in Belgrade, making sixty-one appearances and scoring ten times – with the latter part of his time with the club being the most fruitful. In his second year he helped the side win the domestic cup and, in his third, he scored an impressive 13 league goals (a career best), being one of several players to net in double digits – the team scored 103 in 36 games – en route to the league conquest.

His spell at Tenerife lasted four years – the longest he stayed at one club for his career, and made 123 league appearances and netted 17 times for the Los Chicharreros, becoming a fan favourite and helping them cement their place in Spain’s top flight.

He left the Canarian club in 1999, moving to Deportivo. He stayed for a season, and along with Brazilians Donato and Mauro Silva in midfield, he helped the club win their first and only ever La Liga title – in which he made twenty-three appearances and scored twice before moving to Chelsea in 2000.

His spell with the Blues lasted two years – making thirty-nine Premier League appearances before being released in 2002. He subsequently moved to Ciudad de Murcia, where he stayed for six months before hanging up his boots in 2004.

In terms of his international career, he represented Yugoslavia sixty-four times, scoring ten times in eleven years. He represented his country at the 1998 World Cup in France, and Euro 2000 in Belgium and the Netherlands. 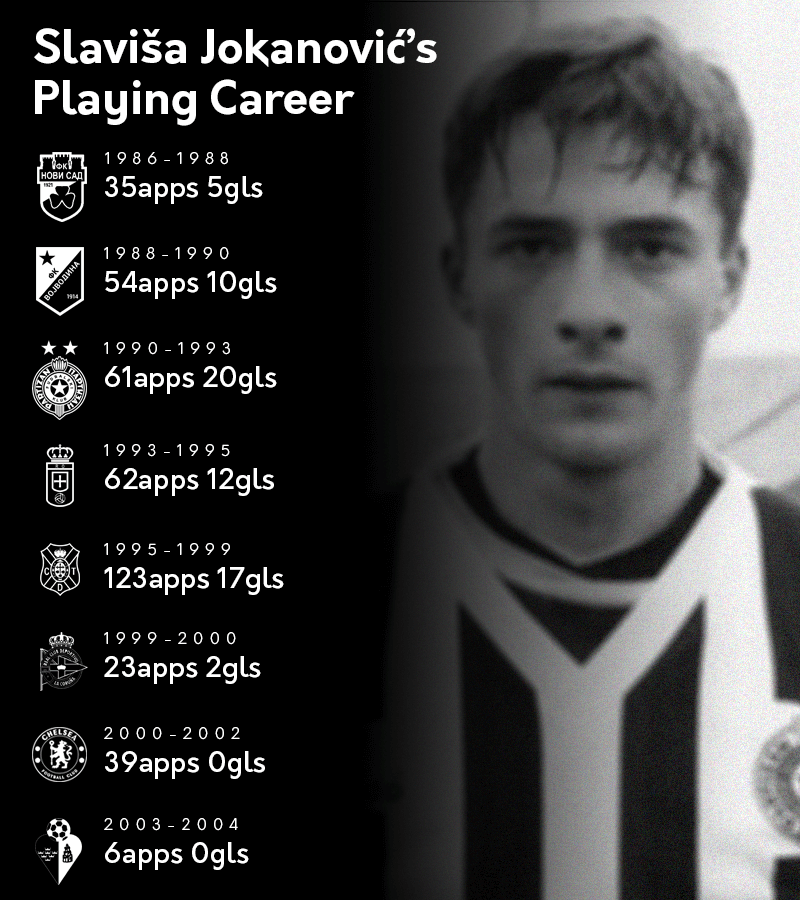 After retiring, Jokanović decided to move into management; taking his first job with Partizan. He won the domestic double in both his seasons in charge, becoming the first coach in the club's history to successfully defend the accolades; on 5 September 2009, however, he left the post by mutual consent, bidding farewell through an open letter.

His next job came three years later in 2012, joining Thai side Muangthong United F.C. In his first and only season, he led the team to the third Thai Premier League title in their history, going undefeated in the process.

On 5 May 2014, Spain's Hércules CF confirmed Jokanović as coach until the end of the season, replacing Quique Hernández who had been sacked with the team in last place in the Segunda División table. He only managed one win in his five games in charge, in an eventual relegation.

In October 2014, Jokanović was appointed on a short term contract at the helm of English Championship side Watford, their fourth coach in five weeks. Under his leadership, the Hornets were promoted to the Premier League with one game to spare, sealing it with a 2–0 win at Brighton & Hove Albion on 25 April 2015 for their 15th win in 20 games; the team was also minutes away from winning the league title in the final match, but conceded an injury-time equaliser to Sheffield Wednesday that allowed Bournemouth to overtake them. After failing to agree a new deal, he left the club and was replaced Quique Sánchez Flores in June 2015.

In June 2015, Jokanović was appointed as coach of Maccabi Tel Aviv FC. On 25 August, he led the club to the group stage of the UEFA Champions League for the first time in 11 years, after ousting FC Basel on the away goals rule.

Jokanović lasted just over six months in the role before he elected to return to the Championship, joining Fulham on 27 December 2015, but was relieved of his duties today. 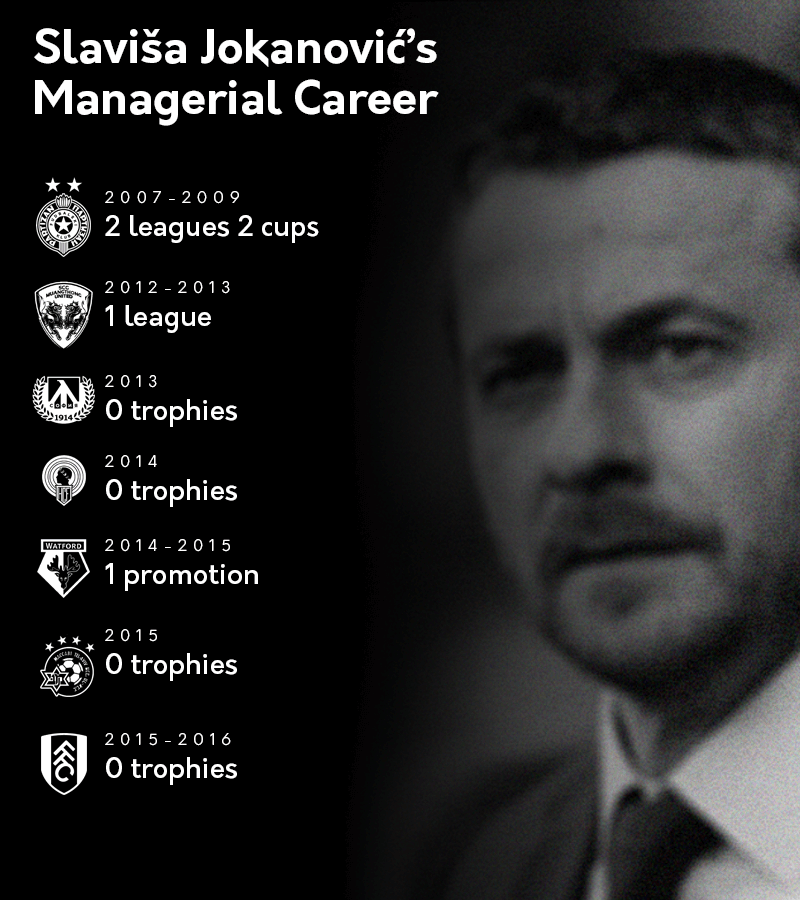 Speculation of who will replace Jokanović at the helm of Fulham is rife, with the likes of Harry Redknapp, Nigel Adkins and James Beattie being linked to the job.

Upon leaving Craven Cottage, Jokanović told the press that he was ‘happy to be leaving’.

mgriffin2012
4 years
Just a little dig at the owner...
Login to Quote

I support Levski Sofia and I confirm this.

Jack
4 years
Cracking stuff so far and we're only a few updates in. I always look forward to reading your stories mate, pure entertainment

You are reading "Craven For Glory".