Portsmouth Football club was established in 1898 and the team play at Fratton Park.

Portsmouth FC is one of the best supported clubs outside of the Premier League, with an average match day attendance of more than 16,000 and season ticket holder numbers exceeding 11,000. Portsmouth FC has some of the most passionate fans in the land.

Pompey prides itself in being the biggest community-owned football club in the country, following a successful buy-out led by the Pompey Supporters Trust in April 2013.

ZakNikFMP
5 years
I love this club...I hope this will be long career.
Login to Quote

@JohnWarrington - Thanks bud!
Login to Quote

mgriffin2012
5 years
Really hope you can take this club back to the top mate!
Login to Quote

Former Wales international striker Craig Bellamy has been announced as the new manager of Portsmouth Football Club for the 16/17 season.

Very much a pilgrim of the Premier League, Bellamy was the first player to score in the league for seven clubs. With 455 appearances and 135 goals to his name, he is a household name in the United Kingdom.

At the age of 37, Bellamy has been out of the game for two years, where he has been studying to receive his coaching license after finishing his career at boyhood club Cardiff City.

Now, he has taken the reigns at a club that were once successful, but have shared the same fate as so many and dropped into the lowest ebbs of professional football in England. In his introductory press conference, he spoke about Portsmouth's downfall.

"I remember one year, the side were sitting on the top of the Premier League and they'd just beaten Manchester United."

"To see how far they've fallen since then is gutting, and the pain the fans have been through is heartbreaking. To see how many people still turn up to the games though, that is what shows what kind of a club this is."

Atoobie
5 years
Bellamy + Portsmouth = Up the pompey!!
Login to Quote

mgriffin2012
5 years
Craig Bellamy could be a great appointment for Pompey!
Login to Quote

ScottT
5 years
Really hate the fans but I have to admit, Pompey are a club that are in a league far too small for them (also hurts me to say) so I hope you can get them back up the leagues. Bellamy as manager is another thing I like, class man.
Login to Quote

JohnWarrington
5 years
Bellamy is a very interesting appointment! Thanks for letting us have Tollitt for the season 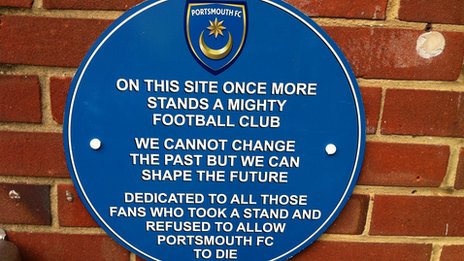 Portsmouth began their 16/17 season in a mixed way after a very unimpressive pre-season.

Manager Craig Bellamy was however, largely impressed with the side throughout the month.

"I believe I saw some great, promising stuff and I can't wait to get deeper into the season."

"We'll be there, or there about when the final day comes."

Atoobie
5 years
There or there abouts

mgriffin2012
5 years
A mixed month but the signs are there that things are moving in the right direction!
Login to Quote

After what was a largely unimpressive start to the season, Portsmouth seem to have changed their fortunes and have remained unbeaten in September.

New signing Jamar Loza was on fire throughout the month, creating plenty of discussion via twitter surrounding his form.

@LloydButler - Loza was good, but not THAT good. Come on now. #Loza #Pompey #PompeyvsWycmbe

@DomSp8 - That was quite special from Loza! #Loza #Pompey #PompeyvsWycmbe

You are reading "Portsmouth F.C | Renaissance".