Jack
3 years
Atoobie: Shh, keep it on the down low

So this was it, the largest meeting yet. I arranged to meet five new people who were my prospective new backroom staff if they accepted their roles. I wanted to get everything organised very early in a quick manner so I didn’t have to sort all of this out at the last minute.

Around the table at my house I had Lukas Koch, a 36 year old lad from Germany who I wanted to hire as the club’s graphic designer. Koch would be the man to design our club badge and sort out the official club website as well as social media graphics. He had studied art graphics in Italy. Secondly, there was my prospective new media manager called Jacopo Udinesi who was in control of promoting the club and creating hype around it to attract new supporters from around the globe and he was to work alongside Koch in the designing as well.

Moving onto actual backroom staff and people who will be sat on the bench alongside the manager (to be decided) on matchdays, I look to hire Sara Silvestre who is a 30 year old woman who I want as the club’s main physiotherapist at the moment. She has a great knowledge of injuries having worked at other sports clubs around the country.

And most importantly, I look to hire three new directors to help me with the day-to-day behind the scenes running of the club. For that I have two old friends I know through business going by the names of Mattia Colombo and Leo Vecoli. On top of that there is an Englishman called Liam Yeowart who has led several large business operations in his home country and surprisingly applied for a role here as Managing Director.

“Well, I hope you’re all comfortable and enjoying the fancy wine I have bought you all for tonight and thank you all for your contributions towards tonight as well!” I began, hushing the conversation from the rest of the room in doing so.

“It is very good Mr. Moretti!” exclaimed Lukas Koch, who I had a feeling was beginning to feel a little bit disorientated with the drink he was taking on board.

“I’m glad, and I’m sure you all read the emails I sent out to you all regarding the purpose of this meeting?” I asked.

“Yes,” the room replied in unison.

“And you are all aware of your roles I am offering?” I asked, preparing the documents that offered everybody their contracts at the club, including their weekly salary and potential bonuses.

The room nodded in agreement this time. “Leo, Mattia and Liam,” I started, “I need to have a word with you once everything has been sorted with the contracts. Are you all OK to stay behind for a bit?”

“OK, good. Right, I suppose that I should hand out the contracts that I have prepared for you. I’m sorry for the lack of presentation, but I obviously don’t have a graphics designer on my hands just yet!” I smiled towards Lukas Koch as he took another sip of his wine.

The sounds of paper scraping against each other, fingers tapping on the table and pens scribbling on the dotted line took over the current silence in the room. “All done?” I asked, breaking the vocal silence.

“Err... Yes!” Vecoli said, “All done, boss” he continued with a short wink towards me.

“Great, well I think most of our business has been done. Thank you all for being so cooperative tonight, it has really taken a lot of stress off from my shoulders! Here’s to a great future with Vatican F.C.!” I exclaimed, raising my glass – an act which everyone else in the room repeated back to me.

On the way out there were plenty of handshakes between everybody who had been recruited today. Vecoli, Colombo and Yeowart all stayed behind as expected for my chat. About Andrés Moreno.

“Right gentlemen,” I started as the door slammed shut. “Since you are all directors of this club now, I have one big question for you all to start your roles. I say a question; it’s more of a vote.

“Shortly after this club’s start-up, I was offered a very generous amount of money for another man to join us in the boardroom. However, this individual is... How do I put this...? Fairly controversial, to put it lightly. His sector of business is a lot, lot different to any businesses you will have been involved in.”

“Who is it, boss?” asked Leo Vecoli, a 55 year old Rome-based businessman.

“Yes. I told him that I have a lot to do at the moment and that I wouldn’t accept him into the board of directors just yet. However, he did offer us $800million for every $2billion he would launder into the football club. I don’t know how you feel about this, which is why I am giving this decision up to a vote. Whoever has the majority means he is either in or out of this club... So?” I opened up the question.

After a short, stunned silence it was Liam Yeowart – by far the most conservative out of all the board members, including myself – with a ‘no’ vote for Moreno. However, at almost the same time as each other, Colombo and Vecoli agreed to let him in. This put the decision in my hands.

“I say yes.” I said, leaving Yeowart in a 3/1 position in the vote which meant that Andrés Moreno would be called up and offered a position in the boardroom, courtesy of $800million per $2billion he laundered through Vatican F.C..
Login to Quote

mgriffin2012
3 years
Everything seems to be moving in the right direction man! Plenty of hard work being put in in the background!
Login to Quote

Atoobie
3 years
Can't believe you're letting the dirty money in, that might come back to bite you

PatrickLFC
3 years
Definitely set up for a massive fall at some point, should be interesting - another scandal in the church! Good luck!
Login to Quote

Jack
3 years
mgriffin2012: Maybe too much into the right direction

Atoobie: It was just too good to refuse mate!

patrickLFC: Hmmm, maybe so mate, I'm looking forward to it myself

C.J.Lippo: Very risky, but it is a very good risk if it pays off!
Login to Quote 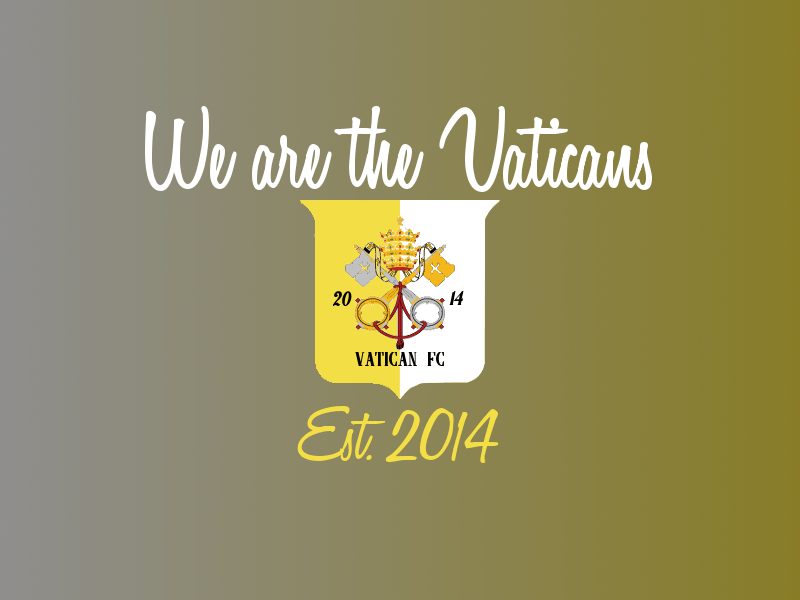 Thanks to recent employments in the media department of the club, German graphic designer Lukas Koch and media manager Jacopo Udinesi have been able to create a new club identity for the club formed just a couple of months ago.

The badge includes many telling symbols that it is a club in the Vatican City. It depicts two colours, the yellow on the left and the white on the right. Overlaying both of the colours are the crossed Keys of Saint Peter, often called ‘The Keys of Heaven’ in some Christian countries and denominations. The badge also has the name ‘Vatican FC’ written below the Keys of St. Peter, as well as ‘2014’ written on both sides of the crossed keys to denote when the club was founded.

Niccolo Moretti on the new badge:
“I think that the new club crest is beautiful and really captures what my expectation of it was to be. Lukas [Koch] and Jacopo [Udinesi] have done a really fantastic job on this and I would be delighted if this is the badge that all of our success happens under!”


This badge was unveiled on the club’s new official Twitter, Facebook and website along with the graphic shown above this article. The page wrote ‘We are the Vaticans’ which implies that that will be their nickname as they head into the 2016/17 season.

With work clearly being done behind the scenes at the club, Moretti has yet to make more publicised decisions about Vatican F.C. The unveiling of the badge has been the first big news in weeks after the website and social media pages were launched. However, the club is reportedly moving in on Virtus Bergamo’s star midfielder in Daniele Ortolano due to the 21 year olds friendship with the club president Niccolo Moretti.

mgriffin2012
3 years
Really great start to this story and a really cool emblem mate! On to a winner already with this story i think!
Login to Quote

MJK46
3 years • Edited
Amazing start and I love the club idea. Just one question, did you get the Popes blessing and backing?? He totally needs to be part of the board.
Login to Quote

“Well, Piero I have been very busy with the organisation of the club over recent months after we received the green light for the club,” said Niccolo Moretti. “I signed up these men on the board not too long ago and now it is time for us to sign up our new manager – we chose you, Mr. Icardi.”

Piero Icardi had never managed a football club beyond amateur level; the semi-professional landscape of Vatican F.C. was a new arena for the 35 year old.

“I’m absolutely delighted at the offer, gentlemen. My question is: Why me?” Icardi asked Moretti and his surrounding board members – D’Angelo, Yeowart, Moreno, Colombo and Vecoli.

“We want you because we have seen you with your current team locally. Your passion, determination and motivational skills really hit home with some of the board members including myself,” said Leo Vecoli who was sat next to Andrés Moreno in the seating arrangement.

“I second that, Leo.” agreed Liam Yeowart. Yeowart’s approval influenced a lot of the board members in convincing fellow board members that Icardi was the man to hold the role of Vatican F.C.’s first ever manager.

The offer included the opportunity for Icardi to select all of his own members of staff from his assistant manager to the physiotherapists to help him settle in. The job handed the manager a weekly wage of £775 which the board felt was very generous for the fourth tier of Italian football at a club that hasn’t played its first season of competitive football yet.

Niccolo Moretti had also already agreed deals for three transfers to occur before preseason next year. Daniele Ortolano, a midfielder from Virtus Bergamo, Fabio Bresci, an amateur goalkeeper and Walter Collazo, a clinical striker from the amateur leagues in Rome.

On top of that, Andrés Moreno had promised to pull a few ‘surprise’ players in the coming months to join the Serie D side before the new campaign kicks into gear next June.

“I have looked over the contract you have offered, and even though my mind wasn’t in any doubt beforehand I am even more convinced to take on the role you have offered. I will be Vatican F.C.’s first ever football manager.”

And with that, the meeting concluded. The result? Attivà Calcistica Vaticani’s first ever football manager.
Login to Quote

mgriffin2012
3 years
Seems a good appointment man, sure he'll be able to push the club forward!
Login to Quote

You are reading "Holding The Keys To Heaven".