The final 6 games of the season. It is make or break time for the squad. Everyone is ready, I am ready, the fans are ready. It’s GAME ON!

First up we have Sheffield united, and what a game it was to
4-2 winners!

Then a draw to 3rd place Peterborough 1-1 left me a bit nail biting still!

Another spanking at home fellow playoff chasing Charlton 4-2 Left us in a great positon still in 5th but the teams below us were only 2 points and 4 points behind us respectively! 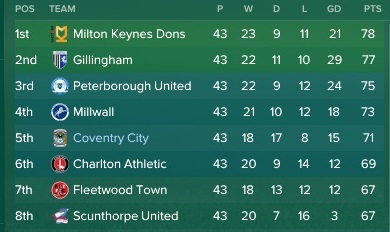 Then came along Rochdale… YES a 2-1 win 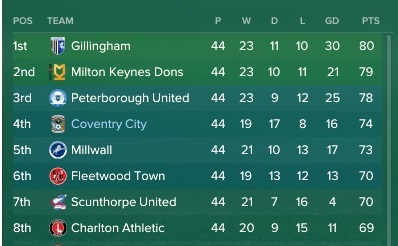 Were now in 4th place and hopefully one of the 4 places is ours! 2 games to go. I need 1 win from two games to be certain and mid table Walsall was the one but last game! and Scunthorpe being the final game of the season.

Up till this point this month as been a blinder! considering we were playing 3 of the big teams around us who were also fighting for a playoff place. e.g Charlton, Peterborough, Scunthtorpe I am really happy with the final push they have been making. Now bring it home lads!
Login to Quote

One but last game! we need a win to make sure we are in the playoffs

we draw
1-1 with Walsall

with one game left that leaves the standings at

YES YES YES! We have made the playoffs with a guarantee of at least finishing 5th and a possible high of 4th!

Either way we did it and are playing either Millwall, Fleetwood or Scunthorpe. With Scunthorpe being our last game I knew it would be difficult and maybe resting a few players would be a good idea to keep them fresh for the thick and fast playoff games?

What a run of form we are in, and just when I need it as well.

Away from home to a promotion chasing side, tight game right? Wrong. ripped apart 1-5 crushing any chance Scunny had of making the top 6.

So here is the final table

In the end we were only 4 points away from 2nd place and only 6 points away 1st place. It was definitely tight up there, but all EFL leagues seem to be tighter than the likes of premier league.

mgriffin2012
4 years
Getting into the PLay Offs is a great achievement mate! Hopefully you can come out of your semi on top!
1
Login to Quote

So here we are. The first game of the playoffs and its an away leg first. Garcia has just gotten injured in training with a Hernia so that is a major blow for my forward line, so lets hope Jones can pull out a performance and step up to his chance in these next two games!

Was a really close game. We came out 1-2 winners, as you can see they were lucky to get a goal in 90+ but we have 2 away goals meaning they need to score 2 to win so it leaves us in the driving seat 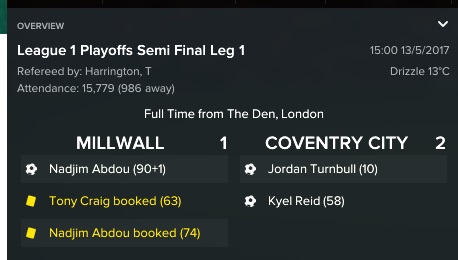 Second leg at home….nail biting all game, but as the clock ticked on the more and more hopeful I got that we were going to scrape through.

In the other game between Peterborough and Fleetwood their first leg finished 1-1 so that tie was still all to play for. I would obviously prefer Fleetwood as they finished lower down the table and Borough were more of a challenge in my eyes if we managed to get to the final.

The second leg between those two came first and it was a thrilling game and to my surprise Fleetwood came out 3-1 victors. Stage one was complete from my perspective so I needed to just fulfil my end of the bargain and get the team into the Final to face them!

There you have it. A playoff final at Wembley for Coventry vs Fleetwood for a place in the Championship. What an end to the season, what a journey. One last game to end it all, one last game to achieve what seemed impossible
Login to Quote

I am just going to go ahead and say it…

I would say that it seems more flattering than it really is to be honest, We did batter them with more shots 12-20 but we just failed to hit the target enough with only 7, compared to their 6.

We had a pretty average performance really and I was lucky that our CB’s in Willis and Turnball had a 9 and a 8.1 rating and chipping in with the two winning goals

Bigirimana in CM getting 8.8 and assisting in both of those goals! 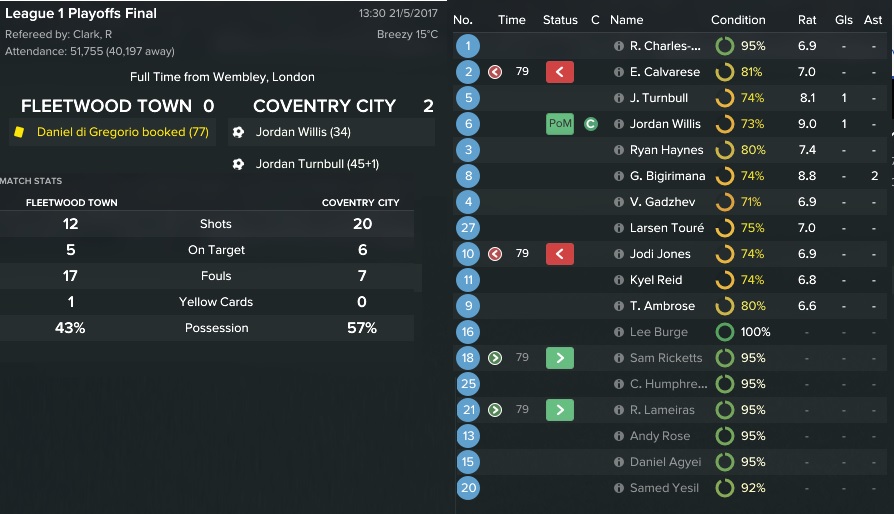 I can’t believe we got into the final and even won it. It is going to be a struggle staying up in the Championship, it really is a step up. I just hope that I get enough transfer money to be able to get some free transfers or going out of contract players in because lets face it. It is better spent there than trying to buy anyone, unless I manage to sell some players first.

Here is a quick view on the awards for the season 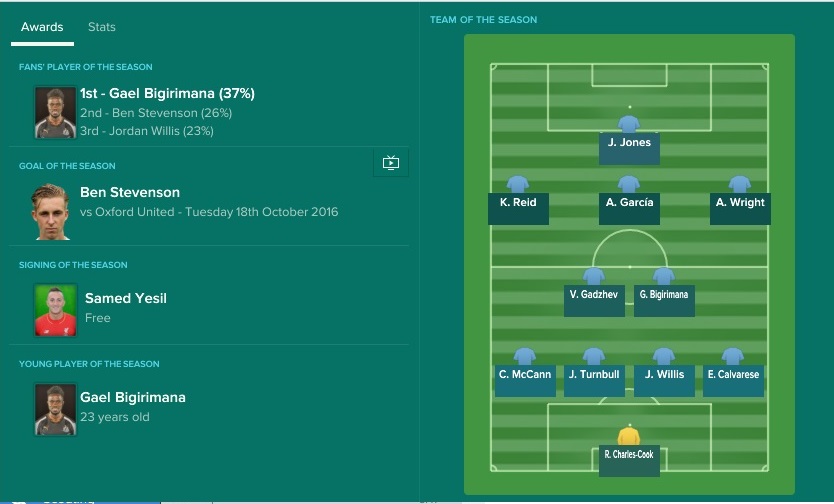 Not surprised Bigi won this. He played 44 of the 46 league games, 4 goals, 11 assists and 2 man of the match rewards with a 7.06 rating. Without him in the middle of the park, along with Gadzhev don’t forget I don’t think we would have managed.

Our strength was the middle as it was our strongest area of the pitch. He also bagged himself young player of the season as well!

One last thing. Before the start of the new season we were intalks hopefully! I wont keep my hopes up however.

Until next time. And the start of our adventure in the Championship
Login to Quote

Atoobie
4 years
Just caught up! Great job getting promoted man, I love that you signed Carlton Cole, I've got his signature
1
Login to Quote

T8
4 years
Thank you to all who decided to read this and follow what happened. Thank you to all who replied and left a message or two on how it has been going I am greatful that you all took the time to follow me or not on this journey! But it's not over yet!!

I normally cut my episodes in monthly sections, though The start of this one will be slightly different as alot went on. Firstly part 1 will just focus on post season and start of season goings on.

As stated at the end of last season we were looking at a possible takeover. Was I hopeful? not really this is Coventry for gods sake! The owners wont sell unless they get stupid money and if I get up the leagues they likely still wont sell as I will be making them money. Catch 22 much?

This as I suspected fell through at the very start of the season just before pre-season so I wasnt to fussed.

We were given 1M pounds to spend in the transfer market which I was surprised at, and to be honest I wasnt planning on buying anybody unless I really left I had to.

I was going to rely on free and out of contract players to bring in for a suitible amount of money.

The signing on fees, the agent fees, slight wage distribution changes will soon take up that money and I will be left with nothing. However If I can try and sell
Sordell, Cole, Tabb (wanted to leave due to not keeping my promises of upping the coaching staff, not my fault the board keep saying noooooooooo) and hopefully selling Rose, then it may give me a little bit of money to possibly buy someone if the right player at the right price comes up...... hmmmmm this may take awhile.!!!
Login to Quote

15 players. Yes 15 were brought in during the August transfer window. I scrolled through the squad and looked at areas I needed to strengthen on in order to hopefully stay in the championship and avoid relegation. I also went back to my scouting from before when I trailed through loads of nations for like 2 hours and tried to snap up a few people I could as well if possible. 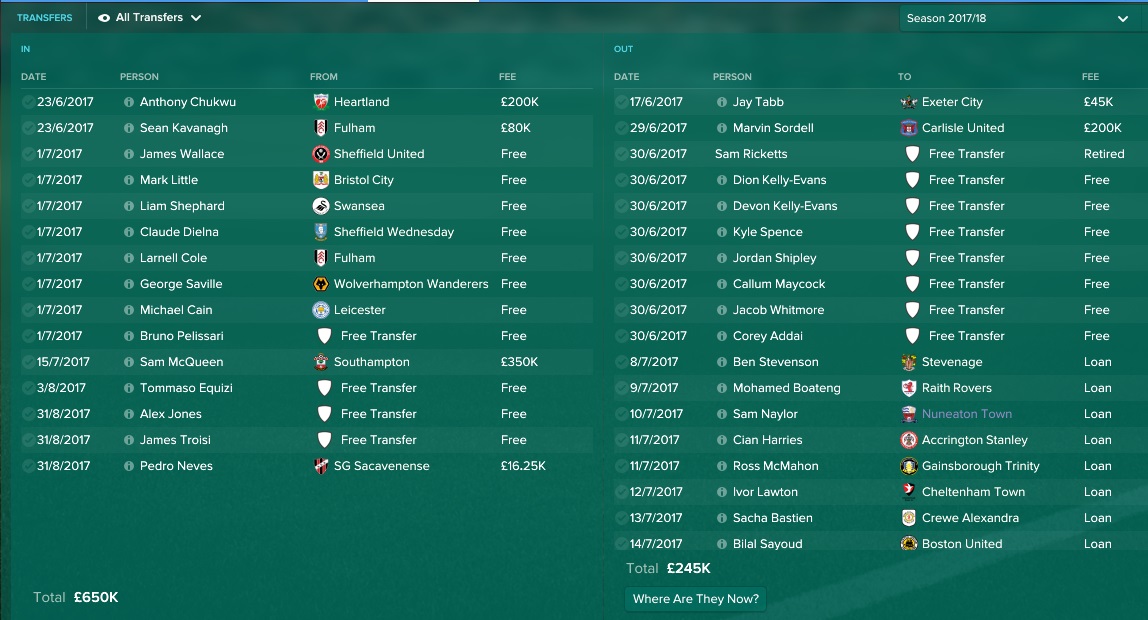 Out of Contract signings


Out (not including released)

Though I really wanted a better RM to bring it, I did need depth so I am happy bringing in Cole to warm the bench. It was a really long and hard thought transfer window and I am realy happy with the players I got in. Especially as the likes of Troisi and Pelissari came in on frees and are worth in the 1M plus range!

I am happy that everyone has upgraded the squad to a point, and the young guys I brought in will hopefully become decent future players to. I am particularly happy with the Pelissari signing!

Well there you go. All the dealings….lets get into the start of the season then?
Login to Quote

Lumix
4 years
Well done on the promotion. Tough season you had. Hopefully all your new players will settle quickly to help you stay up. Good luck
Login to Quote

ianbrown
3 years
Iam doing the same save i managed to blag promotion just going up in second place. Have a look in Ireland there is some right bargains to be had. good on you though
Login to Quote

You are reading "The Coventry City Story".