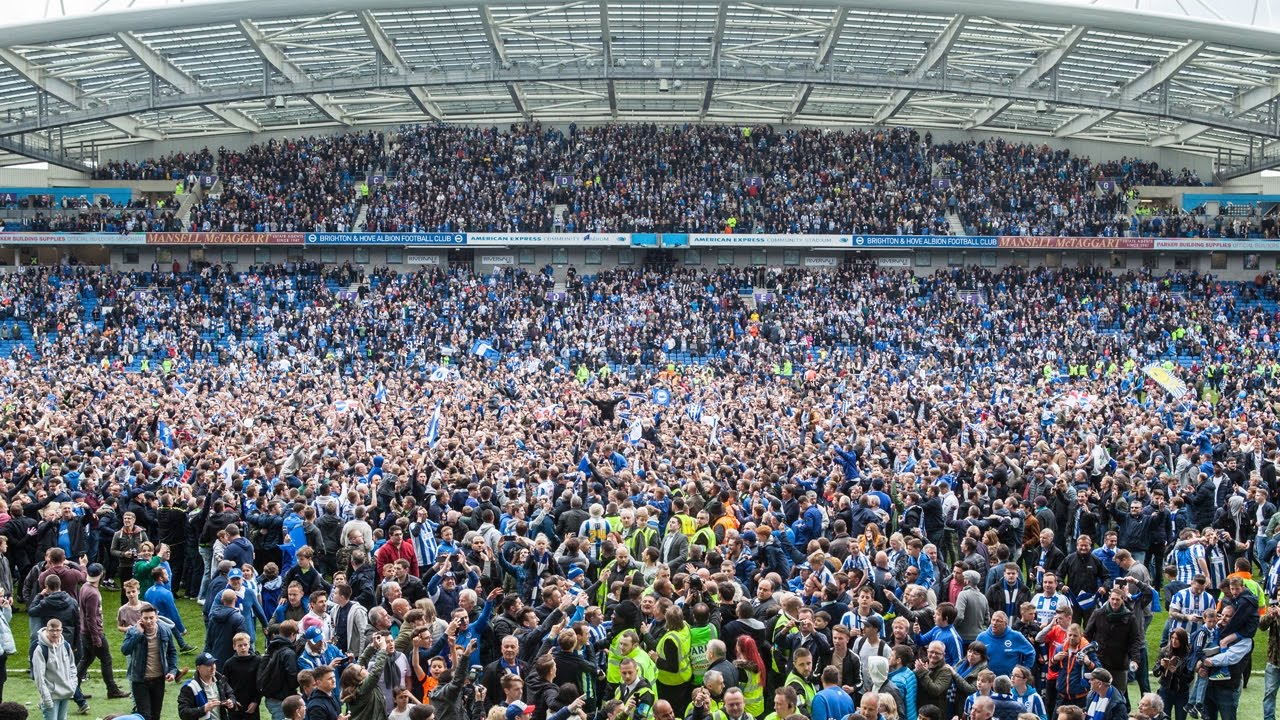 Brighton & Hove Albion Football Club is a professional football club based in the city of Brighton and Hove, East Sussex, England. They will make their Premier League debut in the 2017–18 season after sealing automatic promotion from the EFL Championship. Brighton's home ground is the 30,750-capacity Falmer Stadium, known for sponsorship purposes as the American Express Community Stadium, or simply the Amex.

Founded in 1901, and nicknamed the "Seagulls" or "Albion", Brighton played their early professional football in the Southern League before being elected to the Football League in 1920. The club enjoyed greatest prominence between 1979 and 1983 when they played in the First Division and reached the 1983 FA Cup Final, losing to Manchester United after a replay. They were relegated from the top division in the same season.

Mismanagement brought Brighton close to relegation from the Football League to the Conference which they narrowly avoided in 1997 and 1998. A boardroom takeover saved Brighton from liquidation, and following successive promotions they returned to the second tier of English football in 2002, from then on playing in the second and third tiers of English football until the conclusion of the 2016–17 season, where the club earned promotion to the Premier League for the first time in their history, marking the end of a 34-year absence from the top flight.

After making his professional debut aged 20, Hughton spent most of his playing career with Tottenham Hotspur as a left back, leaving in 1990 after 13 years. After relatively brief spells with West Ham United and Brentford, Hughton retired from playing in 1993 at age 34. He earned 53 caps representing the Republic of Ireland, scoring one goal and starting in all three of Ireland's games at UEFA Euro 1988 in West Germany.

From 1993 to 2007, Hughton served as coach and then assistant manager for Tottenham. He joined Newcastle United as first team coach in 2008, and, following their relegation, became caretaker manager. He led Newcastle back to the Premier League in his first season in charge, along the way breaking a number of records and securing the permanent managerial position. He was sacked as manager by Mike Ashley the following December, with his side 12th in the table. Hughton managed Birmingham City for a single season, leading them to fourth place in the league, before joining Norwich City in June 2012. Norwich sacked Hughton in April 2014.

Following his departure from Norwich, Hughton became manager of Brighton & Hove Albion midway through the 2014–15 Championship season, securing the club's safety within the division. In the following 2015–16 season, Hughton guided Brighton to an impressive third-placed finish, narrowly missing out on promotion to the Premier League through an inferior goal difference of two goals. Brighton would go one step further in the following season under Hughton's management, earning promotion to the Premier League for the first time in their history, and returning to the top flight of English football for the first time since 1983.

Aaron
2 years
Exciting stuff! i hope you can take brighton far, a favorite of mine!
Login to Quote

ScottT
2 years
Brighton are certainly a club who are just aiming to survive in the top flight you'd imagine so if you can deliver that, job done! Anything extra is a bonus.
Login to Quote

You are reading "Good Ol' Sussex By The Sea".