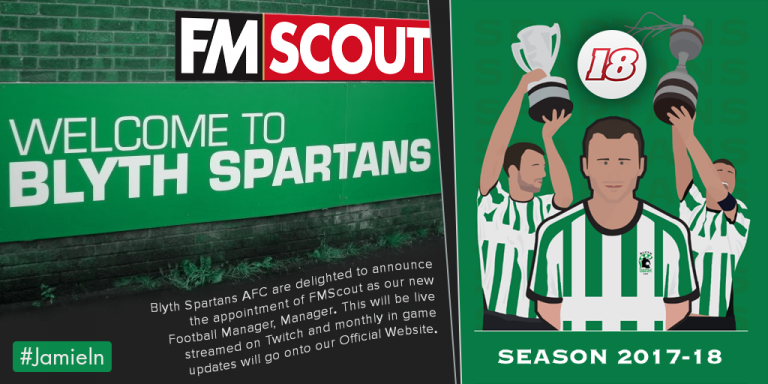 Blyth Spartans today are delighted to announce a partnership with the popular blog site FMScout as their new manager on the video game Football Manager, with the 27-year-old boasting experience at Whitehawk and FC United of Manchester. We caught up with him to have a chat ahead of him taking the reigns at the virtual Croft Park.

FM Scout, thanks for having a chat with us. There must be a keen sense of anticipation working in your new surroundings here in Blyth. How’s the move been, and what are your first impressions at the club?

My first impression is that I’m stepping into an ambitious football club. We want to become a Football League club, and after promotion last season it’s vital that I try and mould a team to continue working our way up the leagues. It’s certainly going to take lots of late nights and hard work.

You have a lot of experience in lower league management, taking charge of Whitehawk and FC United of Manchester in the past. How have these experiences equipped you in taking over at the Spartans?

I’ve learned to keep things simple in the lower leagues, because once you start over complicating the tactics it becomes difficult. Developing good relationships with other managers in the leagues above is also important, as the loan deals are a significant part of the set up and will continue to be significant as we move up the leagues. There are talented and keen 18 year olds willing to drop down to this level and prove themselves. Lastly, it’s imperative to not overspend because we know unless we get an FA Cup run it isn’t going to help us the season after.T here isn’t much money floating around in the lower depths of English football.

Are you confident of immediate success at Croft Park or will it take time for the team to work their way into a position to be promoted?

With us only just being promoted, it’s important for us to have a good first season in the league. Having spoken to the chairman he’s happy with a mid table finish this year and a promotion push next year. The players also feel the same. As a manager I’ll be aiming to finish as high as we possibly can. I’m aiming for a play off position in the first season if we can find the right players.

On the subject of the right players, have you identified any transfer targets that can add something to the squad?

I’ve got my eyes on a few players. The tactic I operate with will mean certain players will unfortunately be surplus to requirements. I can reveal that I’ll be dipping into the loan market to get some players from higher leagues, as long as they’re willing to give 110%.

Thank you for taking time out of your now busy schedule to talk to us. Best of luck for the season ahead.

InvertedWingbacks
3 years
Congrats on getting chosen to write this dude! Looking forward to it, it's certainly a unique idea! Brilliant start too
Login to Quote

You are reading "Blyth Spartans: An FM Scout Chronicle".